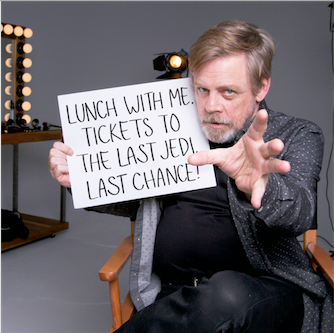 Mark Hamill proves once again that he’s one of the best people on the planet as he surprises Star Wars fans as part of the announcement for the newest Star Wars: Force For Change Omaze campaign.

In addition to giving some diehard Star Wars figure and collectibles fans the chance to perform some of their favorite Star Wars moments with him, Hamill is introducing a newly added prize to the Star Wars: Past, Present, and Future campaign to benefit UNICEF and Starlight Children’s Foundation.

If you enter this week at Omaze.com/StarWars, you could win a special bonus prize that includes lunch in Los Angeles with Hamill and two tickets to a pre-screening of Star Wars: The Last Jedi.


May the Force be with you!