Spider-Man has a lot of super-human powers in the Marvel Cinematic Universe: strength, speed, agility … and pop culture references. Because, in the wise words of Tony Stark, the kid’s seen more movies than any extraterrestrial foes.

While Peter is already intelligent, his arsenal of geeky film knowledge has given him an ingenious tactical advantage many times. His quips are also just amazingly funny and relatable. Let’s take a look at some of Peter Parker’s best pop culture references in the MCU.

“Hey guys, you ever see that really old movie, Empire Strikes Back™?”

Peter Parker is a huge nerd. That’s made abundantly clear in his introductory Marvel movie, Captain America: Civil War. Peter rejects a super hero mission because he has homework, shows off the strength of his homemade web-shooting tech, and uses a pop culture reference to defeat Ant-Man.

After Scott Lang uses his quantum powers to become Giant Man, Team Iron Man is at a loss for how to combat him. Spider-Man, however, has a bright idea. He shares it in a reference to Star Wars™, bringing to mind the image of Luke Skywalker™ as he trips an AT-AT™. Spider-Man uses his webs to achieve the same result against Giant Man’s colossal legs, briefly turning the tide during their airport battle. 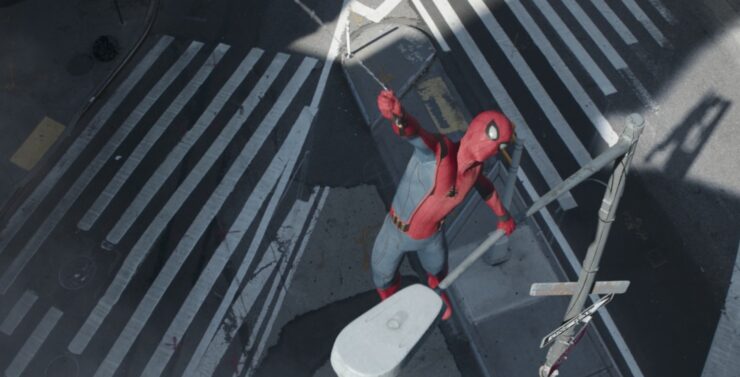 At the start of Avengers: Infinity War, Thanos’ Black Order invades Earth. Spider-Man leaps out of his school bus to aide civilians and ends up assisting Doctor Strange and Iron Man as they guard the Time Stone. Peter’s still a young hero, however — his unrefined skills and underdeveloped powers are no match for super-villains of such caliber. A well-intentioned rescue attempt goes wrong and Peter is transported onto the Black Order’s spaceship after making a quick Star Trek reference.

“Okay, you ever see this really old movie Aliens?” 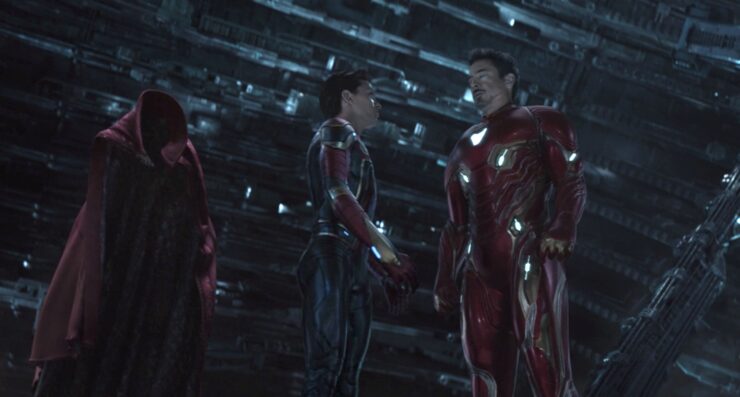 Aboard the Black Order’s craft, and hurtling farther and farther away from the planet they call home, Iron Man, Doctor Strange, Doctor Strange’s Cloak of Levitation, and Spider-Man are out of options — or ideas, really — for how to defeat their captor. But Peter Parker is excitedly flipping through his internal geeky film archive.

What does he come up with? Aliens, a sci-fi and horror cult classic where the heroine, Ellen Ripley, sends a Xenomorph into space through a hole blasted in the ship’s hull. And that’s exactly how Earth’s Mightiest Heroes get rid of Ebony Maw.

“Please don’t put your eggs in me!” 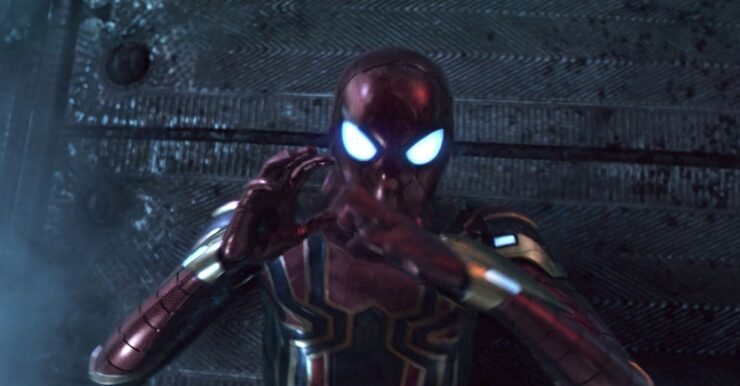 Peter stays on his Aliens kick for a long time. after crash landing on Titan and just before the Guardians of the Galaxy blast their way onto the ship, Peter Parker tells Stephen and Tony that he doesn’t want any eggs implanted in his chest. Tony, frustrated with Peter’s antics, tells him to quit it with the pop culture references for the rest of the trip. Then, everything explodes. Literally.

Forced into another fight, the Avenging trio finally meet the Guardians. Spider-Man is pretty freaked out by Mantis, an empath with antennas and a curious disposition. Scrambling away from her glowing form, Spider-Man shouts out in fear, asking not to be implanted with alien eggs. It’s silly, dramatic, and fully on-brand for the Spiderling. 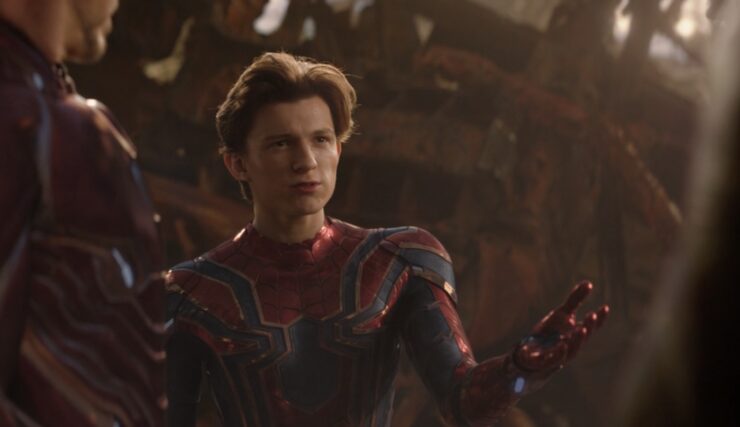 Star-Lord famously bested Ronan the Accuser with a dance-off, and he’s been riding that high ever since. While the Avengers and Guardians brainstorm ways to take down the Mad Titan, all plans are welcome. Star-Lord, then, tells everybody what worked for him before.

Tony Stark rolls his eyes, and Peter Parker — somewhat unfairly, given how many of his successful plans are pop-culture based — calls Star-Lord on his reference. Star-Lord proudly answers that it’s exactly like Footloose, but none of the other Earth inhabitants are impressed. 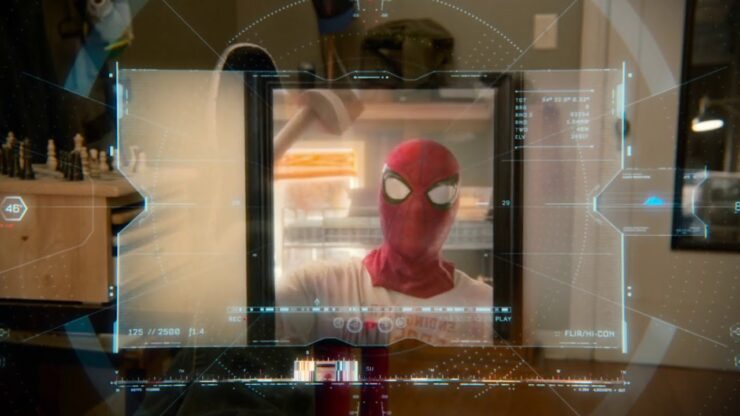 This one is kind of meta, but Thor is technically a pop culture icon in Peter Parker’s universe. And as a fanboy and nerd, it’s only natural that Peter Parker admires the Avengers to the point of impressions. In Spider-Man: Homecoming, then, Peter’s suit A.I., Karen, keeps tabs on the kid for Tony Stark. Part of that protocol means video recording anything Peter sees while masked up as Spider-Man.

Pulling up the footage, Karen flips to a time when Peter put on his best Asgardian accent and pretended to wield Thor’s hammer Mjolnir. Peter is embarrassed, telling her to scroll past that one. But the reference has been made, and we’re endeared once more by this relatable teen. 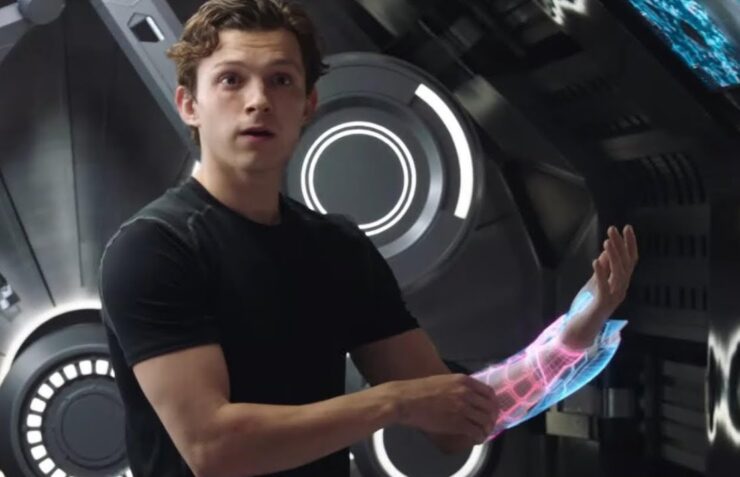 In Spider-Man: Far From Home, Peter Parker is dealing with the death of his mentor, Tony Stark. He’s working through that emotional trauma with his usual chipper attitude and optimism, but it’s still a big deal when Happy Hogan brings him back into the big leagues and gives him access to advanced Stark tech.

On a lab/jet, Peter Parker is given free rein to upgrade his suit in order to defeat Mysterio. Happy is obviously reminded of his time with Tony. Thus, he thinks a jam session is in order. He cranks up some AC/DC, but Peter Parker names the wrong band. Oh, Peter. Happy’s fond yet exasperated expression says it all.

“Do you guys not have horror movies in Wakanda?”

Although not a reference to any specific film, Spider-Man’s frequent mentions of horror movie “rules” and tropes in this horror-comedy episode of What If…? fits this pop culture junkie character. His behavior is also reminiscent of Randy from the Scream franchise, who survives the murder spree of two teens because he lives by horror movie rules. And at the end of this gore-fest, Peter Parker is one of the only Avengers left standing — or floating, if you count Scott Lang’s disembodied cranium. So all signs point to film geeks having the ace up their sleeves in any survival situation.

Which of these Peter Parker quotes is your favorite? Let us know in the comments, and don’t forget to Let Your Geek Sideshow!