Why? Because You’re Worthy! 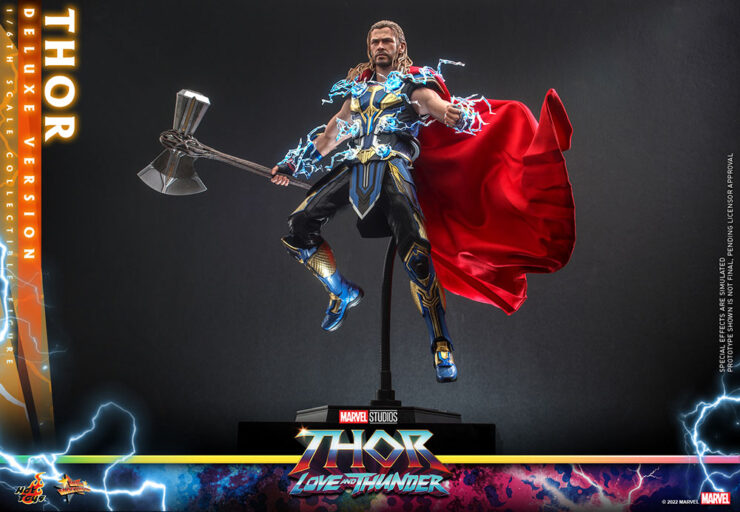 With a clap of thunder and a surge of lightning, Thor Odinson faces every battle head on, no matter the circumstances. He is known for his bravery and kind heart, as well as his enthusiastic love of refreshing beverages. In his latest Marvel Cinematic Universe outing, Thor: Love and Thunder, Thor faces Gorr the God Butcher and learns he isn’t the only one worthy of wielding Mjolnir. It’s always awkward to see your ex-weapon, but that’s all in a day’s work for yet another classic Thor adventure.

From the bright red of his cape to his long flowing locks, Thor’s appearance is instantly recognizable even as his character evolves over the years. His Marvel comics design will always be iconic and his various MCU makeovers prove the God of Thunder knows how to take an audience by storm. Bestow the thunderous power of Asgard upon your collection with these Thor collectibles. Ready to ship to you now, pick them up now — if you be worthy! 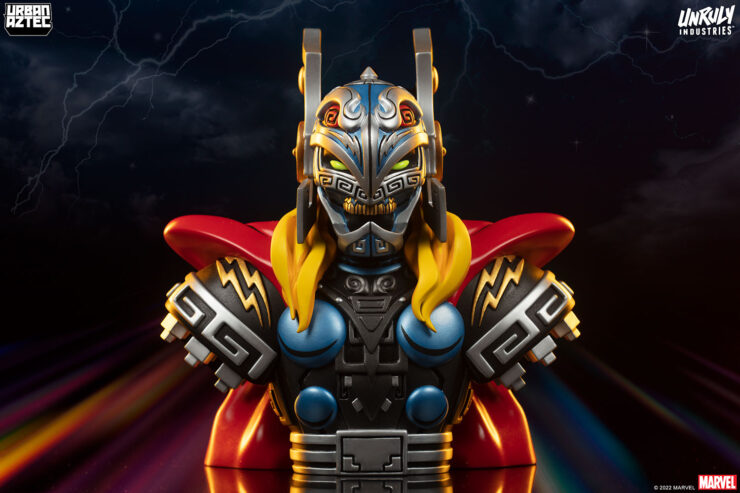 From ancient ruins to ancient runes, Jesse Hernandez, AKA Urban Aztec, lends his signature style to this designer collectible bust. Combining elements of Aztec and Maya design with the Asgardian god’s iconic armor, helmet, and cape, the Thundering Eagle has the might of the heavens behind him. Bold colors, ancient symbols, and a fearsome grin adorn this thunderous titan of the storms. Verily, he is a most unique Thor for your shelf! 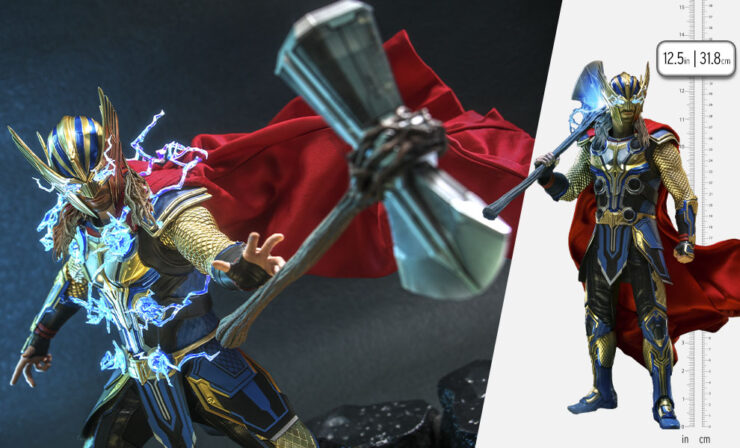 He was no ordinary collectible.

Let us tell you the legend of Thor, the space viking. The Thunderer’s latest cinematic armor is captured in exquisite detail in Hot Toys’ newest Thor: Love and Thunder Deluxe Edition Sixth Scale Figure. From the poseable, billowing red cape to the crackling Asgardian blue-and-gold armor, this Thor is ready to face whatever evil stands in his way. And although he believes his days of heroing are over, he comes with Stormbreaker and his hands, which are tools of peace. If you’re unsure of what to add your collection next, choose love! 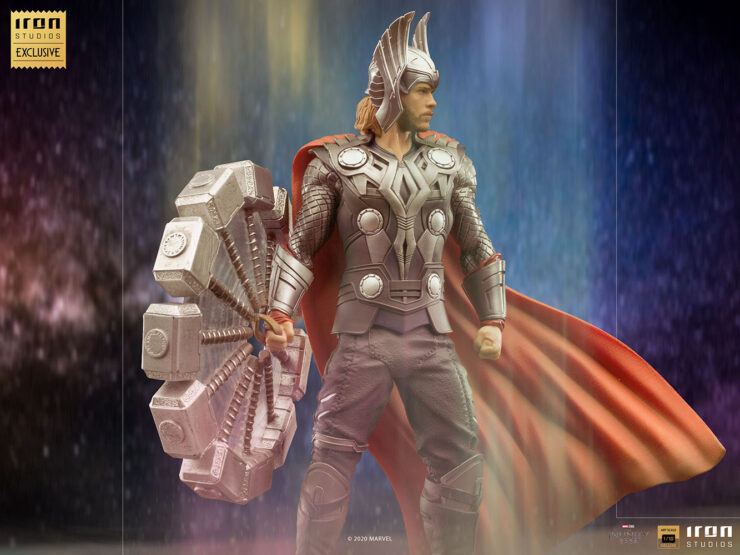 Where the saga all started.

Capturing Thor’s first appearance in the Marvel Cinematic Universe, the Thor Deluxe 1:10 Scale Statue by Iron Studios is a tribute to the thunder god’s picturesque power. As he stands firmly atop an Asgardian rune design left behind by the Bifrost, Thor swings Mjolnir into its powerful blurred orbit, perfect for flying across the sky or sending an enemy packing. He also comes with a hand holding just one Mjolnir, ready for combat. If you loved the original helmet and the origins of the thunder, this is the statue for you! 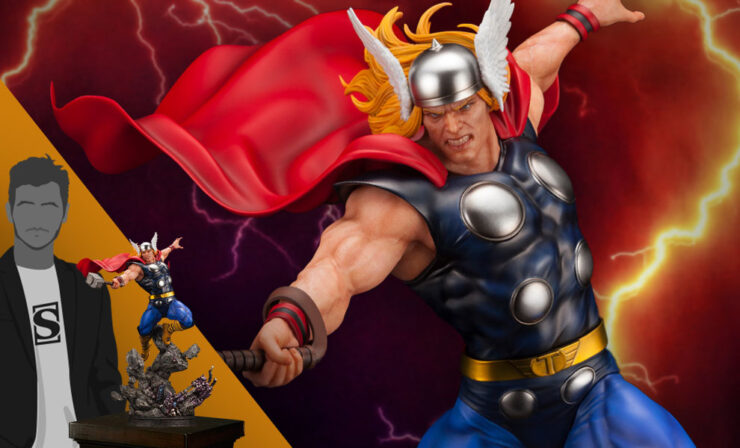 Get hammered with Thor.

With a face like thunder and the massive muscles to back it up, this Thor Fine Art Statue by Kotobukiya will bring the power to your collection. Based on his classic look from the pages of Marvel comics, Thor is finely chiseled down to every straining muscle as he swings Mjolnir and leaps into the fray. He measures nearly 18″ tall in his dynamic, flying stance. From the feathered helmet to the yellow boots, you’ll take your collection on a Journey into Mystery with this throwback Thor. 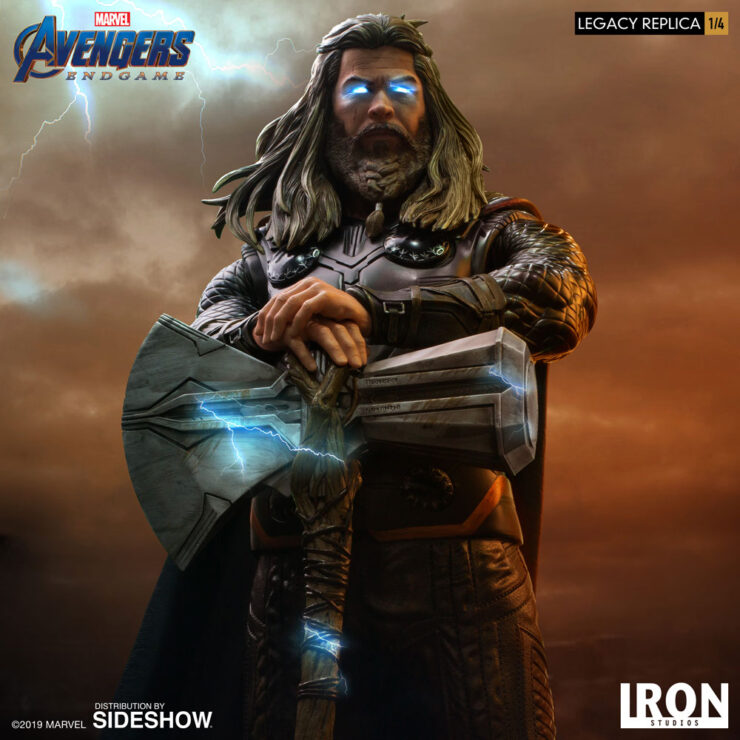 Sure, muscles are great and all, but there’s something special about Thor’s Endgame appearance. Still just as powerful but with a little extra thunder in his thighs, the Thor 1:4 Scale Statue by Iron Studios captures the Avenger’s beloved look from the end of the Infinity Saga. The sculpt is impressive and comes with Stormbreaker and Mjolnir. Most importantly, no matter the hardship he’s faced, he’s still worthy. Thor is ready to fight and also ready to kick back with Korg and Miek — the best of both realms. 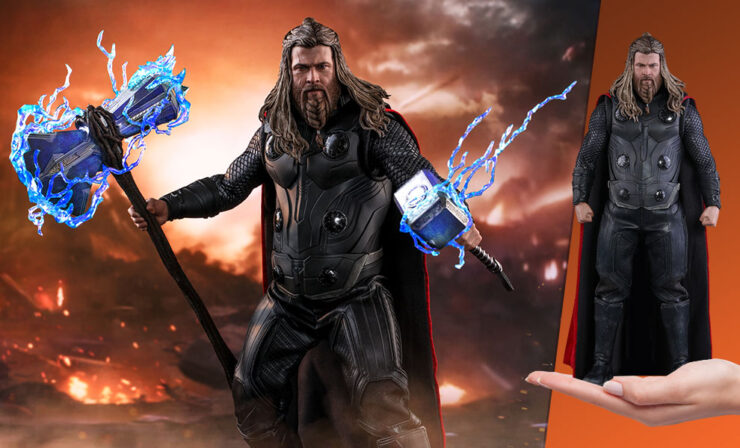 In the fight against Thanos, nobody is stealing Thor’s thunder. Though he might have underestimated the Mad Titan the first time around, with Stormbreaker and Mjolnir in his grasp he is ready for battle! This articulated Thor Sixth Scale Figure from Avengers: Endgame recreates every detail from the gripping climax of the Infinity Saga. His weapons come with lightning effects as well as light-up features. All that’s missing is Thanos’ head.

The God of Thunder never fails to prove his worthiness. Though he occasionally loses his way (and maybe his physique), his heart is always in the right place. And a well-forged hammer is never far behind. Cue Led Zeppelin. Don’t miss these and other exciting Thor figures ready to ship straight to you at Sideshow.com. (Bifrost instant delivery not currently available.) 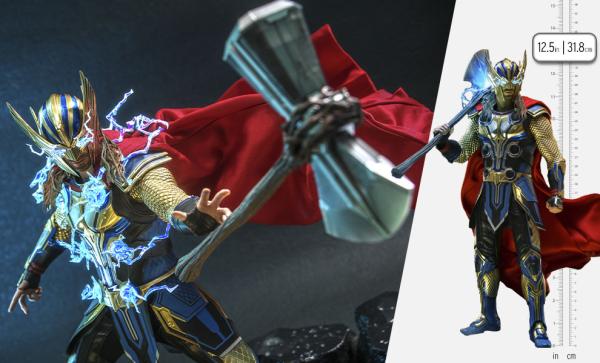 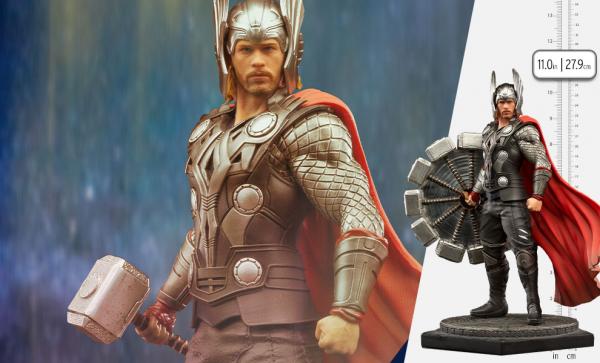 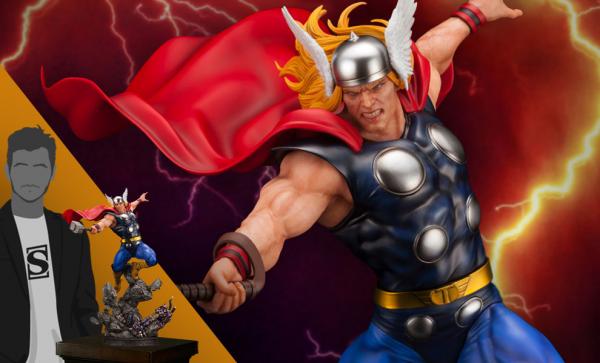 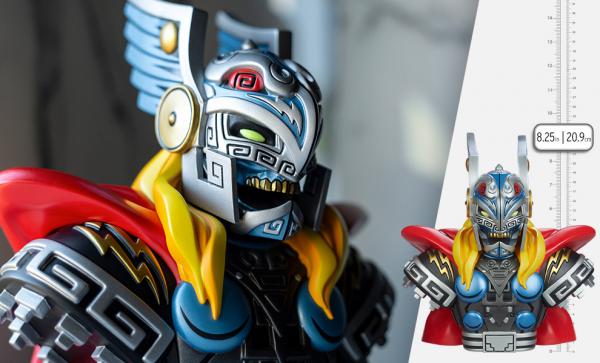 The Many Mjolnirs of the Thor Mythos