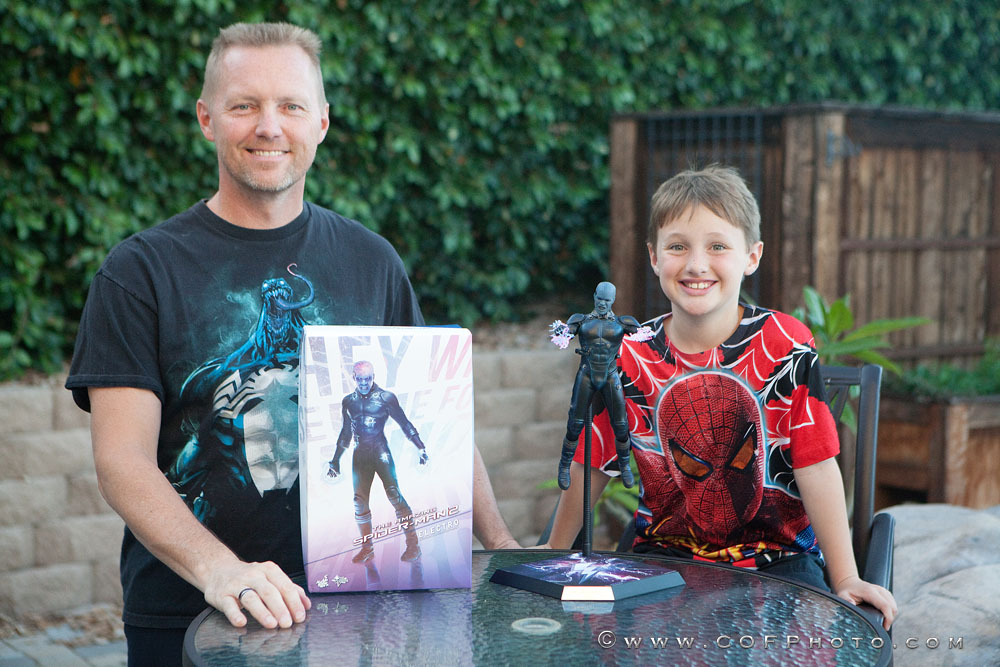 “This one is MINE.” Believe it or not, my 9 year old son collects Hot Toys. Good parenting, bad parenting? I’ve heard both. When Gavin and I started doing reviews for Sideshow, I told him that this was going to be his first job, and that he would get paid for his hard work with an occasional figure for his own collection. And although the Hot Toys Electro figure would have looked great alongside my Spider-Man, New Goblin, Black Spidey, custom Doc Ock and Venom figures, the second Gavin saw the box for Electro, those were his words – “This one is MINE.” (I said “deal,” and his eyes lit up like Christmas.) 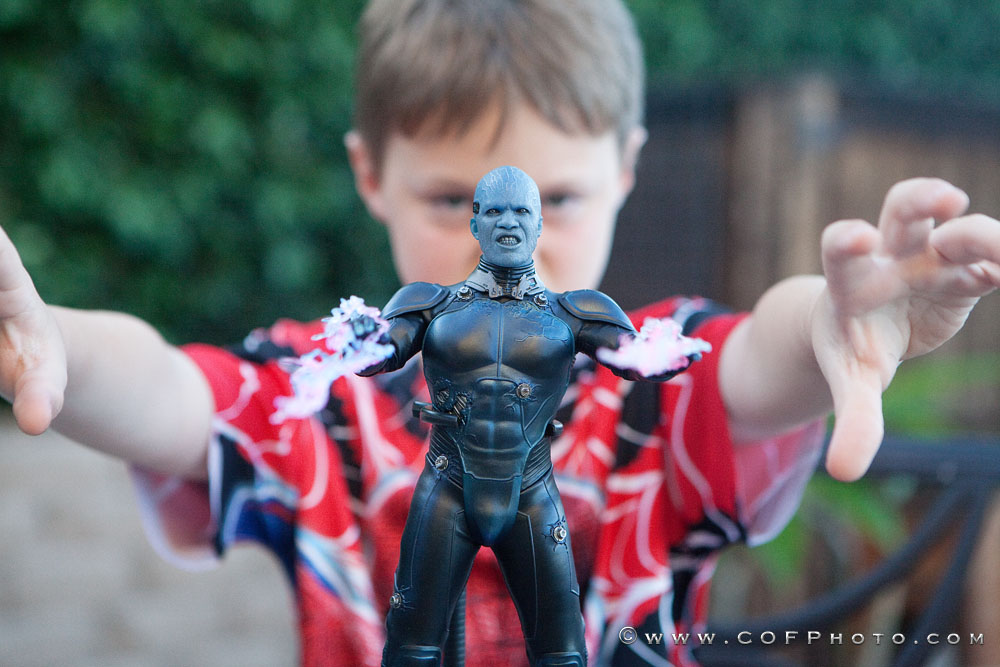 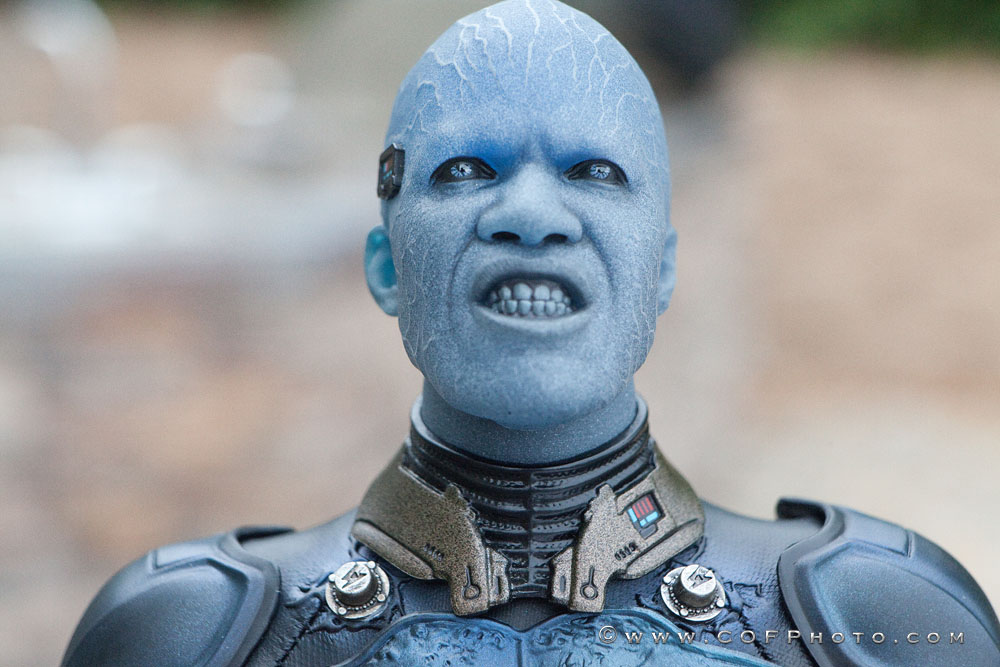 Hot Toys’ Electro is an amazing replica of the villain played by Jamie Foxx in Marvel’s Amazing Spiderman 2. As they often do, Hot Toys nailed the portrait on this figure. He’s got a wicked snarl, perfect for posing him in aggressive battle scenes. 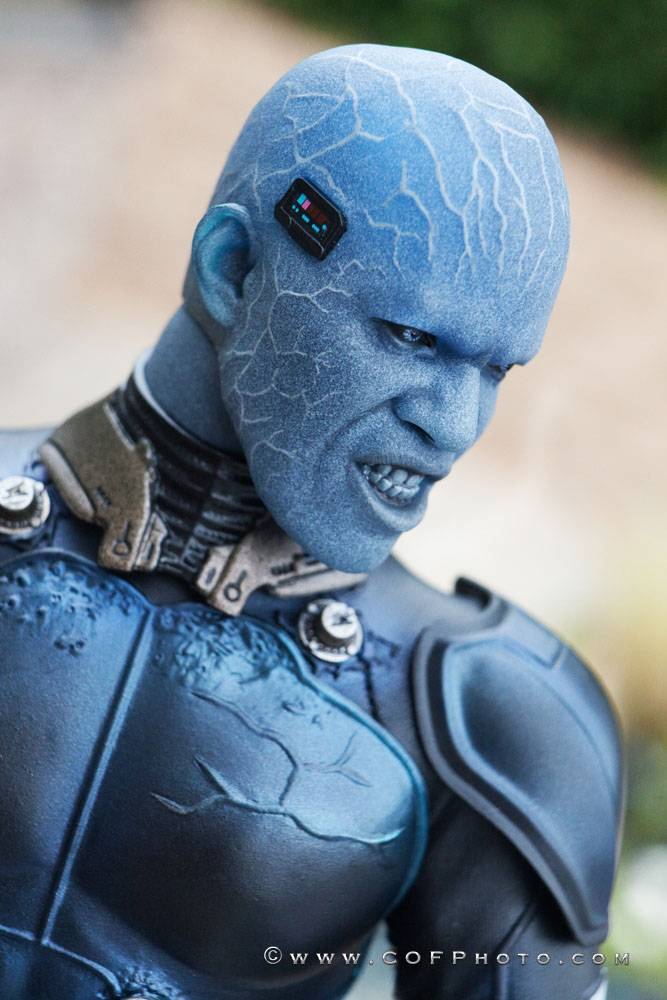 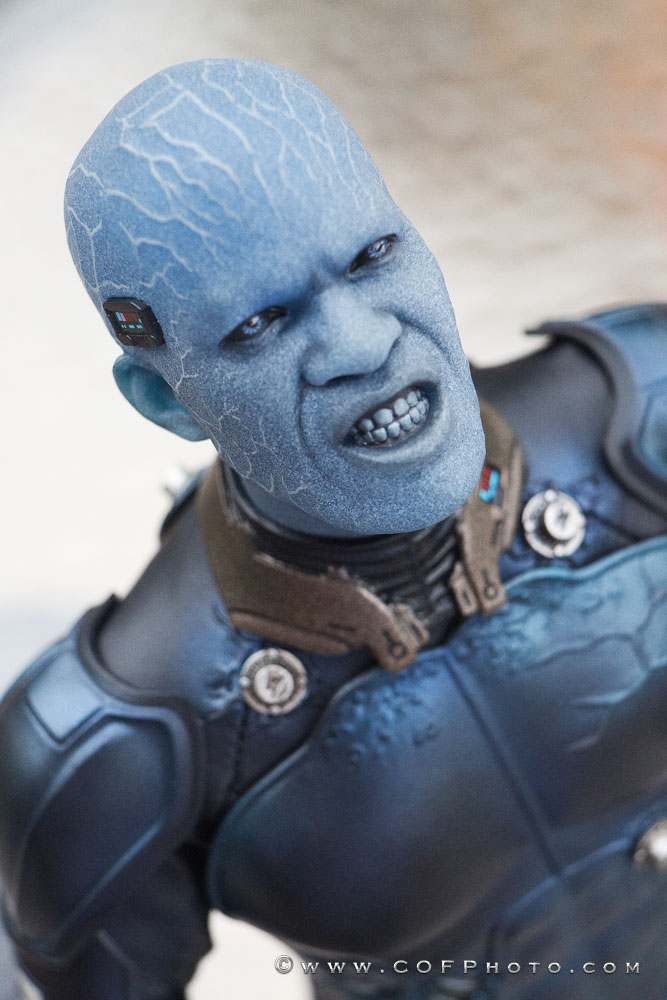 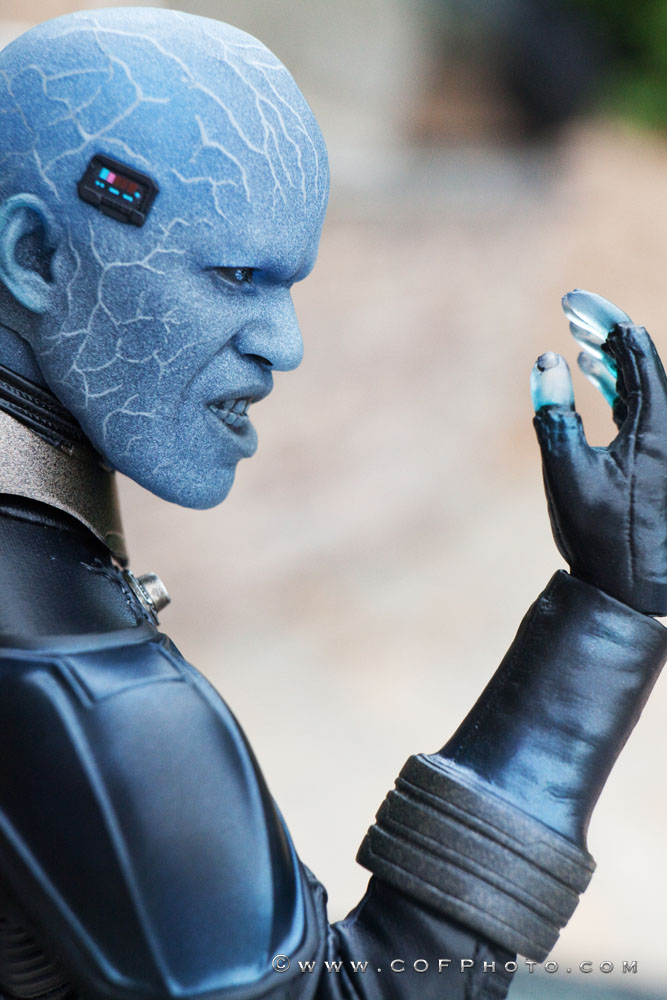 There’s an insane amount of detail on the suit. There are lightning bolts on both sides, multiple power meters, and what appear to be electrical conducting nodes all over his body. Gavin theorized that those were used to capture electricity from the air, so that Electro could fire blasts of energy from his hands. 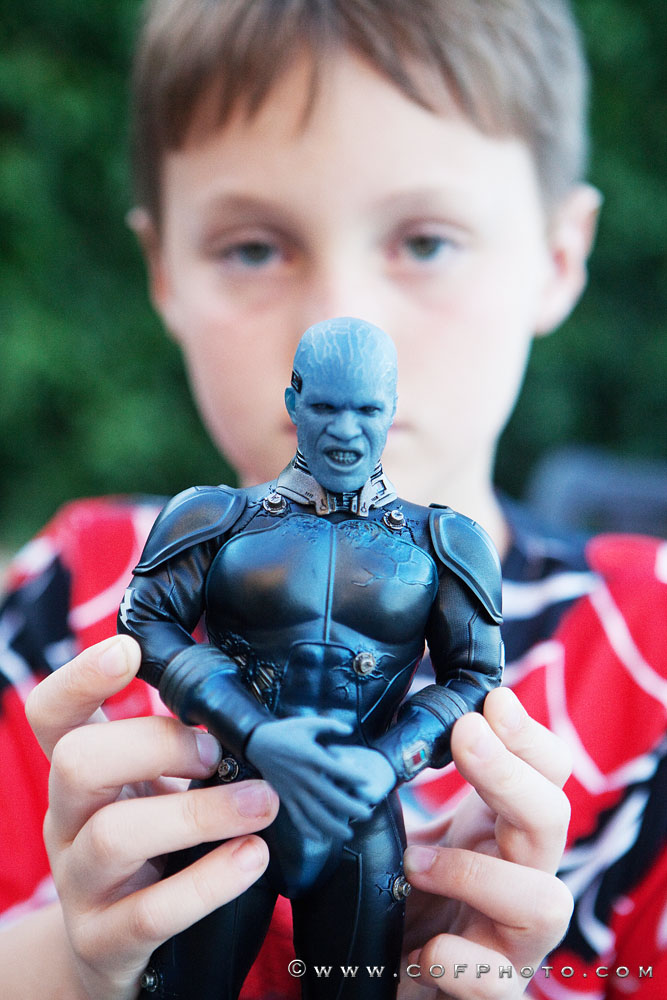 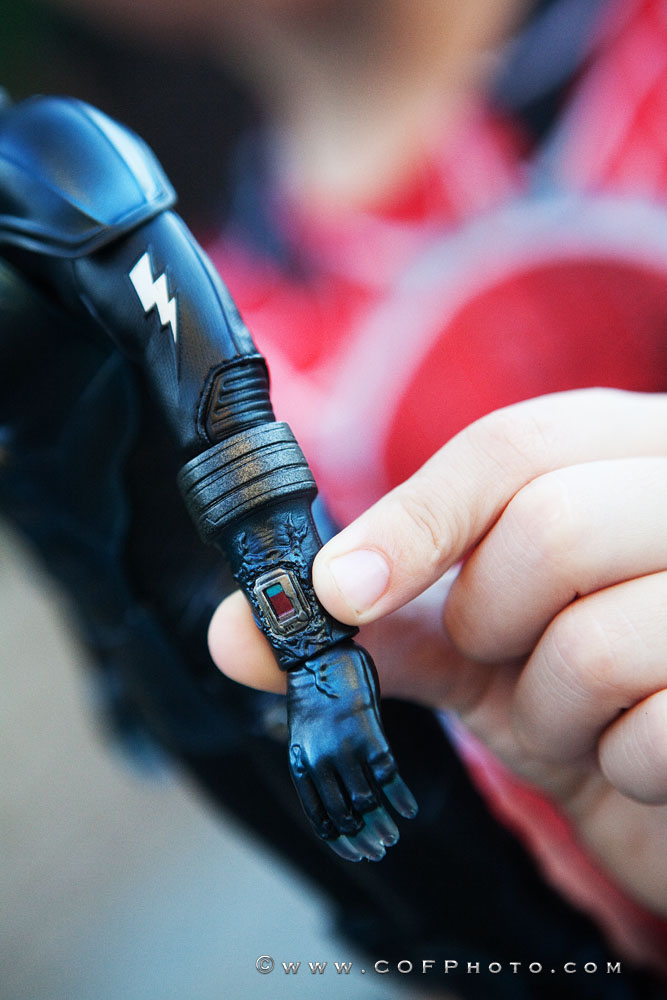 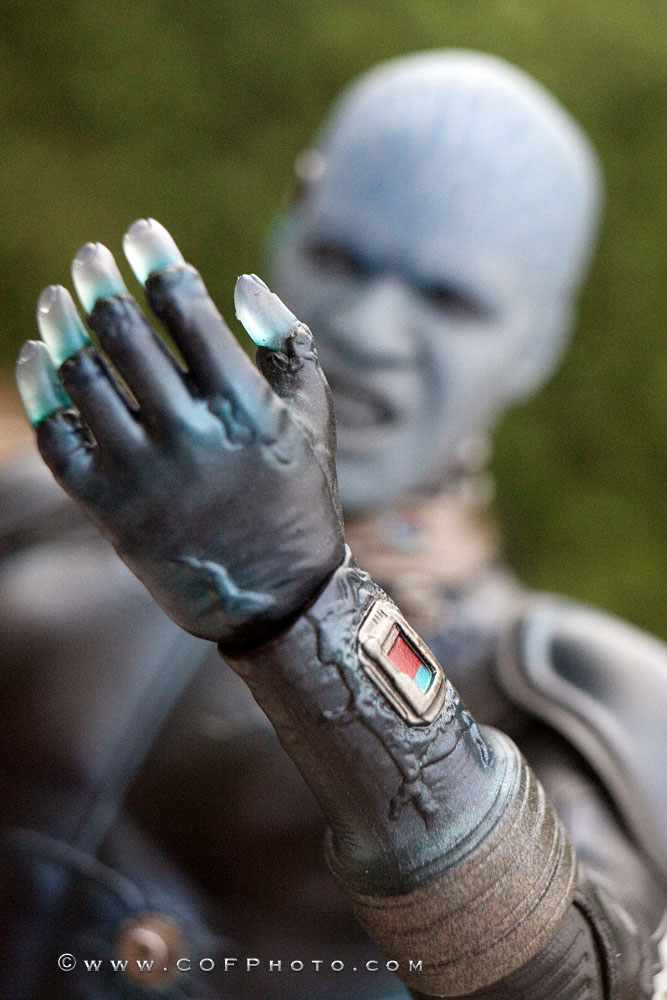 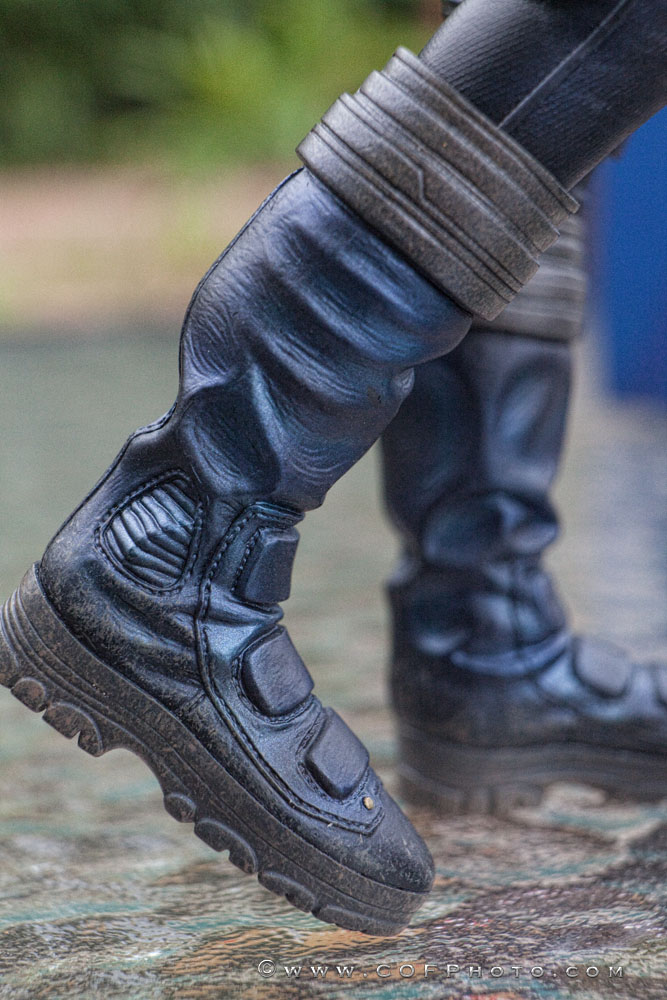 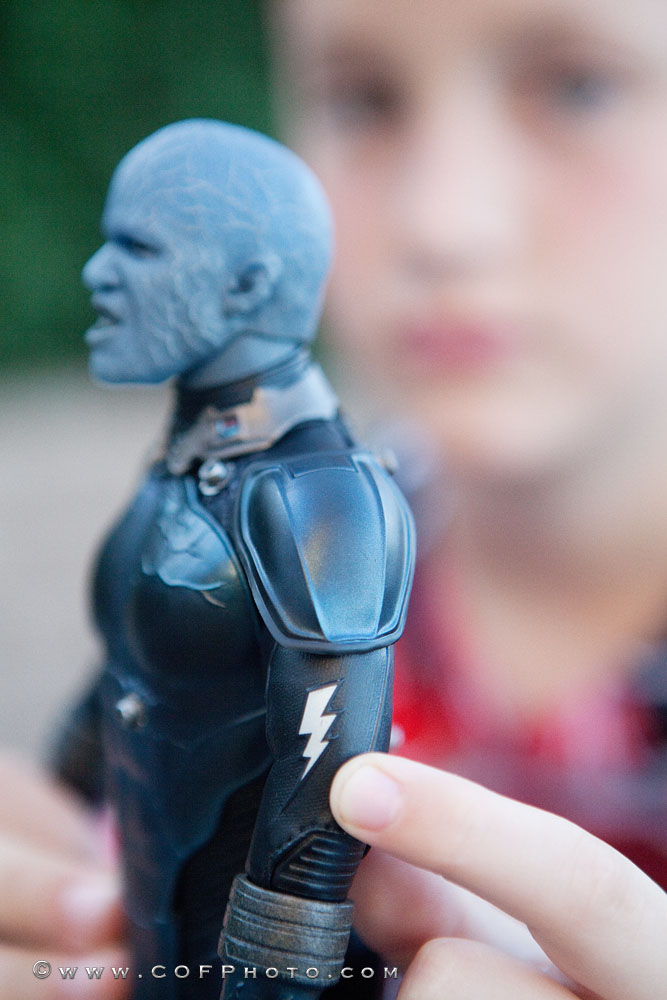 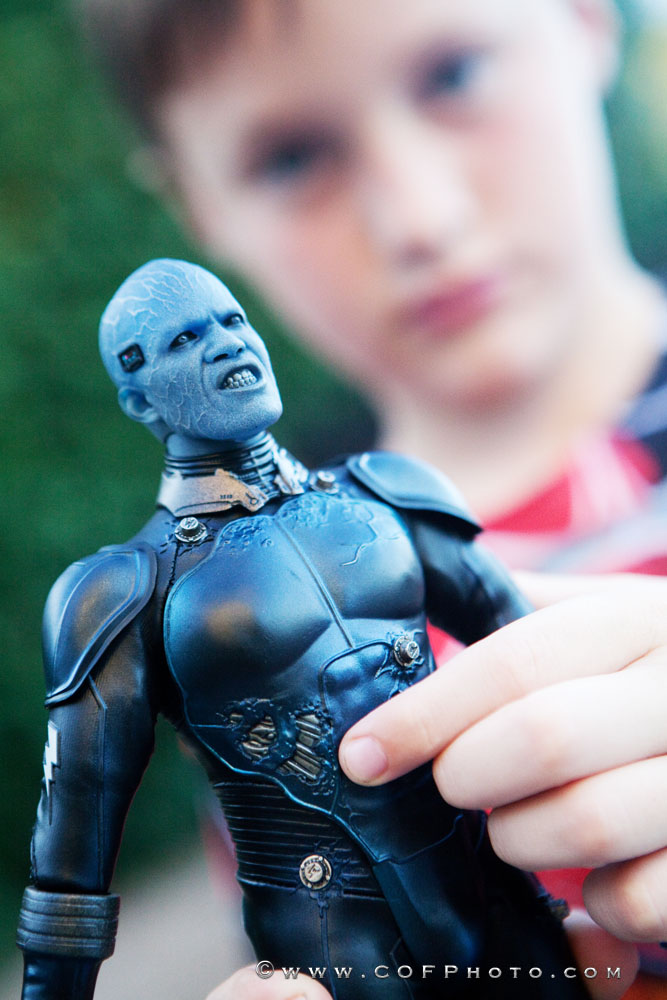 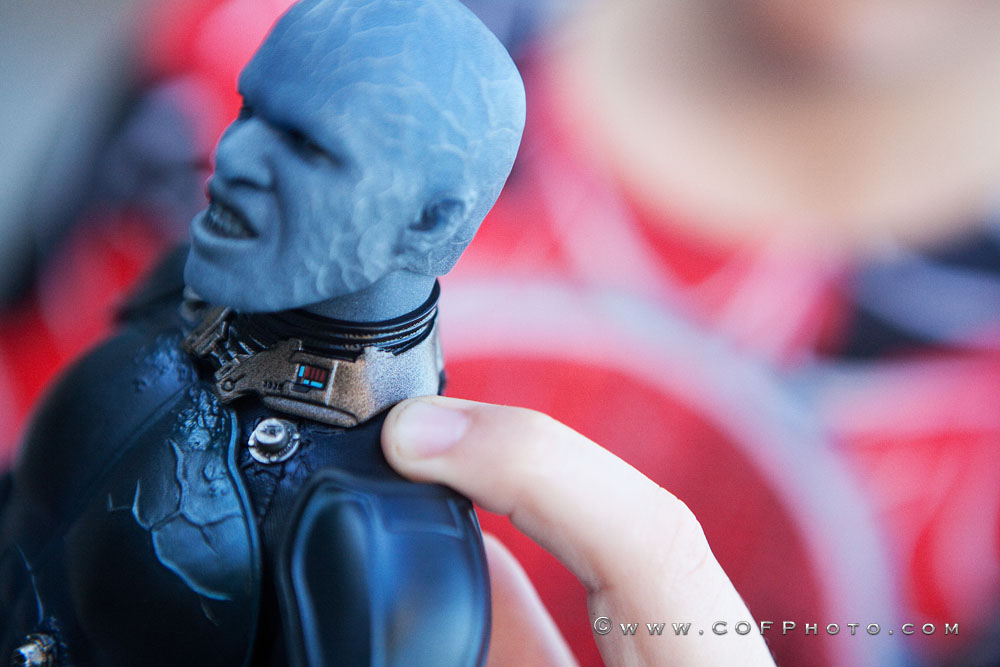 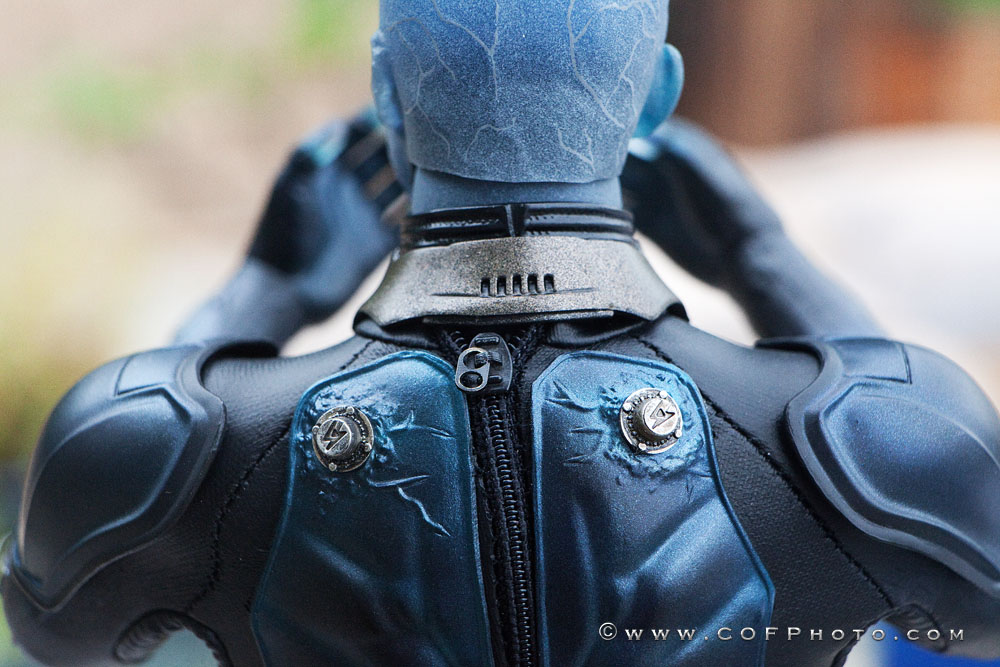 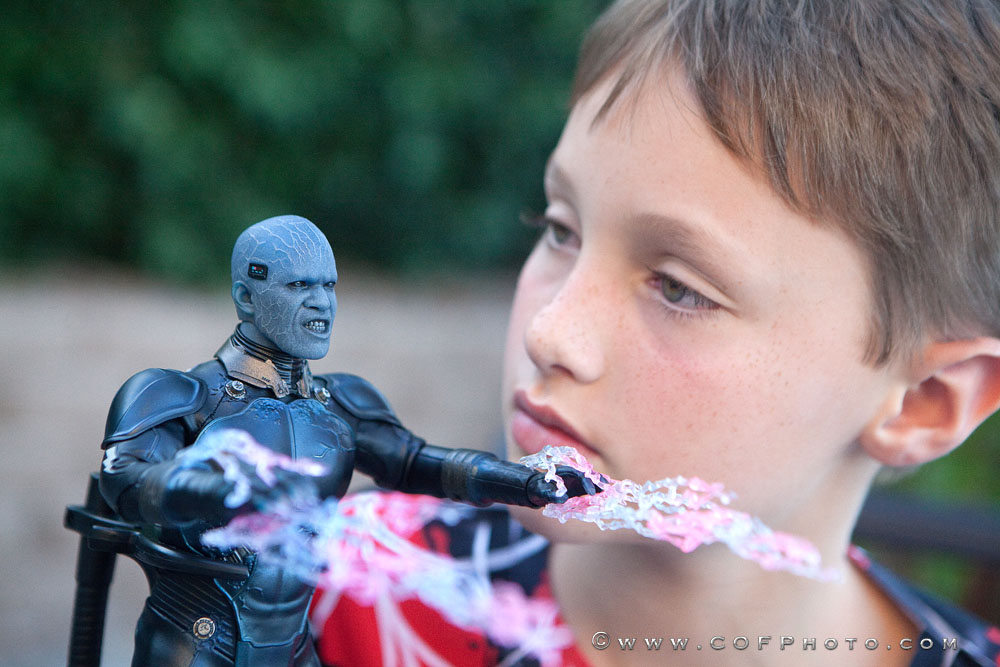 Gavin borrowed my Spider-Man figure to do some quick action snapshots. He loves villains so I’m pretty sure in his battle, Spidey was not victorious. If only we had a sixth scale Gwen Stacy trained in resetting the electrical grid, Spidey may have had a chance… 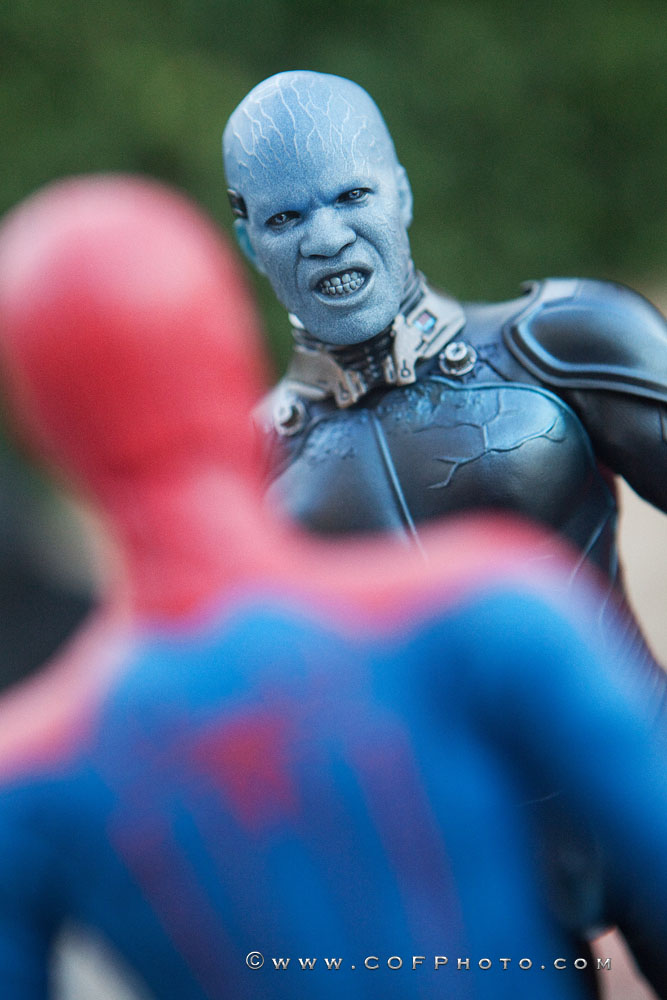 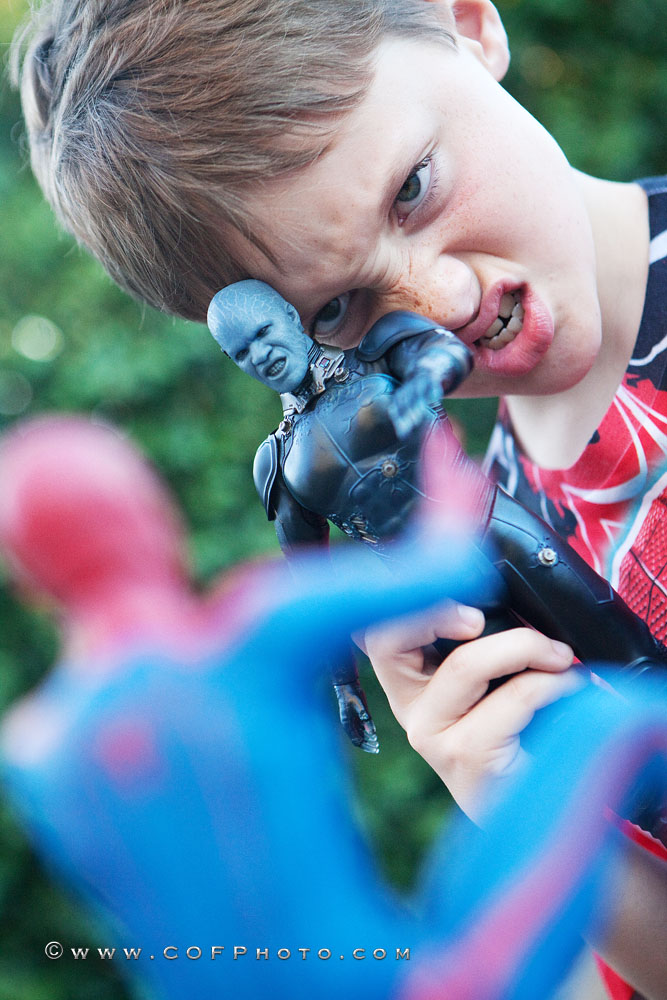 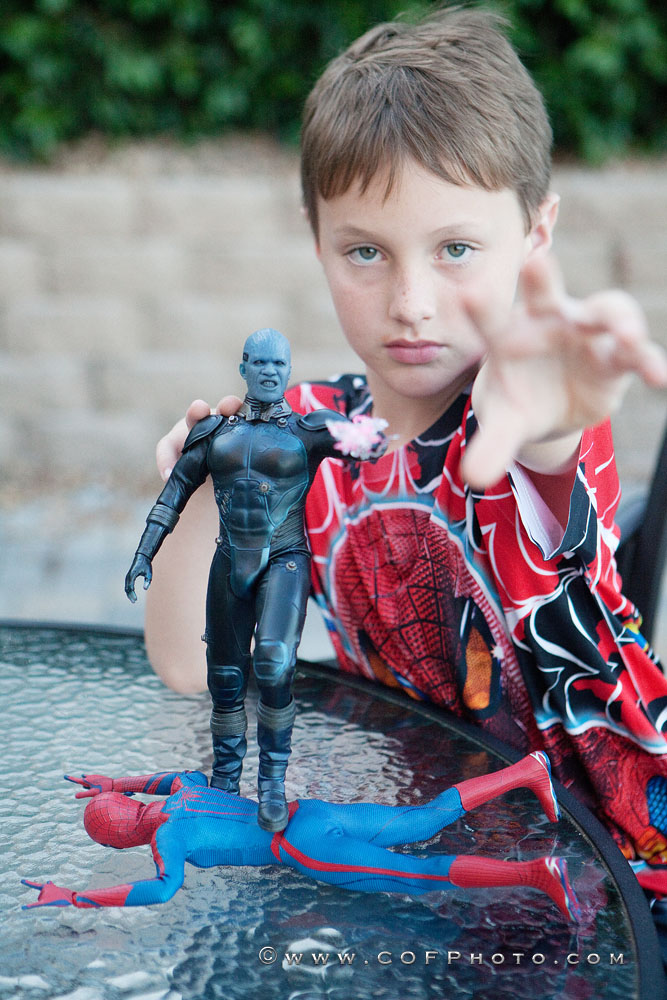 Speaking of blasts of energy, the Electro figure comes with two pairs of lightning bolts of different lengths that slip over his hands. Even cooler, his head and parts of his hands are made of transparent material that lights up, which looks pretty wicked in the dark.

The dynamic stand allows for a pretty cool flying pose (which happens to be how Gavin now has the figure displayed in his room with the rest of his collection). The base also has a cool graphic display and shiny metal name plate. 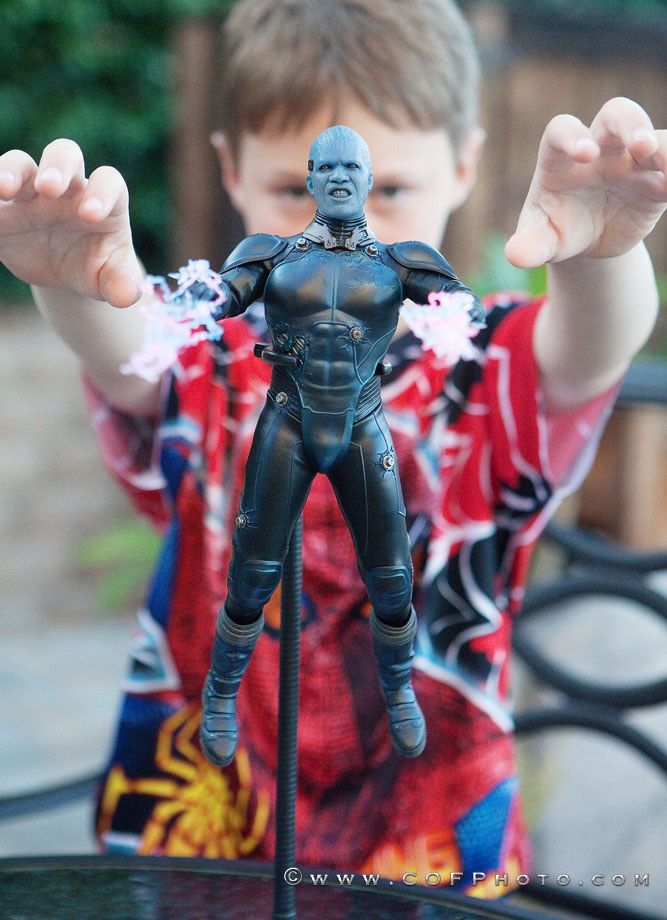 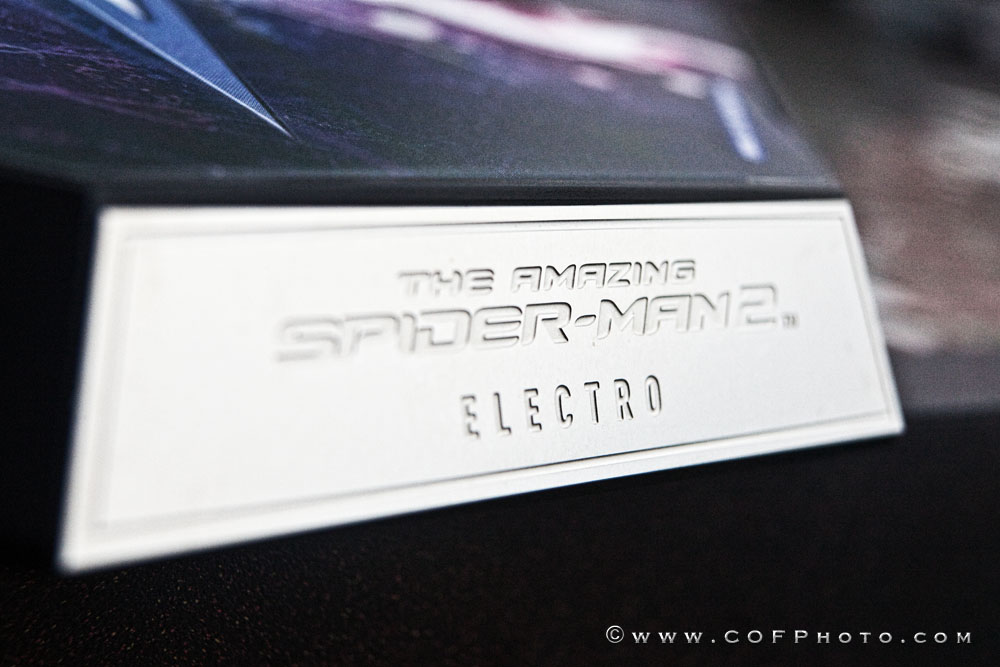 All in all Electro is a must-have, and with the exact future of Spidey up in the air right now in the movies, we really have no idea when we’ll have more Spider-Man villain figures coming our way from Hot Toys. Here’s hoping we get many more that are just as cool in the future! 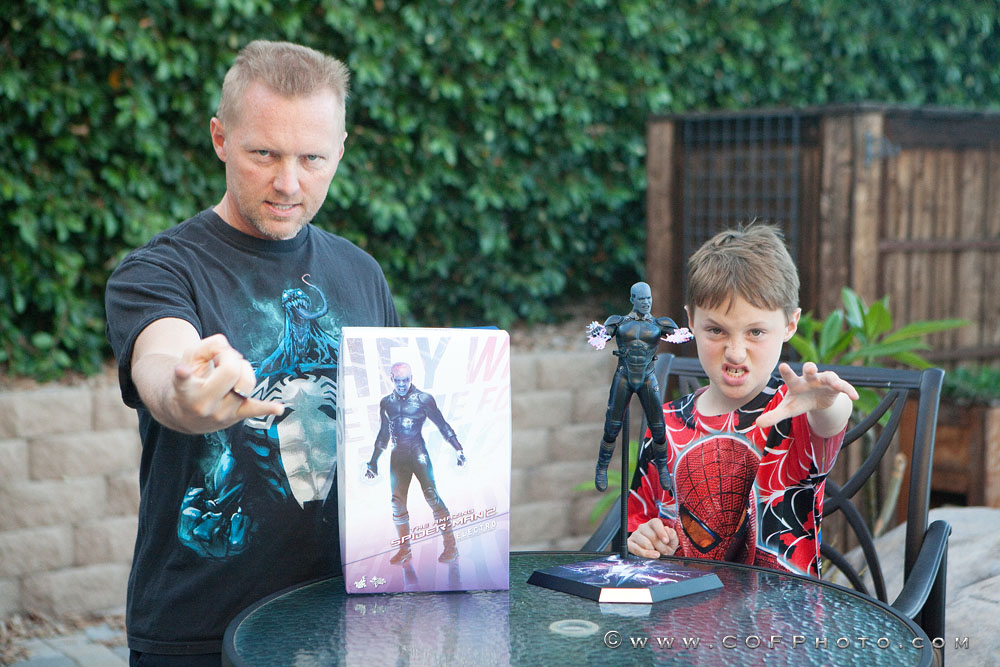 That's no moon ...Or is it? Star Wars trivia time!