The best holiday gifts are the ones that keep on giving. There’s a whole ‘lotta happiness during the unboxing, and then hours of playtime after. You know what we’re talking about, of course. Toys!

Now, did you think those kinds of presents were limited to kids? Think again! Hot Toys combines nostalgia, childhood, and high-end collectibles with their selection of Star Wars™ figures. So below, we’ve put together a specially curated list of Star Wars action figures guaranteed to help your gift recipients get the most out of their holiday — and the rest of their New Year. You can easily win the holiday gift exchange with this present. The Boba Fett™ (Deluxe Version) Sixth Scale Figure Set features two versions of this fearsome character. Yep, two whole collectibles in one box. Based on Boba Fett’s appearance in The Mandalorian™ season 2, these action figures will allow your honored gift recipient to display the soon-to-be Mos Espa Daimyo™ in all his glory. “It’s ironic. Clones wanted names instead of numbers, yet now people are signing up to be given numbers.”

This one is for the person who spent all their playtime imagining action figure battle scenarios. You know, the one locked in their room for hours on end making blaster noises with their mouth? Yeah, for that young-at-heart collector, you need the Echo™ Sixth Scale Figure. Now they can have their own Clone Force 99™ for display alongside their classic clone trooper™ figures. “You are a Mandalorian! Your ancestors rode the great Mythosaur. Surely you can ride this young foal.”

Like with Boba Fett above, we can write this with certainty: Figure sets enhance that sense of childlike wonder. We want our collectibles to be able to interact and be posed as if they’ve been taken straight from the screen. Help the biggest Star Wars fans in your life achieve this with the Mandalorian™ & Blurrg™ Sixth Scale Figure Set. With this set, collectors can recreate fun moments and memories from The Mandalorian season 1 — a perfect way to pass the time before the next season! “Hello, what have we here?”

Lando Calrissian™ is undoubtedly one of the most charming Star Wars characters of all time. Somehow, Hot Toys has managed to capture all that charisma in the Lando Calrissian Sixth Scale Figure. Additionally, this Lando action figure comes with a Cloud City™ backdrop. Plus, he has specially designed retro-style packaging! Your friend or family member will have a blast setting him up on the shelf or entertainment stand in all his vintage beauty. 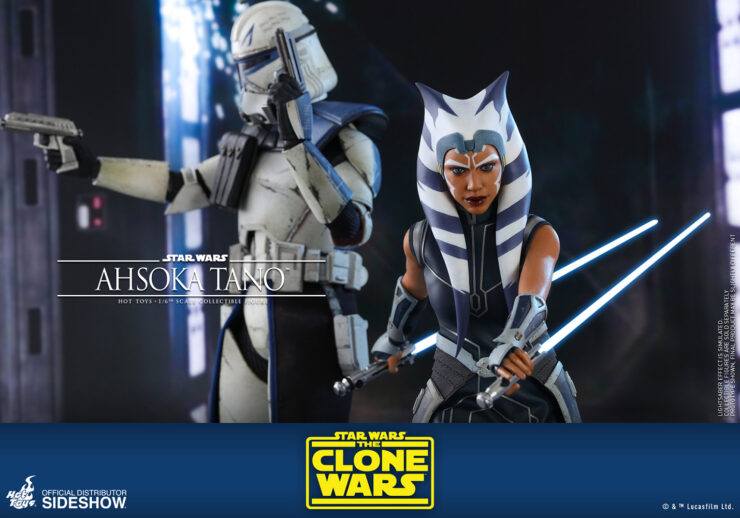 “You’ll find I have many qualities for you to dislike.”

Do you have a snippy sibling or hot-headed bestie? Do they love strong female characters and Star Wars? Well, have we got just the thing to gift this year. The Ahsoka Tano™ Sixth Scale Figure is based on her appearance in The Clone Wars™ season 7, in which she had the most incredible action scenes and awesome character interactions. This is a must-have for anyone hoping to capture the intensity of this final clone versus Jedi™ confrontation.

Will you gift any of these Star Wars collectibles this 2022 holiday season? Share your best present picks at side.show/geekgroup, and don’t forget to Let Your Geek Sideshow!