In Star Wars™: The Clone Wars, we finally get to meet the five Hutt families that make up the Hutt Grand Council on the planet of Nal Hutta. Until this point, most fans were solely familiar with the infamous gangster Jabba the Hutt.

But who are the members of the council, and what roles does each family have in Hutt society? And most importantly, what makes Jabba stand out from the rest? Let’s find out.

Arok is an interesting Hutt, for his loyalties spread further than most other Hutts. One of his distant relatives convinced the other heads of the Hutt clans to entrust Arok with control of one of the most powerful and ruthless Hutt crime families. He had a tattoo of the Besadii Kajidic (a Hutt clan) on his left arm, signifying how extremely important his loyalties were to him.

Arok had orange eyes, and his skin was blue and yellow.  He also enjoyed watching Twi’lek dancers and had a smoking habit, as all Hutt leaders seemed to have their own vices.

Gorga is Jabba the Hutt‘s nephew, and intended to grow the criminal empire even larger than Jabba ever did. Like many Hutt crime families, no crime was too sinister to commit if there was money to be earned. Money was the most important and final goal in all ways. And so, dealing in slave trades, evading Jedi, and turning profits, Gorga grew their criminal empire far beyond the scope of Jabba the Hutt!

Gorga had turquoise eyes, and his skin was green and tan. He was a part of the Desilijic Kajidic (a Hutt clan), which was one of the most powerful Hutt clans of all.

Oruba was an elder Hutt who advocated for more traditional decisions on the Hutt Grand Council. Like many crimelords, Oruba had a short-fuse and a massive appetite for food and greed. Of all the members of the Hutt family, however, Oruba had a much more unique ending to his story — Oruba was killed by Savage Opress.

Gorga had blue eyes. He was born with a unique genetic difference that left his skin completely without pigment. Accordingly, he was one of the few Hutts to accessorize and wear clothes.

Marlo was caught up in the same struggles as Oruba. Marlo had to deal with Savage Opress, but narrowly avoided the same fate as his kin. However, the Dathomirians had just as important of a role in his demise. When the Hutt Grand Council gained control of the Dathomirian Witch, Talzin, each member got to use her as a slave. Unfortunately for Marlo, by then she had had enough. She killed Marlo and escaped.

Gorga had violet eyes, and his skin was tan and brown with a pattern that gave him the look of having a mustache. His appearance was designed to look like Marlon Brando’s portrayal of Don Vito Corleone in The Godfather (and his name is even derived from this association). 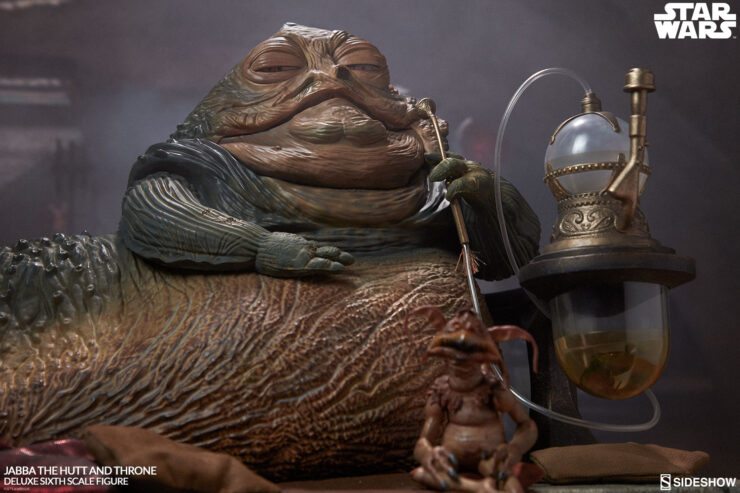 Perhaps the most famous of the Hutt clans is the Jabba Clan. Jabba the Hutt is the head of the clan and was featured heavily in original Star Wars trilogy. Jabba was one of the most feared crime lords throughout the galaxy, and he certainly had sway in the Hutt Grand Council. He often spent time with his pet Kowakian monkey-lizard Salacious B. Crumb, and greatly enjoyed keeping slaves like the imprisoned Leia Organa. Leia would eventually escape and strangle her captor to death.

Jabba had orange eyes, and his skin was green and tan just like his nephew Gorga. He was a part of the Desilijic Kajidic Hutt clan before his demise.

Other than Jabba the Hutt, who is your favorite Hutt in the Star Wars universe? Let us know in the comments, and don’t forget to Let Your Geek Sideshow!

Cyberpunk 2077 POLL: How Many Hours Have You Played So Far?