Is it getting hot in here, or is it just Ghost Rider?  Things heated up this week as we debuted some awesome news for fans of the fiery antihero with a penchant for penance!

Felipe Smith, the creator of Robbie Reyes Ghost Rider, and Gabriel Luna, the actor who portrays Reyes on Marvel’s Agents of SHIELD, recently dropped by Sideshow HQ and checked out some sixth scale spirits of vengeance firsthand.

In this awesome video interview from Sideshow Live, the duo talked shop on Ghost Rider as a character, their Marvel memories, and seeing the Robbie Reyes and Johnny Blaze Ghost Rider Sixth Scale figures in person.  Check it out!


The Ghost Rider Sixth Scale Figure also recently rolled through our photography department for a gallery update.  Consumed by hellfire and the Spirit of Vengeance, Johnny Blaze possesses supernatural powers of strength and endurance.

As a fearsome fiery skeleton, the Ghost Rider travels by way of his malevolent motorcycle to inflict torment on those in need of reckoning.  Check out this production gallery sneak peek, and look out for the full photo update soon! 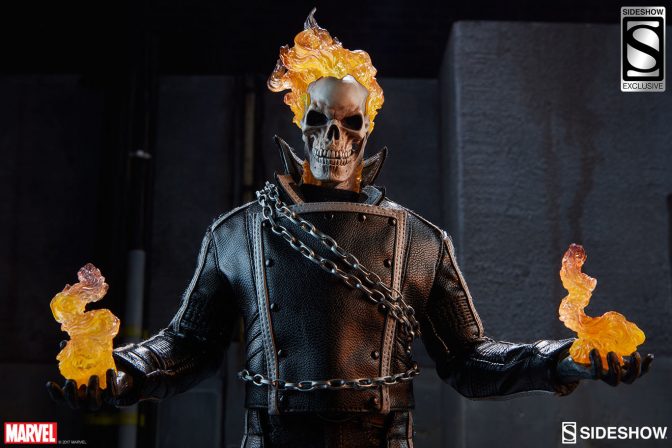 We also unboxed one of these bad boys on Sideshow Live this week, and now you can enter to win that very same figure!  Check the contest form below.

That’s a hell of a lot of hellfire!  Be sure to Let Your Geek Sideshow and share your favorite Ghost Rider news with us in the comments.

From the Depths of Fathom- Who is Aspen Matthews?