Diana Prince is from Themyscira, a paradise island and the home of the Amazons, a race of women-only warriors. There, they live a peaceful life away from the foolish ways of Man. They are shrouded by a magical veil that hides their beautiful island from any radars, sensors, and even ships sailing past. It is only once you break through the veil that you’ll see how incredible Themyscira truly is.

The Queen of the Amazon’s name is Hippolyta. Within the island’s Greek temples, Wonder Woman was sculpted from clay. Hippolyta, her mother, then breathed life into Diana and her twin. They were powerful, and blessed by the Greek gods with powers unique to them.

But did Hippolyta sculpt that clay alone? Does Wonder Woman have a father? Let’s wrap a lasso around the many truths of this unique DC Comics mystery. 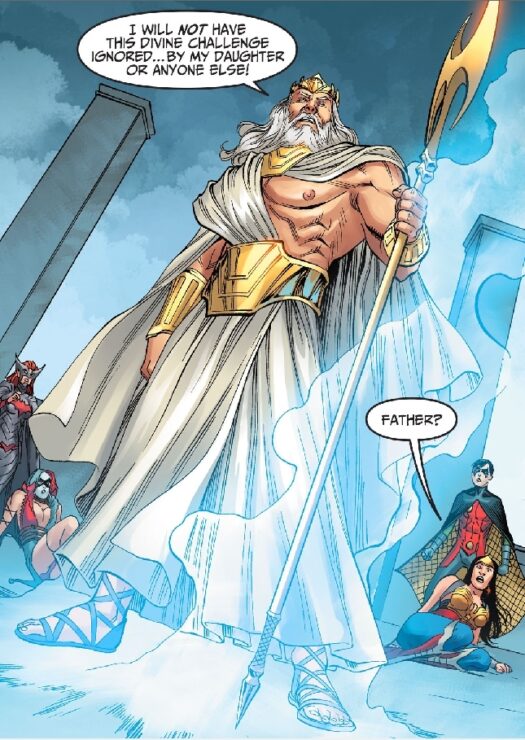 In the current DC comics, and even in the Wonder Woman films, it seems that Diana Prince was not sculpted from clay. In fact, this origin could be yet another of Zeus’ many Olympic-sized deceptions. In Greek mythology, Zeus, the king of the gods, is relentlessly unfaithful to his wife Hera. It seems that pattern continued when he met Hippolyta. However, while Zeus is a cruel and powerful god, Hera is a jealous one. If she discovered that Wonder Woman was actually Zeus’ daughter, there’s no telling how the Queen of Olympus would respond.

And so Hippolyta and Zeus came up with a grand lie to cover their affair: Wonder Woman was purely sculpted from clay. If Diana believed it to be true, it would protect her from Hera. But this lie would not last forever. When Wonder Woman wields her Lasso of Truth, forged from the girdle of Aphrodite and empowered by the fires of Hestia, it’s impossible for lies to remain hidden. Wonder Woman always finds her truth.

With that in mind, it goes without saying that Diana eventually found her father. It explains why she was so different compared to the other Themiscyrans, and it explains why she had so many powers. Even still, while some of her powers came from her divine lineage, most of them were blessings directly from the Greek gods themselves. She was entrusted with their powers to do good. So while Zeus might be Diana Prince’s father, it was actually a group of Olympians who believed in her and made her Wonder Woman. 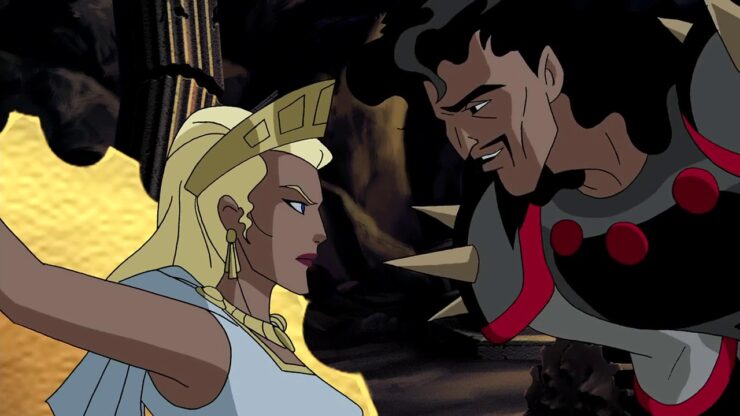 In the Justice League animated series, we got to see Wonder Woman and Hawkgirl battle their way through the depths of Hell. It seems that the Lord of the Underworld, Hades, needed help. Faustus, a powerful mage, had used his abilities to take control of the Underworld. He was even powerful enough to trap Hades. With his spells, and a massive suit of armor, Faustus was free to study any of the texts in Hades’ infinite library.

Luckily, with Hawkgirl’s magic-nullifying mace, and Wonder Woman’s undying bravery and resilience, they were able to defeat the sinister magic user. Hades was thrilled to claim the Underworld as his own once again, but he said very little in the way of thanks. Instead, he offered Wonder Woman a window into her past. He suggested that he might know who her father really was.

Hades insisted that Wonder Woman had been lied to. While she was made from clay, he said, she was not made only by her mother, Queen Hippolyta. Hades told her that he was once in love with the Queen, and that they sculpted Diana together. She was just as much his creation as Hippolyta’s.

Diana didn’t care. She simply stated, “I know who raised me.”

Like most comic book characters, especially characters with 80-year histories, there are many different origin stories for Wonder Woman. Her very first origin story insists that she was sculpted from clay and only her mother gave life to the clay. She was created by the magic of Themyscira — certainly rooted in the power of the Greek gods, but not from the Greek gods.

There are multiple reasons not to believe certain Greek gods’ claims of paternity when it comes to Wonder Woman. Zeus is notoriously unfaithful, but he is also a notorious liar. Hades is quite literally the Lord of Hell, and most of the other Olympians completely distrust him. These two are always seeking to gain new worshippers and followers. If Wonder Woman, the most powerful woman on Earth, worships them, then they would be thriving.

Perhaps they recognize that Wonder Woman is more powerful than them. If she’s able to defeat the God of War, Ares, in multiple battles throughout the ages, surely she could defeat the others. Perhaps they need her to believe that she is weaker than them. They need her to believe that they are related by blood. That way, she won’t go after them when their arrogance leads to yet another mistake.

And so, there could be just as much truth to her fatherless clay origins as the rest of these stories.

What do you think? Does Wonder Woman have a father? Or is it the arrogance of the Greek gods only hoping to take part in a mythology that extends beyond themselves? Let us know in the comments, and don’t forget to Let Your Geek Sideshow!