Dragons may be the biggest stars among the monsters of Dungeons & Dragons — they’re mentioned right there in the title! But D&D lore is loaded with hundreds of fantastic, non-draconic monsters.

Here are 10 examples of the variety of creatures you might encounter in a D&D game, ranked in order of challenge rating (i.e. how difficult they are to fight) from lowest to highest.

At first glance, a flumph does not seem like much of a threat. With only seven hit points and a challenge rating below zero, this wee, flying creature can be incapacitated if it lands on its back.

However, it has telepathic powers, tentacles which can deliver acid damage, and its most potent weapon: a powerful stench spray that poisons anyone who is coated by the spray as well as anyone standing within five feet. 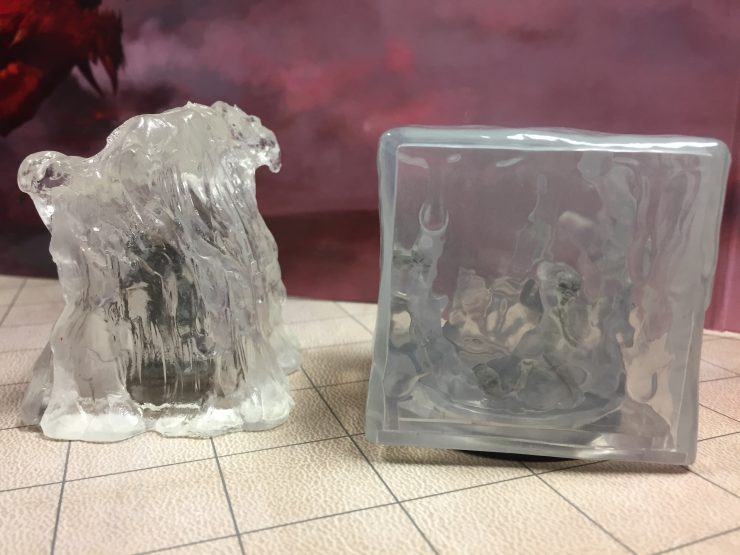 D&D includes many different creature types, including the ooze, and the gelatinous cube probably is the best known example. The large cube moves slowly and is transparent, so it can hide in plain sight, surprising unfortunate adventurers.

It can engulf other creatures and objects, causing acid damage and gradually absorbing them. 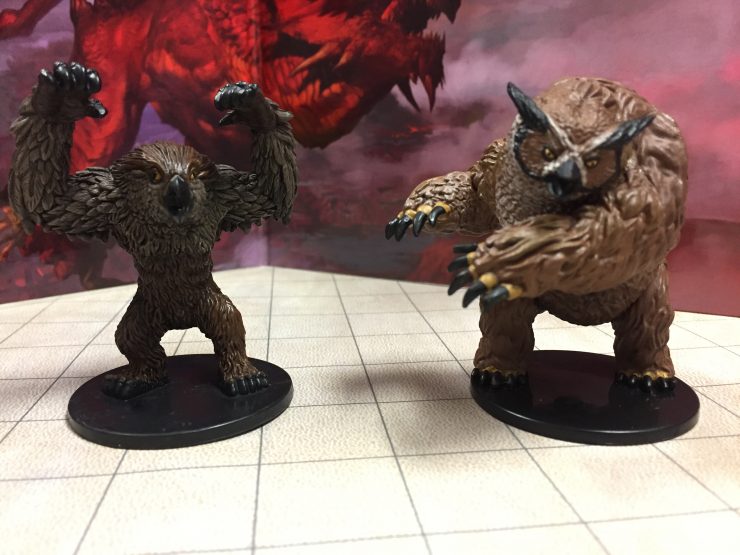 Legend has it that D&D creator Gary Gygax once bought a package of cheap plastic toy animals labeled “dinosaurs,” which looked nothing at all like dinosaurs. The strange, mutant creatures inside inspired a number of classic D&D monsters, including the owlbear.

The owlbear has a bear’s body and claws, but features feathers along with fur, and has an owl-like head with a sharp beak. It’s adorable if it’s not attacking your party.

Even plants can be monsters in D&D. The shambling mound is a large creature that can walk and swim at the same rate of speed, strikes foes with club-like branches, and can engulf and smother a creature much like a gelatinous cube.

This extra-hardy plant creature is resistant to both cold and fire damage, and when it is dealt lightning damage, it heals instead of losing hit points. 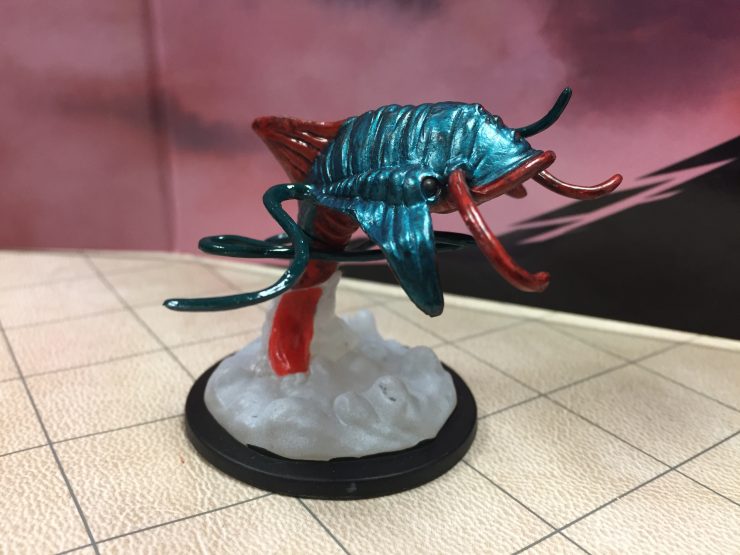 An aboleth is a large, amphibious aberration with some nasty features. Its telepathic abilities allow it to read minds, cast potent charm effects on other creatures, and even drain health psychically from a creature it has charmed. It also can cause physical changes. Coming in contact with its mucous cloud can alter a creature so it only can breathe underwater for a few hours.

Worse yet, a strike from an aboleth’s tentacles may transform the victim into an aquatic creature with slimy, translucent skin which cannot leave the water without taking acid damage from the air, cannot regain hit points when out of the water, and requires a powerful healing spell to cure the condition. 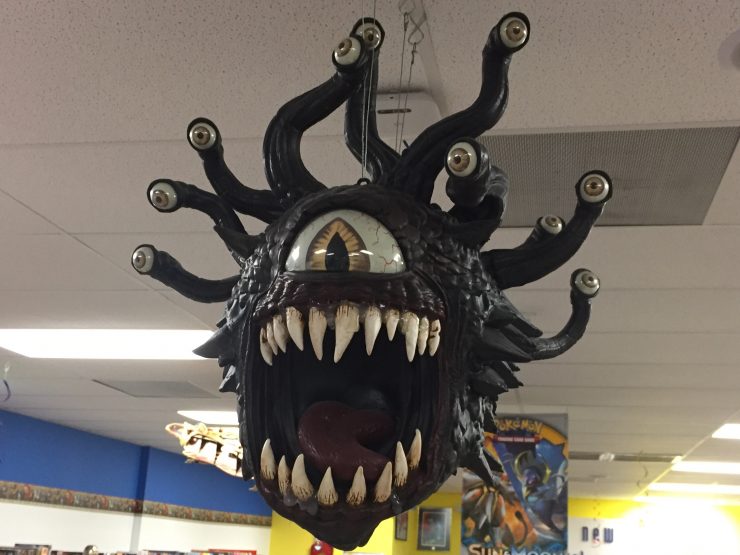 The beholder is a terrifying aberration, a classic monster that a dungeon master can use to get a party’s attention in a hurry. This flying monster has one large, central eye which projects a large anti-magic cone, which makes it much more difficult for spellcasting opponents to fight it. Ten more eye stalks protrude from the beholder, each of which can shoot a different type of destructive ray: charm, paralysis, fear, slowing, enervation (necrotic damage), telekinesis, sleep, petrification, disintegration, and death.

The disintegration ray is perhaps the most dangerous. The death ray can kill a creature if it reduces its hit points to zero, but a Revivify or Raise Dead spell still can restore that individual’s life after the fact. However, those spells require a body to work. If the disintegration ray brings the target’s hit points to zero, it reduces the target to a fine ash, which cannot be revived.

One of the most infamous Beholders in the realms is the Xanathar, also called The Eye, who was a criminal lord of a Thieve’s Guild in Skullport.  His most prized possession is his pet goldfish, Sylgar.

As you may have heard from outraged, under-informed individuals from the 1980s, D&D lore features its share of devils and demons. The balor is a demon, and you are in for a tough fight if your party encounters one. It can teleport at will, causes fire damage to any creature within five feet of it, and deals triple damage on a critical hit with its longsword.

If you manage to kill it, look out — it explodes in a devastating fireball when it dies. Adding insult to injury, all its weapons are destroyed when it explodes, so looting the body is impossible. 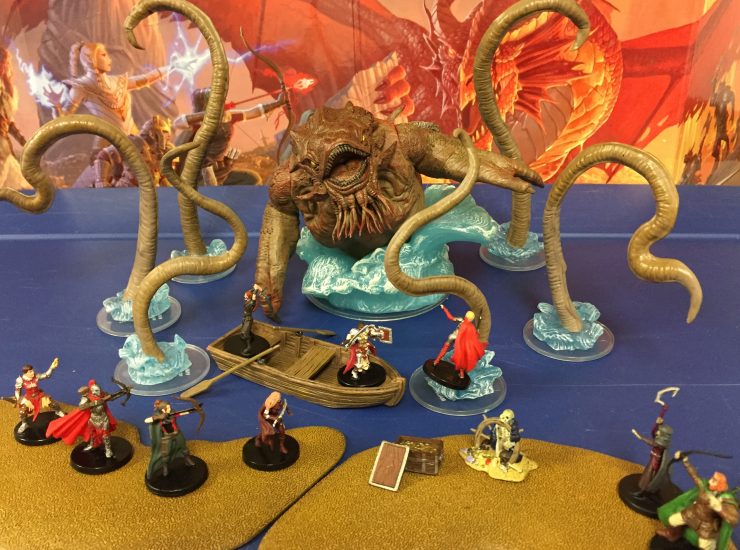 Fighting a kraken is a prime opportunity to get your entire party killed. The gargantuan titan is immune to damage from lightning, as well as bludgeoning, piercing, or slashing damage from non-magical attacks. It has 472 hit points, breathes both air and water, and cannot become frightened or paralyzed. Its tentacles have a reach of 30 feet. If it grapples a creature, it can choose to hold it, fling it up to 60 feet away, or swallow it whole.

It also can use lightning attacks on opponents up to 120 feet away, and can poison its attackers with a gigantic ink cloud. The kraken’s lair has its own dangers for intruders, and the whole region in a six-mile radius around it can be affected. Long story short: think twice before you try to fight it with your +1 longsword. 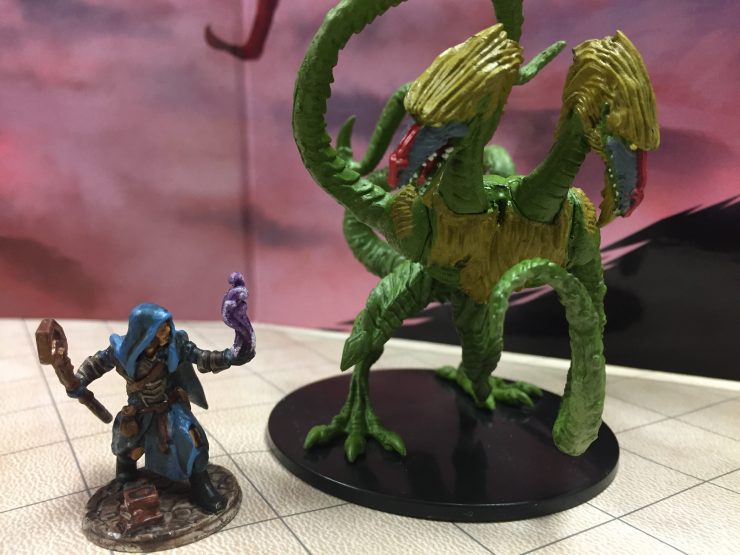 Fans of Stranger Things will remember the demogorgon, a huge fiend with powerful abilities that can mess with your mind. It casts spells, has dangerous gazes which can hypnotize, beguile, or induce insanity. It also can knock a target around with its tentacles or tail, reducing the target’s maximum hit points with its deadly strikes.

It is resistant or immune to many types of damage, including non-magical attacks, so going head-to-head with the demogorgon is not for the faint of heart or low of level.

The tarrasque is notorious as the creature with the most hit points of all those featured in the Monster Manual (676 HP). The only other official monster with a challenge rating of 30 is Tiamat, the evil dragon goddess. The tarrasque is immune to fire, poison, and non-magical bludgeoning, piercing, or slashing damage. It cannot be charmed, frightened, or paralyzed. It can deflect the Magic Missile spell, bouncing the damage back against the caster.

The tarrasque can induce fear in its opponents, forcing them to turn and run, but that probably is their safest option since it also makes five attacks per turn using its bite, claws, horns, and tail. Like the kraken, it can grapple and swallow targets. If your party makes it to Level 20, maybe you can celebrate by hunting the mighty tarrasque. Everyone else should run away.

Do you have a favored enemy to fight when playing Dungeons & Dragons?  Let Your Geek Sideshow and tell us in the comments below!

Avengers 4 Trailer Coming "By the End of This Year", Madame Xanadu Cast for DC's Swamp Thing, and More!