With all of the talk about Wonder Woman these days, it’s easy to overlook the fact that there are other iconic, female characters who have an established presence in film and television. One of the most visible and long-lived characters to make the leap from comic books to major features is Gotham City’s favorite burglar, Catwoman.

Since 1966, Catwoman has been a permanent media fixture and a constant source of bad luck for the do-gooders of Gotham. Unlike many other female characters, Catwoman’s femininity is portrayed as an asset rather than an attribute that is best left ignored. She’s powerful, mysterious, and nimble enough to permanently keep anyone whose path she crosses on their toes. With her sharp claws, lethal whip, and quick wits, Catwoman is one of the most formidable villains in Gotham.

Keep reading to discover the many ways in which Catwoman has been shown in the DC Universe cat-alogue. (Sorry, but it had to be done.) 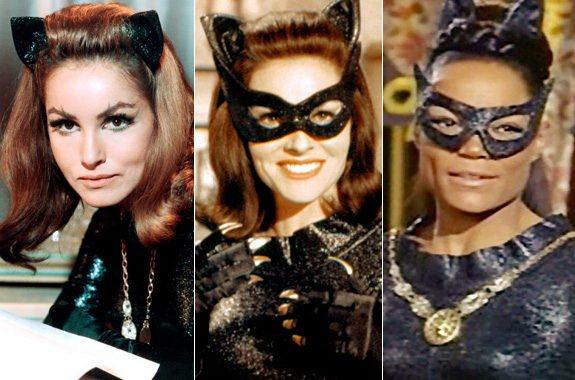 Catwoman’s first live-action appearance was on the Batman TV series. Over the course of 120 episodes and a feature film, three different actresses donned the Catwoman suit. Julie Newmar portrayed the character for the first two seasons of the show, and Eartha Kitt starred as the frisky, feline foe in the third and final season. Meanwhile, Lee Meriwether wore the cat suit in the feature film.

Throughout all of the episodes, the changes in Catwoman’s appearance were never addressed by the characters. With her unique voice and physicality, however, Eartha Kitt’s portrayal of Catwoman on the original Batman TV series was possibly the most purr-suasive. (Yes, this entire article contains cat puns. You’ve been warned.)

Following the success of Tim Burton’s Batman movie, Catwoman was introduced in the sequel: Batman Returns. Burton’s version of Catwoman had a tragic origin story.

After a confrontation with her boss, Maximillian Shreck, Selina Kyle was pushed from a building and left near death. As a result of an unexplained supernatural intervention involving a multitude of cats that mysteriously revived her, Selina Kyle was reborn as Catwoman, a woman with a new attitude and unbridled spirit. No longer a mousey (ugh!) office clerk, Catwoman used guile and aggression to whip the heroes and the villains of Gotham into shape.

Portrayed by Michelle Pfeiffer this time around, this interpretation of the character would reset the Catwoman template for years to come. Batman Returns marked a pivotal reinvention of the character, one that is still popular with fans today. Unlike the previous versions of Catwoman that were noticeably more housebroken, Pfeiffer’s Catwoman was full of hiss and vinegar. (We warned you about the puns!) 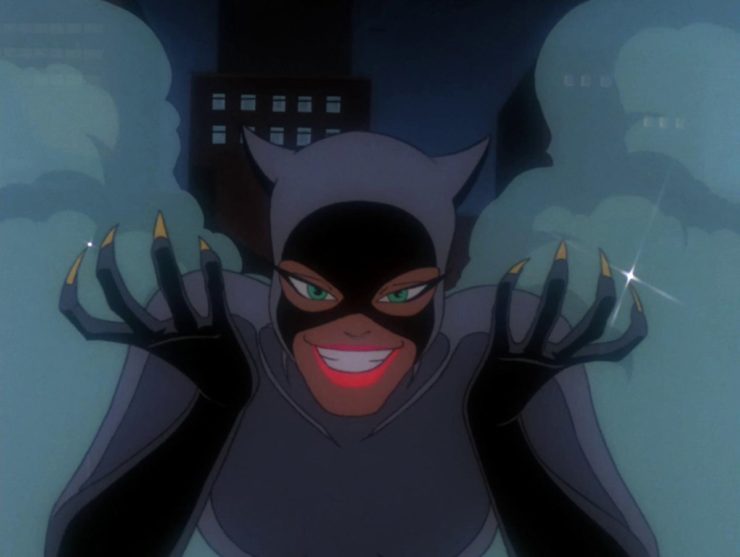 As popular as the real-life versions of Catwoman have been, the character has also added an extra element of intrigue and adventure to Batman’s animated adventures. Much like the Tim Burton version of Catwoman, the animated version was deadly, acrobatic, and more than a match for the caped crusader.

Her allegiances were never predictable, however, and she often found herself sitting on the fence between the heroes of Gotham and the criminal underworld. While Catwoman wasn’t a permanent fixture on the series, she did pop up to trouble the caped crusader every meow and then. (Can’t stop, won’t stop!)

The Catwoman movie proved that, though she may have nine lives, not even a character as well defined as Catwoman always lands squarely on her feet. This on-screen version of Catwoman was far-removed from the traditional comic book movie fare that many fans were expecting. Eliminating almost all of the comic book tie-ins, including Batman, and cranking up the sex appeal to bazillion, this version of Catwoman caused quite a stir.

Though the movie was a box office flop when it premiered in 2004, Halle Berry’s version of Catwoman proved to be an unexpected fan favorite when she bested all of the other cinematic versions of Catwoman in a recent poll. Even in box office defeat, Catwoman is still the pick of the litter. (That one’s a double entendre…or should we say: double en-PAW-ndre?)

Perhaps the most practical and subdued version of Catwoman to claw her way onto the screen, director Christopher Nolan took very few chances in pushing the character’s boundaries. With a streamlined outfit that harkened back to the days of the Batman TV series, Anne Hathaway’s version of Catwoman was more in line with the contemporary comic book interpretation of the character.

With so much going on in The Dark Knight Rises, however, Catwoman had less of a pronounced position in the movie. Her presence was often overshadowed by Talia al Ghul and Batman’s back-breaking conflict with Bane. The scenes that featured Catwoman were exciting and memorable, however. So, even with Catwoman’s limited screen time, it wasn’t a complete cat-astrophe. (Hang in there! The puns get better.)

Providing a modern spin on the character, Gotham has introduced Catwoman to a whole new generation of Bat-fans. With an added dose of realism, Gotham gives Selina Kyle a more grounded and nuanced background. This time around, Catwoman is an orphaned street thief who witnesses the murder of Bruce Wayne’s parents.

Through her ongoing encounters with Bruce Wayne, Selina plays a pivotal role in the burgeoning hero’s development, from teaching him how to fight to giving him his first kiss. Due to Gotham’s format, the show has time to delve into Selina’s character and explore her alter ego in greater depth. Portrayed by Camren Bicondova and later by Lili Simmons, Gotham’s version of Catwoman is not someone to be kitten around with. (Okay, maybe the puns don’t get any better.)

News is slowly trickling in about the latest Batman movie, but it will still be a while before we see the finished product. While we don’t know exactly what’s in store for the Dark Knight this time around, we do know that the Zoe Kravitz will be the newest face of Catwoman. And, honestly, who can blame her for pouncing on the opportunity?

Having starred in X-Men: First Class, Kravitz is no stranger to acting in superhero films and will be well prepared for the role. Will her character attempt to thwart Batman, work alongside him as his possible love interest, or both? One can never be sure with such an elusive figure. We’re likely to see more from this production in upcoming days and weeks—now that the cat is out of the bag. (Congratulations! You made it to the end!)

No matter who puts on the suit, Catwoman is one of film and TV’s most celebrated superhero characters. Which version of Catwoman is your favorite? Let us know in the comments below, and don’t forget to Let Your Geek Sideshow!