MCU stans are living their best lives. Only two weeks after the WandaVision series finale, the latest Disney+ show has premiered- Marvel’s The Falcon and The Winter Soldier.

The series premiere, called “New World Order,” aired last Friday and delivered in a way that is strangely similar to way to its predecessor: it gave fans and its actors more to ruminate over when focused on their favorite characters. While there were epic action shots and cool gadgets, we got to spend more time exploring the minds and civilian lives of Sam Wilson and “Bucky” Barnes.

This premiere gave us time to explore the world around these two characters, so let’s talk about it. Here are the biggest takeaways from episode one of The Falcon and The Winter Soldier.

It’s a Post-Blip World (for Better or Worse)

Avengers: Endgame showed people returning after being dusted by the great titan Thanos. It was a climactic moment that focused on the greatest superheroes returning for the fight, but it didn’t show what happened immediately after. The “hurrah” moment didn’t reveal what everyone snapped felt like returning.

WandaVision, too, broached the Blip subject (the official name for the reverse-Snap). It briefly showed the emotional aftermath of those who were gone those five years. We saw Monica Rambeau deal with finding out her mother had died three years before her reappearance. Now, Falcon and Winter Soldier is tackling the subject again. This time with even more nuance and time to consider what a post-Blip world is like.

For Sam (Anthony Mackie), who was blipped away, it means he must make amends. While he was gone, his sister Sarah (Adepero Oduye) struggled to keep the family business afloat. Now she wants to move on from it but Sam can’t let it go. This world is still fresh to him. He didn’t see what Sarah went through all those years without him. He doesn’t understand how half of the population struggled after the Snap. Instead, he still sees the world through the rose-colored lenses of an Avenger and it’s not until he and his sister get rejected for a loan to keep the business afloat that he can finally understand how difficult this new world is.

Bucky (Sebastian Stan) isn’t having an easy time either. He was also snapped away, and his best friend Steve grew old and stepped away from the fight following their hard-won victory. You’d think he’d be in a better place after seeking therapy as a part of a pardon, but opening up about his feelings is proving difficult (especially as an ex-brainwashed assassin). Now, like Falcon, the super-soldier is figuring how to cope—and make amends for his killer past—in a post-Endgame world.

“New World Order” opens with Falcon assisting the U.S. Airforce to take down LAF, a criminal organization led by Georges Batroc (aka Batroc the Leaper). You may have remembered the mercenary from Captain America: The Winter Soldier.

The opening scene had big, blockbuster action scenes with Falcon stopping the mission (but not stopping Batroc from escaping) with great skill and tact, but what left the largest impression on most viewers was the new character working with Sam. The new character is Torres (Danny Ramirez), a young, zealous soldier who’s gotten close to Sam. Anyone who follows the comics knows the latest MCU addition is a big deal. In the comics, Joaquín Torres has everything it takes to be a hero: he has a heart of gold and preternatural abilities to fight crime after being the subject of human experimentation. Quickly enough, Torres becomes Sam’s sidekick and eventually becomes the second Falcon.

If The Falcon and the Winter Soldier is anything like WandaVision, which did reveal Monica Rambeau’s origin story, Torres’ superhero start could be a main component of the next Disney+ series.

But a good superhero story is only as good as the antagonists pitted against our beloved supermen. Well, Torres is not the only new addition to the MCU.

“New World Order” shows a facedown with the young soldier and a masked, super-strong foe, most likely a Flag-Smasher. The latter is a terrorist organization that believes the world was better off when half of the population was snapped away. Torres isn’t a match for the juiced-up masked villain and he is quickly taken down.

It seems that taking down this organization will have to be a team-up effort between Falcon, the Winter Soldier, and Torres. It’s one we’re already excited to see, especially if it includes a new Captain America and Falcon.

The State of the Country Isn’t Looking Too Good

As bad as the Flag-Smashers sound, the terrorist group is not the worst villain in the series—at least not to audience members. The award for most hated characters gets handed to the new Captain America, whoever that dude is. All we know is that the U.S. government totally and unjustifiably wronged Sam, who delivered Cap’s shield to be put on display in a museum in honor of Steve Rogers. 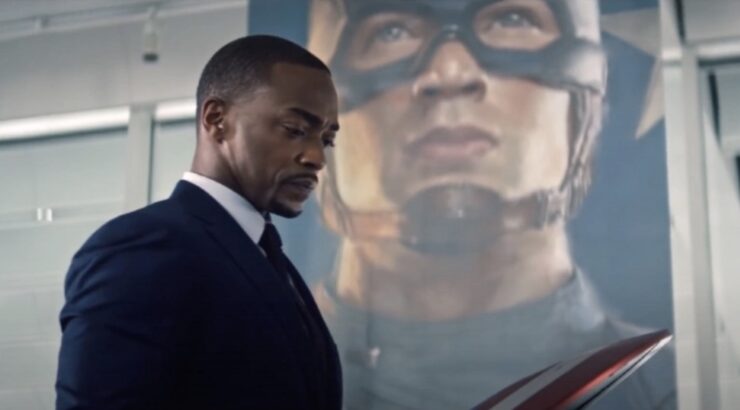 The Defense Department accepts the shield but quickly unveils their newly appointed Captain America. If anyone deserves that title, it’s Sam Wilson, not this Joe Schmoe guy. Sorry, John Walker. If you’ve read the comics you know it’s more than just his face in someone’s else suit that makes him unlikeable. The latest Captain America is no saint in the books. He’s written as the antithesis of Steve Rogers; he’s a puppet to Defense Department, for better or worse.

This brings us to our last takeaway: the state of the U.S.—heck, the world—doesn’t look so great. Thanos may have been defeated but Batroc is back, the Flag-Smashers want exactly what the Mad Titan wanted, and the U.S. government is up to some shady business. If ever the people needed a symbol of hope, it’s now.

We’ll just have to wait for more episodes and see how the series unfolds and where the shield lands for good.

Did you catch the series premiere of The Falcon and the Winter Soldier on Disney+? What did you think of the latest Marvel series to debut? Let Your Geek Sideshow and tell us in the comments!