The first few episodes of Star Wars: The Clone Wars Season 7 are now streaming on Disney+. These early episodes are actually new versions of some Season 7 prototypes that premiered back in 2015.

Though many already knew the stories, fans are incredibly excited for the official release, and the episodes have all been well-received by critics. The characterization of the clones has been particularly praised, as have the awesome animated visuals. And just like previous seasons, there are plenty of emotional moments.

Let’s catch up on what’s happened so far in The Clone Wars Season 7: Episodes 1-3.

To begin, the new season has followed a single arc, telling the story of four characters who are just a little bit different genetically. They are part of Clone Force 99, a group of defective clones. The unit was named after 99, another defective clone from Season 2 of the series, who was a decrepit clone with a heroic heart, despite his weak body.

However, the new clones introduced in Season 7 are actually a little bit better than regular clones. They each have their own quirks in ability that lead to quirks in character. This has given the squad a nickname among the other soldiers – the Bad Batch.

Hunter, the leader, is a fearless clone with enhanced senses. Wrecker is a beefcake – a gargantuan clone with huge muscles. Crosshair has above average eyesight, which makes him a fantastic sniper. And finally, Tech is a highly intelligent clone with a mastery over technology. The group has a confident, conquering attitude, and they show it off through some fancy red armor. 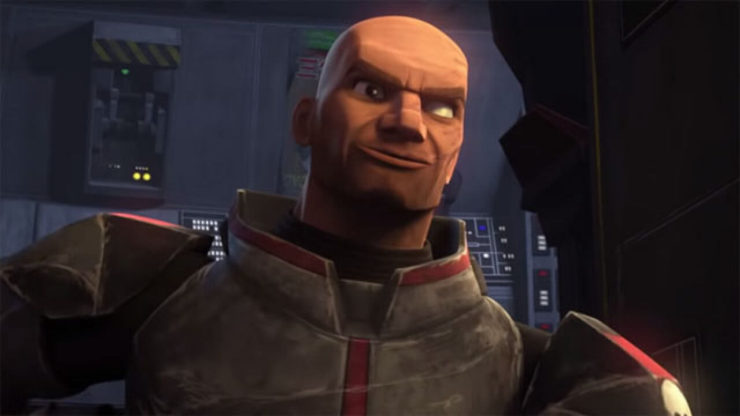 These clones are brought in to help Mace Windu, Anakin Skywalker, and the clone army regain control of Anaxes, one of the Republic’s largest shipyards. They need a small group to do something that the droids won’t expect. The Bad Batch is utilized to infiltrate the Separatists’ territory and steal intel from their Cyber Center.

Before the Bad Batch arrives, Rex tells Commander Cody something that he couldn’t bring himself to tell the Jedi Generals – the strategies used by the droids seem to be modeled after the tactics of Echo, a clone who was believed to have been killed during the Citadel mission on Lola Sayu (“Counterattack”, Season 3).

Rex, Cody, and a few other “Regs” (regular clones) join the Bad Batch in their quest to the droid headquarters. Their gunship is shot down, and we then see the Bad Batch in action on the ground. Their skills are ridiculous. First, Wrecker lifts the whole damn gunship off of an injured Commander Cody. Then the Batch takes out a full platoon of droids in one of the best fight sequences of the series.

There are a few more fights in the episode, including some arguments between Bad Batch and the Regs. The tension between them is high due to their differences in tactics, ability, and attitude. Still, they manage to work as a team against their real enemy – the battle droids.

The clones then fight their way through the Cyber Center. Tech searches through the computer system and discovers a signal coming from the planet Skako Minor, Headquarters of the “neutral” (but really Separatist) Techno Union. The signal contains the voice of CT-1409 – Echo. Rex seems to have been right all along. 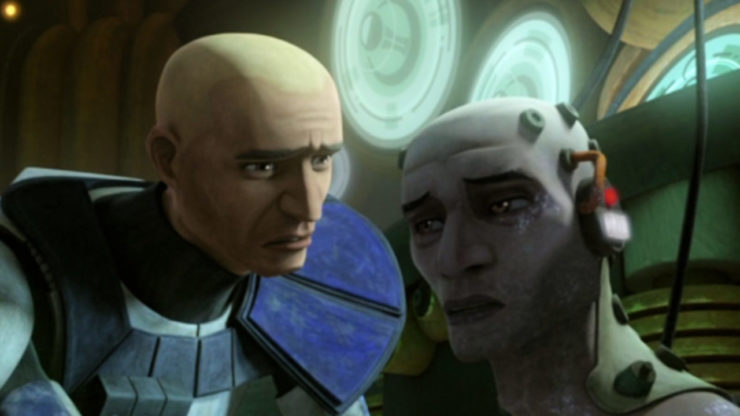 Rex discovers his long-lost friend Echo, a victim of the Techno Union.

In the second episode, “A Distant Echo,” the clones prepare to travel to Skako Minor to find Echo. Before they leave, we are treated to a nice scene in which Rex guards the door to the barracks so that Anakin can contact Padme Amidala through a holoprojector. The conversation with his wife is meant to be kept secret from Obi-Wan, but the always sly Kenobi catches on quick.

“I hope you at least told Padme I said hello!”

Afterwards, Anakin departs with the clones for Skako Minor. Once there, they are accosted by the planet’s natives, the Poletec, and their flying steeds, the Keeradaks. When Anakin is captured, the clones mount a rescue. Eventually, the heroes convince the Poletec that the Techno Union are the real enemy, and the natives then supply scouts to lead the soldiers to the Techno Union’s city, Purkoll.

After some intense battles, the clones discover that Echo is indeed alive. He had been hooked up to a machine that sifted through his mind and extracted his war strategies and the process had withered away his body. In fact, his body had already been severely damaged before being captured by the Separatists – he lost an arm, a leg, and part of his torso in the explosion on Lola Sayu. As a Techno Union experiment, his missing pieces had been replaced with cybernetic parts.

Echo falls into Rex’s arms, saying “You came back for me.” It’s a poignant moment, as we realize that Echo is unaware of how much time has passed since his capture.

Episode 3: On the Wings of Keeradaks

A close call on Skako Minor.

The third episode shows us that The Clone Wars is still epic as ever. It starts with the clones still fighting the droids as Rex and Tech try to fully disconnect Echo from the Techno Union’s computer system. They are successful, and they escape through an exhaust vent as the droids close in.

As they make their way through the tunnels, Echo reveals that through being hooked up to the computer, he learned all of the Techno Union’s plans and schematics. Using this information, the heroes find a long pipe bridging the gap between two buildings. They make the precarious journey across, but the droids catch up with them from both sides of the pipe. Using a recorded call, the clones attract the Keeradaks to their location. They jump on their backs and make their escape. Of course, the droids end up being able to fly themselves, and they pursue the heroes right away.

Fortunately, the good guys evade the droids and make it back to the Poletecs, who are angry that the war has been brought to their planet. However, when the natives see the tortures the Techno Union put Echo through, they decide to help Anakin and the clones in their fight. With combined strength, they successfully drive away a massive droid ambush.

As the clones and the Jedi leave the planet, grateful to have an ally in the Poletecs, Rex tells Echo, “It’ll be just like old times.”

What’s going to happen next? Are you excited to see the adventure continue? Let us know in the comments, and Let Your Geek Sideshow.

A Cat with More Than Nine Lives: The Many On-Screen Faces of Catwoman