When we consider movies, we most often think about the story they are telling, essentially the narrative or the screenplay. But that’s only part of cinematic language. There are the audio and visual elements, too: soundtrack, score, makeup, special and practical effects, and, most importantly for this article, costumes.

Costumes are a tool through which directors can share details about time period, setting, and characters’ personalities. Thus, within film, a character’s style directly and efficiently communicates to the audience who that person is. That’s where Sideshow’s new ongoing series, Suit Yourself, comes in.

Suit Yourself examines how style is a critical form of characterization. And as the most fashionable Disney villain, Cruella de Vil deserves her time in the spotlight all the way from her childhood to her appearance in the original 1961 animated 101 Dalmatians film. Let’s break down her fur-filled style evolution below. 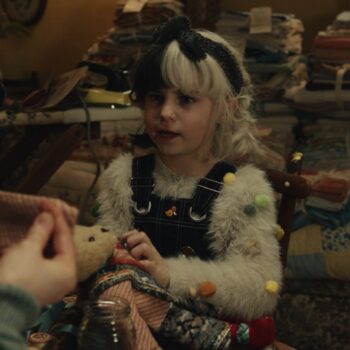 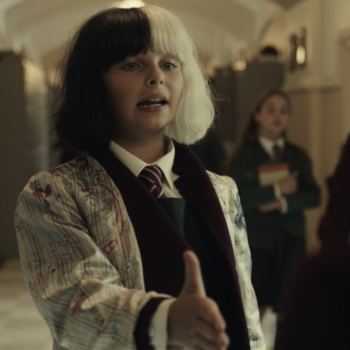 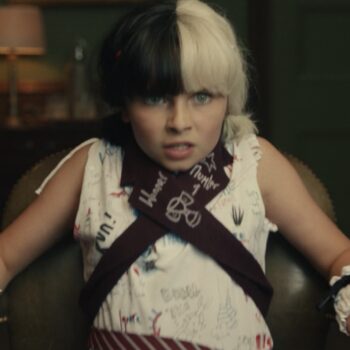 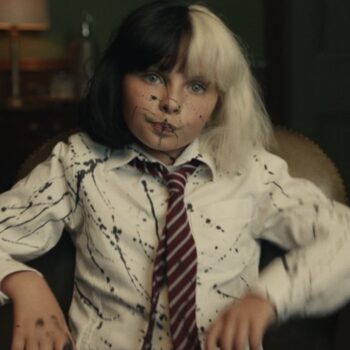 Estella Miller was a child with a penchant for troublemaking. Aggressive and unsympathetic, she solves her problems with violence — both physical and verbal. But she lashes out more ways than emotionally. Estella stands apart from the crowd with her outlandish fashion. Even from a young age, the girl experiments with styles, accessories, and atypical clothing combinations. At home, she actually wears a fuzzy white sweater reminiscent of her future fur attire.

And they are her clothes, marked by her rules and imagination. When she’s ordered to fit in, or change herself and her clothes, she stubbornly rebels even more from boring authority. And we can all admire the tenacity of a girl expressing her creativity and refusing to wear what she’s been told to wear.

Estella’s only constant is her hair: half black and half white, shoulder length. Her palette usually revolves around her preferred red, black, and white. Red is symbolic of war, danger, and power. Black means elegance and, at the same time, a character in touch with their shadowy side. White is the most interesting color to use for a villain because it denotes purity and goodness. Yet its positive connotation is twisted when we see how Cruella will achieve so much white in her wardrobe … by stealing it from dogs. 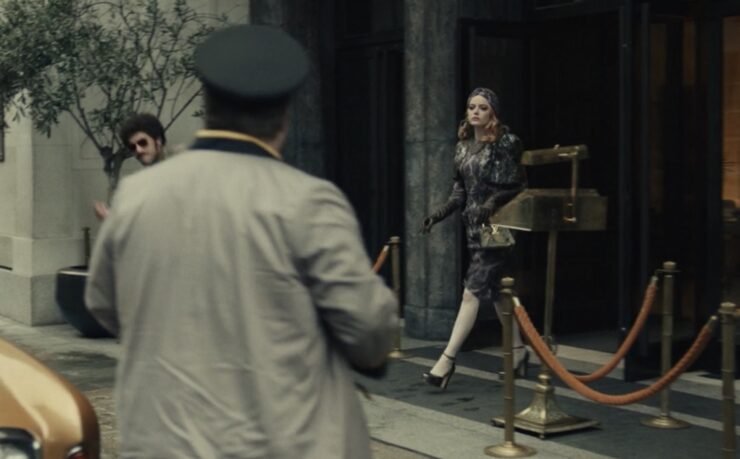 After she’s orphaned, Estella takes her fashion skills to the streets — literally. Utilizing her sewing skills, the grifter creates elaborate costumes in order to pull off schemes with her friends Jasper and Horace. She also changes her hair since she’s on the run, dying it different shades of red. The color is still within her preferred palette, but she is altering a core part of her identity by doing so. That and the various costumes have us questioning — who is the real Estella Miller? 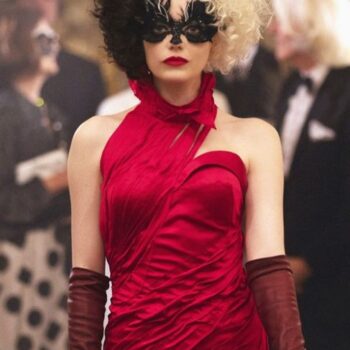 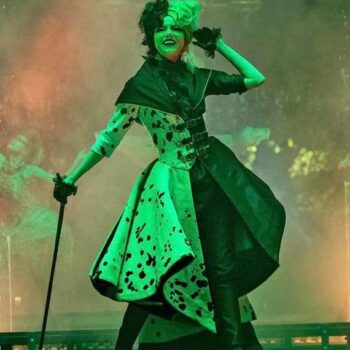 By the end of Disney’s Cruella, Estella Miller is gone. In her place is the violent and vindictive alter ego Cruella de Vil. She’s a fashion icon, both by her own internal recognition of her talent as well as the press’ fascination with her haute couture outfits. Her hair is back to its natural split color because she’s finally reconciled her true self, embracing the villain within. 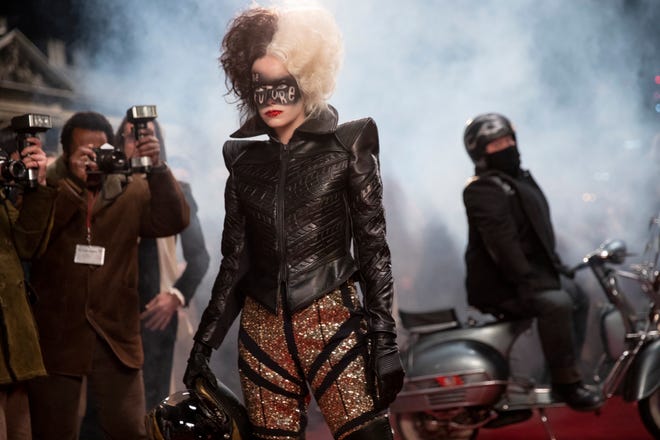 Cruella de Vil is Estella Miller’s future, undeniably. That’s all told in the costumes, which pay homage to the original 101 Dalmatians while also expressing the origins of the most bloodthirsty and ostentatious parts of Cruella herself. In the end, Cruella’s cruel streak shines through. 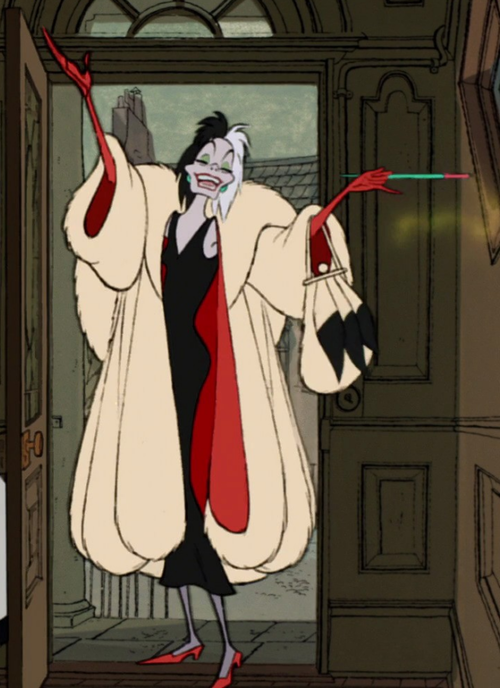 In the ’60s animated Disney movie, Cruella de Vil is the main antagonist, an opposing force to our heroic Dalmatians. She’s given quite the buildup, from Roger’s “Cruella de Vil” song to her smoky, hazy burst into the Radcliffe home’s entryway.

Cruella wears a large, pleated fur coat. Its lining is blood red like her long evening gloves. Underneath she has a tight-fitting, floor-length black dress that accentuates her bony body. The outfit consists mostly of red, black, and white, utilizing the same palette as her younger days. But here we also have the added hints of green. This particular unnatural shade of green represents greed, money, and envy — Cruella desires the rare, luxurious fur of the Dalmatian puppies. She can usually buy everything she wants but when her offer is refused, she is jealous of the Radcliffes’ property and makes her plans to steal them.

Cruella’s outfit doesn’t change at all throughout the film because she doesn’t either. Even nearing defeat, Cruella refuses to change. That stubbornness could be admirable under the right circumstances, but in 101 Dalmatians, it’s downright despicable. 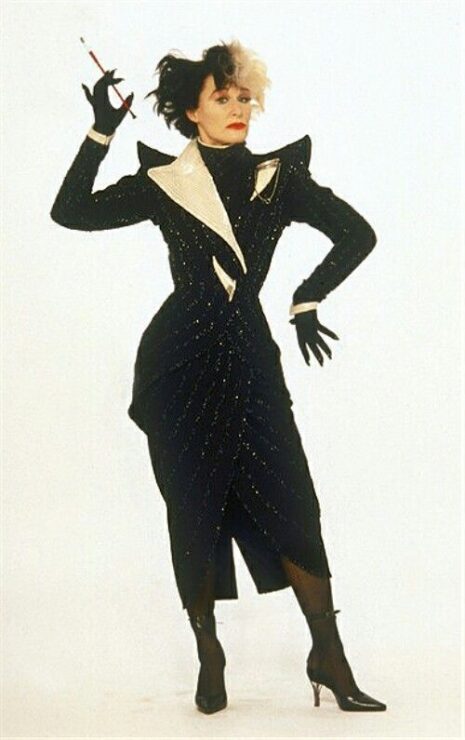 The 1996 live-action remake/modern adaptation of Disney’s 101 Dalmatians brought us a lot more Cruella costumes than the animated original. Take the professional digs above; Cruella is super sharp in a blazer, pencil skirt, and tights. This woman means business. And that’s the point: Cruella de Vil is the boss at a glamorous fashion design company. She covets all types of lavish fur clothing — notably a white tiger. 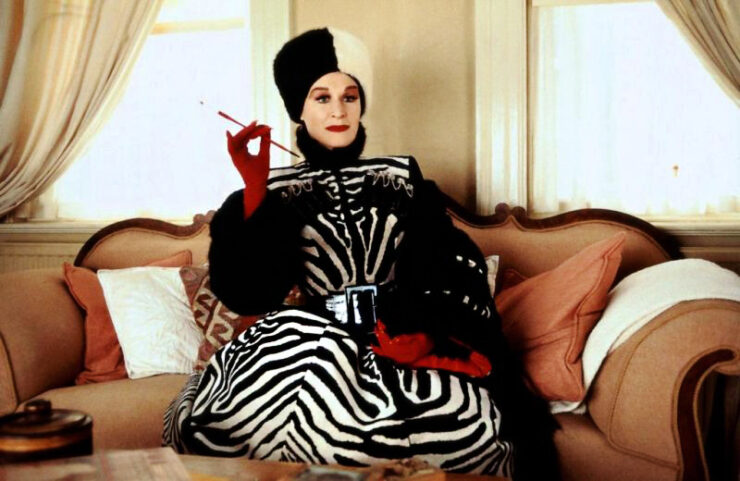 In this movie, Cruella also steals the puppies in order to skin them and make them into a coat. She does all these terrible deeds while appearing extremely stylish and covered in business-couture, such as the clever black-and-white houndstooth jacket pictured below. 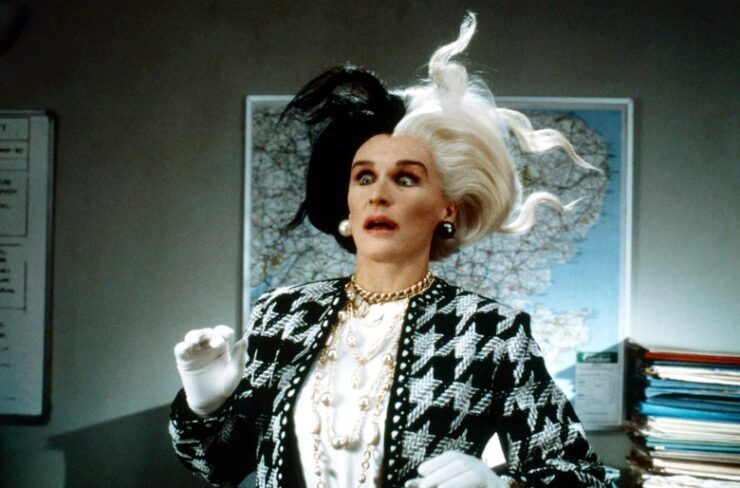 Glenn Close’s Cruella costumes are a vibrant, zany take on the Cruella de Vil character, one that goes on to inspire a sequel as well as the 2021 origin story film starring Emma Stone. 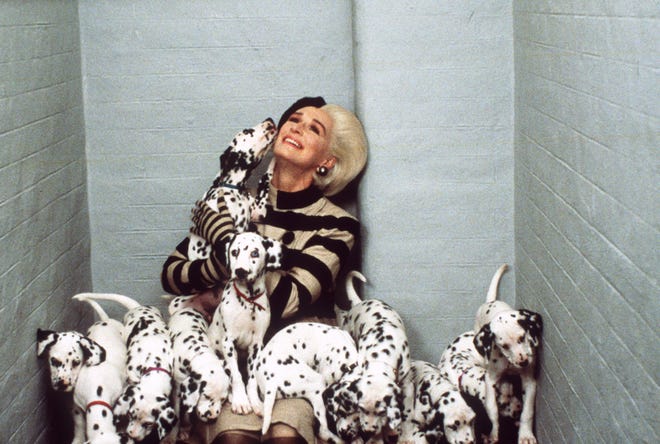 In 102 Dalmatians, Cruella has supposedly been cured of her insatiable desire for fur coats. Her prison uniform is black and white striped, not spotted. She smiles when she’s near Dalmatian puppies. Later, she’s even seen wearing pink florals, pink signifying love and friendship. She’s innocent, folks. 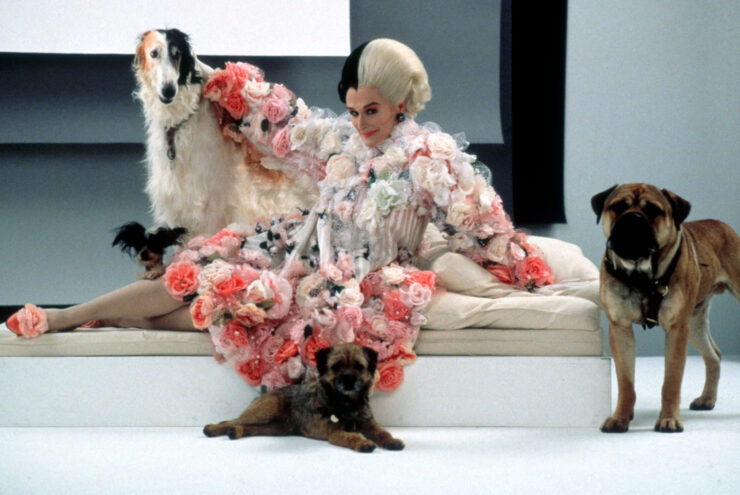 But the tolling of Big Ben reverts Cruella back to her cruel personality, and she desires a fur coat once more. She invites the new Dalmatians’ owners for a dinner party and pretends to be friendly. Her outfit, though, is not. The sequined silk gown she wears is drenched in a fiery red, lined in ostrich feathers. The headdress is tiered flames made of mirror, metal, and painted glass. It’s bold. It’s loud. And it’s as villainous and as close of a reference to the devil that Disney was going to make. 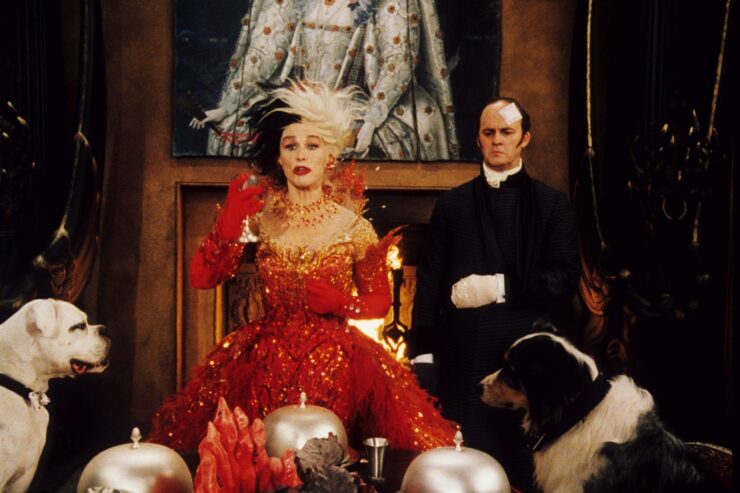 Cruella is, obviously, defeated in the end. She’s baked into a cake and miraculously survives, and it’s funny to consider those baked layers as her final costume. Layered meticulously, falsely sweet, supported by a soft moral backbone. Her plans have been ruined, all her plots cooked. What a way to go — almost ended by her enemies but looking absolutely fabulous as she does it. Even at the very bitter end, Cruella is a style-obsessed woman who has a bone to pick with the world.

What’s your favorite Cruella de Vil costume? Let us know in the comments, and don’t forget to Let Your Geek Sideshow!