The first game in the God of War franchise was released in 2005 for the PlayStation 2 and has since become a flagship property for Sony. The series’ protagonist Kratos is one of the most recognizable characters in gaming. The video games themselves have had a major impact on the character action genre thanks to their fun and aggressive gameplay elements, and the latest release in 2018 was also groundbreaking in its own way. It reinvigorated the series while also reinventing it, changing ideas about what a sequel in a popular franchise could be.

The story changes are most obviously reflected in Kratos himself who is in a brand new place with a brand new look that undoubtedly threw a lot of fans for a loop. Some were surely worried that the character they knew and loved had been turned into a stranger in the effort to reboot the series (Whose voice is this? He has a son now?!). However, players learn early on that Kratos is the same man, just with new motivations. In an interesting way, the game uses one of the series’ most iconic mechanics to demonstrate how Kratos has evolved. 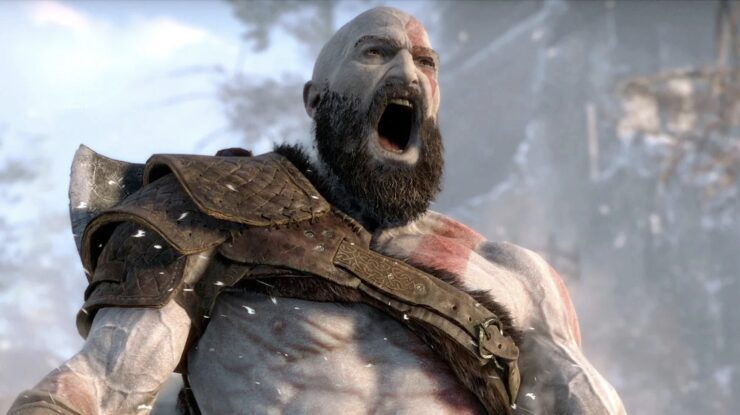 Kratos as we are first introduced to him is a man in his prime. A former Spartan captain, he is muscular and agile, powerful and quick. He is brash and explosive, as is typical of a man of his age, station, and gifts. His circumstances contribute to this brashness, however — Kratos is, more than anything else, full of rage. It’s this characteristic that defines him almost more than his ashen skin and vibrant red tattoos.

This rage is so integral to the character and the series that it’s present in nearly every game as an actual mechanic. Whether it’s called “Rage of Sparta” or something else, the core of the ability remains essentially the same: The player can trigger Kratos’ rage state which allows him to move faster, hit harder, take less damage, and sometimes even heal himself. It would be almost unthinkable to have a God of War game without this mechanic (one does exist, we’re just not going to talk about it). It seems just as impossible to imagine Kratos without this rage. 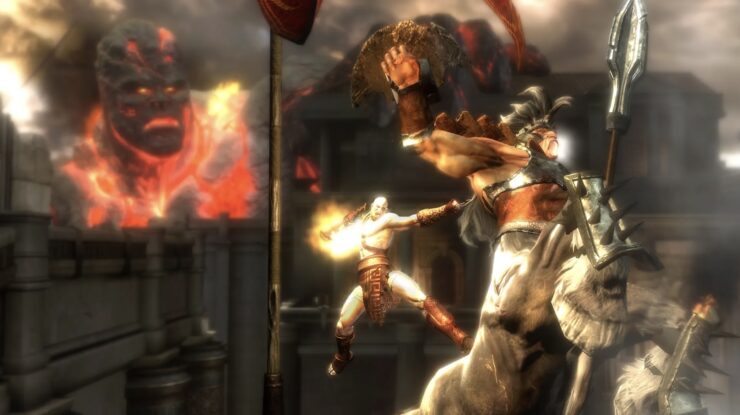 Young, Greek Pantheon-slaying Kratos’ rage stemmed from guilt and grief. His own pride and lust for power led to his most criminal act: the murder of his wife and daughter. Though he was tricked into committing the act, the fact that his hands did the deed never left him. He never forgave himself for it. The first game is a recap of all the favors he completed for the gods, hoping they would honor his service by freeing him from the nightmares of the murder of his family. He does the gods’ bidding to alleviate his guilt, and he does not allow anyone or anything to get in the way of achieving his goal. That rage, the explosive temper that defines Kratos, comes out with lethal effect when he doesn’t immediately get what he wants. Or when he feels wronged. Or when he’s fed up.

In truth, it doesn’t take much at all to trigger Kratos’ rage. He carves a bloody path across the whole of Greece until even the Pantheon itself is completely wiped out. All twelve Olympian gods, dead by his hand because of rage. The mechanic that reflects this, Kratos’ rage ability, is unlocked when he receives a weapon or power upgrade. The game’s systems show that Kratos’ desire to obtain more power — a desire which ultimately killed his family — is inextricably linked to the manifestation of his rage.

Norse Kratos though … his rage is a little different. 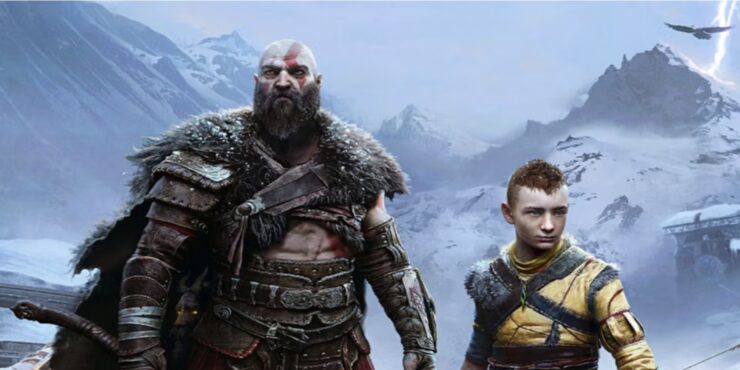 Curiously enough, this older and, dare I say, calmer Kratos of the latest God of War installment is not without rage. The mechanic is still part of the game, and the man himself is also still quick-tempered and volatile. But the difference lies in where the rage comes from now.

This new Kratos is not what fans were used to. He now has a young son despite the fact that fatherhood didn’t work out so well for him the last time around. Kratos is also visibly older. And bigger — he’s enormous, having traded in lean and agile for solid and bruising. There is a weariness about Kratos now and, more importantly, a wariness that hasn’t ever been part of his character.

That’s because this Kratos is afraid. 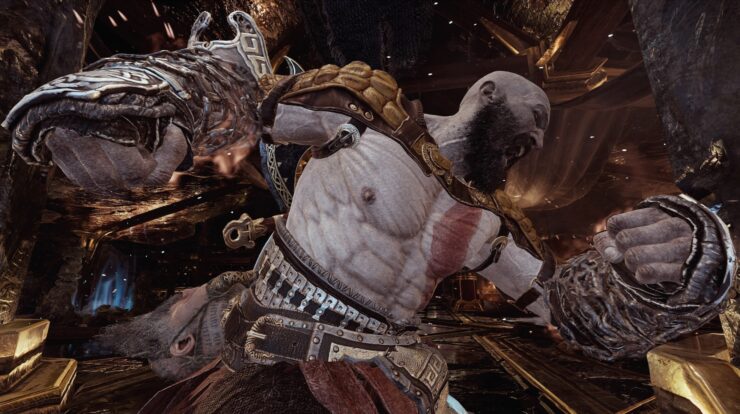 Kratos is afraid of being found by others who might know of his deeds. He’s afraid of how his legacy will come to affect Atreus, his son, and he’s afraid that if the boy knows his history, he’ll despise him. Or worse, turn out just like him.

So while young Kratos’ rage was a product of guilt, Kratos’ rage now comes from a place of fear. When Atreus fires his bow too quickly during their hunting lesson and alerts their prey, Kratos snaps in a way that seems disproportionate to the error. Is he upset that his son isn’t a perfect Spartan soldier? … Maybe. More likely though, he’s afraid that the boy isn’t ready for the journey they’re about to take and the troubles he knows they’ll face along the way.

When Atreus kills Thor’s son Modi and Kratos yells in the boy’s face that there are consequences to killing a god, is he upset that his son disobeyed his orders? Sure. But he’s even more afraid that the gods will seek their revenge at Atreus’ expense. Just as much as he’s angry, he’s terrified that Atreus is becoming more like the man Kratos himself was back in Greece. He knows where that path leads, but allowing Atreus to walk it himself is just as terrifying as cautioning the boy against it.

Using Fear as a Weapon 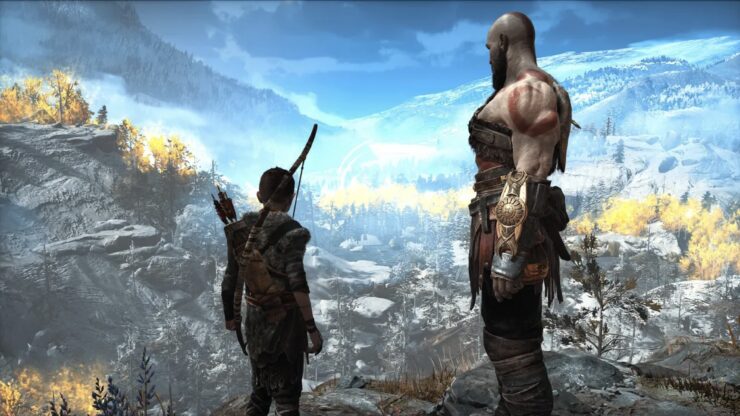 Again, the game’s mechanics help to tell this story. When Kratos’ Spartan Rage is finally unlocked in God of War, it’s not because he gets a new weapon or upgrades his axe but because The Stranger (the game’s first real boss) threatens Atreus. He wants information from Kratos and taunts that he’ll find whoever else lives in the house with him and hurt them to get it. This is when Kratos’ rage takes over — it’s the first appearance of the series’ staple mechanic, and it shows up when Kratos fears for his son’s life.

Even other characters can tell that fear is a driving force behind Kratos’ behavior, made obvious when The Stranger explicitly asks Kratos, “Who are you afraid I’ll find?” The game underlines the idea later on when Atreus is goaded into manifesting his own rage state by Modi and passes out from the stress on his body. When Kratos, who’d been caught in a trap and unable to fight, sees his son fall, the fear of a parent’s worst nightmare coming true sets in and his rage washes over him. He breaks free of the trap, unleashes a beating on Modi, and only calms once he has Atreus in his arms and is reassured that he’s alive.

Ultimately, God of War does something truly special by designing its gameplay to underpin the story it’s trying to tell. Kratos’ rage is as much a part of his DNA as it is the franchise’s.

Will the upcoming God of War Ragnarök expand on this new face of Kratos’ identity? Will Atreus’ rage manifest itself again as he learns more about himself and his powers? We’ll have to wait until the game’s release later this year to find out, but it’ll be plenty of fun considering all the possibilities until then! Keep the conversation going over at side.show/geekgroup, and don’t forget to Let Your Geek Sideshow!

Thor's 7 Mightiest Weapons and Tools of the Trade