Monsters have existed within the human mind for as long as we can remember, and they are often brought to life through myth, legend, and story. But since 1954, one name has towered above all the others.

With the strength of a god and a memorable, dragon-like design, Godzilla has endured to become one of the most celebrated characters of pop culture. Though he is often considered the strongest in his fictional universe, there are actually a few kaiju that rival the King in strength and sheer ferocity. Sure, he may always win, but there were a few times where it looked like he would have been defeated if he hadn’t gotten help from his allies.

Here, we look at 7 of the strongest creatures that have ever gone to the mat with the Big G. Prehistoric animals were all the rage for 1950’s sci-fi. The Japanese film studio known as Toho was delighted to learn that their Godzilla character was a venerable cash cow, and they realized that they had an opportunity to create multiple big monster franchises. Rodan was released in 1956, two years after the original Gojira. This time, the titular monster was based on the form of a pterosaur.

In the film, two of the flying monsters were unleashed from their volcanic hibernation to wreak havoc upon Japan. The creatures produced hurricane force winds with their wings, easily leveling Tokyo and popping aircrafts like fireworks.

A new Rodan was apparently awakened in 1964’s Ghidorah: the Three Headed Monster, and it proceeded to fight Godzilla. The film portrayed most of the fighting with puppets that looked pretty good for their time, and the scenes between the two monsters are some of the most exciting in kaiju history.

While Godzilla was practically invincible, he was confined to the ground. Rodan, on the other hand, could attack from above, so the two creatures were pretty evenly matched – his fight with Godzilla seemed to be a perpetual stalemate. If the monsters hadn’t been forced to team up with Mothra to defeat Ghidorah, then it’s likely that their fighting would never have ended.

From then on, the beasts were allies until the franchise was rebooted with the Heisei series of the 80’s and 90’s. Their battle in Godzilla vs. Mechagodzilla 2 featured more tooth and claw action than ever before, and though Godzilla defeated him in this installment, Rodan was still able to hold his own like a true champion.

Including his original appearance, the colossal pterodactyl has been featured in 11 films, including the upcoming Godzilla: King of the Monsters. This movie promises a brawl unlike any seen before, and Rodan’s relationship with flame and volcano is even more apparent than it was in the first film. He is called “the one born of fire” for a reason, with massive wings that appear to be burning. As usual, the new movie will probably portray Rodan as an equal to Godzilla in terms of strength. By far the most beautiful of the kaiju, Mothra has been adored by many since her first movie in 1961. Before the film was made, Toho hired a few authors to write a novel for a new monster movie, and this book was the basis of the creature’s mythology. The book is very rare, and there are a lot of kaiju fans who wish they could get their hands it.

The book and the film shared the same basic plot, which set the groundwork for what Mothra would be in nearly all other media. She is an ancient creature, a god of the people of Infant Island. Most of the movies show that at least some of these people are the size of Barbie dolls, and their hauntingly beautiful singing can summon Mothra whenever they are in danger.

In 1964, Mothra was pitted against Godzilla for a legendary fight to the death. Using poison powder, wing beat winds, and her six clawed legs, she fought well against the mutant theropod before dying next to her offspring. She was already very old, so this Mothra was defeated a bit more easily than her descendants in subsequent films.

One motif common to the films is that after she is defeated, Mothra’s eggs will hatch into web shooting caterpillars. They are dwarfed by Godzilla, but they are usually able to completely incapacitate him with their nets of silk.

Mothra has appeared in 14 feature films, including some where she is the lead monster. In next year’s King of the Monsters, she’s been updated to appear more sleek and insect-like, and the trailers indicate that her larvae will be also be present. The creatures may even share a special psychic connection with Vera Farmiga’s and Millie Bobby Brown’s characters. 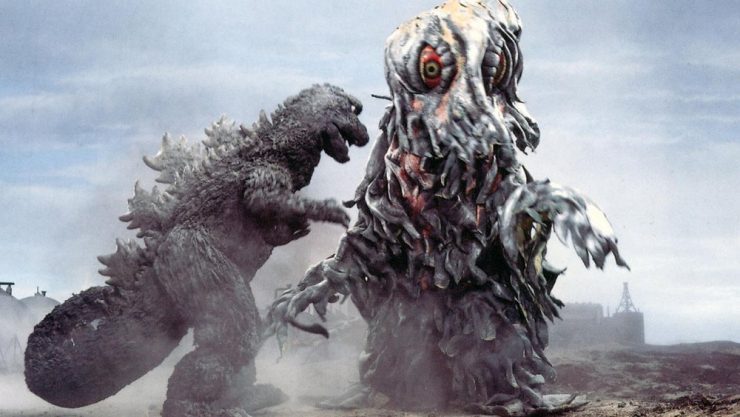 Hedorah, AKA the Smog Monster, was only seen in 2 Godzilla films, but he has also appeared in countless comics and video games. Basically sludge incarnate, he is an alien being that landed in the polluted waters of earth and proceeded to grow by feeding on filth.

His first appearance was in 1971’s Godzilla vs. Hedorah. It was one of the trippiest kaiju movies of all time, featuring partying teenagers, a strong anti-pollution message, and a plot that hybridized lightheartedness with extremely dark, gory horror.

Hedorah could burn whole cities (and Godzilla) with his acid sludge, shoot heat rays out of his eyes, and evolve into multiple forms. These attributes made him one of the strongest foes Godzilla has ever faced, at least for his first appearance.

In his second film, Godzilla: Final Wars, he was killed very easily, but most fans see him as the all powerful collection of space trash he was always meant to be. Mechagodzilla has taken on many different designs, but he is always one of two things: either a deadly robot controlled by aliens, or a super machine constructed by Japan to combat the King of the Monsters.

Appearing in 8 movies (including Ready: Player One), he has a wide array of powers and weapons, including missiles, lasers, heat beams, and blades. Godzilla usually requires a bit of help to defeat him, but there have been a few times when he took on and defeated the bionic creature and other monsters all at the same time.

Mechagodzilla also appeared in the first two anime Godzilla flicks, Planet of the Monsters and City on the Edge of Battle. In Planet, he was destroyed by Godzilla without the chance to even fight, and in City, he was basically a collection of different structures and machines forming “Mechagodzilla City”. 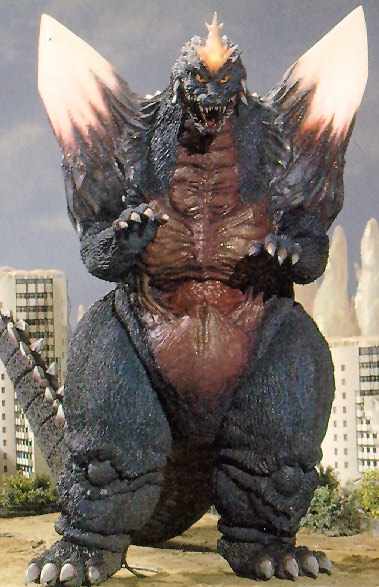 In 1994, Godzilla faced off against a practically unbeatable clone of himself. Space Godzilla was born from Godzilla DNA transported to space by either Mothra or Biollante, and the exploding of stars caused even more mutations in the cells than what the original Godzilla experienced on earth with mere primitive nuclear weapons.

Space Godzilla was similar to the Big G, only much larger. He was composed of powerful crystals that could detach from his body and fuse together on the ground, giving him impressive telekinetic power strong enough to throw Godzilla great distances.

Godzilla was only able to defeat him with the help of MOGUERA, an advanced robot built by Japan. On top of that, Godzilla fought harder and dirtier than ever in an attempt to save his son from the clutches of the terrifying space entity. 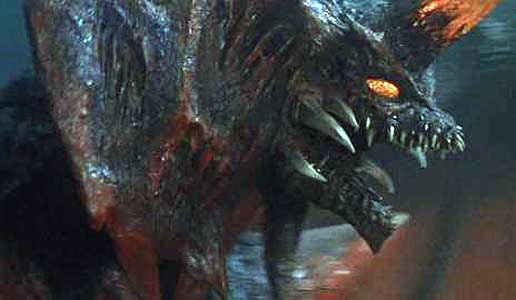 In a way, Destoroyah is Godzilla’s oldest enemy. The original film, Gojira, featured a tortured scientist named Dr. Serizawa. He created a weapon called the Oxygen Destroyer that actually killed Godzilla. The scientist then sacrificed himself in order to destroy all knowledge of this most deadly of weapons. Of course, when it comes to the Godzilla franchise, things are never that simple.

The weapon mutated eons old micro-organisms at the bottom of Tokyo Bay, and after 40 years, they became a group of monsters called Destoroyah. They could take on many forms, eventually merging into a single giant beast.

Like a cross between a crab and a Xenomorph, Destoroyah is one of the most unique designs in Godzilla lore. Powerful armor, a micro-oxygen heat beam, and a lethal horn made this monster one of the strongest creatures in Earth’s history.

Enraged over the death of his son, Godzilla defeated the monster with the help of the military. Shortly afterward, Godzilla’s nuclear energy reached a critical point, and he literally melted down. If Japan hadn’t figured out a way to weaken the process, then he would have actually exploded and destroyed the planet.  After death, Godzilla’s energy gave new life to the corpse of his son, and a new King was born. Three heads. Two tails. Massive wings. Gravity beams. These are the makings of a true monster. King Ghidorah is probably the most popular of all the Godzilla villains, and he could also be considered the most powerful.

Modeled after the legend of Yamata no Orochi,  this gigantic triple threat was one of the greatest feats of the Toho special effects team. Each head and tail moved separately, and intricately designed golden scales christened its entire body. His appearance alone made him one of the most unique creatures in sci-fi, though there were other 3 headed monsters designed afterwards that were probably inspired by Toho’s original design.

His origin varies between a monster from space, a being created by time travelers, and an ancient god meant to protect Japan. Though Godzilla cannot usually defeat him on his own, the dragon’s strength was toned down a bit in Godzilla vs. King Ghidorah, and even more so in GMK: Giant Monsters All-out Attack. Even in those two movies, Ghidorah was still a formidable opponent, and the other films have sealed Ghidorah’s place in history as Godzilla’s greatest foe.

The most powerful Ghidorahs include a four legged version in Godzilla: Final Wars called Keizer Ghidorah, and an even deadlier version in Godzilla: The Planet Eater. That may change this summer, however, as the new Ghidorah in King of the Monsters is promised to be the absolute apex of power.

Who is the King of the Monsters? Is it one of the beasts from this list, or does Godzilla deserve the crown? Let us know in the comments, and Let Your Geek Sideshow!