Comedy and horror are two things that don’t seem to naturally fit together, but some crafty filmmakers have been able to blend the two genres into something that is better than its individual parts. Merging fright and delight, horror comedies give audiences the best of both worlds.

From the early days of film to the present day, the two genres have frequently crossed streams. Sometimes silly, other times satirical, these types of movies have been fan favorites for years. Here are some great films to keep you smiling while the ghouls wander around this Halloween: 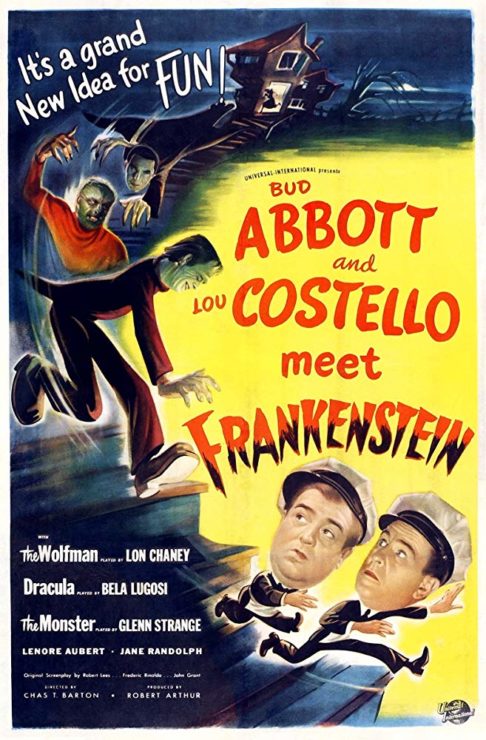 What’s scarier that crossing paths with Frankenstein? Crossing paths with Frankenstein, Dracula, and the Wolfman, too! Decades before Van Helsing tackled these famous monsters in his 2004 film, Abbott and Costello were the first line of defense against these creatures of the night. Two baggage clerks who unwittingly find themselves on the wrong end of a haunted delivery, Abbott and Costello have some hilarious old school scares as they try to keep their jobs.

The pair play off of each other perfectly as they try to avoid falling prey to vampires, werewolves, and the undead. Entered into the National Film Registry in 2001 and topping several respected best-of lists, Abbott and Costello Meet Frankenstein is a great pick for anyone who wants to laugh along with a timeless comedy duo as they encounter classic movie monsters. 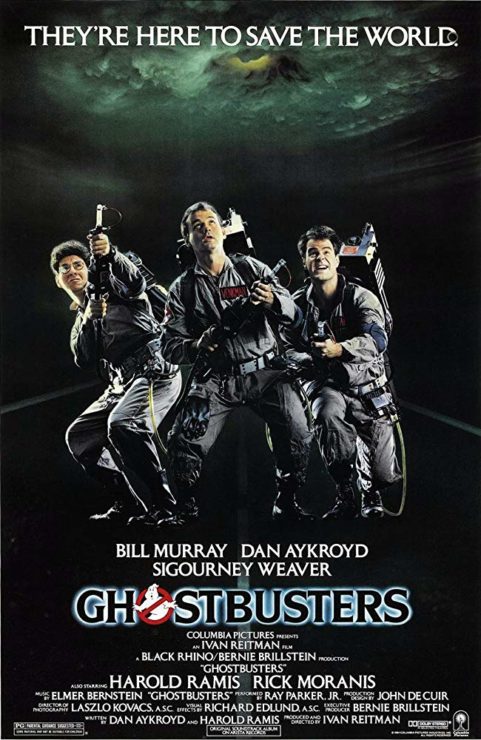 Ghostbusters has become a cult classic at this point in its history, and many readers may already be familiar with the story. But for those who have been out of the loop, Ghostbusters follows the adventures of a group of fringe scientists who discover that ghosts are real and are getting ready to take over New York City. With their revamped hearse, proton packs, and ghost traps, the Ghostbusters set off on an adventure across the city to contain the ghosts and put an end to Gozer the Gozerian, the cause of all of the ghost activity.

Apart from the introduction of the classic Ghostbusters team, this movie also introduces the gross but lovable ghost, Slimer. Ghostbusters is a story so entertaining that people watch it over and over again; and even though the movie was released in 1984, it still holds up. Ghostbusters has spawned a sequel, a reimagining of the story with a female team of ghostbusters, and even a few cartoon series based on the main characters. This is the movie for those who like funny ghost stories with a healthy dose of city living thrown in for good measure. 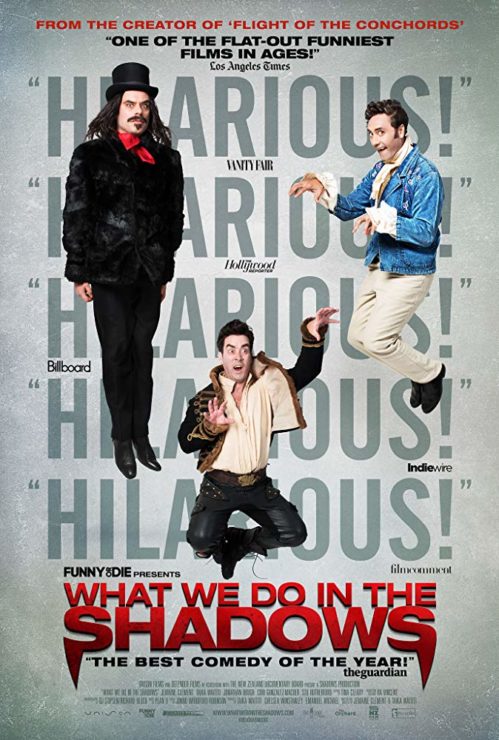 Vampires are people too, and What We Do in the Shadows makes that point abundantly clear. The movie follows a group of centuries-old vampires as they make a series of awkward attempts to fit into contemporary society. Filmed in a documentary style, What We Do in the Shadows offers an up-close look at the lives of four vampire roommates living in New Zealand as they explore the local night life, learn about the internet, have roommate spats, and stalk their prey.

Vladislav the Poker, the leader of the pack, is a former tyrant turned vampire trying to adapt to modern life; but as an 862-year-old vampire, it isn’t always easy. Watching the day-to-day experiences of vampires might seem like a chore, but watching as these ancient beings make their way through the world is even more hilarious than you might expect. 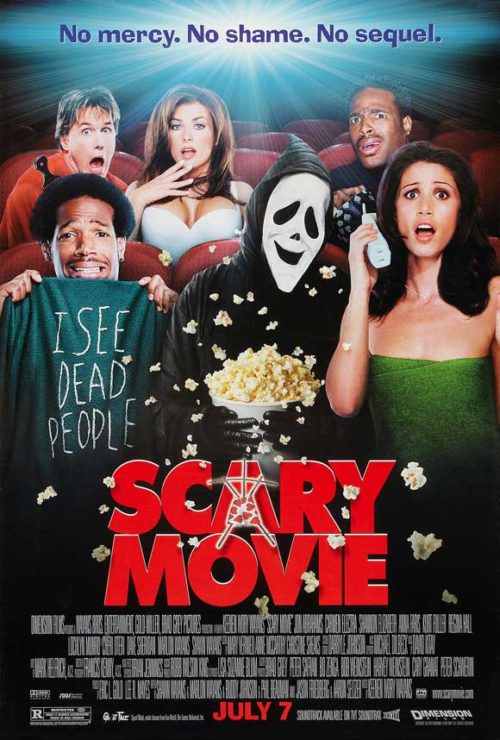 Resting firmly on the zany side of horror movies, Scary Movie is a parody of horror blockbusters like Scream and I Know What You Did Last Summer. The movie follows a group of high school students as they are hunted down by the mysterious Ghostface.

Full of gross sight gags and crass humor, Scary Movie reminds audiences that horror flicks can sometimes be pretty silly. Scary Movie spawned its own franchise that went on to parody other well-known horror movies. So, if you like the first Scary Movie, there’s much more to enjoy with this series.

Tucker and Dale vs. Evil 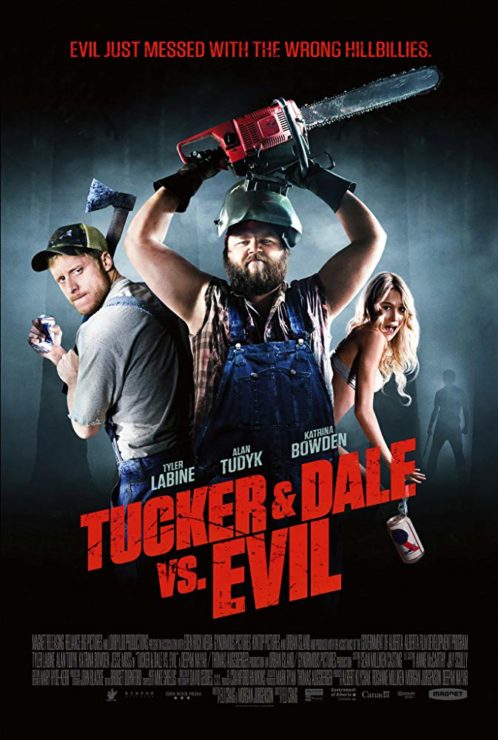 Set in the deep woods of West Virginia, this comedic horror movie begins with a misunderstanding that snowballs way, way out of control. A funny take on slasher films, two working class outdoorsmen—Tucker and Dale—cross paths with a group of college students who are out on a camping trip. The self-described hillbillies and college students must all take matters into their own hands if they are to confront the evil that lurks in the woods.

The results are, of course, ridiculously horrific. Blending in a bit of social commentary that is especially relevant now, Tucker and Dale vs. Evil is as much a movie about class and culture differences as it is a parody of the typical horror movie. For a refreshing take on well-worn horror tropes, it’s worth getting lost in the woods with this group for a while. 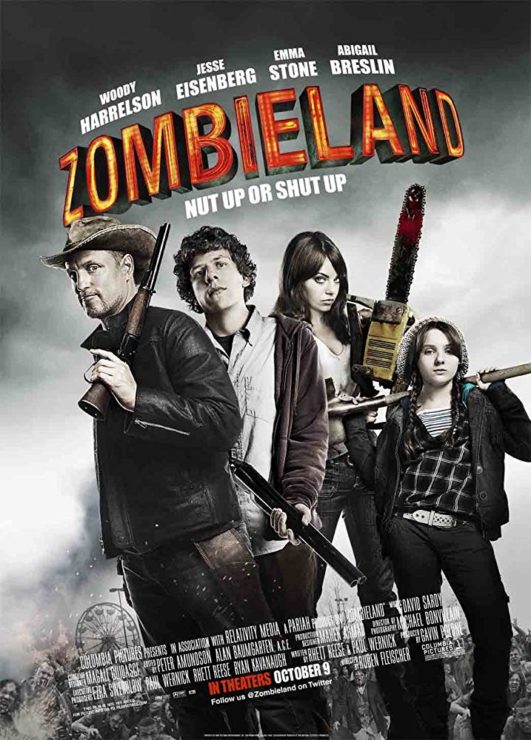 Pushing vampires and werewolves to the side, zombies have made quite a name for themselves in recent years as the go-to monsters in horror movies and TV shows. There’s nothing inherently funny about zombies. After all, they’re walking corpses with a taste for human brains; but Zombieland turns that idea on its head. With a story that’s part post-apocalyptic road trip and part zombie thriller, there is a lot of fun to be had in Zombieland.

In the wake of a viral outbreak that stalls civilization, two survivors—Columbus, and his Twinkie-obsessed partner, Tallahassee—make their way across the southern United States in search of safety. As they travel, they make new friends, a pair of sisters nicknamed Wichita and Little Rock. Danger lurks in every corner, and the group must eliminate any zombies that get in their way. They’re on a quest to get to Pacific Playland, an amusement park that is supposedly free of zombies.

As the story unfolds, we learn more about this unlikely group and what drew them together. There are lots of tense moments and laughs in Zombieland as the group fights to reach its final destination. A movie packed with both hilarious and horrific surprises, Zombieland is the perfect movie for anyone who needs a break from the typical zombie fare.

Something magical happens when laughter eases the tension in a horror film, and these movies should hit the spot for anyone looking to get into the holiday spirit with a smile this Halloween.

Do you have a favorite comedic horror movie? Which scary movie had you dying with laughter? Let us know in the comments below!