[SPOILER ALERT: The following contains spoilers for Episode 2 of Loki on Disney+]

Last week, “Glorious Purpose” introduced us to the bureaucratic agency known as Time Variance Authority (TVA). It is an almost all-powerful organization—only taking orders from the Time-Keepers who are responsible for keeping the Sacred Timeline intact.

The TVA usually “resets” variants, those who break away from their place in the timeline, but after capturing Loki, agent Mobius (Owen Wilson) makes other plans for their prisoner. The TVA needs Loki (Tom Hiddleston) alive to help them track down another more dangerous variant. It turned out that variant was none other than an alternate version of the God of Mischief himself. Even more shocking than that was just who that time-alternative Loki could possibly be.

We all had our guesses on which Loki alternative we’d see at odds with the original (actually, also a variant, but our protagonist). Well, episode 2 just aired and confirmed a popular hypothesis. “The Variant” also gave us so much more to digest and discuss.

Here are the biggest takeaways from episode 2 of Loki. 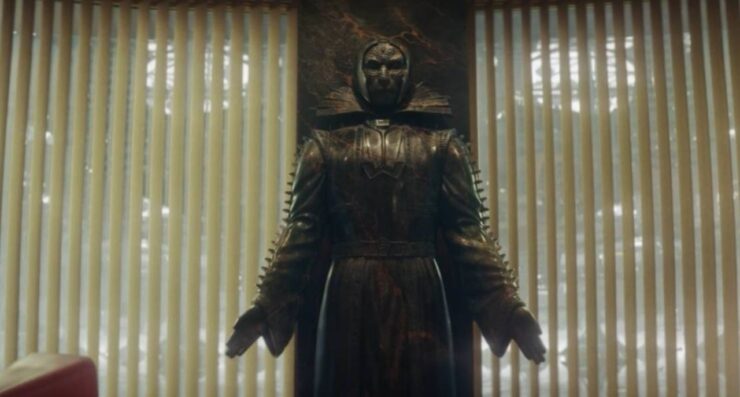 Time-Keepers. Space Lizards. TVA board of directors. Really, the only thing we know about the ones responsible for keeping the timeline intact is what they look like (thanks to these ominous statues scattered throughout the TVA) and stories of them told by others. We’ve never actually seen them in the flesh, and after this week’s episode, it doesn’t seem like anyone else has either.

Top TVA analyst Mobius hasn’t seen the Time-Keepers for himself. Never. He asks Judge Ravonna Renslayer (Gugu Mbatha-Raw) how “the old Time-Keepers” are, and admits he has no idea how they would be because he’s never met them. Seeing how Mobius is the best agent in the TVA, it’s strange someone at his level has never met them. Has Renslayer actually met them? Has anyone?

Mobius doesn’t seem to be particularly suspicious of this, but Loki doesn’t share his trust. The Asgardian has serious suspicion about the chronal trio. Instead, he attempts to learn about their origin and the beginning and end of the time for himself in the TVA library. He questions Mobius, poking holes in his reasoning. “I mean, you really believe in all this stuff, don’t you?… Three magic lizards… created the TVA, and everyone it… including you?”

Something is particularly fishy with these guys. Where are they? Why has no one but Judge Renslayer been in contact with them? Are they really the good guys?

The Loki Variant Has Been Hiding in Apocalypses

Mobius may not be too sharp about the Time-Keepers, but he was smart to enlist Loki’s help. Sure, he had to deal with Loki’s usual antics (constantly trying to pull a fast one on him and his crew), but halfway through Episode 2, Loki makes a significant crack in the variant case.

Loki discovers his alternative has been hiding in apocalypses. It’s the perfect location to avoid detection from the TVA since there would be no implication from a variant’s actions. You can’t influence the end of the world, because all the consequences are wiped clean. Pretty smart. And pretty cool for us watching.

It’s all making sense now. The trailers were full of alternative Lokis in the strangest scenarios from the past and present. We can look forward to seeing President Loki and perhaps King of Asgard (we see him in the Asgardian throne room in the trailer) creating chaos on doomsday.

Yup, the Variant is Lady Loki

Welp, it’s official now. We didn’t have to wait until the season finale to see who this extra dangerous Loki variant is. Like many of us suspected, the TVA is after *drum roll* Lady Loki. And she is awesome. Scary, smart, and two steps ahead of Loki and the agents after her.

Still, it’s hard not to root for the variant. After all the suspicion aroused by Loki, all the creepy statues, and Lady Loki battling TVA agents while Bonnie Tyler’s “Holding Out For A Hero” plays, we’re starting to think she isn’t as terrible as she’s being made out to be.

“That no one bad is ever truly bad. And no one good is ever truly good.” Is this quote from Loki a not-so-subtle hint from Marvel about the possible Asgardian princess?

Either way, whether she’s good or bad, she’s most likely on her way to the Time-Keepers: Hunter C-20 comes out of Lady Loki’s enchantment and, petrified, tells Mobius she has told Lady Loki how to find the Time-Keepers. It could be why the variant detonated time bombs across the Sacred Timeline and sent TVA hunters scattered throughout new branching timelines. It leaves the TVA office completely vulnerable…

(Of note, the Castellan Spanish credits on Disney+ credit the character as “Sylvie,” which is a name that some Asgardian aficionados may recognize as the second woman to take on the name Enchantress, thanks to Loki’s meddling and granting a Midgardian magic powers. Coincidence? Only time will tell…)

Where and When Did Loki Escape To?

Loki, our Loki, got away. The sky is blue. What else is new? Everyone warned you, Mobius. At least for us viewers, it came as no surprise to see Loki escape through a time portal at the end of “The Variant,” so it should come as no surprise to the agent who claimed to have known the Asgardian’s whole life.

Loki escapes moments after coming face to face with Lady Loki. The two exchange digs and blows, arguing over which is the “superior” version, but ultimately it’s the female variant who manages to successfully attack the TVA. Because of her, male Loki can get away, follow her into a time portal going… well, we’re not sure. Lady Loki could be headed many places: to the TVA headquarters, to the Time-Keepers, or to another apocalypse.

Like Mobius questioning Loki’s intent in “Glorious Purpose,” we can only guess whether Loki will help or try to defeat the other variant. Will his glorious purpose be to take down the TVA, become ruler of all space and time, or will he, like the mature version of himself who died redeemed in Avengers: Endgame, grow up and do the right thing? Fight for the greater good (although, we’re still not sure what that is in the series)?

Time’s ticking, Loki. We’re ready to see which side you choose to fight for.

What did you think about Episode 2 of Loki? Which moments were your favorite? Let Your Geek Sideshow and let us know your thoughts in the comments!