What would DC Comics be without Mr. J and his Harley-Girl? A bit bland and lackluster if you ask Harley Quinn fans. That’s because the demented duo adds a certain pizzazz wherever they go, wreaking havoc in Batman’s domain as well as on each other.

The couple is certainly everything but “relationship goals.” Their dynamic is truly disturbing—in a way very much attuned with the Joker’s own psychotic sensibilities.  It’s a match made in hell and considered a cornerstone in DC canon, but it hasn’t always been so throughout the publication’s history. It’s relatively new.

So, when and how exactly did these two clowns fall for each other? Is The Joker in fact in love with Miss Quinzel or is she simply a ploy to help him get to his true love, Bats? Stick around while we revisit the sinister history of The Joker and Harley Quinn. In words true to Harley: this is one helluva couple!

The Introduction of Harley Quinn 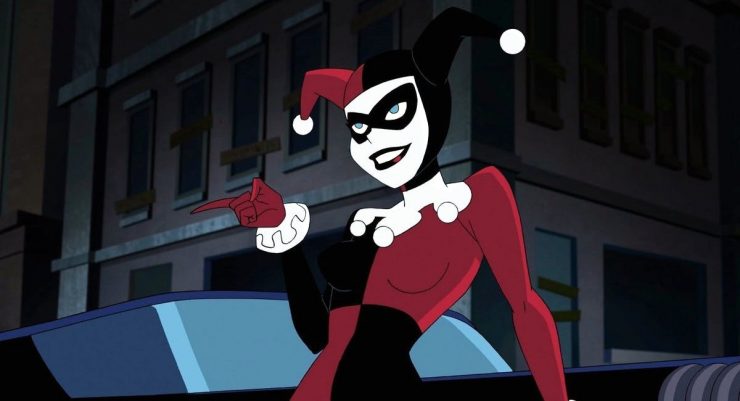 Harley Quinn is a force of her own. Fans who once embraced her as Joker’s lovesick sidekick have seen her popularity grow exponentially. With Suicide Squad, her own comic series, and the soon-to-be Birds of Prey film, it looks like our girl is almost outgrowing Joker. However, her recent independence could not be further from her origins.

Harley first appeared in 1992 in Batman: Animated Series’ episode “Joker’s Favor”. This is a whopping 52 years after Joker’s own debut appearance. In this episode, she is portrayed as another goon working for The Joker. Perhaps, a lil smitten but a lackey to the Clown Prince of Crime nonetheless. To DC’s shock, fans zealously embraced its new character, who was intended to be a one-off, and this created a need for a true origin story.

The Start of a Manipulative Love 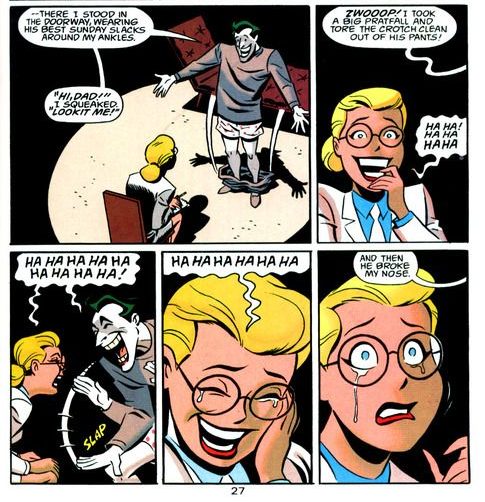 Harley’s true origin story is told in the graphic novel, The Batman Adventures: Mad Love. Doctor Harleen Frances Quinzel is a brilliant student at Gotham City University who had even won a scholarship. During her psychiatric studies, she took on an internship at the notorious Arkham Asylum to study the criminally insane.

However, it’s important to note that Dr. Quinzel was no angel, even before meeting The Joker. In fact, Harley is portrayed as all too eager. Perhaps to exploit the mental asylum’s patients. She’s hinted to be a conniving opportunist, as she plans to write a tell-all book about the patients to gain fame.

Cue The Joker. Harley stood no true chance of manipulating him. After all, he is the master of all manipulators with many criminal years under his belt already. Thus, The Joker knows just the right words to use on the newcomer and how to pull his soon-to-be girlfriend’s heartstrings. He does this by fictionalizing a personal tragedy that makes Harley feel sympathetic for the madman.

By the end of the comic, Harley has lost the last bit of her sanity. She’s taken up the name The Joker had used during their first encounter: Harley Quinn. She is a woman who hates Batman as much as The Joker. And she’s fully mental…for her puddin’ that is. 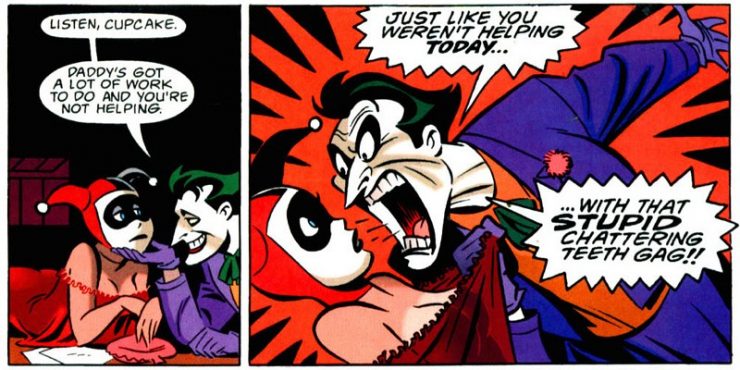 It’s apparent from the start. Harley is one lovesick gal willing to go the extra mile to see her beau happy. The honest truth, she soon realizes, is that the only thing that will genuinely make the Clown Prince happy is not her. It’s Batman. The Joker is willing to put Harley on the back burner as long as it means he’s one step closer to finalizing an ingenious and whacky plan to lure the Bat to his death. Actually, he doesn’t need any real excuse to push Harley aside or to berate her.

Oddly enough, Harley translates The Joker’s indifference to her advances as Batman’s fault. The Joker would have time for her if only the Bat were gone. In the animated series, she goes so far as to lure and catch Batman, ready to kill him with piranhas. To her shock, her puddin’ is anything but thrilled by this when he finds out. He smacks her so hard she goes flying out the window.

But maybe the Clown Prince of Crime truly does love Harley? In the graphic novel, Batman: Harley Quinn, The Joker admits he has feelings for his Harls. How does he react to these feelings? He launches her into space to rid himself of this “distraction.”

The Joker’s henchwoman is by no means innocent. This is no girl any mother wants their son to bring home. And sometimes, when Mr. J hits, Harley Girl hits back. Out of many retaliations, Harley’s worst deeds might be her “extramarital” affairs. Well, technically Daddy’s Little Monster wasn’t with her longtime-boyfriend when she and Deadshot developed an intimate relationship. Yikes! Guess the Harls got the last laugh here.

Deadshot is no one The Joker wants to come second to. His ego demands Batman’s full attention. This, along with Deadshot’s lethal abilities, makes him one worthy opponent. It’s no wonder why The Joker couldn’t stop thinking about it after Harley brags about her exploits in Batman: Assault on Arkham.

That’s not even half of Harley’s betrayals. Ultimately, the worst thing she’s managed is slitting Mistah J’s throat. You know, nothing too crazy. In Injustice: Gods Among Us our girl Harl comes so close to getting everything she’s ever wanted: marriage to the Joker. Yet, she snaps during their wedding reception.  The game’s narrator explains, “As her new husband playfully mashed her face into the cake, years of abuse took its toll.”

This is no power couple- not by a long shot. The Clown Prince of Crime and his devoted girl have proved two wrongs (or crazies) don’t make a right. It makes for a match made in hell.

Only time will tell what becomes of the killer clown couple. Will Harley further distance herself as the new Birds of Prey movie title suggests: Birds of Prey (and the Fantabulous Emancipation of One Harley Quinn). Or will we find out a girl only needs her puddin’ to survive?

Let Your Geek Sideshow and tell us what you think in the comments below!  Plus, learn more about Harley’s origins and evolution in our Harley Quinn- Then & Now podcast episode.

Ian Ziering Cast as Blue Devil in DC's Swamp Thing, Netflix Developing I Am Not Okay With This Series, and More!