We’ve crossed the threshold into penultimate episode territory on Disney+’s Ms. Marvel. Last week’s outing, “Seeing Red,” found Kamala in Karachi, where she met Kareem, AKA Red Dagger, and Waleed, who filled in the blanks regarding Aisha and the ClanDestines. Unfortunately, Najma and the others broke free from the DODC maximum prison, fleeing to Karachi to confront Kamala. What transpired next was a high-octane, high-speed chase through the city, culminating in Kamala traveling in time to 1947 during Partition.

“Time and Again” might seem slow at times, but it’s a poignant, impactful deep dive into Kamala’s family history and a step in healing intergenerational trauma. While Najma and the ClanDestines were the “villains” to a degree, Ms. Marvel is an origin story. Antagonists are irrelevant and secondary to Kamala’s inner growth and evolution as a super hero.

Honor and duty to one’s family are critical themes of this series, so it’s no surprise Kamala’s deeply connected to her heritage. It shapes who she is and is, rightfully, a point of pride and strength.

Journeying Into the Past

The episode opens with black and white footage detailing India’s independence from British colonial rule on August 15, 1947. With this independence, Partition created a separate dominion, Pakistan, for Muslims. A mass migration of Muslims followed. We also see footage of Jawaharlal Nehru, who served as India’s first prime minister.

Then, we go back to British-occupied India in 1942, with Aisha fleeing from a British soldier. She stabs him with a knife (very similar to Red Dagger’s technique) before finding sanctuary in a nearby village. She observes while Hasan, a Muslim activist, delivers a stirring, motivational speech to a swelling crowd of supporters, urging them to take their country back from the British. 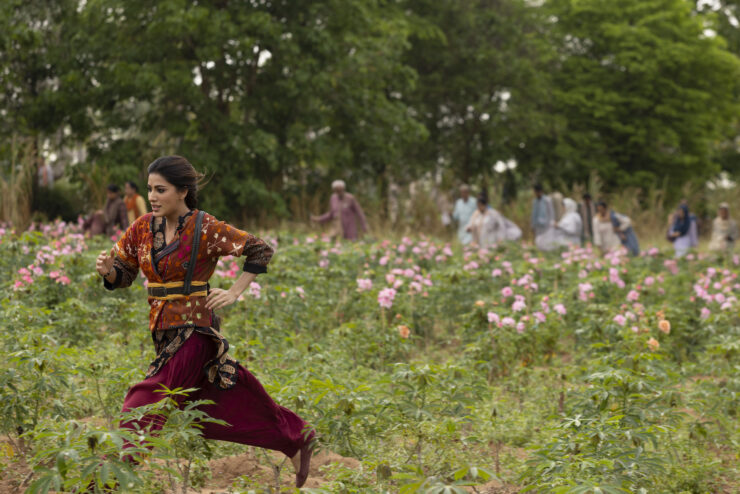 Hasan finds Aisha sleeping in his rose garden, so he invites her inside his home. Initially, she refuses his hospitality, but when night falls, Aisha takes shelter with Hasan, who makes her paratha. Who can resist the effortlessly charming Fawad Khan?

Hasan recites a line from his favorite poem by Rumi, “Out beyond the ideas of wrongdoing and right doing.” He follows it with a famous Rumi quote, “What you seek is seeking you.” If you recall, Waleed translated the inscription on Kamala’s bangle in last week’s episode to that quote. 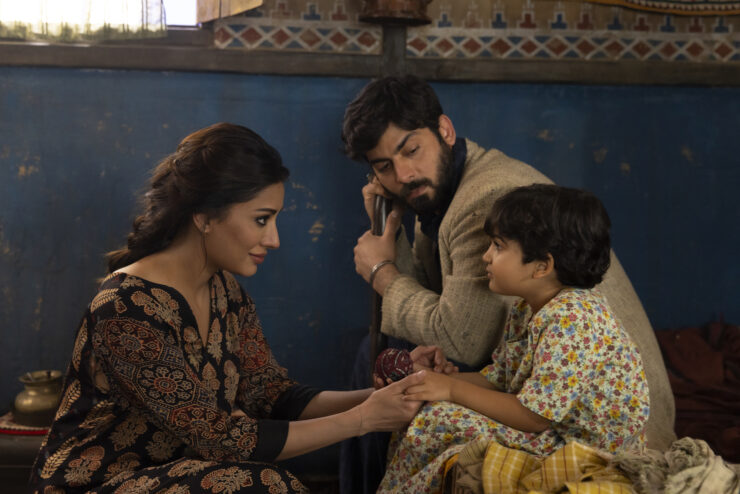 Sparks fly between Aisha and Hasan, and we fast forward to a later date when Aisha has a baby bump. She gives birth to Sana, Kamala’s grandmother. While singing to an infant Sana in Urdu, the camera lingers on Aisha’s bangle.

A friend of the family, Rohan, brings milk and vegetables for them. Aisha accepts the food, but Hasan orders Rohan to keep his charity. We hear about some of the hardships he and Aisha face for being Muslim, including vendors refusing to sell them food.

Aisha reunites with Najma outside her home after they parted ways five years before. Najma believes it’s time to implement their plan to return home to the Noor dimension. You can see the hesitancy on Aisha’s face as she tells Najma she must uncover the bangle after concealing it in a safe space. Najma gives Aisha a day to retrieve it.

“We can build a home anywhere.” 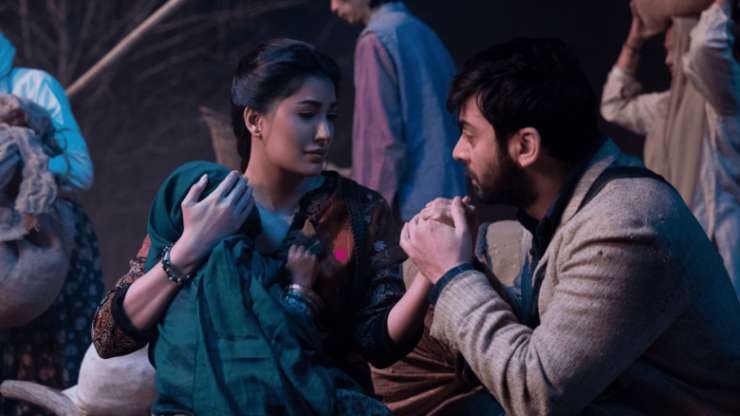 Aisha persuades Hasan to board the train to Pakistan as tensions boil over in India, notably violence against the Muslim community. Hasan is reluctant to leave, revealing that his father constructed the house in which they live. However, Aisha reassures him they can build a home anywhere as long as they’re together.

Later, Aisha gives Sana her bangle, encouraging her daughter to use it to protect herself. Aisha, Hasan, and Sana join the mass of people migrating to Pakistan. Aisha finally reveals to her husband the bangle’s capabilities, confirming something he knew all along — she’s magical. Hasan vows to stand by her side no matter what. Now might be the time to reach for the tissues if you haven’t already. 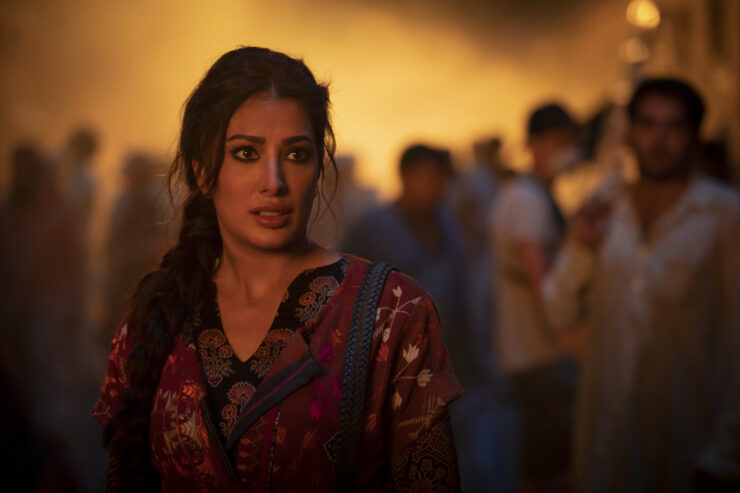 Aisha urges Hasan to ensure Sana gets on the last train bound for Pakistan. They part ways, much to Hasan’s dismay, and little Sana runs after her mother, losing Hasan in the process. Najma tracks down Aisha, accusing her of betraying her family of ClanDestines. Suddenly, Najma stabs her and promises Aisha she’ll find the bangle one way or another.

Hasan continues searching for Sana while Aisha, bleeding out, stumbles off to the side of the crowd. She clutches a photo of her family, reciting the Rumi line, “What you seek is seeking you.” Her eyes glow while the bangle emits a purple light in Sana’s hands. The little girl drops it while still crying out for her mother.

Kamala arrives at this moment, and she encounters her great-grandmother. Aisha, dying, mistakes her great-granddaughter for Sana. Kamala tries to save Aisha, vehemently stating that, according to Sana’s story, Aisha is the one who leads Sana to Hasan. Aisha gives Kamala the photograph of her family, reassuring Kamala that Sana will be safe because of Kamala’s presence.

Next, Kamala finds a sobbing Sana and utilizes her bangle to create plasma steps that’ll lead the girl to her father. Unfortunately, someone inadvertently shoves Kamala, and she loses her balance, causing the steps to vanish. Thankfully, the “trail of stars” emanating from the bangle Sana dropped acts as a beacon for Hasan, leading the father-daughter duo back to each other.

Kamala realizes she saved her grandmother. What a neat little twist. She watches while Hasan and Sana board the last train to Pakistan.

Returning to the Present

Kamala wakes in the present with Kareem, Najma, and Fariha. Fariha walks toward a portal of light that opens before them, AKA the Veil of Noor. However, when she touches it, she disintegrates instantly. Kamala tries to use her powers to close the Veil but to no avail. Instead, she creates a barrier between the Veil and the innocent bystanders and urges Kareem to help said bystanders escape.

Najma tries to access it, but Kamala stops her, begging her to think of Kamran. She can’t leave him alone. Najma admits to leaving Kamran behind and acknowledges Kamala’s declaration that Najma took away Aisha’s dream of being with her family.

Najma insists she knows how to close the Veil. She steps near the light, and Najma calls out for Kamran as it incinerates her. We see her eyes glow while the Veil closes. 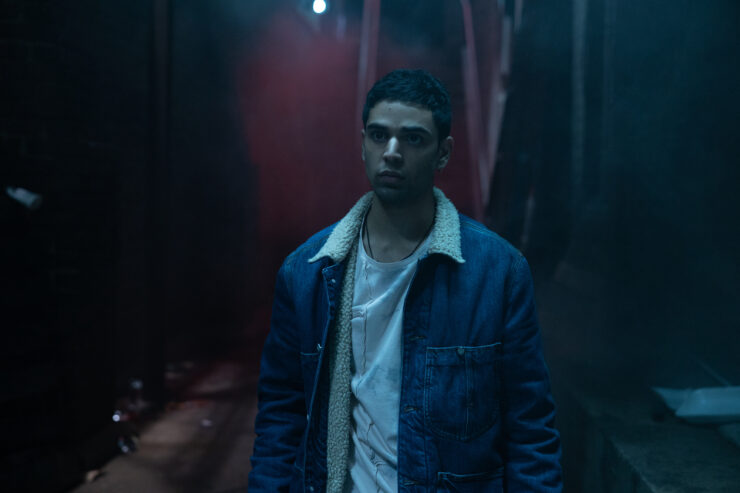 Kamran feels his mother’s departure, which unlocks his Noor-fueled abilities, and they look almost identical to Kamala’s powers.

Meanwhile, Muneeba and Sana reunite with Kamala, and Kamala hands Sana the photograph Aisha gave her as proof of where she went. Muneeba realizes her daughter is the super hero saving the day in New Jersey, and you can see her beaming with motherly pride.

Before they depart, Kamala bids farewell to Kareem. He gifts her with his red scarf and encourages Kamala to call him when she needs assistance. Muneeba and Sana find Kamala’s broken gold bracelet on the ground, and the break in the chain resembles a particular lightning bolt symbol on Ms. Marvel’s costume. The red scarf also looks like a specific scarf Ms. Marvel wears around her neck. Hm… 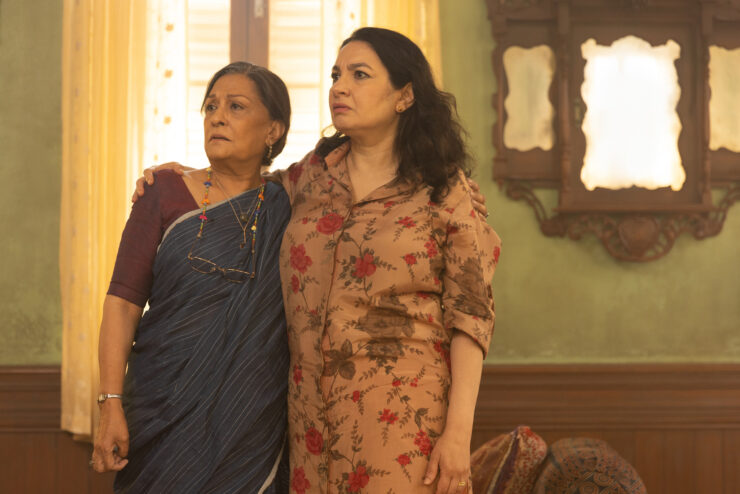 Muneeba, Sana, and Kamala look through family photo albums, and Kamala learns all about Muneeba’s rebellious side (and her Bon Jovi obsession). Muneeba admits she’s extra hard on Kamala because she doesn’t want to lose her daughter, while Sana apologizes for letting Muneeba slip through her fingers.

We see three generations of strong women forge a deeper bond and heal the intergenerational trauma embedded in the family for decades. It’s a sweet scene.

Kamran seeks out Bruno for shelter after escaping the DODC maximum prison. Bruno allows him to spend the night. Kamran insists he must stay longer since the DODC will be tracking him, and he should be where his mother can find him. Bruno doesn’t believe Najma will return for Kamran, especially after she abandoned him at the prison.

After apologizing for calling Bruno “Brian” and mending fences, Kamran spots the DODC’s drone lingering outside Bruno’s room. Uh-oh. Suddenly, Kamran lets out a powerful blast from his hand in the drone’s direction, shocking Bruno. Then, we see the Circle Q explode. Double uh-oh.

“Time and Again” sets the stage for next week’s series finale, which begs the question: What’s next? Kamran and Bruno are stuck above the Circle Q after it exploded, so they’ll have to contend with the DODC. Kamala and Muneeba will likely return to New Jersey, and our heroine will face off against the DODC to save her best friend and love interest. Of course, she’ll also have to relay the news of Najma’s death to Kamran.

Additionally, we might see the completion of Kamala’s Ms. Marvel costume, plus her deciding on an official super hero name. Ms. Marvel does an excellent job of methodically constructing Kamala’s costume, implementing elements of Kamala’s identity and those who contribute to her story, from Waleed’s turquoise vest and Bruno’s domino mask to Kamala’s signature red Converse and Kareem’s crimson scarf.

These Disney+ shows are far too short, so here’s hoping Ms. Marvel snags a second season. This series is too endearing and charming not to get a season 2.

What was your favorite moment from “Time and Again?” Join the conversation alongside other Ms. Marvel fans in the Let Your Spoiler Sideshow Facebook Group, and don’t forget to Let Your Geek Sideshow!