Marvel Studios’ Shang-Chi and the Legend of the Ten Rings (2021) amazed audiences with its rich blend of culture and superhero lore. In addition to stunning martial arts filled action sequences and gorgeous modern and historically based Chinese costumes, the film also boasts an impressive list of VFX vendors. These artists were tasked with many of the visual displays in the film, including the legendary land from which Shang Chi’s mother, Ying Li, hails.

Hidden in an enchanted bamboo forest, Ta Lo — based on a fictional location in Marvel Comics — is a mystical heavenly realm inhabited by impressive beasts created by the German VFX studio Trixter. These rumored residents initially inspire Wenwu to search for the place. And although this character and the place itself are fictional, those creatures that fill Ta Lo are based on Chinese folklore that far predates any comic book. Let’s break down the inspiration and designs for the Ta Lo creatures below. 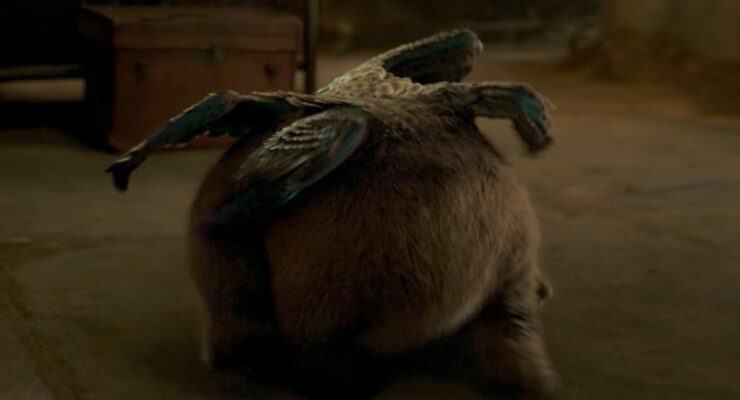 Surprisingly, one of the standout characters in the film is a faceless, six-legged furry and feathery friend named Morris. Physically, he’s kind of a pig, or maybe a headless wombat, and also kind of a chicken with those little wings. His mannerisms, though, are somewhat puppy-like. A curious companion to Trevor Slattery and a guide toward Ta Lo, Morris actually resembles the primordial Chinese mythological beast known as Hundun.

As described in the Shan Hai Jing text, Hundun of Chinese mythology is, essentially, the god of chaos. Hundun is chaos itself — not trickery and mischief like Loki, but rather the void state that preceded the creation of the universe.

Semantically, Hundun began as a reference to the nebulous world before the separation of earth and heaven. Later it came to mean, among a few other definitions, “unintelligible” and “innocent as a child.” These phrases describe Morris and the other Hundun well. No one but Trevor can understand the creature’s high-pitched purrs, and Morris is also extremely sweet and friendly like a kid. His directions to Ta Lo are a little unpredictable, and his roundness as well as his facelessness represent infinite moments of possible change and new creation — hence his adventures into the wider world, and his role in siblings Shang-Chi and Xialing’s journey back to their ancestral home. 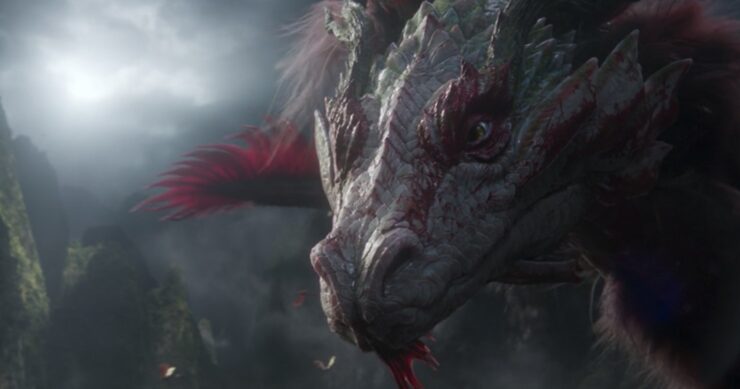 Also known as loong, dragons are perhaps the most universally recognizable of mythological creatures. They traditionally symbolize auspicious powers and are thus associated with luck, as well as control over water, rainfall, typhoons, and floods. Which makes sense since the Great Protector from Shang-Chi is a water dragon that lives beneath Ta Lo’s great lake. Dragons also have a strong connection to other parts of nature, and the inhabitants of Ta Lo share that affinity for natural powers as well as harmony with their environment. 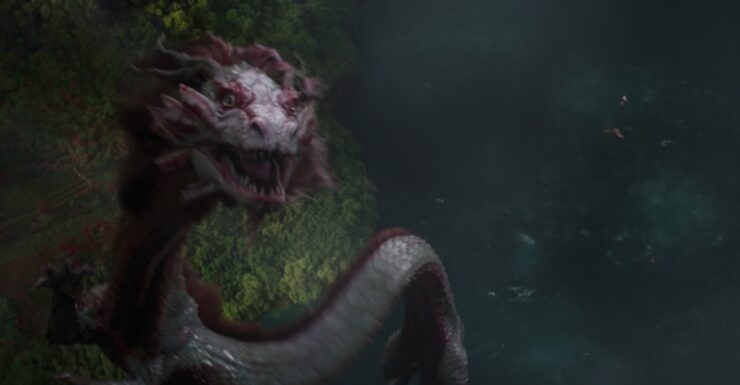 The Great Protector is depicted in the classical Chinese style as graceful and serpentine with four legs and no wings. She is white and red in color, with nearly indestructible and impenetrable scales that the people of Ta Lo use for armor. This creature is massive, with horns, claws, and rows of razor-sharp teeth. There are softer, feathery groupings of fur along a ridge on her back as well as her tail and head. When Shang-Chi and Xialing ride this dragon, they do so close to her eyes and face, not on its back as you might expect in a Western tale.

Although this creature superficially resembles a Western phoenix, that is not the case. This is a Fenghuang, a bird that reigns over all other birds. Its physical form is a composite of many different real birds including the golden pheasant, mandarin duck, peacock, crane, parrot, and swallow. And as so succinctly pointed out by Trevor, these birds are on fire. In Chinese mythology, the bird is sometimes shown this way, and other times it is simply shown with a fireball near it. They are also closely associated with dragons. 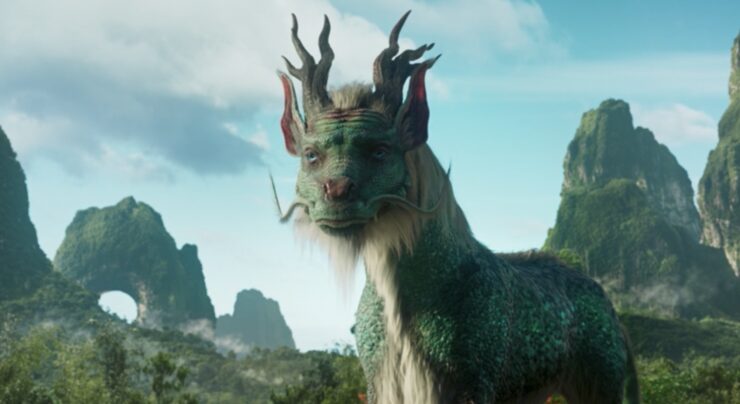 A cloven hoofed, chimerical creature from Chinese legends, the qilin has antlers like a deer and brilliant, jewel-toned scales like a fish or dragon. As we see in Shang-Chi, its face is similar to that of a dragon, and it’s labeled as a “weird horse” by our comedic relief character. Historically, the qilin more aptly resembles the giraffe. In the Ming Dynasty, the association between the real-life and fantastical beasts equates them both to greatness and power. 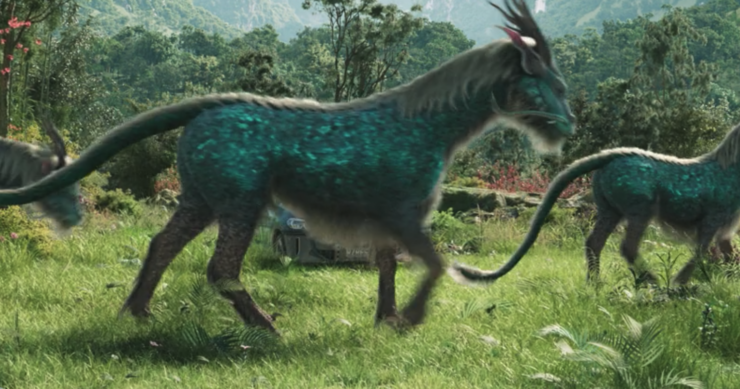 The physical location of the qilin near the entrance to Ta Lo is extremely significant. In Chinese folklore, qilin are said to appear with the imminent arrival or passing of a sage or illustrious ruler. That’s why this creature and its herd are welcoming Shang-Chi and Xialing to their homeland, and the qilin seem to be aware of their bloodline as well as their fated future to defeat the Dweller-in-Darkness. 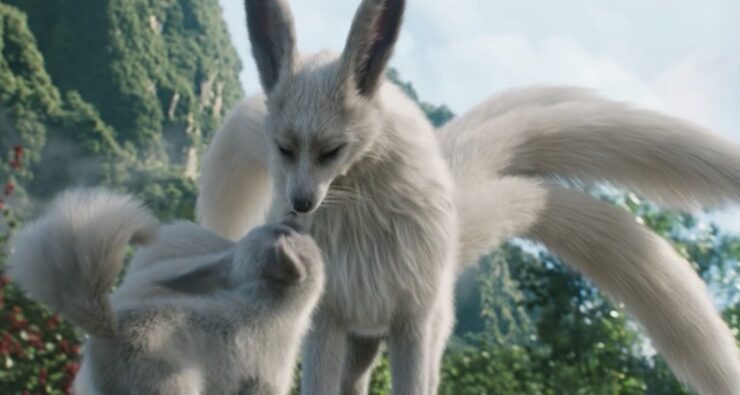 Huli jing — translated in English to “fox spirit” — are shapeshifting creatures known to be either benevolent or malevolent. The most recognizable form is that of the nine-tailed fox. In some legends, the fox can shift into human form, and its presence is both a good omen and a bad omen depending on the story being told.

Fox demons symbolize abundant progeny — thus the large pack of them and inclusion of adorable kits in Shang-Chi. They are associated with sorcery, protection, mischief, and more. Interpretations have changed over time, as many legends do. Based on their fuzzy appearance and serene expressions in the Marvel movie, we can assume the Ta Lo huli jing are a prosperous addition to the mythological menagerie. 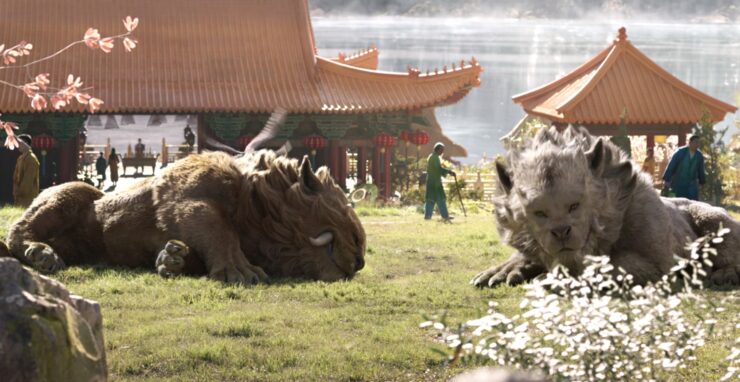 Known colloquially as Fu / Foo Dogs, shishi — literally “stone lions” — are Chinese imperial guardian lions. They protect buildings, often palaces and Buddhist temples, from harmful spiritual influences and threatening outsiders. Often seen in pairs, the warm-toned beasts are seen in Shang-Chi hovering protectively over the citizens of Ta Lo. They provide mythic protections and other spiritual benefits to those close to them. 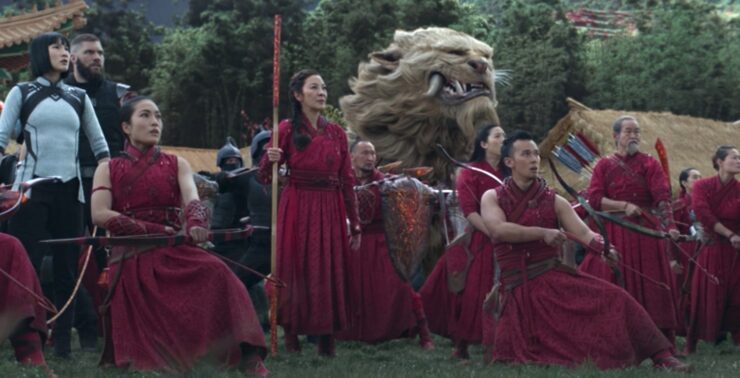 Unlike the other creatures in this article, Fu Dogs are more of a historical Chinese artifact rather than an animal from folklore. They originate in architecture, with one male representing supremacy and one female representing nurturing. In Shang-Chi, all of the lions are depicted with large manes and tusks, with unspecified gender. And they can all easily rip apart the soul-consuming demons that attack Ta Lo.