The Batmobile made its debut appearance in Detective Comics #27 in 1939, where it was first depicted as an ordinary-looking, high-powered automobile cruising through Gotham City, on the road to becoming one of the most iconic fictional vehicles of all time.

Over the years, the caped crusader’s car has evolved into a crime-fighting asset, forging a tire-tracked trail of high-speed chases and super-skilled stunts in numerous Batman iterations.

Varying in style and design, each Batmobile represents a different moment in time. Whether it has a sleek and sculpted body or a robust frame packed with heavy-duty hardware, the appearance of the Dark Knight’s ride has so often reflected the look and feel of the era in which it was produced.

So join us as we head down to the Batcave to take a look back at the various live-action movie versions of the Batmobile through the years. 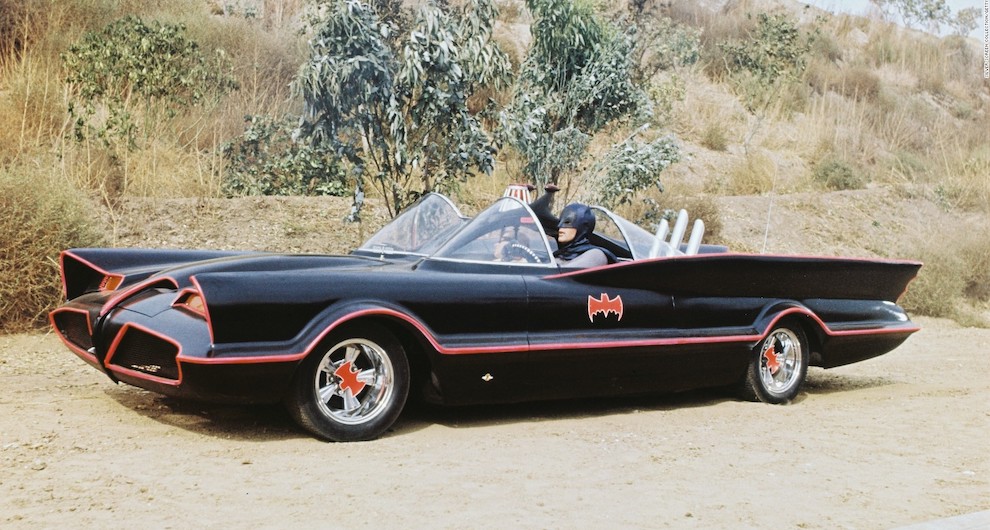 Adam West’s Batman and Burt Ward’s Robin rode around in a manta ray-style vehicle that started life as a 1955 Lincoln Futura concept car before being redesigned by George Barris, a builder of famous custom cars, who hired Bill Cushenberry to work on the automobile’s metal modifications.

The sleek design features a black paint job complete with red accents to highlight the angular trim and the iconic Batman logo that appears on the doors and the wheels. A dome-like windshield, extended tailfins and exaggerated hooded headlights add to its bold aesthetic.

Despite its striking look, the car has a rare combination of style and substance, as it is loaded with lots of neat gadgets. The super-sized Bat-trunk holds a crime-fighting arsenal while the interior is equipped with an emergency Bat-turn lever, infrared Bat-dust, a powerful Bat-zooka, and much more.

All in all, this vintage vehicle stands the test of time; its classic design and specialized functionality gives it a timeless quality that ensures that it would serve its purpose dutifully if the engines were ever throttled up to full power to hit the road once again.

After the Adam West era, the next Batmobile to rev up its engine for a live-action flick was the “Keaton Mobile,” affectionately named after Michael Keaton, the actor who portrayed the titular character in Tim Burton’s Batman and Batman Returns in the late-80s and early-90s.

Keaton’s classic car was built upon the framework of two Chevy Impalas. It was designed by Burton, together with Keith Short, Anton Furst, Terry Ackland-Snow, and John Evans, who turned the vehicle’s blueprint into a gothic masterpiece, with a muted black body and a stretched outer shell.

Seated low to the ground, this stealth-like Batmobile is armed with hook launchers, disc projectile launchers, and bomb dispensers, along with twin M1919 Browning machine guns. Plus, its jet turbine-powered engine and back booster launches it forward at a maximum speed of 530 km/h.

Ultimately, this Batmobile was brought out of the Batcave for a new era, but it had an enduring power that transcended generations. In fact, its influential design has been replicated, reproduced, and revised for a legion of other Batman movie motors. 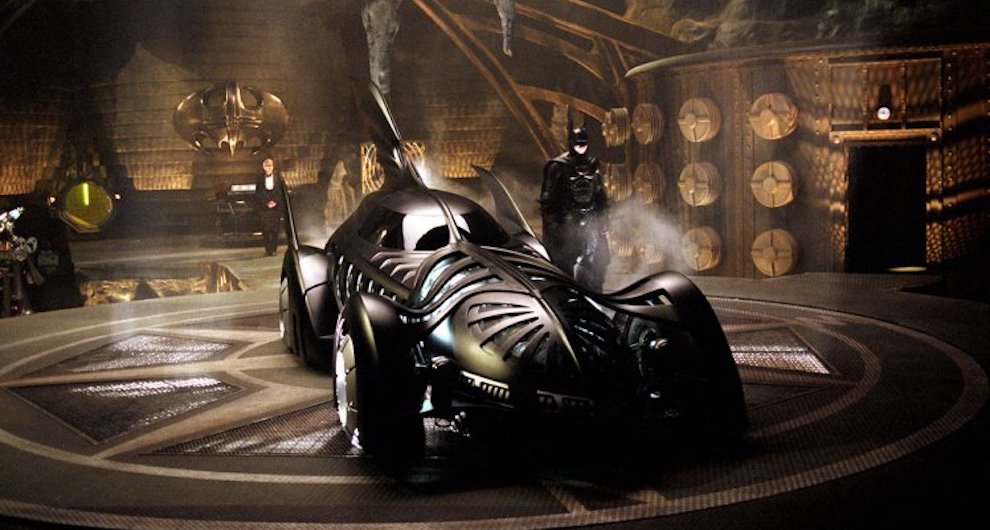 Batman Forever might not have been a critical success, but it spawned a Batmobile that ended up being one of the franchise’s memorable motors. It opts for a Giger-esque biomechanical theme, consistent with the movie, which is a bold deviation from the past designs.

Tim Flattery built the Batmobile out of fiberglass around a Chevy 350 ZZ3 high-performance motor. Its shape is reminiscent of the 1989 vehicle, but it channels a more futuristic style with a rib-cage-like casing, complete with retro tail fins and wings, similar to those of a vampire bat.

As an added bonus, the automobile is every bit as functional as it is stylish. For one, it has a grappling system built into the bonnet, allowing the vehicle to ride vertically up walls. Another cool feature is that the wheels can turn 90-degrees, making it capable of driving forwards and sideways.

While its shape pays homage to earlier cinematic iterations of the Batmobile, it is a monster by its own design. The effect of the decorative lighting, meshed hood, and curved canopy cockpit make it a visionary take on the classic car, driven by Val Kilmer’s Batman in this instance. 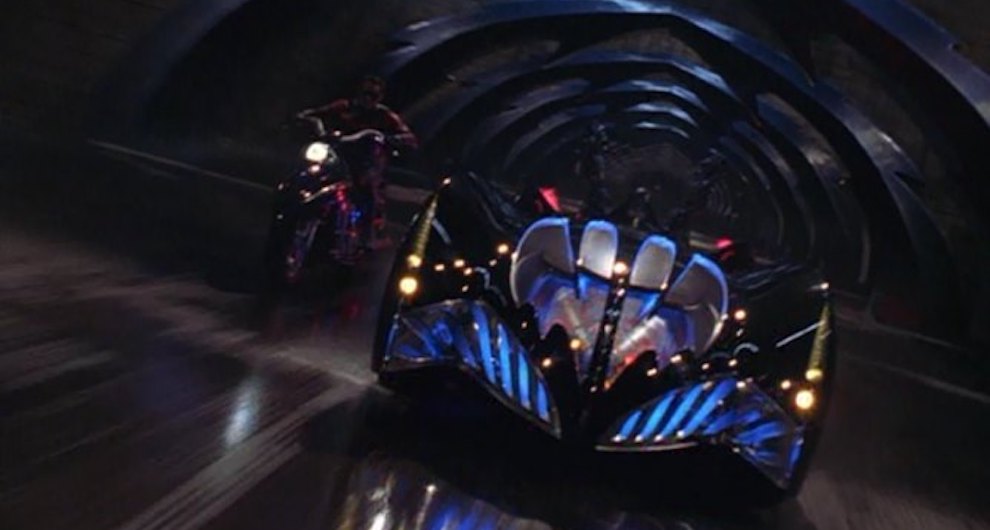 While Batman & Robin is not the most popular chapter in the Bat-franchise, the Batmobile created for George Clooney’s caped crusader deserves a Batarang of credit thrown in its direction for its unique and memorable design, even if it is one of the less practical vehicles.

Designed by Harald Belker, the neo-noir, futuristic car possesses a similar shape to some of the previous live-action Batmobiles with added comic book stylization. While the open cockpit presents an unnecessary risk, the unique “T” axis wheelbase is a redeemable quality, as it tolerates high-velocity turns.

As expected, the gadget count remains high on this car, with its sleek, curved body hiding rocket launchers, grappling hooks, and various bomb dispensers. Additionally, it has an afterburner thrust, making it capable of reaching up to 350 mph on an open road when activated.

To this day, the cartoonish car crusader appears to be a labor of love. Its traditional body design features decorative elements, light-up functions and glowing spinners, which help to dial up the flashy features and make it stand out in the shadows.

When Christopher Nolan rebooted the franchise with the release of Batman Begins in 2005, he also rebooted the Batmobile on a grand scale, as he unleashed an all-terrain, military-inspired edition of the iconic vehicle, inspired by the pages of Frank Miller’s Dark Knight Returns comic book.

Unlike its cinematic predecessors, “the Tumbler” was built to be more like a tank than a car. Designer Nathan Crowley opted for a chunky combat vehicle with a simple black paint job, as he intended to create a muscular workhorse rather than a sleek, stylish cruiser.

Similarly to a military tank, the Tumbler is armed with an impressive arsenal of weaponry and gadgetry. As well as having a pair of machine guns mounted in the nose of the car, it has a bevy of missiles and explosives. Another unique feature is the detachable Batpod that allows the driver to make a swift exit from the main vehicle.

At this point in time, some would argue that the Batmobile needed a serious reinvention to breathe new life into the franchise, and that’s exactly what the Nolan-era automobile managed to do. It was a departure from the earlier iterations of the classic car, but it fulfilled the needs of the vigilante crime-fighter once again. 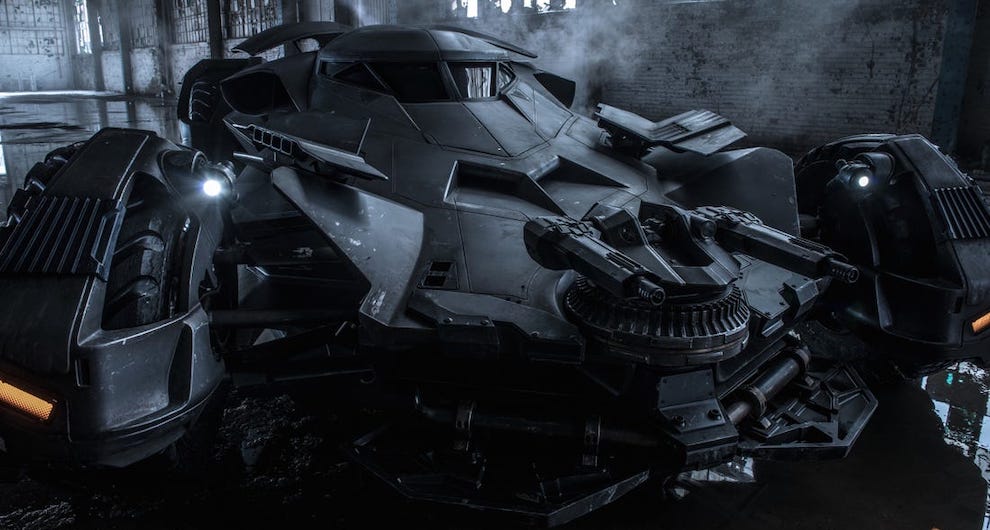 The DCEU Batmobile is an imposing hybrid monster of a vehicle that made its big-screen debut in Batman V Superman: Dawn of Justice in 2016. It then appeared in a flashback scene in Suicide Squad, and later returned for 2017’s Justice League.

The mashed-up auto was designed through the collaborative efforts of director Zack Snyder, along with Patrick Tatopoulos, Kevin Ishioka, Ed Natividad, and Joe Hiura. Together, they stripped away the iconic Bat-elements from the earlier iterations to form a leaner version of the Tumbler.

This Batmobile comes integrated with the latest in covert military grade armaments, making it an all-together tougher predator on the mean streets of Gotham City. The high-spec kit includes a large canon on the hood, a high-powered Gatling gun, and a ballistic missile defense system.

While the DCEU Batmobile ushered in a new era for the Dark Knight, it ended up being a culmination of all the Batmobiles that came before it. The toned-down, sleek shape is a callback to the Burton-Schumacher-era vehicles, while its tactical and militaristic design is closer to Nolan’s tank-esque Tumbler.

Holy hot wheels, Bat-fans! Which Batmobile is your favorite design? Which is your least favorite, and why? Let Your Geek Sideshow and tell us in the comments below!