The Iron Giant rocketed into theaters and straight into our hearts twenty years ago on August 6th, 1999.

The timeless tale tells the story of a young boy named Hogarth Hughes, who discovers and befriends a gigantic alien robot that crash-lands from outer space. Together with his mother and her beatnik buddy, Hogarth makes it his mission to hide and protect the Giant from the government.

The rebellious boy and the misunderstood machine form an unlikely friendship over the course of their madcap adventures together, which are illustrated through the use of traditional animation and computer animation, with each pixel extending far beyond the screen to touch our souls.

During its theatrical release, Brad Bird’s directorial debut was a commercial failure, which was, in part, due to ill-timing and poor promotion, however, it fast became one of the most beloved animated features of all time after attracting a cult following and receiving widespread critical acclaim.

In celebration of The Iron Giant’s unalloyed success we have assembled a selection of little-known facts about the animated sci-fi classic, including details of the titular character’s design, the story’s origins, and film’s technological achievements. So grab yourself a handkerchief and read on to find out Five Fun Facts About the Animated Masterpiece on its 20th anniversary.

5. The Story Is Based on a Ted Hughes Novel 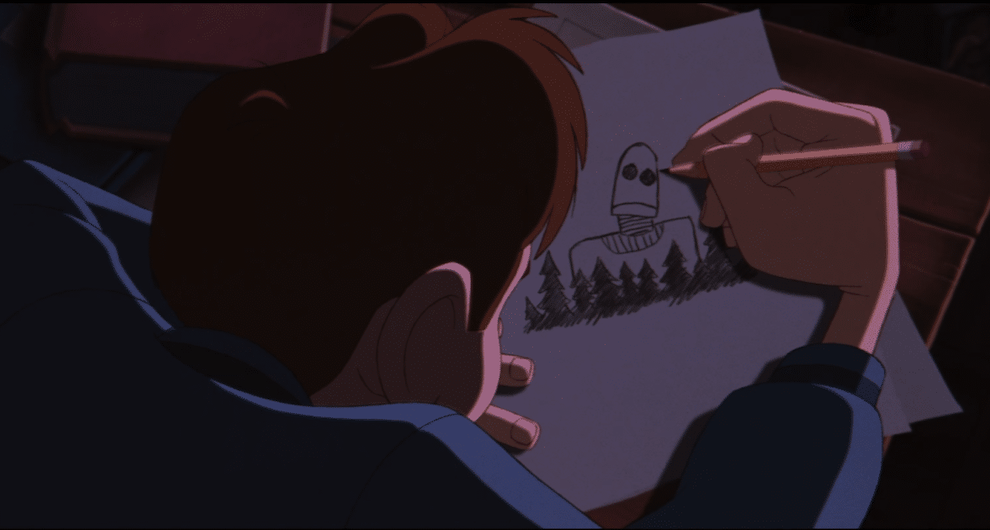 The 1999 animated adventure is based on the novel The Iron Man: A Story in Five Nights written by Ted Hughes (later published in the United States as The Iron Giant). The author penned the children’s book in 1968 as a way of comforting his children after the tragic suicide of their mother, Sylvia Plath.

The film generally tries to remain faithful to the spirit of the source material, only deviating to add a few extra layers to the narrative, which is grounded in the Cold War era of the 1950s. The plot unravels in the United States as opposed to the United Kingdom, the original setting of the novella.

Additionally, two of the main characters, Hogarth and Annie, share the surname Hughes with the author of the science fiction story, though sadly, Ted Hughes passed away in 1998, just one year before The Iron Giant landed in theaters.

4. The Original Script Had Much Darker Themes 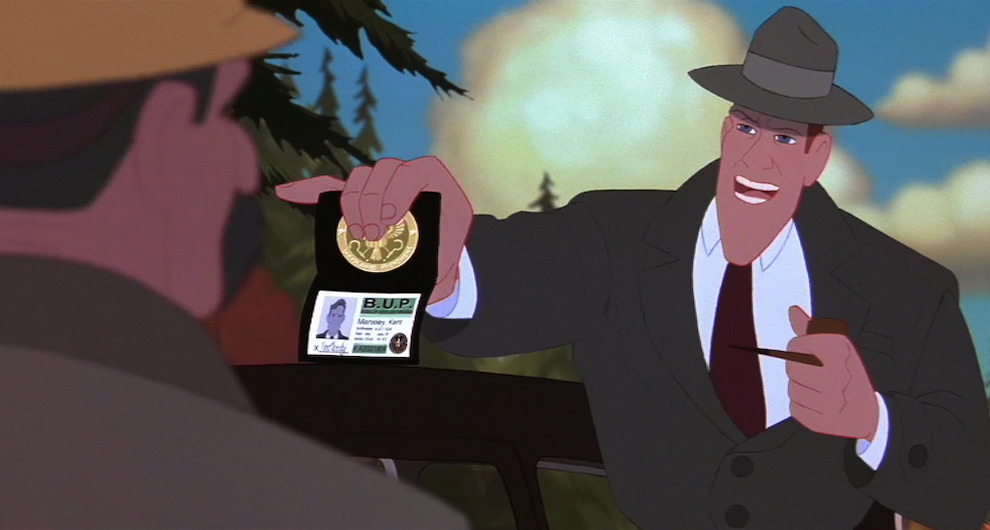 The first drafts of the film’s script were said to have a darker tone than the one that finally went to production. The geopolitical tensions between the Soviet Union and the United States featured more prominently in the original screenplay, with one of the major themes being the threat of nuclear warfare.

While the film preserved some of the political overtones of the Cold War and the space race, Brad Bird decided to lighten up the script, bringing forward the themes of human nature, peace, and friendship to appeal to the younger audience that the animated feature was intended for.

Hughes, who read the script before it went to screen, expressed his approval of this version in a letter to Warner Bros. saying, “I want to tell you how much I like what Brad Bird has done… He’s made a terrific dramatic situation out of the way he’s developed The Iron Giant. I can’t stop thinking about it.” 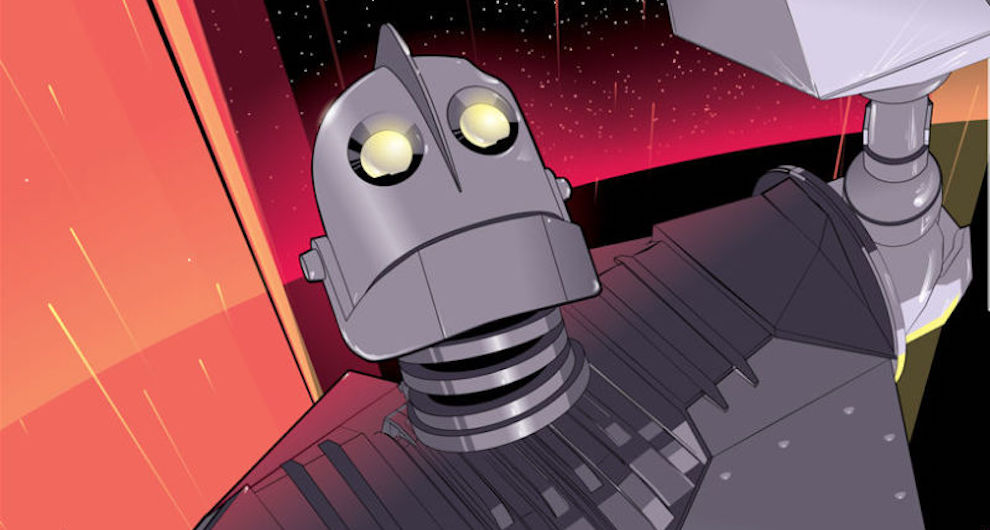 American film director Joe Johnston provided the original sketches and designs for the Iron Giant, who became iconic for his towering mechanical structure and waxed silver metal color. Johnston reportedly drew his inspiration for the character’s appearance from the sci-fi classic The Day the Earth Stood Still.

Johnston started his career as a concept artist and effects technician on the first Star Wars film, and served as art director on one of the sequels. He continued as an effects expert on a plethora of other films, including Indiana Jones and the Raiders of the Lost Ark.

With an eye for visuals, Johnston moved behind the camera, making his directorial debut with hit comedy adventure Honey, I Shrunk the Kids in 1989, however, he continued to moonlight in the art department and ended up being drafted in to create the initial designs for the Giant.

2. The Title Character Made an Animation Breakthrough 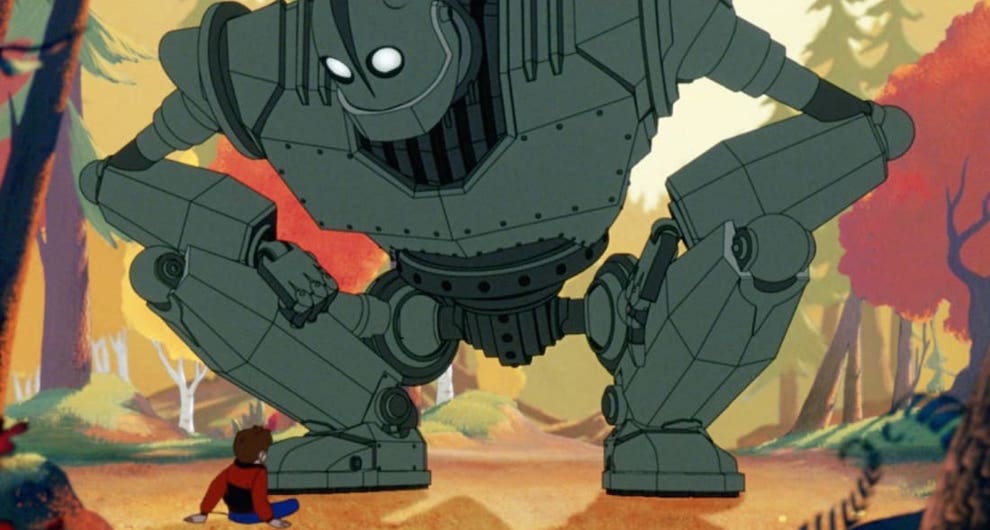 The film was apparently the first 2D animated feature to include a computer-generated character. The two types of animation were seamlessly blended together after animators flagged concerns over hand-drawing a solid, metallic character.

“It is difficult for a human to draw a big, solid metallic object. Animators excel at drawing movement and living, fluid objects,” Brad Bird explained in an archived Warner Bros. production feature.

Since the giant originates from a different world, the creative team believed that using a different style of animation for his character would help to give the impression that the robot is from a different place, better establishing the fish-out-of-water facet of the story.

While they were happy for the title character to adopt a different look to the other characters, technicians ensured that the Giant didn’t appear too lifeless by developing a computer program that would give his lines a slight wobble to produce the natural imperfections of a hand-drawn animation.

1. The Fictional Location Was Inspired by Norman Rockwell 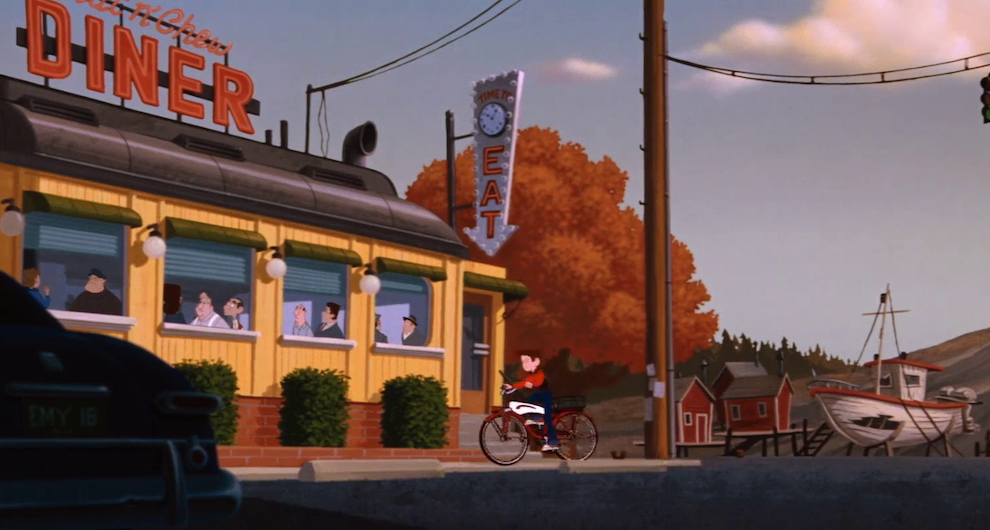 As previously mentioned, The Iron Man novel was given a British setting, whereas the film adaptation was set in the fictional city of Rockwell in Maine. The phony town was given a name that was suspiciously similar to that of Roswell, New Mexico, where aliens allegedly crash-landed in 1947.

However, it was also said that the name Rockwell derived from the author and painter Norman Rockwell, who was well known for his idealized vision of rural American life, as the story was placed in a small town slightly out of touch with modern civilization and technological advancements.

The creative team were apparently inspired by the artwork of Edward Hopper, N.C. Wyeth, and Rockwell, who Brad Bird recognized as one of the main influences for the design of the city, which presented a wholesome backdrop to the picture.

Have you watched The Iron Giant? Did any of these facts about the animated masterpiece surprise you? Let Your Geek Sideshow and tell us in the comments.