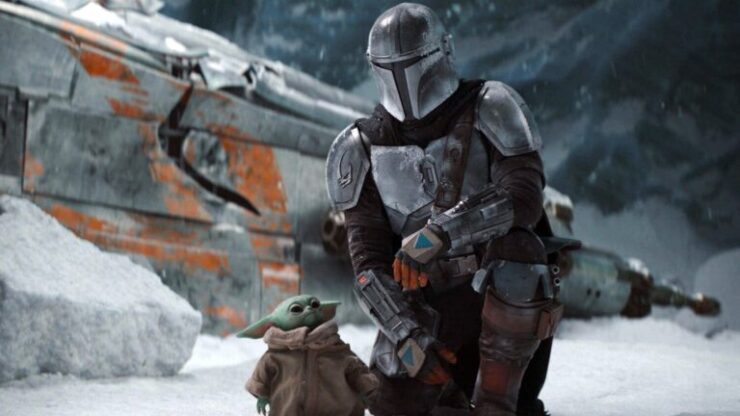 Spoiler Alert for The Mandalorian™ Season 2 Recaps Below!

What may have started out as an homage to Boba Fett and the intrigue of Star Wars bounty hunters has become a saga all its own- The Mandalorian™ on Disney+.

Though Mando looks like Fett, he couldn’t be more different. He’s righteous, wise, and an even better fighter than the bounty hunter we grew up with. Boba just wore the armor – but Mando is the real deal.

Because of him, stellar writing, and the Child (dubbed “Baby Yoda” by the fanbase), the show has truly reached legendary status. Season 2 is now upon us, and our only complaint is that we wish we could binge all the episodes at once.

But good things come to those who wait a week. Let’s recap on what’s happened so far: 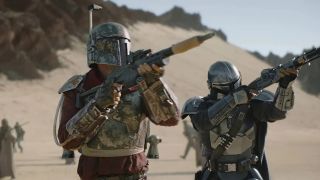 Season 2 starts with a bang. Guest star John Leguizamo plays an alien gangster at a Gammorean axe match named Gor Koresh. Din Djarin, in search of both the Jedi and other Mandalorians, asks him for information. But like many other characters, Koresh really wants Mando’s armor. This leads to a no holds barred brawl within the first five minutes of the episode. Using his Whistling Bird missiles and incredible combat moves, Mando defeats the villain and his cronies with ease.

Strung up on a pole, Koresh tells Mando that another Mandalorian can be found in the village of Mos Pelgo on Tatooine. In exchange, Mando promises not to kill Koresh. But Mando does shoot out the light on the pole, and the darkness attracts hungry, red-eyed monsters. Yes, that seriously happened. Mando let Koresh suffer a horrifying (and karmic) death. You don’t just threaten a Mandalorian.

Mando and the Child then travel to Tatooine, where they meet an interesting character from canon novels. He’s not another Mandalorian, but he wears the armor of Boba Fett. Known for films like Hitman and The Crazies, Timothy Olyphant portrays Cobb Vanth, village marshal. Apparently, he got Fett’s armor from some Jawas, which makes us really wonder how they got it in the first place. Did the Sarlacc spit it out, or did they kill it?

Not being a real Mandalorian, Vanth rubs Mando the wrong way. They ready themselves for a western showdown, but are interrupted by an earthquake. The cause is a Krayt Dragon, a monster hinted at in the past but never seen until now. The beast periodically terrorizes the region, and no one can figure out how to stop it.

Unlikely team-ups are common in this series. Vanth and Mando join forces, enlisting the help of villagers and even some Tusken Raiders. They hatch an elaborate plan to draw the creature out and eliminate it. What follows is an action scene for the ages. In the end, Mando is actually swallowed by the beast. But he escapes before triggering an explosion that ends the Dragon once and for all

Many fighters were killed in the process, but peace has finally arrived for this part of Tatooine. The Tusken Raiders, typically known and misunderstood for being savage, actually did something good for once, and they agree to stay on good terms with the villagers.

Mando gets the Boba Fett armor and later leaves Mos Pelgo. But someone is watching them – a mysterious scarred figure portrayed by Temuera Morrison, better known as Jango Fett and the clones in the prequel films. 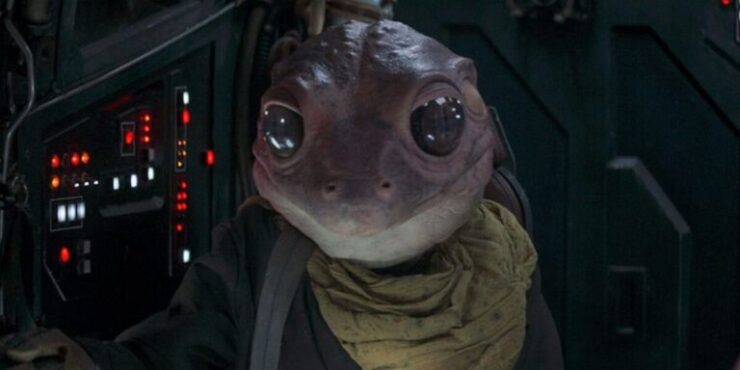 Featuring some of the most creature-heavy action so far (maybe even more than the last episode), THE PASSENGER sees Mando continuing his trek to find others of his kind.

Still on Tatooine, mechanic and friend Peli Motto introduces Mando to a woman who wants passage on the Razor Crest. They must travel to Trask to see her husband, who will tell Mando how to find other Mandalorians.

Mando’s passenger is one of the most unique and over-the-top characters we’ve seen in the series – the Frog Lady. She’s exactly what her name suggests: a sentient, egg-carrying amphibian who speaks her own frog language. The idea of a frog woman might seem bizarre and outlandish to some, but The Mandalorian makes it work. Star Wars was founded on strangeness, and a random frog is par for the course. She actually ends up being funny, realistic, and amazing.

Together they head into space. Going into hyperdrive is out of the question, as it would hurt Frog Lady’s eggs. But there’s another danger to the eggs on-board – a very naughty Child. Apparently hungry, he eats a few of the Frog Lady’s eggs. This seems like infanticide, but the eggs actually weren’t yet fertilized. Still, the act is a bit disturbing, as he probably would have eaten them even if they did carry babies. But the Child is so darn cute – the innocent 50-year old infant didn’t know it was wrong.

Still an outlaw, Mando is forced to flee when a pair of X-Wings converge on the Razor Crest. With their ship heavily damaged, Mando and company are then trapped on an ice planet. Mando wants to wait until it gets warmer to start repairs, but Frog Lady hooks herself up to the Q9-0 droid from Season 1’s THE PRISONER. She uses the droid as a translator, convincing Mando to start repairs sooner.

This is where the real fun begins. As Frog Lady bathes in a pool, the Child explores. He happens upon a group of not-very-nice valley residents. The Mandalorian is forced to fight off a massive army of spider creatures in a visual effects extravaganza. They even have a queen – a very large one. Frog Lady just wanted a bath, and now she’s running from a horde of hungry predators.

The monsters are creepy, well-designed, and fun to watch. It looks hopeless for the three humanoids until the X-Wings finally find them. The pilots shoot down all the spiders. They let Mando’s arrest warrant slide, citing the fact that he defended a prison guard and locked up a few criminals (THE PRISONER).

Mando then completes enough repairs for them to leave, but the Razor Crest is still on its last legs.

THE HEIRESS was directed by Bryce Dallas Howard. Much like her father, she’s a very good director particularly skilled with action and comedy scenes (She also previously directed Chapter 4: SANCTUARY for the series). Therefore, this episode is a wild ride.

His ship still in need of repairs, Mando continues his journey with Frog Lady and the Child. The Razor Crest’s landing gear is inoperable, so they’re in for a bumpy landing. After crashing into the water, they’re fished out by a more familiar amphibian race, the Mon Calamari. As Mando pays them to fix his ship, the Frog Woman is reunited with her husband. He tells Mando that someone at an inn has recently seen some  Mandalorians.

A Mon Calamari connects Mando with a Quarren captain who says he can lead him to the warriors he seeks.

The Quarren grants him passage on an ocean ship. In a show that works as a sci-fi, a western, and a fantasy, almost anything can be expected. In this sequence, we’ve officially entered pirate territory. Ultimately, that’s what the Quarren on this ship turn out to be, and they double-cross Mando (naturally) and throw the Child into the mouth of their Mamacore creature. The pirates want to kill Mando and steal his Beskar armor, so they shove him into the Mamacore’s compartment.

Close to drowning, he’s rescued by a trio of Mandalorians: Koska Reeves; Axe Woves; and Bo-Katan Kryze, sister of Duchess Satine and all-around badass from the CLONE WARS TV series. Portrayed her original voice actress Katee Sackhoff, Kryze is a welcome sight to fans, an organic transition from animation to live-action (this bodes well for any other characters from the past we might see).

Though they rescue the Child, Mando doesn’t trust the three warriors. Removing their helmets, they clearly don’t follow “The Way”, which they claim is only a small orthodox branch of the larger Mandalorian culture. Kryze calls Mando a Child of the Watch, calling the covert who raised him a cult.

Later, they save Mando from another group of Quarren, so he reluctantly decides to learn more about them. Kryze says that if he helps them retrieve weapons from an Imperial freighter, she will tell him where to find a Jedi.

Leaving the Child with Frog Lady, Mando helps Kryze capture the freighter. When the situation is clearly hopeless, the captain tries to crash the ship. The Mandalorians make it to the bridge and stop the ship before it hits the water. Kryze tells the captain to reveal where the Darksaber is – though he kills himself, he essentially confirms that it’s in the possession of his boss, Moff Gideon.

Thanking Mando for his bravery, Kryze tells him where to find a former Jedi known as Ahsoka Tano.

Do you like The Mandalorian™ Season 2 so far? Sound off in the comments, and don’t forget to Let Your Geek Sideshow.