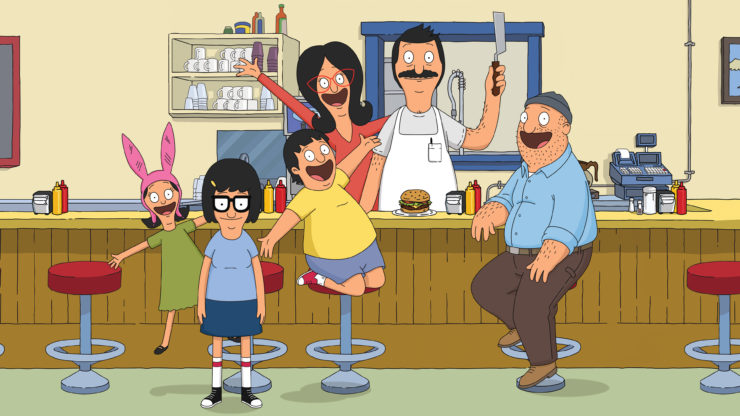 This week, we are hitting the grill to serve up a list of the Top 10 Fictional Burger Restaurants. These pop culture hangouts for hungry characters have the secret ingredients needed to make our mouths water, wishing they could be real franchises. Their mascots and mottos are iconic across fandom, branching from films to television to comics.

So hold the pickles and grab some napkins as we count down the best burgers in the biz and see if your favorite food venues made the cut. Order up!

From Buffy the Vampire Slayer, the Doublemeat Palace is the duplicitous burger restaurant where Buffy Summers must work to pay off debt. The restaurant claims to offer burgers that are a mixture of beef and chicken, but when Buffy asks about the secret ingredient, she’s told it’s just a “meat process”. The meat mystery continues as her coworkers stop coming to work, and Buffy becomes convinced that the secret ingredient is actually humans.

Ultimately, it’s revealed the employees are being attacked by a monster attracted by the burger smell, completely unrelated to the true secret of the burgers- that the “meat” is actually cellulose (vegetable product treated with beef fat). This episode actually caused controversy with series sponsors who disliked the portrayal of the fast food industry. The employee uniform for the Doublemeat Palace features a cap with cow’s head on the front and rooster feathers on the back.

Paunch Burger is the local fast food juggernaut in Pawnee, Indiana in the Parks and Rec television series. Like many of the other foods and franchises in this series, it is known for being extremely unhealthy in every respect. They eventually team with councilman Jeremy Jamm to try to overtake the Sullivan Street Pit for a new location, while Leslie Knope fights for more public works spaces.

Paunch Burger offers a number of frighteningly overwhelming food options, including their “child size” soft drink, which is the size of a small child, as well as their best-selling burger, the Greasy Lard Bomb. Their motto is, “It tastes amazing. What’s in it? Who cares!”

Mooby’s is a restaurant in Kevin Smith’s View Askewniverse, featured most notably in Dogma, Jay and Silent Bob Strike Back, and Clerks II. The mascot Mooby the Golden Calf is a fictional television character who parodies elements of characters like Mickey Mouse and Barney the Dinosaur.

Mooby’s features somewhat morbid playground equipment in the shape of a meat grinder, and the restaurant’s slogan is, “I’m eating it,” as a reference to the McDonald’s “I’m lovin’ it,” motto. The restaurant also offers Moobynet, seen when Jay uses it to view internet message boards in Jay and Silent Bob Strike Back.

The Peach Pit is a retro-styled diner that served as the mainstay hangout for the locals of Beverly Hills, 90210. A pop-up replica of the Peach Pit opened this past summer for a limited time engagement, and within the context of the series it was inspired by the actual Beverly Hills staple, The Apple Pan.

The Peach Pit is owned by Nat Bussichio, and has been a popular meeting place, a broadcast location, and has employed many of the characters in the series. It serves traditional American diner food like burgers, fries, salads, and milkshakes, and is home to the megaburger.

The Max was the regular café hangout for the students of Saved by the Bell, the popular late 80s to early 90s sitcom. Its décor was bright and quintessentially 90s, with neon lights and classic diner-style tabletops. The students of Bayside High, especially the Bayside Tigers sports teams, would celebrate before and after games.

Owned by a magician named Max, the restaurant featured heavily throughout the series, and was burned down and then rebuilt and renovated in the Saved By the Bell: The New Class spin-off series. It was technically a fully functional restaurant, despite only existing on a sound stage and serving food only to cast, crew, and extras. The LA County Health Department gave it a “D” rating. It was later brought to life as an actual public restaurant during a Saved by the Max Pop-Up event.

Big Belly Burger is a fictional fast food chain in the DC Universe, serving a number of heroes including The Flash. It first appeared in the Adventures of Superman comic series, but has since appeared in the CW Arrowverse, but has appeared in more Superman comics than in any other series. It was created by writer John Byrne, and the restaurant was founded in Coast City, the home of Hal Jordan.

Big Belly Burger’s signature menu includes the Belly Buster, the Belly Flop, and the Cheesemeister Deluxe. The restaurant’s mascot was modeled after writer and editor Andy Helfer, and is also a parody on Bob’s Big Boy, a real world fast food chain. In The Flash television series, Barry Allen can be seen scarfing down BBB food to recover his expended calories after superspeed outings.

Welcome to the Good Burger, home of the Good Burger- can I take your order? The origins of Good Burger come from a classic sketch on the variety show All That on Nickelodeon, but it spawned into a motion picture and a soundtrack. The recurring sketch featured Kel Mitchell as Ed, the hapless cashier who was often messing things up in the restaurant.

The Good Burger movie, released in 1997, introduced Kenan Thompson as Dexter, a fellow cashier. One notable staple of the Good Burger introduced in the film was the secret “orange sauce”. If customers found something wrong with their order, one of Ed’s notable catchphrases was, “Uh, no.” Good Burger was also brought to life in a pop-up by the same team behind the Saved by the Max event.

Founded by Krusty the Clown in Springfield, USA, the Krusty Burger is the fast-food chain from The Simpsons. Krusty himself is often disgusted by the food served here, but it’s a Springfield staple, serving many characters throughout the town. It even helped in a pinch when Principal Seymour Skinner burned a roast in the oven and needed some “steamed hams” in a pinch.

Krusty Burger has paid off the Springfield mafia to keep out other burger joints, and has a mascot known as the Krusty Burglar. Despite selling food of dubious origins, most of the people of Springfield don’t care enough to argue. Their menu has included the Meat-Flavored Sandwich, the Clogger, the Double Krusty Burger, and the limited-time Ribwich.

Offering a unique Burger of the Day special with an accompanying pun name, Bob’s Burgers is a hidden gem for visitors to the Wonder Wharf, owned by Bob and Linda Belcher.

Located across from Jimmy Pesto’s Pizzeria, Bob’s Burgers is often harangued by a number of inconveniences, including obnoxious rivals, petty health inspectors, suspicions of human meat, and the general antics of Tina, Louise, and Gene Belcher. The restaurant is a family operation and has even featured a mischievous mascot called Beefsquatch as Bob and the rest of the Belchers try to drum up business in their little beachfront town.

[Today’s Burger of the Day is the Lettuce Your Geek Side Show burger, wrapped in lettuce in place of a bun.]

The secret formula for Krabby Patties has long been sought after by competitors, though it is a closely guarded secret of the Krusty Krab. This is the fictional restaurant in the world of Spongebob Squarepants, with only two full time employees- Spongebob the fry cook and Squidward the cashier. The town of Bikini Bottom regards it as the “finest eating establishment ever established for eating,” as opposed to its competitor the Chum Bucket.

The Krusty Krab has tried to rebrand itself several times, usually disguising itself as a finer dining experience, but the citizens of Bikini Bottom come here for the quick, delicious food. The Krabby Patty is specifically layered- two buns with patty, lettuce, cheese, onions, tomatoes, ketchup, mustard, and pickles in that order. That’s a lot of hooplah for our #2 burger choice!

The Hawaiian-themed chain has also appeared in Death Proof, Four Rooms, and Reservoir Dogs, as well Robert Rodriguez’s From Dusk Till Dawn and the accompanying tv series. Since being used in Tarantino’s films, many real-world restaurants reference the burger’s name on their own menus, and popular food blogger Binging with Babish recreated the burger in an instructional video on YouTube. Now that’s a tasty burger.

So, did we serve up a satisfying list? Or was this one underdone? If we missed something that you think should be on the list, Let Your Geek Sideshow and tell us in the comments below!