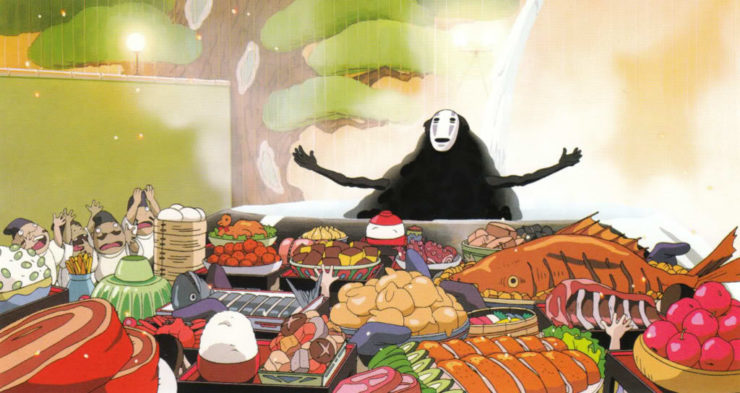 This week, we’re ready to serve up a piping hot list of the Top 10 Fictional Foods. While some of these cinematic snacks have turned into real-world confections, the sad reality is that we will never know quite how these magical, mysterious, and otherwise mouthwatering dishes taste. (Though for a few of the sci-fi delicacies included, we might be better off just imagining.)

Hope you brought your appetite to find out which tasty treats topped our list this week. Let’s get started!

Anyone who has ever seen a Studio Ghibli film knows how much love and attention is put into any scene involving food. From the sumptuous breakfast a la Calcifer in Howl’s Moving Castle to pigging out- literally- at a market stall in Spirited Away, food itself in Studio Ghibli films is as iconic as some of the beloved characters.

Kiki’s Delivery Service has an entire bakery full of food! Many of these dishes are real-world foods, but the fantasy of cooking and serving these immaculate dishes remains etched in the minds of countless fans, earning our Honorable Mention.

In the Steve Martin comedy film The Jerk, one particularly strange food item has stood out in pop culture as a, “Why hasn’t someone done this yet?” type of venture. According to Navin, Martin’s character, people come from all over to get this pizza in a cup.

While the audience isn’t really shown what the Cup O’Pizza looks like, décor from the former establishment decorates Navin’s trailer, and the dish stands out as both intriguing and possibly disgusting at the same time. Move over, Cup O’Noodles!

9) The Witch’s Turkish Delight- The Lion, The Witch, and the Wardrobe

While Turkish Delight is a real world confection, the version served up by the White Witch in C.S. Lewis’s The Lion, The Witch, and The Wardrobe is magically enchanted to be tastier than anything else in the world, so much so that Edmund Pevensie sells out his whole family just for another taste.

The witch asks the boy what he would like to eat more than anything else, and then conjures up the candy, which is traditionally made of starch and sugar. The magical sweet was severely addictive, and eventually made Edmund feel sick from eating too much. 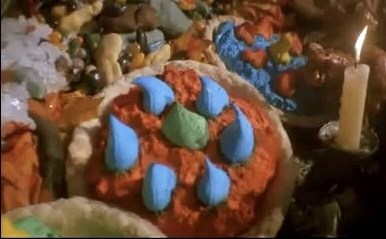 While the imaginary feast in Hook features various breads, vegetables, and meats, most fans remember the vividly colored whipped cream pies that led to an epic food fight.

After the Lost Boys encourage an adult Peter Pan to use his imagination, the feast miraculously comes to life before his eyes, and then the rainbow foam starts flying. Bangarang!

In a dystopian future where only the elite can afford natural food, Soylent Industries paves the way with their artificial wafers, Soylent Green, Red, and Yellow. Soylent Green is by far the most flavorful and nutritious of the three wafer options- originally it is said that the protein in the wafer comes from ocean plankton, but the oceans no longer sustain plankton in their ecosystem.

Though their name is a combination of ‘soy’ and ‘lentil’, fans familiar with the film’s plot twist may know it’s true dark secret- spoiler alert, Soylent Green is people, whose recycled corpses provide protein to the starving, overcrowded masses.

Scooby Snacks are the fictional biscuit treat from Hanna Barbera’s Scooby-Doo. They are often used as a bribe to get Scooby and Shaggy to brave the frightening situations that Mystery Inc. often encounters.

William Hanna always imagined they tasted like caramel-flavored cookies, but in one Scooby-Doo film, Shaggy states that the recipe is eggs, water, flour, cocoa, sugar, and dog kibble. Since being featured on the show, there have been licensed Scooby Snacks, both as human food and dog treats.

5) Lembas- Lord of the Rings

Also known as Elven bread or waybread, Lembas is a nutritious and filling bread that was made by the elves specifically for travel. Usually served wrapped in mallorn leaves, lembas is sweet, crisp, and wafer-like.

Its recipe is closely guarded by the elves, and the bread is said to be able to fill the stomach of a grown man with a single bite. Of course, that is to say nothing about how much a Hobbit could eat.

From the Star Trek universe, Gagh is a Klingon delicacy, made from serpent worms and served in a variety of preparations. It is most popularly served live, and there are at least 51 different species of gagh, each with unique flavor, texture, and features, including Bithool gagh with feet, Wistan gagh packed in targ blood, and Meshta gagh, which jumped.

The delicacy is known well beyond the Klingon empire, and only few humans actually enjoy it- including Jean-Luc Picard and William T. Riker.

Designed for children with very little pocket money, Willy Wonka’s Everlasting Gobstopper promises never to get smaller and to never disappear. Apart from that, it looks and tastes like an average jawbreaker, changing colors and flavors as it is consumed.

According to the novel, an Everlasting Gobstopper changes colors about once a week, and it will certainly break your teeth if you try to chew it. This magical, mysterious candy has since been turned into a real-world treat that won’t last you nearly as long, unfortunately.

One of the most popular candies in the Wizarding World, Bertie Bott’s Every Flavour Beans look like muggle jelly beans, but magically encompass every flavor imaginable- from traditional treats like peppermint, chocolate, and cherry, as well as disgusting non-foods like paper, earwax, and dirt.

The beans are sold to students on the Hogwarts Trolley as well as at Honeydukes in Hogsmeade, and they are considered, “a risk with every mouthful!” They have since been made into real sweets, and yes, the disgusting flavors exist too.

In Seussian fashion, the dish is slightly odd but otherwise edible and almost normal, if it weren’t for the coloration of the eggs and ham. The dish is offered by Sam-I-Am to a naysayer named Guy-Am-I, who insists that he doesn’t like the food. In the end, though, Guy-Am-I tries the Green Eggs and Ham, deciding that he likes them after all.

So, did these fictional foods make a satisfying feast? Or should we go back for seconds and try again? If we missed something that you think should be on the list, Let Your Geek Sideshow and tell us in the comments!