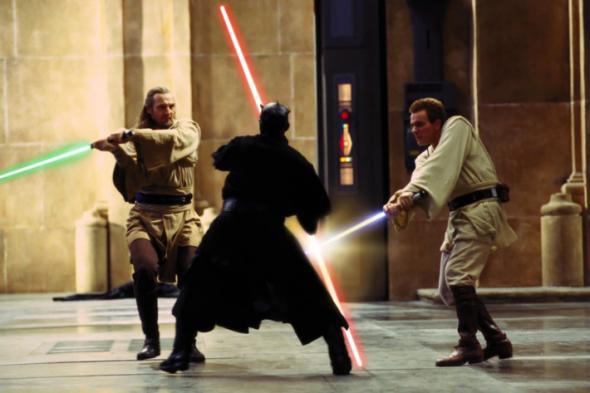 This week, we’ve searched our feelings and ranked the Top 10 Lightsaber Battles in Star Wars. Most Star Wars fans have dreamed of what it would be like to wield a lightsaber in our hands, and these battles represent the best of the bunch- epic fight choreography, the highest stakes, and the biggest names in the galaxy fighting to prove they are strong in the Force.

Vwoom, vwoom- fire up those sabers and let’s get swinging!

10) Obi-Wan Kenobi vs. General Grievous (Revenge of the Sith)

This lightsaber battle showcased the true epic design of General Grievous, the cyborg Jedi-Killer with multiple arms and a trophy saber in each hand. Encountering Grievous on the Separatist hideout planet Utapau (hello there!) General Kenobi engages the cyborg in a battle that visually dazzles the audience until it gets a little silly in the second phase, wherein the duelists mount vehicles and engage in a chase.

General Grievous’s unique physiology and stolen lightsabers make this one of the more memorable Star Wars battles, especially considering how the cyborg interacted with his weapons. Paired with Ewan McGregor as the ever-interesting Kenobi, this battle is a solid entry into the saga.

This battle, though definitively the shortest duel, left quite an impact on viewers when these fated archenemies settled their score for good in Star Wars: Rebels. It was Darth Maul’s decisive ending since being given a deep and rich story throughout the Clone Wars and Rebels, finally facing off against an older Obi-Wan on Tatooine.

The scene is tense, but the battle is ended in three strokes, as Obi-Wan predicts Maul’s attack (the same that killed the former’s Jedi Master Qui-Gon Jinn in The Phantom Menace) and defends himself against the blow. Darth Maul is defeated, dying in the arms of his most enduring foe.

Once more from the Star Wars: Rebels animated series, this battle on the planet Malacor initially begins as a mismatched battle between Ezra Bridger and Darth Vader himself. Soon, the Sith Lord is challenged by his former padawan, Ahsoka Tano, wielding her signature dual blades.

By this point, Ahsoka has long since left the Jedi Order, and she and Darth Vader (or Anakin Skywalker) have not seen each other in a very long time. Still, they recognize one another, giving the battle an emotional charge. Coupled with the fluidity of the animation as Vader’s one blade combats Ahsoka’s dual sabers, this battle is a beautifully choreographed and emotional bout.

7) Mace Windu vs. Darth Sidious (Revenge of the Sith)

This battle on Coruscant is an important turning point for the galaxy as a whole, as the battle between Mace Windu and Darth Sidious exposes Sheev Palpatine for who he truly is. By this point, Anakin has already become Palpatine’s apprentice, unbeknownst to the Jedi Master who engages “the Senate” himself in battle.

The excessive use of Force Lightning in this battle proves to be Sheev’s downfall, if only temporarily, as Windu reflects the blast and deforms the politician into the more familiar form of the wrinkled, terrifying Emperor. This battle was also high-stakes in the fact that Anakin finally affirms his Sith allegiance as he finishes the battle for his master, killing Mace Windu and beginning his final steps to become Darth Vader.

6) Rey and Kylo Ren vs. the Praetorian Guard (The Last Jedi) 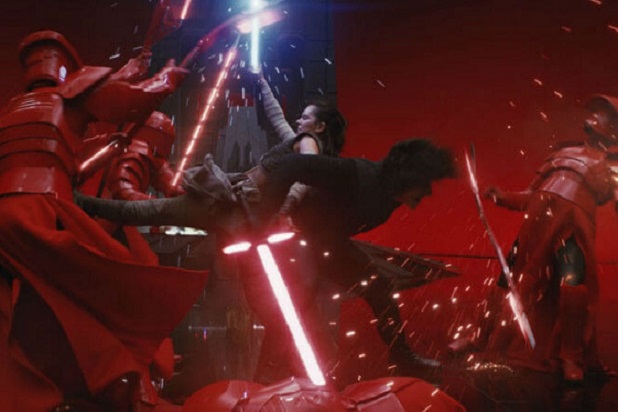 In the only entry of the sequel trilogy on this list, this beautifully choreographed and color-coordinated battle showcases the power of the two foremost fighters in the Star Wars galaxy at this point- Rey and Kylo Ren. After the death of Supreme Leader Snoke, the fated duelists must take down the elite Praetorian Guard, working in tandem to escape.

This battle is elegant, featuring some of the more unique battle techniques of the Skywalker Saga as Rey and Kylo put their differences aside to work together, although they ultimately have different goals in mind. They battle alongside one another hoping to turn the other to their purpose- Resistance or Ruling the Galaxy.

5) Yoda vs. Darth Sidious (Revenge of the Sith)

Set on Coruscant right after the battle with Mace Windu, Jedi Master Yoda must face off with the newly exposed Darth Sidious in one of the biggest “set piece” battles of the Star Wars series so far. This is one of the best instances of Yoda in his prime, just before his self-exile for failure. He is spry and masterful in his battling, matched only by the supreme power of the dangerous Sith.

Known also as “The Skirmish in the Senate,” this battle takes place around the time at which Anakin Skywalker is having his own fated battle with former friend and master Obi-Wan Kenobi. Once Darth Sidious emerges victorious from yet another fight, he quickly departs to go retrieve his severely injured apprentice.

4) Obi-Wan Kenobi vs. Anakin Skywalker on Mustafar (Revenge of the Sith)

The confrontation between Anakin Skywalker and Obi-Wan Kenobi is one of the most emotionally charged battles in all of Star Wars. This is a battle friends, a former padawan and master who thought they could trust one another. Corrupted by Darth Sidious, Anakin is motivated by his fear of losing Padme and clouded by his anger, leading to this doggedly exhausting battle for both fighters.

Obi-Wan’s impassioned cries for Anakin to renounce the dark side are ignored over the deafening sound of lava, panning droids, and the former padawan’s screams of rage. This is the final fateful moment in Anakin’s total turn, leading to his transformation into the terrifying Darth Vader. (Plus, this battle may in fact have the highest count of limbs claimed by battle in a franchise rife with hands and legs being cut off by lightsabers.)

3) Luke Skywalker vs. Darth Vader on the Death Star (Return of the Jedi)

In Return of the Jedi, Luke Skywalker has become a proper Jedi Knight, confronted by Vader and the Emperor in a bid to turn him to the dark side. Here, on the second Death Star, Luke fights to save his father more than he does to win by sheer force. He denounces the Emperor and shows what he has learned from Master Yoda, but not without nearly giving in to anger. Luke manages to maintain control over his emotions, however, and does not let himself give in to hate.

Ultimately, he is able to redeem his father in a memorable fight that was equal parts tense, emotional, and incredibly high-stakes.

2) Luke Skywalker vs. Darth Vader on Bespin (The Empire Strikes Back) 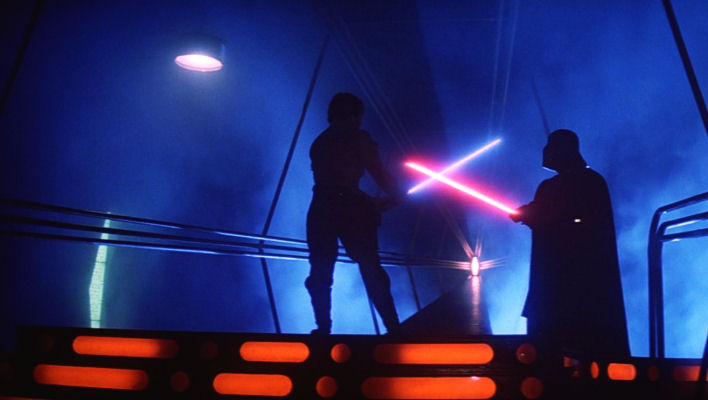 One of the most iconic scenes in the whole franchise, Luke encountering Darth Vader on Bespin in an effort to save his friends leads to this incredible battle that is remembered more for its revelations than its actual action. In the inner workings of Cloud City, Vader engages the novice Luke in a one-handed sword-fighting style before the battle becomes more engaged, incorporating the actual scenery as Vader throws parts of the city at his long-lost son.

Remembered for the lighting, atmosphere, and engaging effects, this battle is more narrative than spectacle, although it manages to be both. While Luke Skywalker loses a hand, the most crushing blow is dealt when Darth Vader reveals Luke’s true parentage. This series-defining twist showed that Luke wasn’t finished with his training by any means, and that the heroes were not yet ready for the challenges they were facing. Time and again, it is one of the most quoted, memorable moments in all of Star Wars.

The prequel trilogy introduced Star Wars fans into the first proper large-scale lightsaber battles between Jedi and Sith, taking place before the fall of the Jedi Order. The intense choreography, epic agility, and unique Force powers exhibited in these battles mark them as a higher scale than what came before. No prequel trilogy battle demonstrated these factors moreso than the “Duel of the Fates” from The Phantom Menace.

In a two-on-one battle between light and dark sides, fans were introduced to one of the most compelling Sith- Darth Maul- and a brand new type of lightsaber. His dual-ended weapon was the perfect counterbalance to Jedi Master Qui-Gon Jinn and his apprentice Obi-Wan Kenobi battling together against their newly revealed foe.

Scored by an epic soundtrack, this battle is an intense opening punch to the prequel trilogy filled with other exciting (and not as memorable) large-scale fights in the prime age of the Jedi. Also, until the Clone Wars animated series, this was the supposed end of Darth Maul, who quickly became a fan-favorite after this fight.

While this scene doesn’t carry the same nostalgic weight as many of the Darth Vader fights from the original trilogy, in recent years the prequels have been appreciated more for the new ways in which they expanded the Star Wars galaxy.

So, was this list strong in the Force? Or should we cleanse our kyber crystals and start again? If we missed something that you think should be on the list, Let Your Geek Sideshow and tell us in the comments below!