Let’s take some time to honor the legacy of Stan “The Man” Lee, counting down the Top 10 Stan Lee Cameos. His larger than life spirit lives on across Marvel films, comics, and video games- plus, a DC movie? Listen along and find out which cameos we chose as showcasing the best of his legacy. On November 12th, the world lost a comic book legend when Stan Lee passed away. Although this was a deeply sad loss, we as pop culture fans can’t help but celebrate the legacy that he put into place through his work at Marvel, and in the realm of fandom overall.

Known to most as the king of cameos, Stan’s larger than life personality will live on in countless works of Marvel comics, film, and more. He truly became a part of the worlds he created, and so in honor of Stan the Man, we’re counting down our Top 10 Stan Lee Cameos. 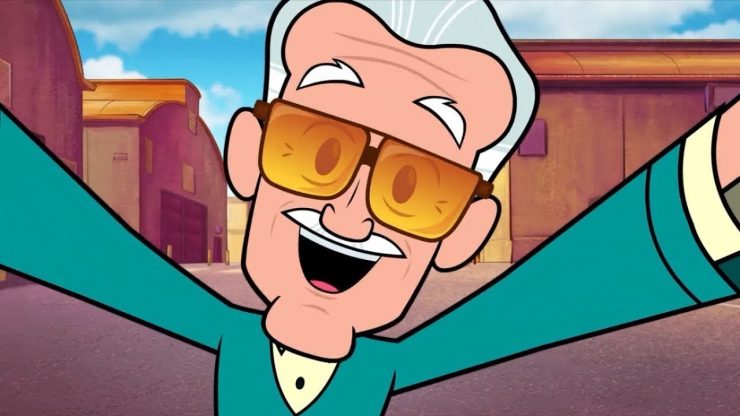 In this animated “superhero movie to end all superhero movies” Stan Lee makes a gratuitous cameo as the Teen Titans wander the Warner Bros. film lot.

This is Lee’s only DC movie cameo, which is pointed out to him in the film to humorous effect.  But, the King of Cameos decides that any attention is good attention, even in the wrong license, and utters his famous, “Excelsior!” to end this riotous cameo. 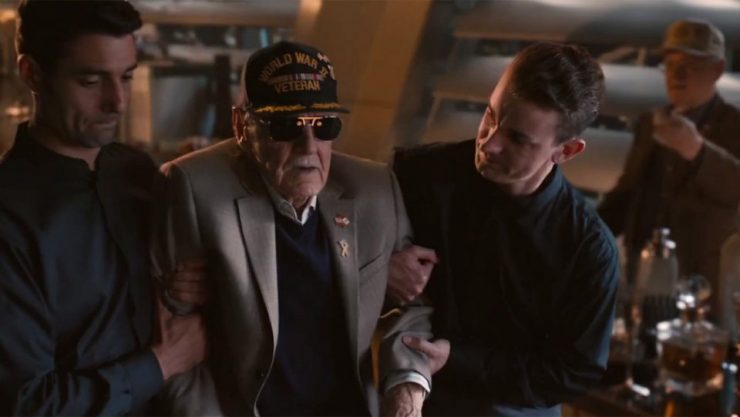 In this second Avengers film, Stan Lee appears as a war veteran in attendance at Tony Stark’s party.  While the Avengers mingle, Thor boasts of the strength of some Asgardian mead he has on hand, saying it’s more than any mortal could handle.  Stan quips that he can’t be scared by the god’s warnings, and takes a drink of the godly booze.  He’s later seen being carried out of the party, slurring his famous, “Excelsior!” catchphrase.

Before he passed, Lee stated this was one of his favorite cameos to film because he “got to film two scenes”. 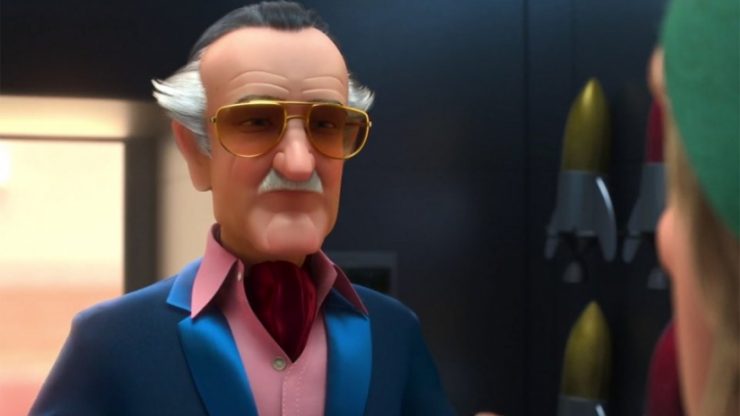 Many fans wondered if Stan Lee would make a cameo in this animated Disney film, which is in fact based on a lesser-known Marvel property.

He had a static cameo in a portrait in Fred’s house in the film, but he appeared in voice and in likeness during a post-credits scene of Big Hero 6, making this his first animated feature-film cameo at the time.

One of the most recent Stan Lee cameos has quickly become one of the most heartwarming- in Insomniac’s Spider-Man video game for the PlayStation 4, Stan Lee makes an appearance in a cutscene that’s so detailed in animation that it looks like Lee in live-action.  While Mary Jane Watson and Peter Parker try to sort out their differences in a local diner, trouble calls Peter away.

As Mary Jane pays the bill and watches Peter leave, Stan Lee appears as the short-order cook who remarks, “Love seeing you two back together again.  You always were my favorites.”  This meta-moment puts Lee face-to-face with his own creations, and gives Marvel’s world of New York a bit more of a sense of realism.

The Doctor Strange cameo is one of several Stan Lee moments that happen to take place on busses in the MCU.

While Strange and Baron Mordo are flung around the city in pursuit of Kaecilius, Stan Lee appears riding a bus, laughing while reading Aldous Huxley’s “The Doors of Perception”.  A fitting piece of literature for the film he’s in. 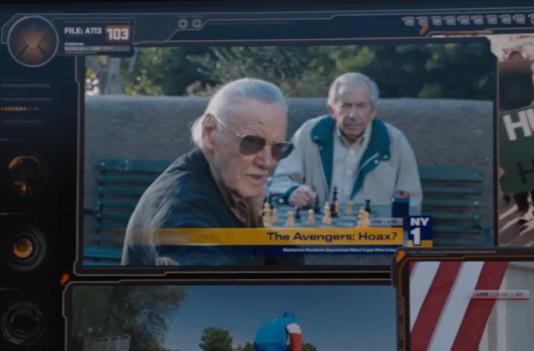 Lee actually filmed multiple scenes for this film, although one cameo was cut from the final release.  The one that makes it in features Stan the Man as a superhero skeptic following the incident in Manhattan.

Considering the sheer scope of this film, surpassing everything the MCU had previously managed, this cameo is especially humorous coming from Stan Lee himself. 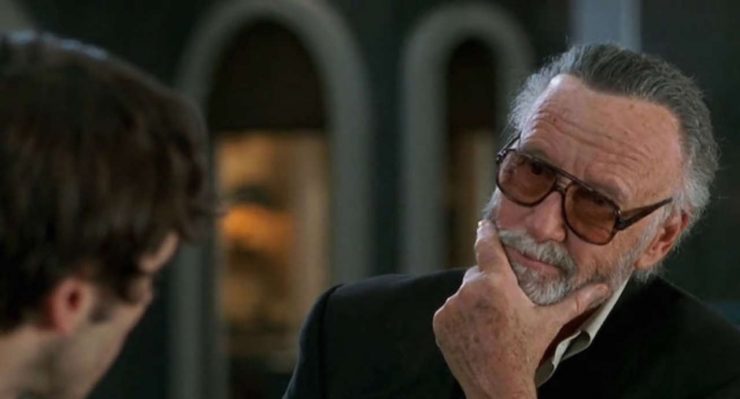 Stan Lee’s cameo in this screwball/stoner comedy just has to be seen to be fully appreciated.  Far before the days of the MCU, Lee makes his cameo in Mallrats as a pseudo-mentor to Jason Lee’s character in the film.

It’s more of an extended cameo/supporting role in the film that includes a lot of awkward knowledge about… well, the mechanics of superhero anatomy.  You’ll see what we mean when you watch the film. 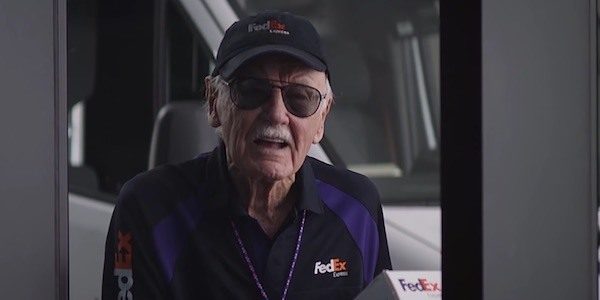 Stan Lee’s cameos often manage to inject a lot of humor into tense moments of action or drama in the MCU films.  His cameo in Captain America: Civil War breaks some tension between Tony Stark and James Rhodes following the devastating airport fight between teams Cap and Iron Man.

As a FedEx delivery man, Stan Lee misreads a package and asks for the residence of, “Tony Stank”.  Rhodey will never let him live that down. Where better for Stan Lee to appear in Thor: Ragnarok than Sakaar, the planet that homages the most classic of Thor designs and styles.  Stan the Man appears as a member of the Grandmaster’s crew in the gladiator arena, responsible for shearing Thor’s luscious golden locks with his less-than-steady hands.

Not many men can make Thor, god of thunder, beg for mercy like Stan Lee does. Regardless of your feelings on Spider-Man 3, this Stan Lee cameo may be one of the most touching moments, as Stan interacts with one of his favorite Marvel creations.  While looking at a marquee thanking Spider-Man for his heroics, Stan says to civilian Peter Parker, “You know, I guess one person can make a difference.”  This line captures the core and heart of all of Stan Lee’s heroic characters- beyond the powers and the costumes, they boil down to one person making a difference.

Stan ends the scene with a quick, “‘Nuff said.” Agreed. As a nice meta-MCU moment, the GotG Vol. 2 Stan Lee cameo gave a nod to one of the most prominent fan theories out there- what if Stan Lee has so many cameos because he is a Watcher? In this film, as Yondu and Rocket and Groot and Kraglin are jumping dizzyingly through wormholes, one brief break from the action sees them soaring past Stan Lee in an astronaut suit.

He’s surrounded by a group of Watchers, and before he was briefly interrupted by the spaceship barreling past, he was regaling them with stories of his various MCU cameos.  This moment was enough to make many hardcore fans’ heads explode with the sheer awesomeness of the implication that Stan Lee was in fact sided with the Watchers, the mysterious overseers of the Marvel Universe.

It’s a clear winner for the best Stan Lee cameo of all.