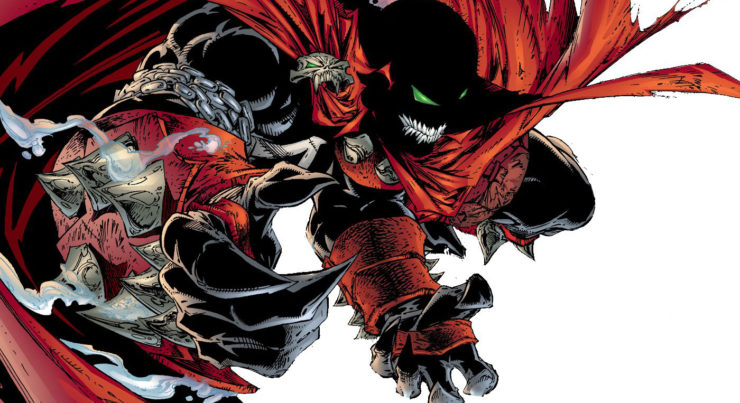 This week, we are weaving together a list of the Top 10 Super Hero Capes! These impressive threads add flair and fashion to any comic book character’s ensemble, giving our heroes some dramatic flair and occasional additional powers. They flutter and defy physics, rarely causing a disastrous fashion faux-pas, despite what you might have heard about jet engines.

Read along to find out which capes have comfortably settled on the shoulders at the top of our list. Let’s get started!

Parker Robbins, the Hood, is a villain in Marvel Comics who stole the cloak of a demon, giving him the power to teleport and turn invisible while holding his breath. This cloak also can see through Doctor Strange’s illusions, and Robbins uses it to perform crimes.

However, the Nisanti demon who formerly wielded the cape is slowly possessing him and will eventually kill him, as it comes from Dormammu’s realm. 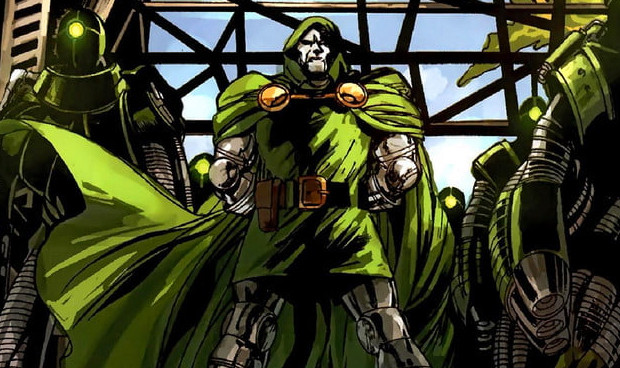 In Marvel Comics, you can carefully pay attention to those characters whose costumes come equipped with capes- in most cases these fashionable accessories are reserved for those with godly abilities, or those with god complexes. Victor Von Doom, sovereign of Latveria, arch-foe of the Fantastic Four, quite often falls under both of these categories.

His traditional look is a large green cloak with a matching tunic, perfect for billowing while he plots to destroy Reed Richards, or for draping over his throne as God-Emperor Doom of Battleworld.

Shazam, also known to some as Captain Marvel, has one of the more unique capes in comics. His half-length white cape with gold trim is known for hanging over one shoulder much like historical military capes- this may be due in part to his original Captain title.

Shazam’s cape sometimes comes with a hood, and has occasionally changed lengths, but his most famous cape clasps just over the shoulder, giving him this unique look. 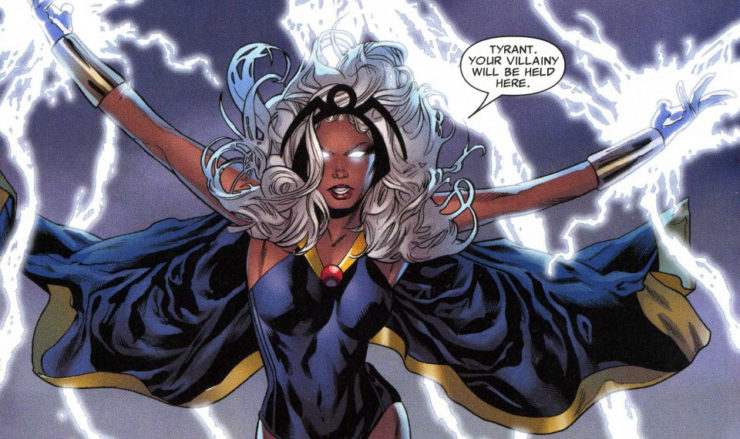 The goddess Storm has had several different styles of cape over the years, including the famous scoop-line white fabric that accompanied her famous 90s look.

Storm’s cape is always color-coordinated to her uniform and billows greatly as she exercises her Omega-level control over the elements. It adds a sense of grandeur to her already-regal look.

Mister Miracle, also known as Scott Free, is an escape artist from Jack Kirby’s Fourth World. From the world of New Genesis, he was traded to Apokolips as a child.

Mister Miracle is known for his red, yellow, and green costume, complete with a high-collared cape made from memory fibroid from his home world. His Mother Box, a technological energy box, can transform his cape into a defensive cocoon, destroying the cape once the transformation ends. 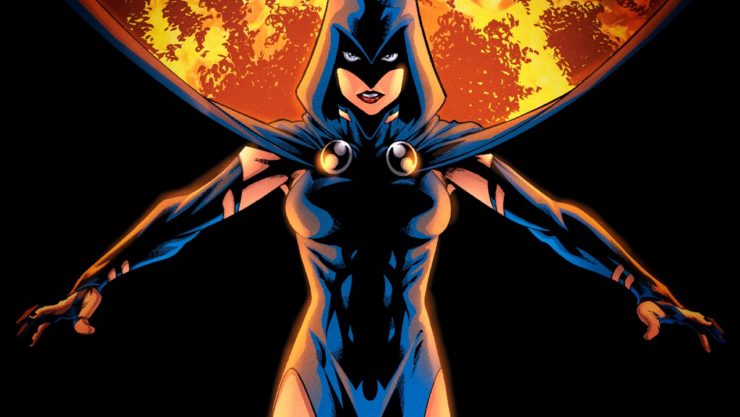 Daughter of the demon Trigon, Raven is known for her brooding personality, which is aided by her immense cape that often cloaks her face. Traditionally blue, the cape serves almost as wings to accentuate her avian codename, and the hood often forms a beak shape.

Across the Teen Titans animated series, as well as some comic book depictions, Raven’s cloak has changed colors to signify important changes to her persona. Most notable of these is her white cloak, which symbolizes an enlightened Raven, free of her father’s influence.

Tyrone Johnson is one half of Marvel’s duo Cloak and Dagger. After being exposed to an experimental chemical, Ty was seized by a hunger and shrouded in a strange darkness that was only eased in the presence of Tandy Bowen, Dagger.

Cloak’s cloak serves as both a disguise, as he tries to hide his shadowy nature, and as a physical representation of his Darkforce connection- his entire body is linked to a pocket realm of darkness that compels Tyrone to absorb the life force of other beings. 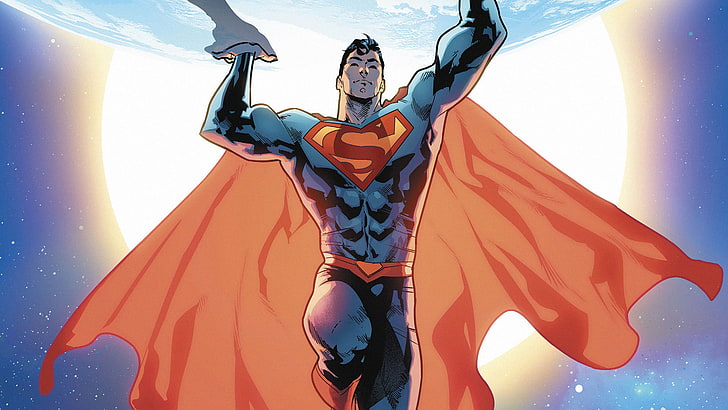 Superman’s cape is perhaps one of the most well-recognized among superheroes. Sometimes emblazoned with the symbol of the House of El, this red fabric actually has an origin as old as our hero!

As explained in one of his comic book appearances, the young Clark Kent was made his first super-suit out of the blankets he was swaddled in when escaping from Krypton. Apart from that, the cape has been shown to have extreme durability and protective properties, some of which have carried into the live-action DC Universe.

Any comic book fan who loved the 90s will tell you that Spawn has one of the coolest, creepiest overall looks of any vigilante. His massive red cape is one of the hallmarks of any illustration of him, with a ridiculously high collar and fabric proportions that seem to defy all physics and logic.

Sometimes rugged and tattered, sometimes long and flowing, the cape extends from his suit and is technically an extension of his necroplasmic body. It can transform to large proportions, protect him from bullets, act as a parachute, and grant him flight. It also just looks really cool. 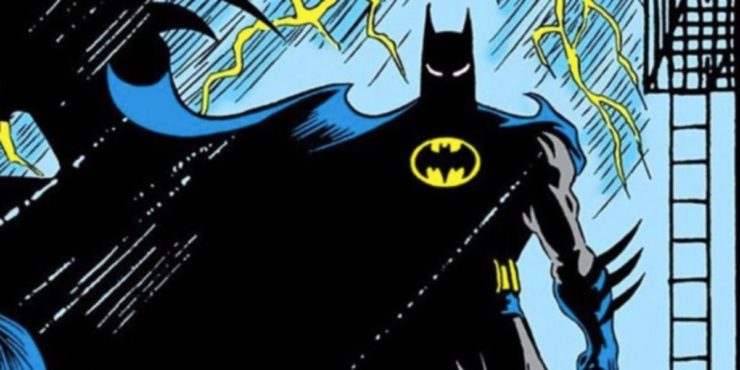 Batman’s cape enhances his silhouette, making him an even greater shadow to the criminals of Gotham. Sometimes simple fabric, other times a surrogate set of bat-wings, Batman’s cape has changed shape and function over the years, about as many times as his suit and symbol.

The cape makes him a greater target, appearing more imposing, which serves two purposes- make the criminals afraid, and confuse their aim. Batman just wouldn’t be Batman without his billowing cape!

The most recognizable part of Doctor Strange’s ensemble is the Cloak of Levitation, granted to him by the Ancient One. It has appeared in several comics as a blue cloak rather than a red one, but the famous red cloak with a pointed, arched collar is a powerful weapon and artifact in the Sorcerer Supreme’s arsenal.

The Cloak of Levitation enables hovering, flight at subsonic speeds, and can be ridden like a magical carpet. It also has some degree of autonomy, able to act even when not worn. It can grab onto objects, stop bullets, and has been destroyed and reformed several times over.

As fans have seen in the Marvel Cinematic Universe, the cloak even has a degree of sass to it, making it fashionable, functional, and a must-have in any superhero’s closet.