The 8 Most Mouthwatering Anime Dishes

It’s always the same adjectives with food writing — mouthwatering, craveworthy, showstopping — but the most appetizing dishes don’t come from Michelin-starred kitchens or even a family member’s top secret recipe. No, that honor is reserved for anime food.

When it comes to food scenes, the most enchanting visuals occur in anime. They’re hyper-realistic with meticulous detail and the colors always jump right off the screen. Plus, the scenes with food in them are often filled with emotion, whether we see a character ravenously shoveling food as fast as they can or tenderly sharing a favorite snack with a new friend. Anime communicate with their audiences through a universal love language: food.

Without further ado, please clear your plate (or prep your kitchen) for the eight anime dishes with the best food aesthetic. 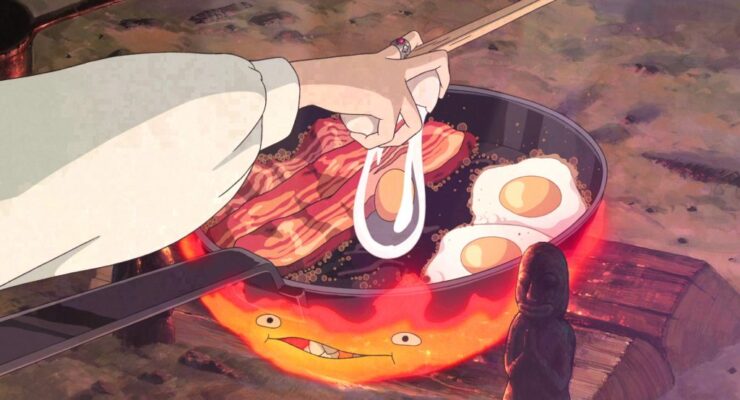 Studio Ghibli is by far the frontrunner when it comes to hand-drawn food. In this well-known scene from Howl’s Moving Castle, Howl prepares breakfast (with Calcifer’s help, of course). The thick slabs of bacon and sizzling eggs practically jump off the screen and if you close your eyes, you can almost smell this mesmerizing, magical meal. 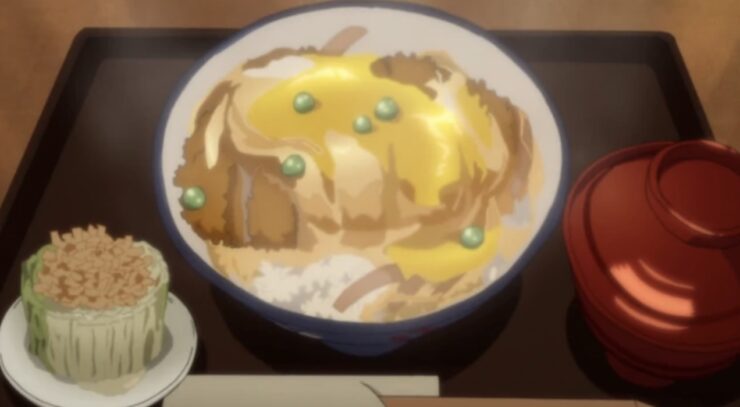 The pork cutlet from Yuri on Ice is the definition of home-cooked comfort food, and it serves as the inspiration for Yuri’s renewed passion in figure skating. This savory dish is also a heartwarming connection between Yuri and his coach, Victor, as their affection for each other comes together like the ingredients of a favorite recipe. 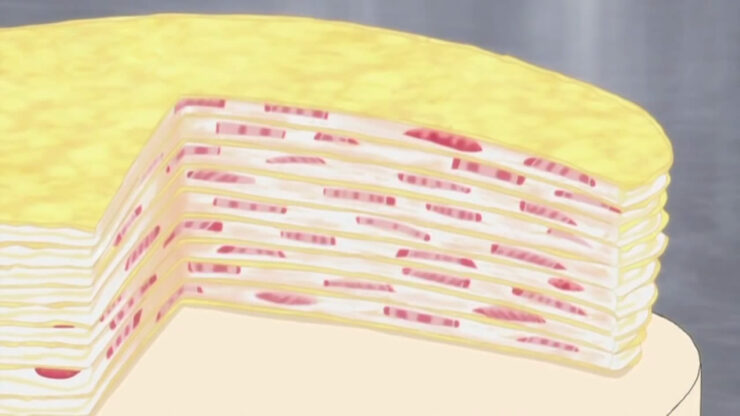 If dessert is what you’re craving, then this mille crepe from Yumeiro Patissiere is just what the baker ordered. In this shoujo anime, Ichigo develops her talent for identifying every ingredient and flavor of a dish, training hard to become a professional pâtissière. Incidentally, her name means strawberry, so the delicate dessert above is a fitting choice with its multiple layers of pillowy crepe nestled between sweet creme and fresh strawberries.

Shrimp Tempura – From Up on Poppy Hill

This cooking scene from Studio Ghibli’s From Up on Poppy Hill stands out because the animation has that rare quality of activating all five senses. Even without audio, you can hear the crackle of the shimmering oil and the crinkle of the newspaper under the tempura. The wooden chopsticks roll underneath the viewer’s fingers as they envision the crisp crunch of each bite, still hot from the pan. 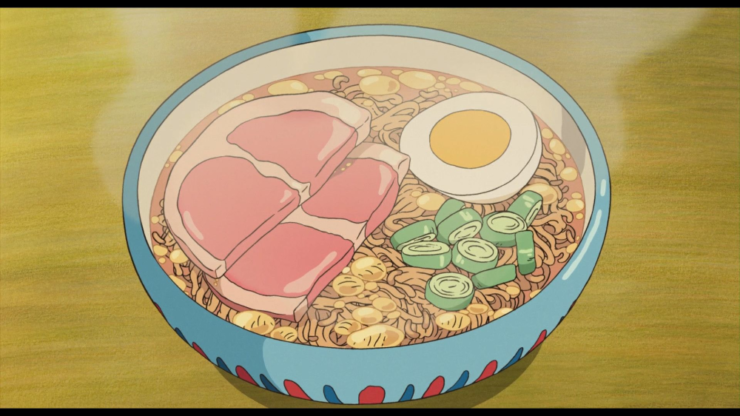 The colors in this Studio Ghibli depiction of ramen are so warm and vibrant that you can feel the steam rising up from the beloved noodle dish. As Ponyo tries her ham ramen for the first time, we join her in her excitement because we can taste the soothing broth, the salty ham, the perfectly cooked egg, and the slight crunch of fresh scallions against the slippery noodles. It’s comfort in a bowl, a perfect escape from a wintery storm.

For many western audiences, Brock introduced these tasty-looking snacks as jelly-filled donuts, but actually they’re onigiri (rice balls). The English Pokémon dub from 4kids thought “jelly-filled donuts” would be more easily understood, and it became somewhat of a meme. Unlike jelly donuts, onigiri can be filled with sweet pastes, savory fish or meat, pickled vegetables, or anything you’re craving! The filling is surrounded by sticky rice and secured with nori, or seaweed. Names aside, onigiri are perfect on-the-go snacks because of the limitless filling options and they’re easy to pack — Brock knew what he was doing! 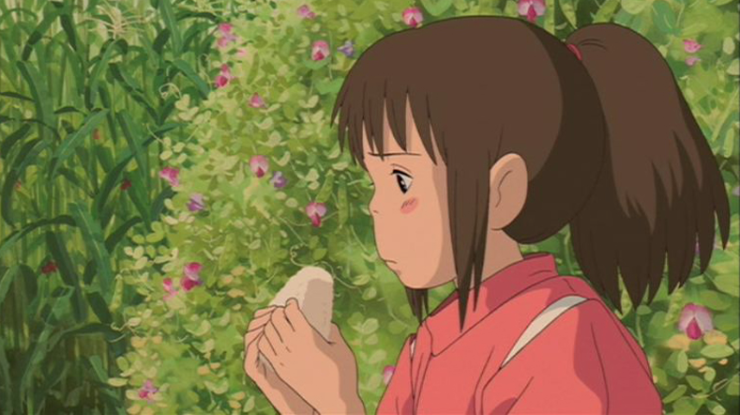 Of course the many decadent buffets and overflowing feasting tables stand out from Spirited Away, but the most heartwarming food scene is about a snack. When Chihiro becomes overwhelmed with worry for her parents, she sobs uncontrollably but Haku is there to give her a distraction: onigiri. The fluffy clouds of rice and this sincere act of friendship are enough to lift Chihiro’s spirits. Don’t worry, if you’re crying into your rice just thinking about it, the salt adds flavor just like a nori wrap would. 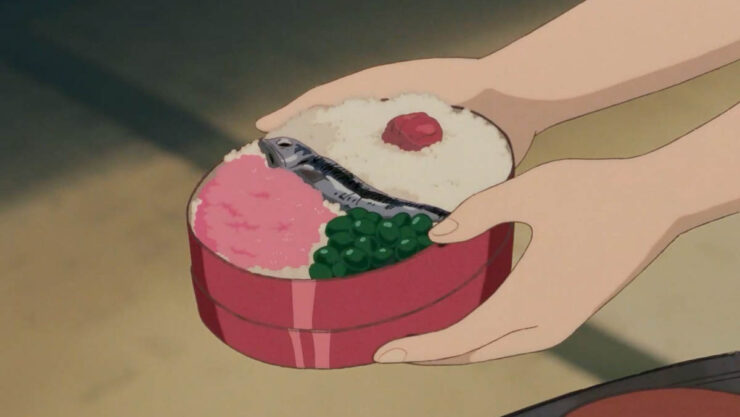 A bento box is one of the most well-known symbols of expressing love through food. Each item is prepared with special care and placed in its own spot so that the flavors can exist in harmony. Bento boxes are often prepared in advance for those we care about most, as shown in Totoro when Satsuki makes one for her little sister, Mei. This bento box includes rice, a smelt fish, pickled plum, edamame, and a Japanese dried fish flake topping called sakura denbu. 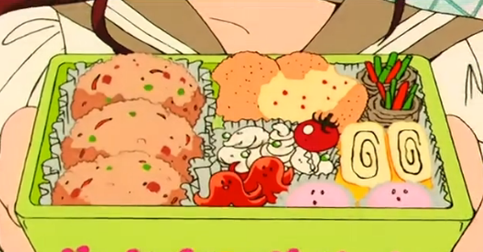 In this famous lunchtime scene from Sailor Moon, Usagi (AKA Sailor Moon) spots Makoto (AKA Sailor Jupiter) with this bento box set up and she is immediately enamored with Makoto’s impressive lunch game. Makoto’s bento includes crunchy croquettes, onigiri with peas and carrots mixed in, macaroni salad with a cherry tomato, octopus-shaped sausages, some vegetables in the corner, perfectly fluffy tamagoyaki (omelette), and a couple of pink mochi for something sweet. Saving the world builds up an appetite! 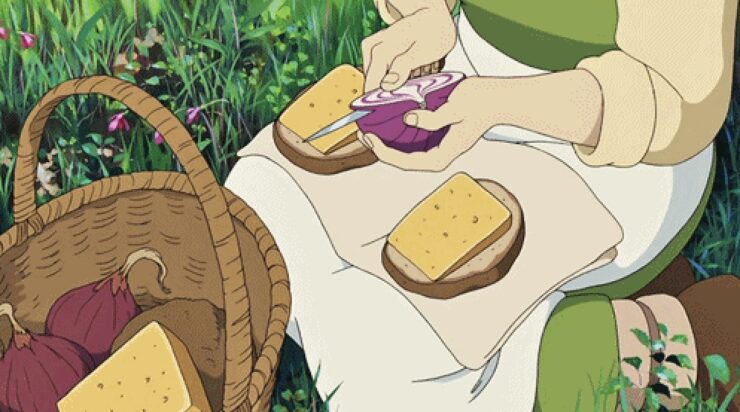 While a bento box or French pastry can require a lot of kitchen prep, other dishes are comforting in their simplicity. Take this sandwich from the picnic scene in Studio Ghibli’s Tales from Earthsea. By themselves the ingredients might not be remarkable, but when you’re lounging on the grass surrounded by the peace of nature, try denying the charm of a rustic sandwich like this cheese, onion, and bread combo.

Somehow, anime food embodies the essence of food better than real life does sometimes. Though don’t let that stop you from attempting to recreate these dishes on your own! There’s just a certain magic in seeing the vibrant colors and swirling steam combine with crisp lines and perfect illustrated textures to really bring a dish to life.

Which of these anime foods are you craving now? Do you have a favorite that we missed? Let us know in the comments after you head over to this year’s Anime Gift Guide and, as always, don’t forget to Let Your Geek Sideshow! 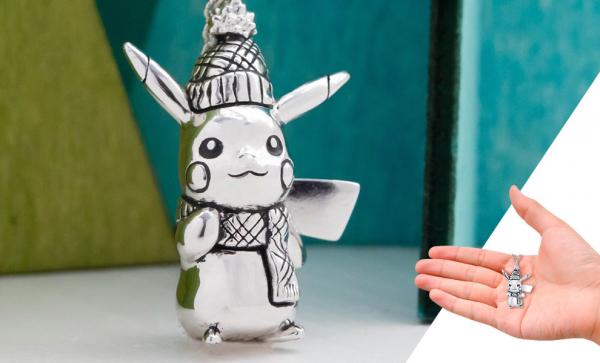 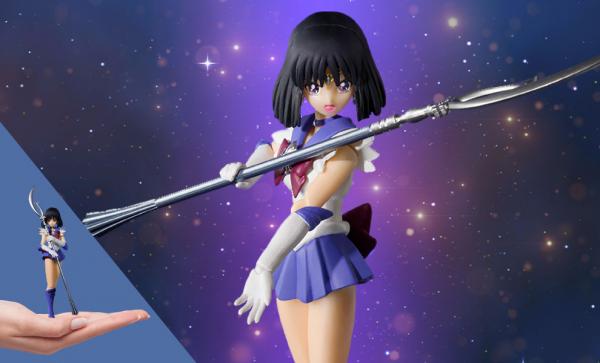