The Top Deaths by Dinosaur in Jurassic Park

The Jurassic Park and Jurassic World films are unique combinations of science fiction as well as horror. Of course, the dinosaurs inspire terror and fascination alike. Their size, their teeth, their every little detail make them the stars of the show. From the very first raptor kill, audiences were caught in the dinosaurs’ claws. Across the franchises, people were killed by dinosaurs in ways ranging from humorous to bone-chilling.

The humans of the franchise, however, are arguably the villains. They are the ones who subject fellow humans to the dangerous presence of dinosaurs, bringing back these prehistoric animals and forcing them into an unfamiliar time period.

With that in mind, many of the humans in the franchise are greedy backstabbers, like Eli Mills, or heartless hunters such as Ken Wheatley. Their horrific actions are the unforgivable ones. But the dinosaurs? They’re just bein’ their dino selves. When they kill, it’s nothing personal … mostly. Here’s our ranking of the best deaths by dinosaur in the Jurassic Park and Jurassic World franchises.

The Dino Death List will use the Mosquito Ranking Scale, from 1 to 5 — 1 being a substantial dino death but 5 being the apex predator. 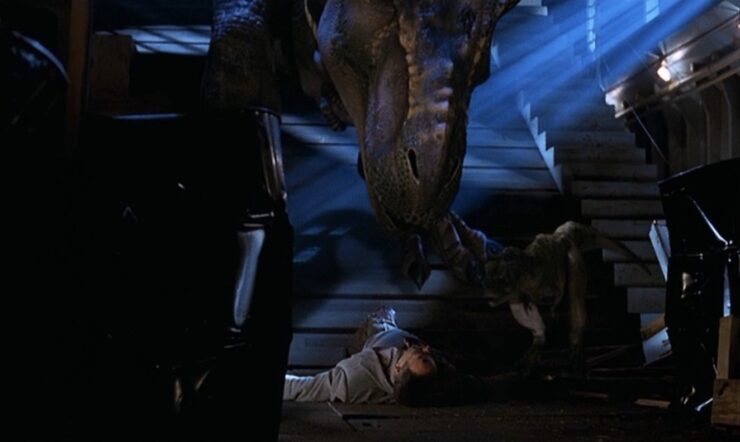 Nobody Puts Baby T-rex in a Corner, 1 Mosquito

Everybody’s gotta start someplace, right? Even one of history’s most prolific killers in the animal kingdom, the Tyrannosaurus rex, has to take some baby steps when learning how to hunt. That’s why this heartwarming father-son scene starts the Dino Death List off right. The T-rex helps his baby T-rex learn how to kill using Peter Ludlow, John Hammond’s nephew.

Truly, you can’t go wrong with the classics. And if you’ve seen this scene, you can’t unhear that squelch as Donald Gennaro’s flesh is ripped apart by the T-rex’s teeth in the torrential rain. What a crappy way to go. 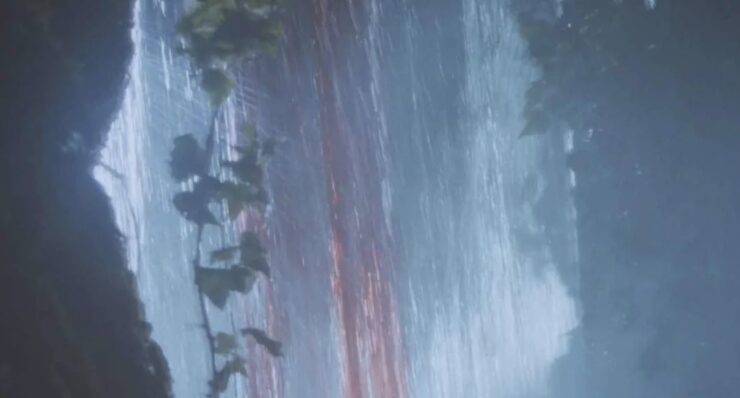 As the group hides from the T-rex behind a waterfall, paleontologist Robert Burke believes he is safe. However, he’s quickly snatched up by the dinosaur and his death plays into an ongoing theme of Jurassic Park: The most unassuming aspects of nature can have catastrophic consequences. For example, unexpected reproduction due to frog DNA and … a snake in your shirt.

With Dieter’s death, Jurassic Park once again delves into classic horror movie techniques. Sometimes the scariest deaths are the ones you can’t see, but must imagine for yourself — aided, of course, by dinosaur screeches and human screams. And when that water runs red, you know it’s bad. 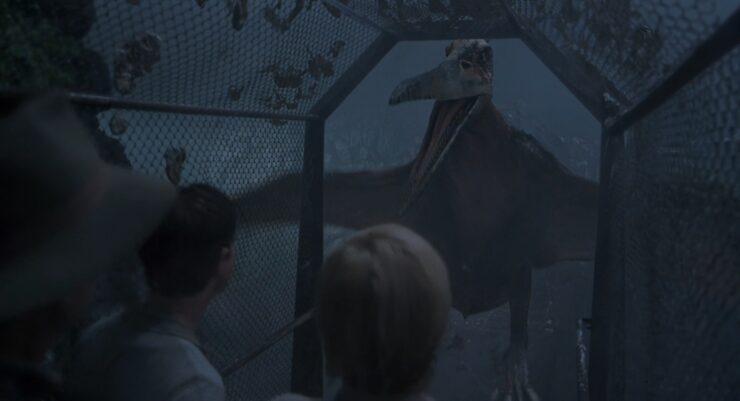 Billy Brennan’s demise is one of the few noble deaths caused by a dinosaur. Usually, the person being killed is a contemptible human but in this case, Billy was a hero. Though he managed to save Eric within the terrifying, fog-filled aviary, Billy was tragically pecked at and snatched away by vicious pteranodons. 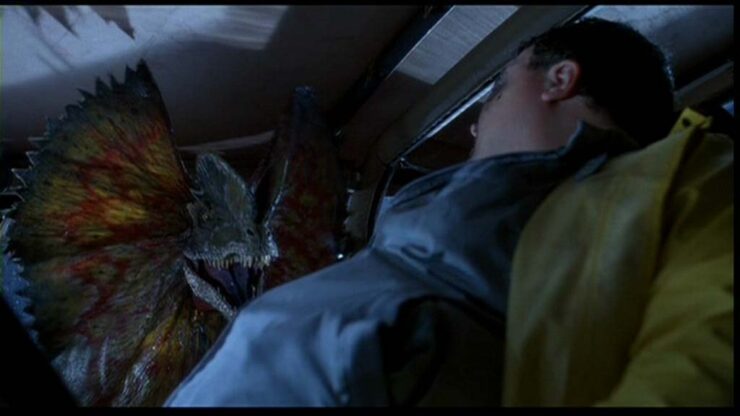 A classic example of the villainous character whose death is more of a “ha ha” than an “oh no!” is Dennis Nedry. While everyone else is simply trying to survive, Nedry tries to profit from the chaos. He wants to sell stolen dino DNA. However, his plan is foiled by a mischievous dilophosaurus, whose grin hides a poisonous surprise. 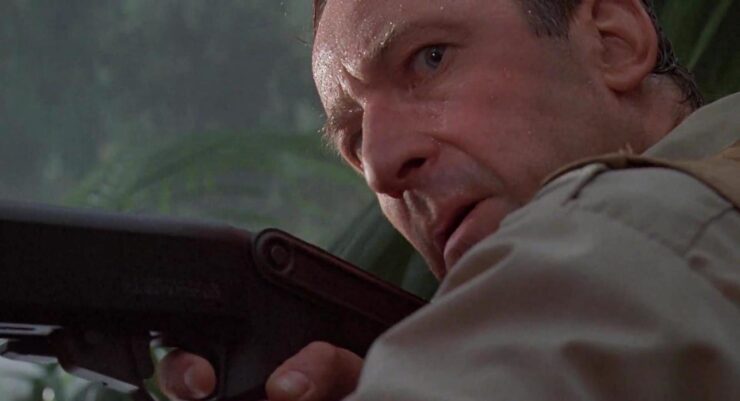 As hunter Robert Muldoon stalks through the jungle, we hear those unsettling chirps. The bushes shake as if they’re alive. With one last screech, a velociraptor erupts from the foliage and pounces on Muldoon. Extreme closeups and shrill vocalizations heighten the horror after Muldoon delivers his famous last words, “Clever girl.”

You Can’t Handle the Tooth, 4.5 Mosquitoes

The horrific hybrid created by InGen, the Indoraptor, is visually and behaviorally sinister. But in this scene, Ken Wheatley plans to extract a tooth from the sleeping Indoraptor’s mouth to use for his own devices. Sound familiar? Unfortunately for Wheatley, the viciously intelligent Indoraptor is only faking. Wheatley never does get to make that necklace. 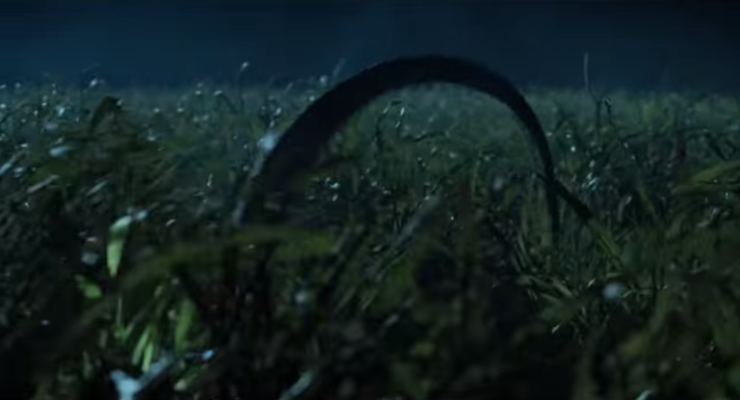 Pain in the Grass, 4.5 Mosquitoes

In a scene that mimics many famous horror movies, the group must pass through a field of tall grass at night. There are no dinosaurs in sight but, one by one, the humans are pulled down with the swish of a tail. Against the pack-hunting tactics of the velociraptors, we’re all just prey waiting to be torn apart.

Throughout these films, the most memorable deaths trick viewers into a sigh of relief. “Oh good, they’re going to make it after all.” Except, as is the case with personal assistant Zara Young, just when you think it’s safe — danger strikes. Young meets her death caught in the snapping beak of a pteranodon, which is then devoured by a monstrous mosasarus. Talk about a combo meal.

Honorable mosquito mention goes to the random man in San Diego eaten by the rampaging T-rex in The Lost World — a cameo by David Koepp, the screenwriter of Jurassic Park and The Lost World.

What’s your favorite death scene in the Jurassic Park and Jurassic World franchises? Will you be seeing Jurassic World: Dominion? Keep the conversation going over at side.show/geekgroup, and don’t forget to Let Your Geek Sideshow! 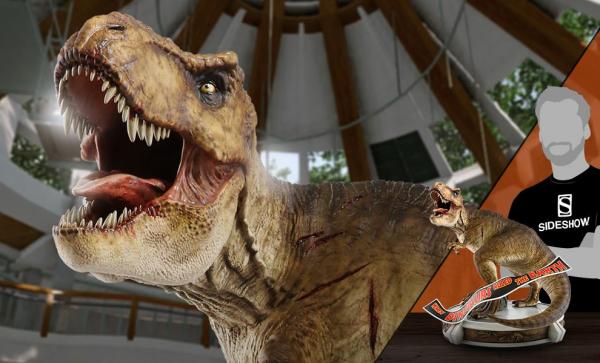 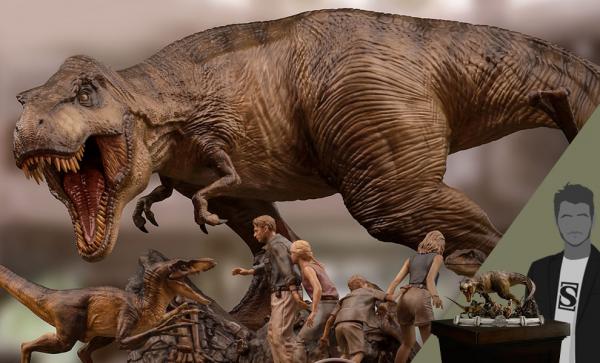 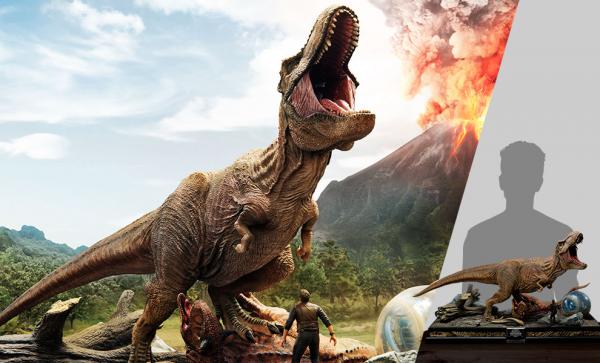 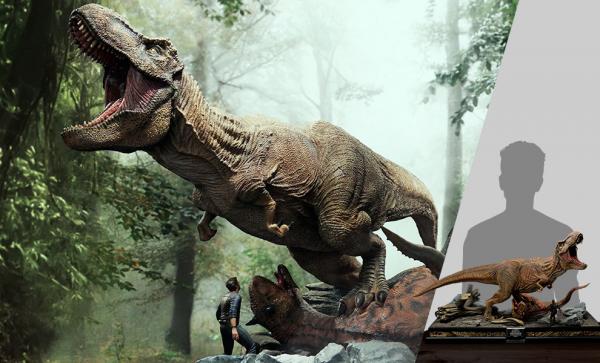