Listen up, &%$#*@$! Season 3 of Harley Quinn is halfway through and the jokes keep coming one after the other for Harley and Poison Ivy. Turns out The Joker’s not the only in town who serves up the laughs — Harley Quinn is on the case! Things in Gotham have already taken so many turns our heads are spinning. Swamp Thing is a granola bro, Bane is a Sex and the City fan, and Joker is somehow the best candidate for mayor?!

Here’s our roundup of the funniest one-liners, allusions, jokes, and dialogue from season 3 so far! All your favorite members of Batman’s Rogues Gallery and the Bat-Family are here with their best material. If you’re looking for a Punchline though, check the trash.

“Yeah, thanks for the T-shirts and all but the only squad I’m joining is Cobb.” – Harley Quinn

Harley has always been a shining star, but she really re-entered the limelight with the Suicide Squad films. Staying true to Harley Quinn‘s tongue-in-cheek tone, Harley pokes fun at her live-action counterpart’s career. But this Harley’s only up for one kind of squad, and that’s the Cobb Squad with her gal pals and her main gal, Ivy. Better luck next time, Amanda Waller.

“I think it’s an appropriate amount of serious.” – Nightwing

Over the years, Batman has become known for his gravelly voice that strikes fear into the hearts of evildoers everywhere. Nightwing, in his ongoing quest to move on from Robin, attempts to do his own serious voice. Batman is quick to point out Dick Grayson’s style choice. Seems a bit like the bat calling the kettle black, doesn’t it?

“Why do you think I kept making Jeff Goldblum references?” – Harley Quinn 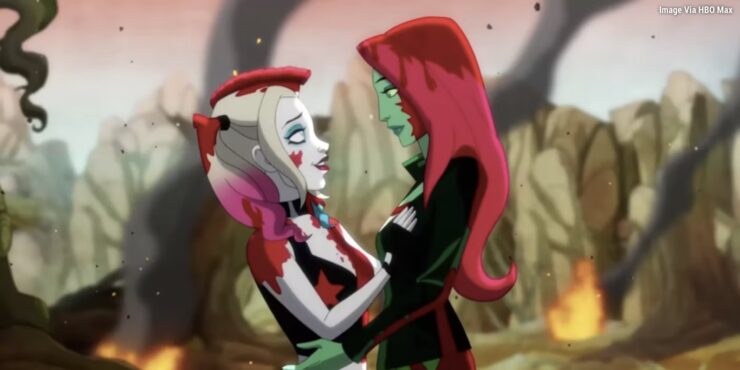 Given her love of gruesome mutilation and nonsensical deaths, it makes sense Harley would be a big Jurassic Park fan. After all, it’s apparently 60% of her personality! And those movies have a serious kill count. Looks like Harley knows what she and Ivy will be watching on their next movie night.

“I couldn’t help but wonder, was the teller telling the truth? Was I depressed? Perhaps my identity had been stolen … by myself.” – Bane

Speaking of fandoms, it appears Bane is a big fan of Carrie Bradshaw voiceovers. As he is having an existential crisis, the man of muscle and Venom uses a Sex and the City inner monologue to work through his issues. And just like that, Bane discovers the value of introspection.

Continuing our glimpse into Bruce and Selina’s attempt at the domestic life, we see the couple in a compromising position within the Batcave. Despite his eagerness, Catwoman lets Batman know his services are no longer needed. Meow.

“You might say the hardest riddle I ever solved was my own sexuality.” – Riddler 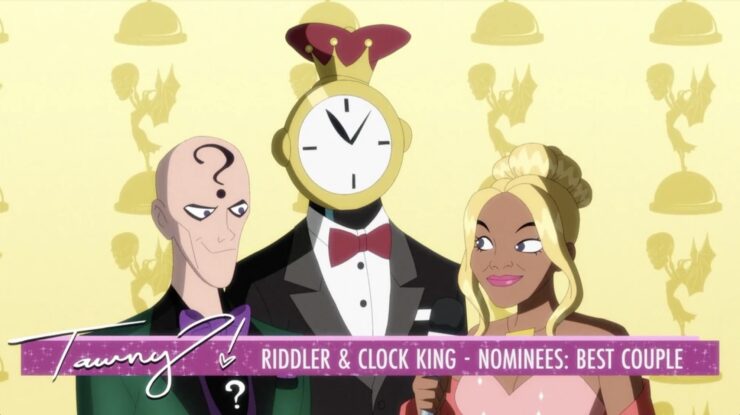 At the 83rd Annual Villy Awards, Riddler and his boyfriend Clock King are nominated alongside Harlivy for Best Couple. On the red carpet, Tawny Young asks Riddler about his romance with Clock King and, as Riddler notes, luckily he solved the riddle just in time. Definitely a couple to watch out for!

“How’d you come up with the answer? I don’t know, maybe because my son can count to fricking seven! I hate this Common Core!” – Joker 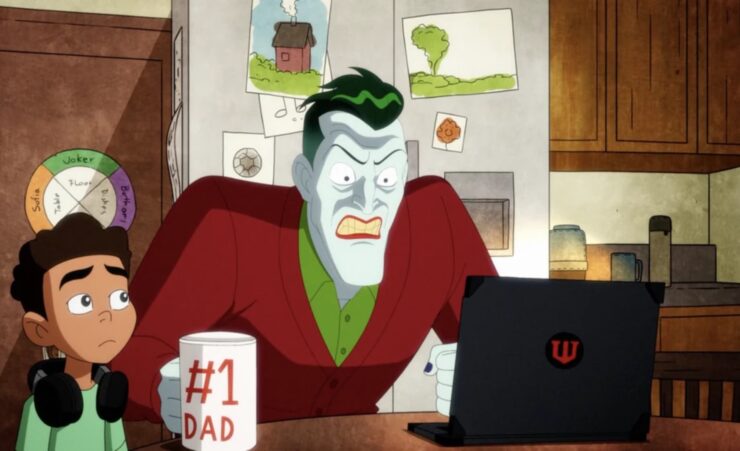 Ah, yes, Joker, the unexpected spokesperson for parents, students, and teachers everywhere! This season sees Joker embracing his role as a family man even more. Here, he’s helping his stepson Benicio with homework. We all know nothing is more stressful than homework hour at the kitchen table, even for a super-villain.

“Don’t cry, I never know what to do with wealthy male tears.” – Catwoman

It’s established that Catwoman and Batman have a side fling going on. But it’s safe to say that the Bat is a little more into the Cat, as shown here. Catwoman is calm, cool, and collected but Batman is tripping all over himself. She’s not afraid to put him in his place and it seems like maybe Bats is into that.

“Is the only thing you know about me that I like cats?” – Catwoman 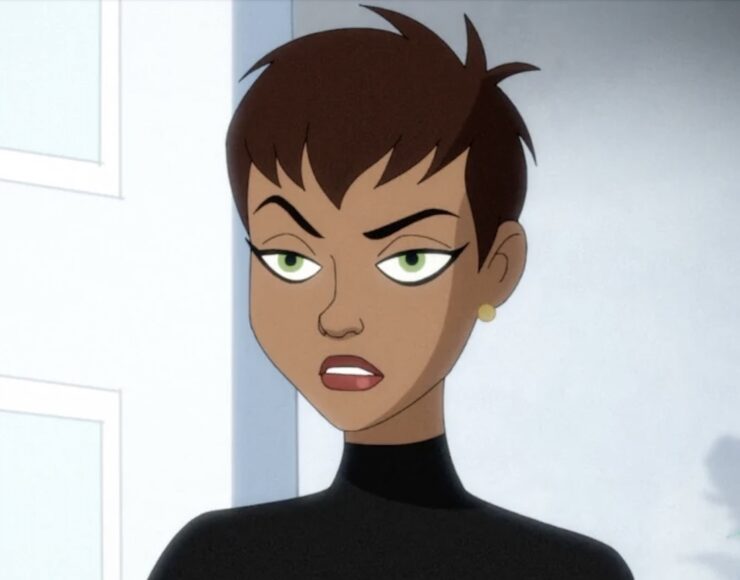 Honestly, Catwoman’s interactions with every other character turn into a roast. And we’re here for it! She points out Bruce’s inept attempt at connection when he shows up at her doorstep with some Persian cats — and yes, he did name them after his dead parents. Lots to unpack there and Catwoman simply doesn’t have the time.

While they attempt to track down Swamp Thing, Harlivy comes across John Constantine. He knows where Swamp Thing is but will only reveal the info at a price: a drinking game. Harley’s up for the challenge and she gives him this magical new nickname before they dive in. 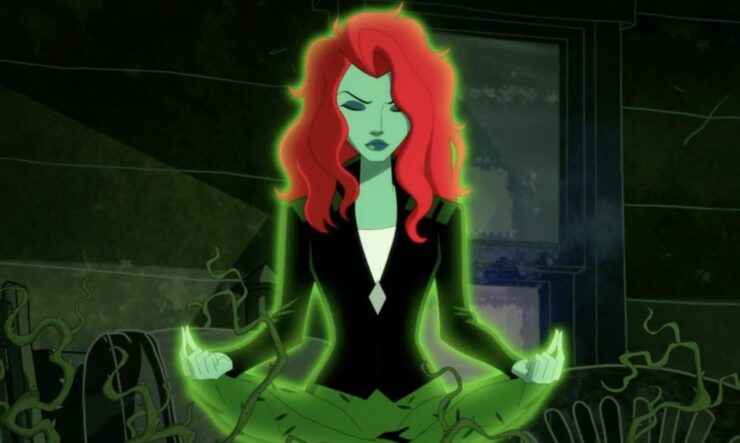 Ivy isn’t one for heartwarming lessons and wasted time. She just wants to save her best friend Frank! So when Swamp Thing helps her realize that she was the only thing stopping her access to the Green, Ivy is over the after-school-special nonsense. It’s time to get %@*# done.

“The only thing I’m blowing up is your waistline with my yummy dish.” – Joker

Forget Batman. Joker’s worst adversary is none other than Debbie, a fellow parent. In the past he might have resorted to nefarious schemes to take Debbie and her racism down but now, Joker’s gonna kill her with kindness. And maybe a few bones in her arroz con pollo.

He might have two faces, but Harvey Dent has good taste in early-2000s pop punk. Don’t deny it — you sang along during that villainous monologue, too.

Pretty much everyone besides our main Harley Quinn heroines are revealed to be monstrously inept, but Commissioner James Gordon really takes the cake. When Two-Face sets up Joker and his stepson Benicio for a rollercoaster ride to their death, all hope seems lost. Suddenly, a shadowy figure drops in from above and Benicio yells out “Superman!” thinking they’re finally saved. No dice, though, just Jim bumbling his way onto the scene. Even The Mayor notes that Gordon is what the French call “les incompétents” (a sly reference to Home Alone!).

The villains of Gotham continue to run the doomed city into the ground, and we wouldn’t have it any other way. Really brings a tear to your eye (and a bat to your kneecaps if you get in Harley’s way).

Join the conversation alongside other Harley Quinn fans in the Let Your Spoiler Sideshow Facebook Group, and don’t forget to Let Your Geek Sideshow!