Star Wars™ has quite a few incredible female characters. From the original trilogy’s Princess Leia Organa™ and the prequel trilogy’s Queen Padmé Amidala™ to Ahsoka Tano™ from The Clone Wars™ and Hera from Rebels™, plus Iden Versio™ of the video-game universe, these dynamic, powerful women are some of the strongest characters in our favorite galaxy far, far away. Yet they were never the main characters of their stories.

Then came the sequel trilogy. Encompassing Episode VII: The Force Awakens™, Episode VIII: The Last Jedi™, and Episode IX: The Rise of Skywalker™, these newer Star Wars films finally brought us a female protagonist: Rey™, the heroine, the scavenger, the orphan, and the future of the Jedi™.

Let’s break down some of Rey’s best moments below. 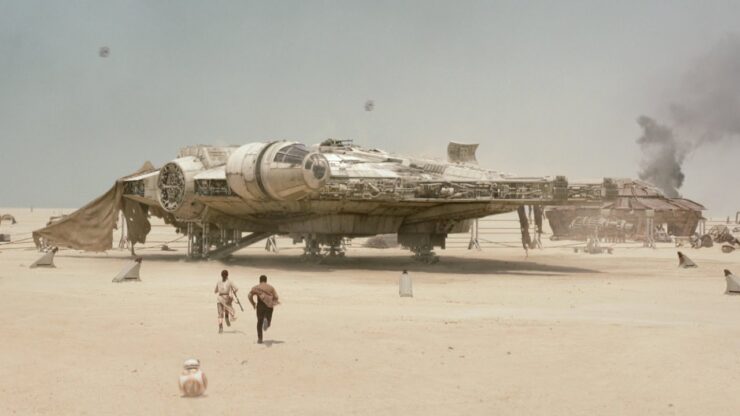 We first meet Rey (Daisy Ridley) on the desert planet Jakku™. She lives a quiet, difficult life, collecting bits of metal to sell for portions of food. She seems ordinary, with a love of old lore and legends about rebel pilots and Jedi. Then, one day she rescues Poe Dameron’s™ (Oscar Isaac) droid and everything changes.

BB-8™ is hiding secret information. The droid’s presence already complicates Rey’s future, but her situation is further jeopardized when former stormtrooper™ Finn™ (John Boyega) allies with her. The First Order™ — the sequel trilogy’s version of the Empire — sends TIE fighters™ to attack the trio.

They escape on a “garbage” ship that Rey steals from a scrapyard. Rey flies the Millennium Falcon™ on her own by combining luck and skill, a daring adventure to kickstart the grand space opera that is the newest Star Wars saga. 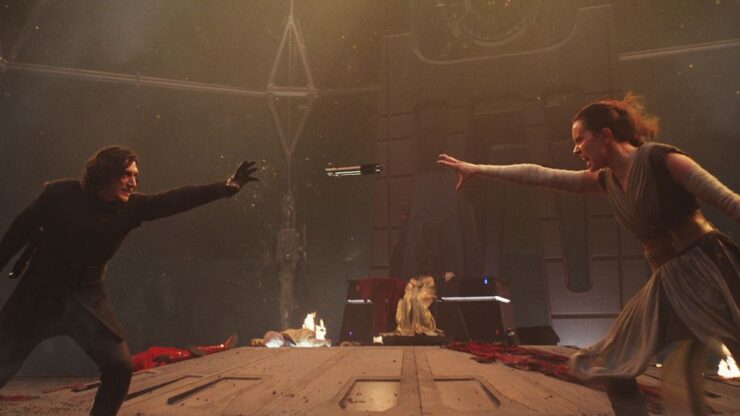 In The Last Jedi, Rey willingly boards Supreme Leader Snoke’s™ capital ship so she can convince Kylo Ren™ (Adam Driver) to rejoin the light side and the Resistance. She gets herself captured because she believes in this man so much. She is bound to him, even tortured by this dark side wielder, yet still remains confident that Han Solo’s™ (Harrison Ford) son can be redeemed.

Things seem to go well when Kylo Ren defies his leader and kills Snoke instead of Rey. The following lightsaber™ battle is epic, colorful, and promising. Our hero and villain are fighting side by side to defeat true evil, and Rey takes the opportunity of the calm after the battle to ask Kylo Ren to join her.

Instead, Kylo Ren asks Rey to join him as the Supreme Leader of the First Order. Power hungry and selfish, he thinks only of ruling with iron fists over an oppressed galaxy. Rey leaves, disgusted and distressed, yet she never gives up hope. 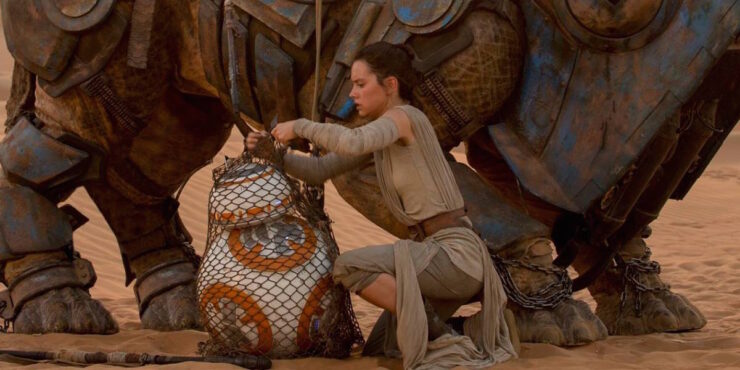 BB-8 could not have survived on his own on Jakku. With Rey’s assistance, the plucky little droid escapes a scavenger. Rey fixes BB-8’s bent antenna, and the two lonely characters form a sweet friendship.

Rey allows BB-8 to tag along to her home, where he is safe from people trying to sell him for parts. Later he accompanies her to the outpost where she exchanges her own findings for meals. Unbeknownst to Rey, there is a bounty on BB-8, and the portion-dealing scum she’s bartering with offers her so many portions for him that she’s left speechless.

Yet Rey refuses. She doesn’t even know about the secret information BB-8 carries — the map to Luke Skywalker™ (Mark Hamill) — but out of the goodness of her heart she won’t just pawn him away. Like any true hero, she is selfless with a steady moral compass, and this moment is a prime illustration of that. 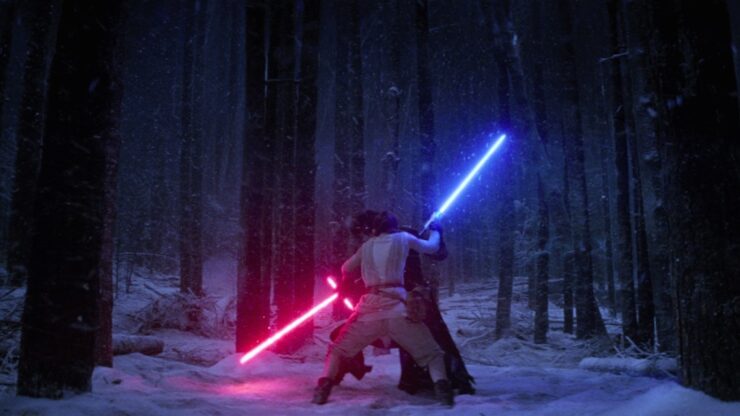 The first lightsaber duel between Rey and Kylo Ren is one of the coolest lightsaber fights in all of Star Wars. Set on Starkiller Base™, its snowy scenery is a stark contrast for Rey, who grew up with unending sand and sunlight. Darkness obscures the entire forest, which is full of tall black trees not unlike Kylo Ren, who towers over our heroine.

This is all very intentional. Rey is just learning the ways of the Force, and we are supposed to think she is overpowered and out of her element. Although she is picking up new skills quickly, she doesn’t have any training with a saber, and attacks with brute strength.

Rey’s novice strategy gets her wounded and backed up to a cliff. We feel the tension and the concern, the impending loss as well as Kylo Ren’s ruthlessness. Yet in a moment of clarity, Rey channels the Force. This energy grants her peace and power, and she turns the fight to her advantage in the next instant. If there was ever any question that Rey was going to be a worthy protagonist, this duel answers it. 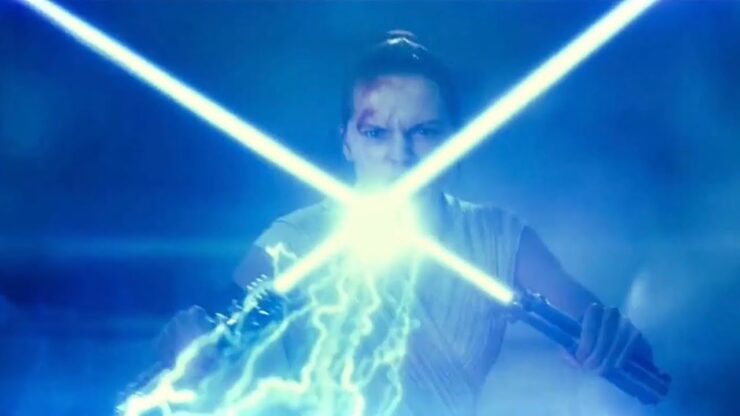 The culmination of the Star Wars sequel trilogy comes with the shocking revelation that a cloned version of Emperor Palpatine™ (Ian McDiarmid) has been manipulating the First Order and causing most of the horror in the galaxy. In the Sith Temple on Exegol™, Rey faces this villain with the help of Ben Solo™, ready to die to bring about victory for the Resistance and the light side.

Palpatine drains Ben and Rey of their life to rejuvenate himself. Weakened, Rey searches within for any ability to go on. She finds it in the voices of the past Jedi, including Caleb Dume/Kanan Jarrrus™ and Obi-Wan Kenobi™, among others, who lend our heroine the strength necessary to defeat a near-immortal Sith Lord™.

To combat this, Palpatine attacks Rey with his signature lightning. She is able to deflect it and kill him, thus denying his words, his history, his attempted ownership over her, and every consecutive evil deed. Rey channels all the Jedi, but she has also become the last one herself, and an incredibly powerful one at that.

What’s your favorite Rey moment? Look within for the answer, read about Kylo Ren’s Best Moments next, then share your thoughts with other fans at side.show/geekgroup — and don’t forget to Let Your Geek Sideshow!