Rogue One: A Star Wars Story™ (2016) is one of the most inspiring Star Wars™ films to date. It follows a group of ragtag Rebels as they change the course of the galaxy’s fate forever. This emotional narrative is half war film, half sci-fi. It pulls on our hearts through gorgeous environmental shots, tense action sequences, and beautiful character dynamics.

The script is also wildly impressive. Managing to seamlessly transition between tragedy and comedy, the screenplay and dialogue give us many memorable moments. So below, let’s explore just one aspect of Rogue One’s greatness: the dialogue. From the funny to the uplifting and beyond, get ready for a look back at a few of the best Rogue One quotes.

“Rebellions are built on hope.” 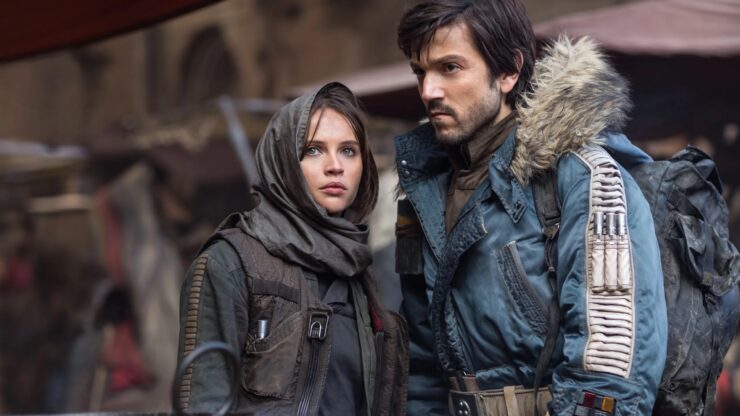 At the start of Rogue One, Jyn Erso™ doesn’t think the Rebels’ cause is worth the risk. She also doesn’t think that the larger public will lend them enough support to overthrow the Empire. Cassian Andor™ disagrees. He argues that as long as they have hope — a constant theme throughout Star Wars — they will succeed. Later, when the Rebels are discouraged about their plans, Jyn repeats Cassian’s line. It’s a wonderful parallel, and the perfect summation of the entire film.

“I am one with the Force, and the Force is with me.” 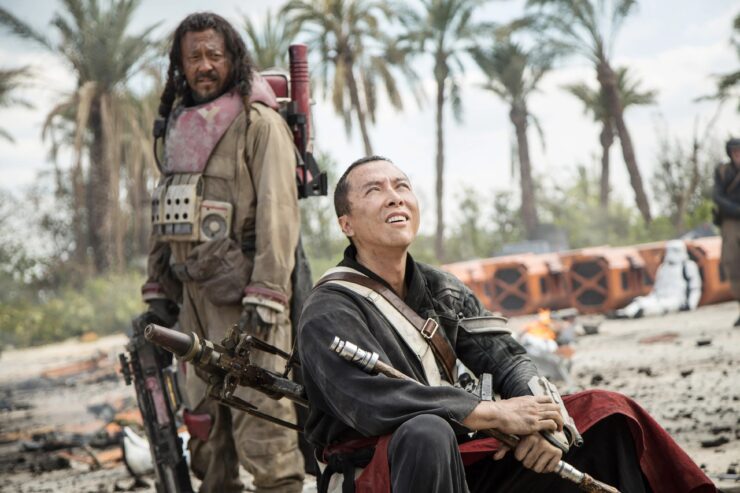 Chirrut Îmwe™ uses this phrase as a prayer. He appeals to the Force, asking for both its guidance and strength — and things seem to work out pretty well for him throughout the film. Meanwhile, Baze Malbus™, Chirrut’s lifelong companion, scoffs at Chirrut’s faith during the entirety of Rogue One. However, when Chirrut dies in a self-sacrificing move, Baze holds him and helps him pray until he’s gone. Then, in an incredibly emotional scene, Baze repeats Chirrut’s words over and over as he finishes Chirrut’s mission. Talk about a tearjerker. 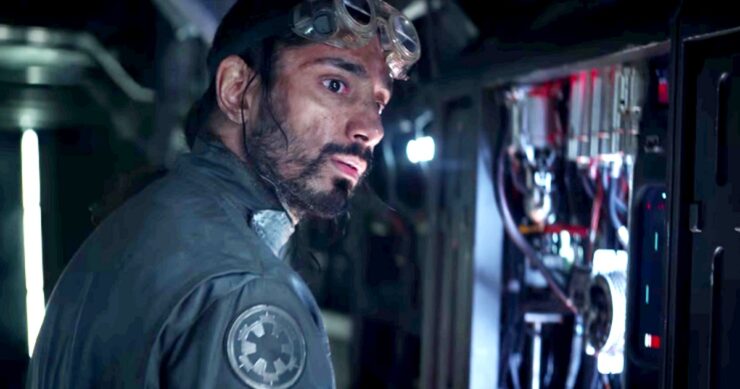 Of course we had to include the title drop. On Scarif™, Bodhi Rook™ and Jyn Erso are attempting to commandeer a stolen craft. An Imperial officer demands their call sign. In a moment of crisis, Bodhi flounders. Jyn encourages him to simply say anything. And thus Bodhi names his team “Rogue One.” It’s the perfect name for a team of rebellious misfits. Even more befitting is that the defected Imperial pilot came up with it after going rogue.

“Be careful not to choke on your aspirations, Director.” 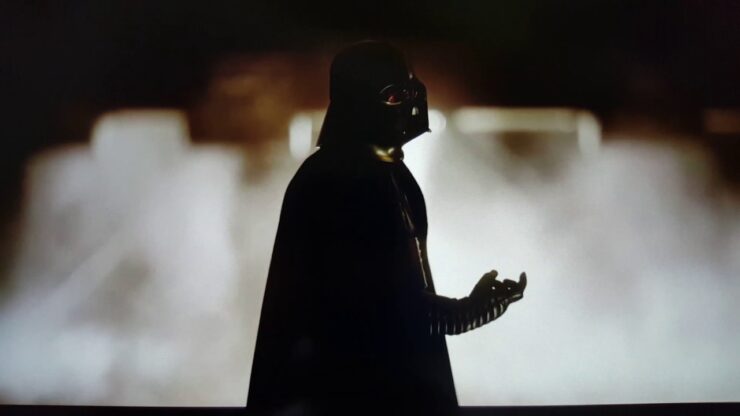 This is by far one of the funniest Darth Vader™ quotes of all time. When Director Orson Krennic™ throws a tantrum on Mustafar™, the Sith Lord™ is quick to check the man’s ego. Darth Vader uses the dark side of the Force to literally choke Krennic. Then, he tells him not to “choke” on his ambitions, because Krennic is so insistent he receive commendations for creating the Death Star™. Vader’s pun is both hilarious and hair-raising. 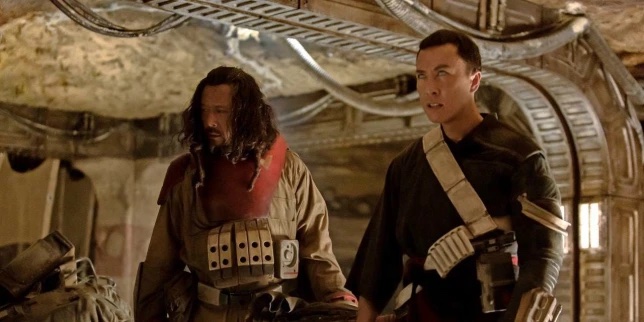 From the moment these characters are introduced, we know they care for each other deeply. Once Jedi Temple Guardians, Baze Malbus and Chirrut Îmwe now wander the streets. Baze has lost his trust in the Force. Chirrut’s belief is steadfast.

In their introductory scene, Chirrut claims the Force saved him from a stormtrooper™ battalion, while Baze grumbles that it was his intervention which kept Chirrut safe. Similarly, during a dangerous assassination/intel operation, Chirrut follows Cassian onto a dark, stormy planet. Baze is clearly worried. But he also refuses to tag along … until, that is, he wishes Chirrut good luck and Chirrut replies with the above quote. 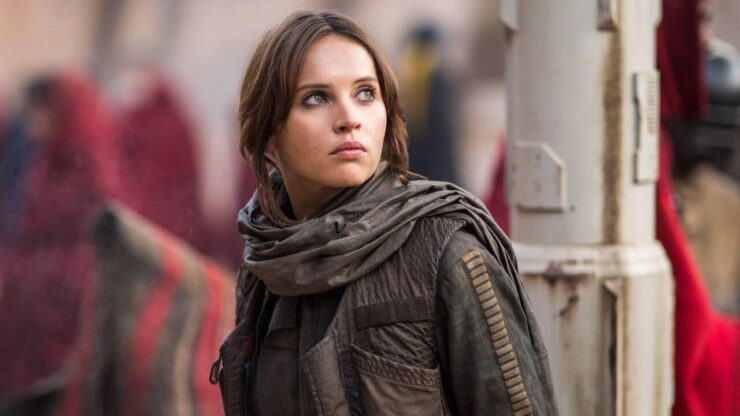 Jyn Erso has a reputation as a bit of a troublemaker. In her youth, she associated with the radical Saw Gerrera™. In her adulthood, she’s imprisoned for crimes against the Empire. So when she’s recruited by the Rebellion, some higher ups have their doubts about her behavior. Jyn, sharp and sassy as ever, has the best comeback in the galaxy. She proves in this moment that she’s the perfect person for the job. Plus, this quote is now a battle cry for real-life rebels everywhere. So its impact is outstanding. Thank you, Jyn Erso! 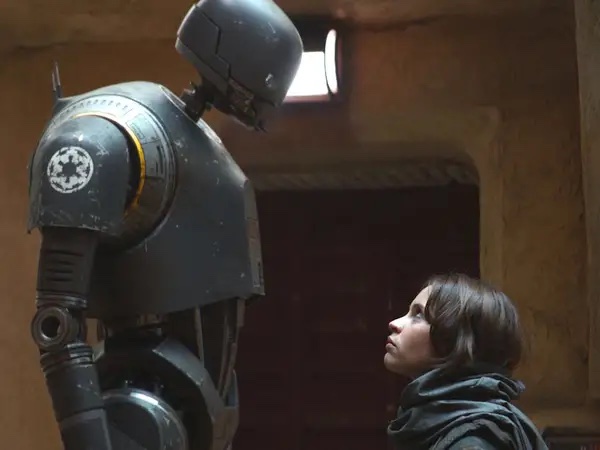 K-2SO™ is the funniest Star Wars droid and his relationship with Jyn Erso is even funnier. The two characters simply don’t trust or like one another for a majority of the movie. Despite being a reprogrammed KX Enforcer Droid™ himself, K-2 can’t find it in his programming to let Jyn in. So when he tells her he’ll be there for her, the audience gets super emotional — only for it to be immediately overshadowed by a truly side-splitting remark, which is that K-2’s loyalty is contingent on Cassian’s orders.

“You’re not the only one who lost everything. Some of us just decided to do something about it.” 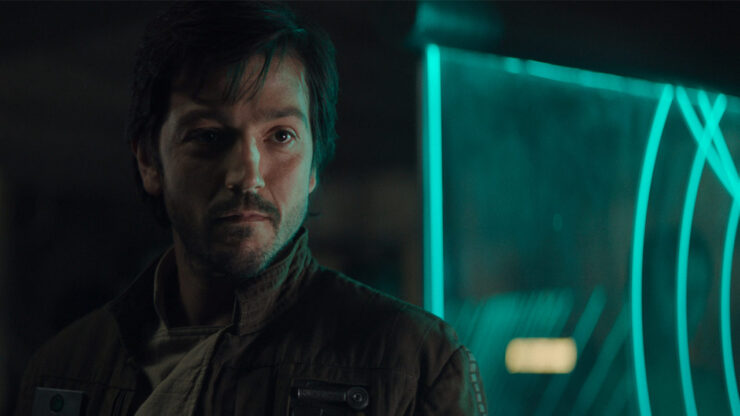 Cassian Andor is a fascinating character. We see him murder, spy, and steal in the name of the Rebellion. And he’s clearly scarred by his actions as well as his past. He also has no patience for Jyn Erso’s moral neutrality. Calling her out for having the luxury of keeping out of the conflict, he explains that he’s been in this fight since he was a child. Cassian has witnessed everything he loves perish under the Empire. He won’t let it happen just to stay comfortable. So he’s going to fight back. 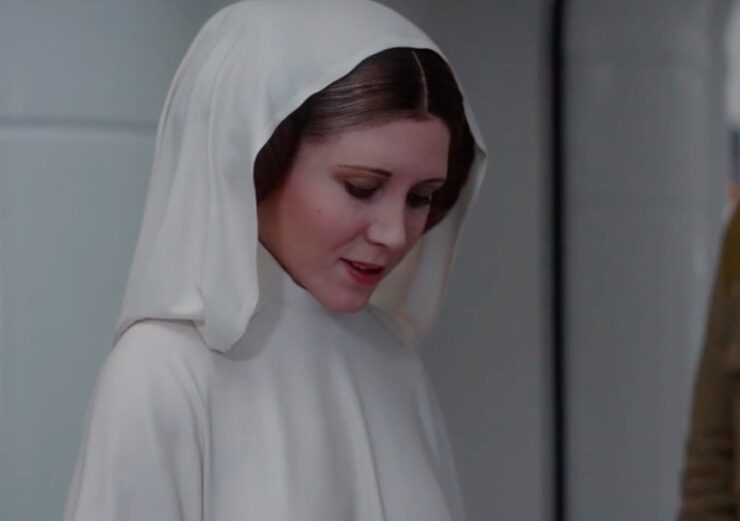 The coolest thing about Rogue One is that it ties directly into Star Wars Episode IV: A New Hope™. Seriously, it ends just minutes before A New Hope begins. These few crossover moments are an absolute thrill. The film’s ending shows desperate pilots delivering the Death Star plans to Princess Leia Organa™. And when the runner inquires what the Rebels have sent, Leia repeats the film’s motif: hope. We get chills thinking about it even now, six years later.

“The strongest stars have hearts of kyber.” 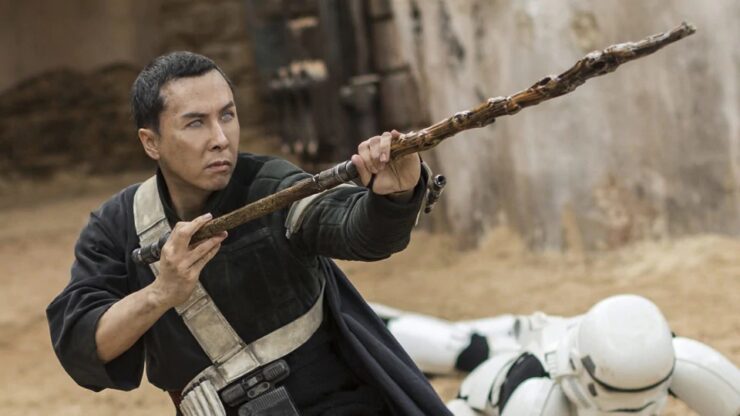 In case you aren’t aware, lightsabers are forged with kyber crystals™. Thus the “heart” of a lightsaber is this mystic gem. When Chirrut says this to Jyn, he’s paying her an incredible compliment. Essentially he’s comparing her to the strongest weapon in existence, one that requires incredible physical and mental strength. This additionally ties into Galen Erso’s™ nickname for his daughter, which is “Stardust.” Thus Jyn is inextricably linked to the galaxy, a bright and powerful spot amid the darkness.

What are your favorite quotes from Rogue One? Join other Star Wars fans in side.show/geekgroup, and don’t forget to Let Your Geek Sideshow!