While most people might not recognize the word coulrophobia (fear of clowns), almost everyone can recognize the terror it brings.

There is something hidden behind the mask of bright painted colors and smiles that split faces from ear to ear. If you unzip the hideous smile, and tear away at the rotting fleshy paint, you will find a beast mocking you. Every clown has a secret beneath all that unhinged laughter, be it tricks of spewing flowers or spewing fire.

Over the years, fans have come to love a variety of creepy clowns. So let’s meet a few of the most sinister clowns around, all of which you can bring home (if you’re brave enough) for your horror collectibles display! 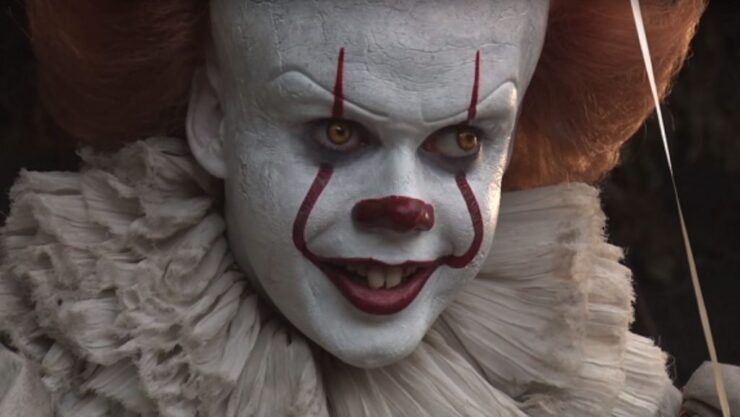 Pennywise is certainly one of the most terrifying clowns of all. In fact, it’s not really a clown at all. It’s an ancient cosmic evil that simply chooses to take the form of a clown. Its true form is an incomprehensible collection of lights and orbs, though its most realistic corporeal form is akin to that of a giant spider.

And yet, being the shapeshifter and beast that it is, IT chooses to be something even more terrifying than giant spiders or beasts of the dark: Pennywise the Dancing Clown. It knows that there is something beyond unsettling about a clown with a bloated head, eyes that can’t be met, and a blood red smile. Even if Pennywise only appears in Derry, Maine, ever 27 years, IT sure makes an impact every time. 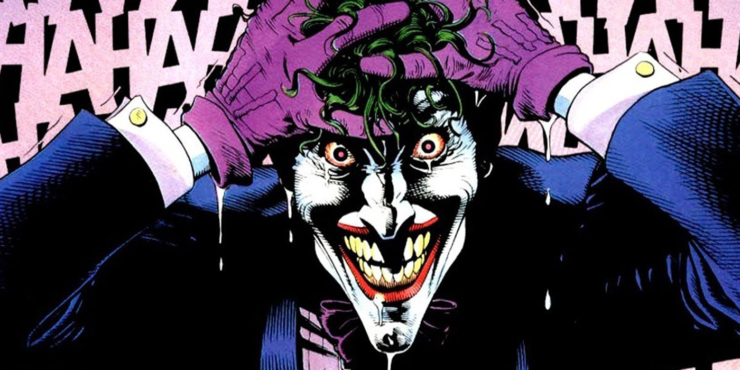 The Jester of Genocide, the Harlequin of Hate. The Joker is more than just a character. It’s his entire being! Unlike many other villains of Gotham, The Joker does not have an alter ego, or even a single definitive backstory. It seems that there have been multiple origins through the years, and multiple reasons why he fell into the “line of work” that he did after he pursued a career of comedy. No matter the beginning, every Batman story eventually finds a punchline centered around The Joker. 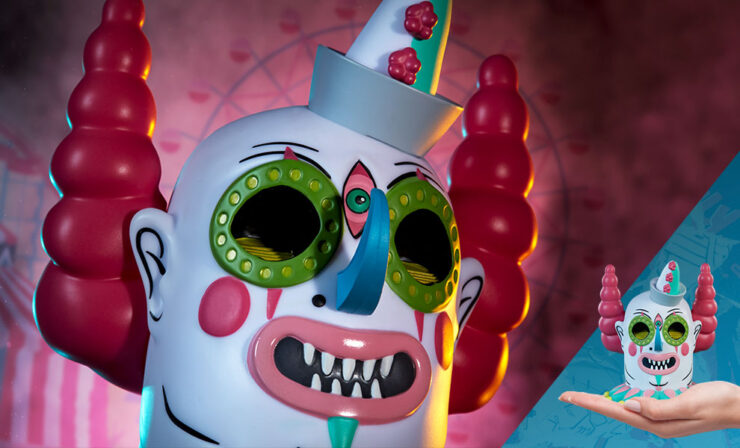 Look deep into the cavernous carnival eyes of the Stairway to Hell…o Designer Toy Collectible by artist Pseudo5.

Here, in the overlap between our world and the alternate dimension of the Stairway to Hell…o, we find ourselves confronted once again with the most petrifying creature from our realm mixed with theirs. Every day is a psychedelic nightmare, and this clown’s sharpened teeth are ready to devour those nightmares straight from your soul.

You can purchase the Stairway to Hell…o Designer Collectible Toy from Unruly Industries™ right now, if you’re ready to send in the clowns! 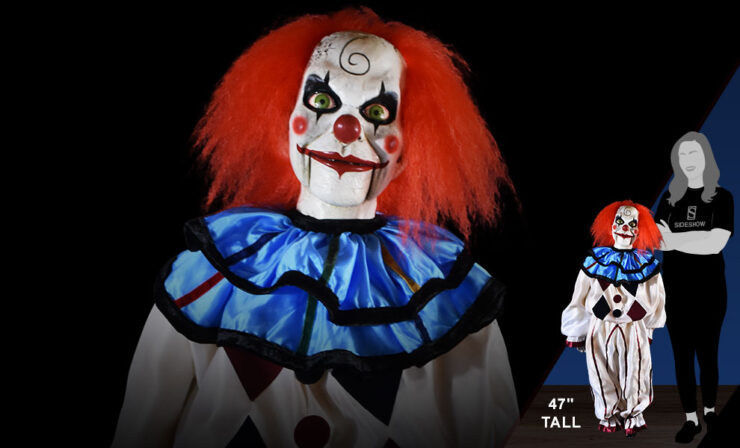 Perhaps this clown will tickle your fancy, since it’s not just a clown, it’s also a doll! The Mary Shaw Clown is from the movie Dead Silence. Mary Shaw was an extremely popular ventriloquist from the 19th century. Her dying wish was to be made to look like one of her dolls.

Little did they know that Mary Shaw had learned to speak through her ventriloquist dolls, and she even tied her soul to the dolls she used. As a result, Mary would never truly die. And perhaps she’s still alive in the Mary Shaw Clown prop doll right before you. Only one way to find out. 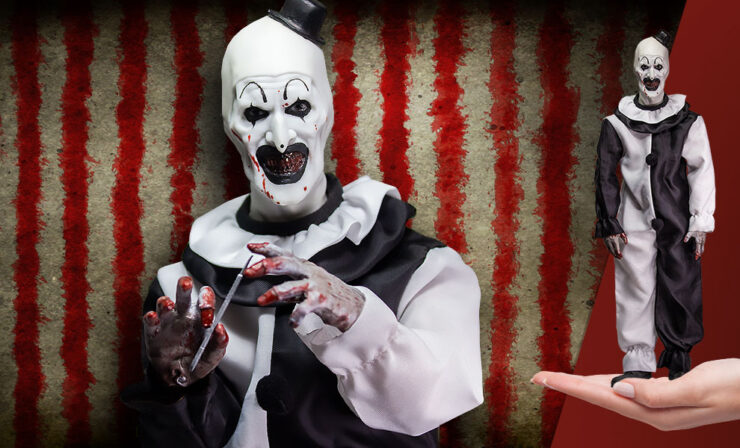 Who’s black and white with red splattered all over? Oh, that’s right, Art the Clown! For this not-so-funny jester, a night without death isn’t a night to be enjoyed at all. Art the Clown makes a spectacle of instilling pure horror into his victims. He stalks, he maims, and he most certainly kills.

Some evils cannot be saved, even by misguided compassion. Their only purpose is fulfilling an endless hunger to inflict terror — and there’s not a clown around who shows this better than Art. You can catch his latest gags in Terrifier 2, premiering October 6, 2022. 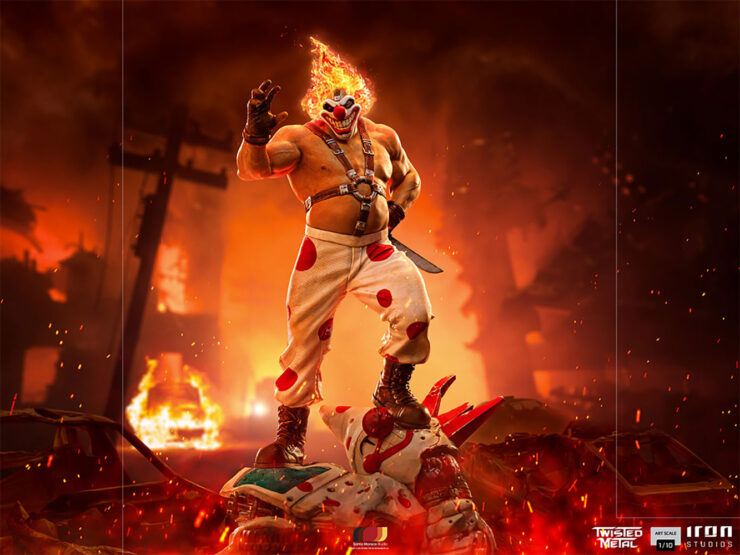 I scream, you scream, we all scream for death and destruction at the hands of a deranged psycho clown driver! Sorry … is that not how it goes? Well, never mind, because Marcus “Needles” Kane and his Sweet Tooth truck stop for no one. The only road rules are deliver a flaming serving of demolition.

From the harness to the polka dot pants, not to mention his signature flaming hair, Sweet Tooth is happy to satisfy your cravings — as long as they involve utter, unabashed chaos.

Share your thoughts (and maybe a joke or two) with other horror fans over at side.show/geekgroup, and don’t forget to Let Your Geek Sideshow!