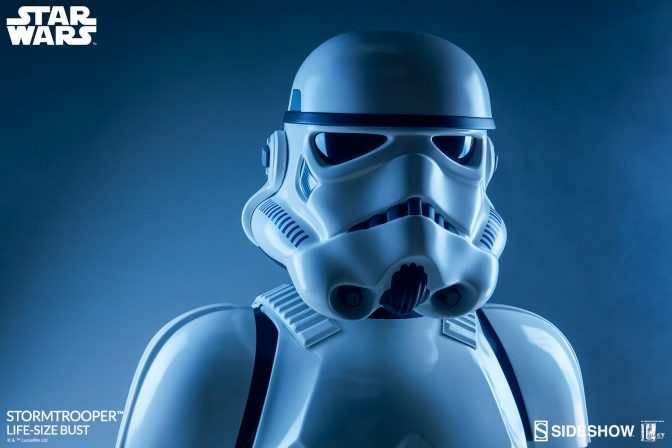 The Star Wars™ galaxy is vast and varied — but that hasn’t stopped the Empire from trying to unite every planet under one rigid rulership. Many of the inhabitants of these worlds have experienced the galactic conflict in some form or another. Whether or not they’ve seen active combat, most humans and aliens have likely encountered one of the Empire’s loyal foot-soldiers — stormtroopers™.

Star Wars stormtroopers come in many types and sub-categories, each uniquely suited for their type of world. From guarding coastal regions to traversing snowy climates, these Imperial units execute the Emperor’s plans as best as they can. That is, of course, until some plucky Rebels or Resistance members stand in their way.

If you’re building an army of Star Wars collectibles, why not recruit these troopers for your shelf? Sideshow.com features more stormtrooper types than can fit in a single trilogy! Ready to ship out for their next mission immediately, all they need is a commander like you calling the shots. 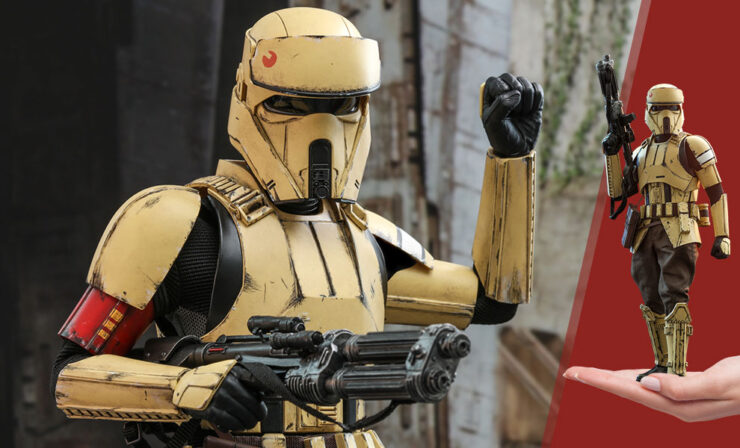 Shore up your defenses!

From the beaches of Scarif™ to the mining facilities on Morak™, the Shoretrooper™ Sixth Scale Figure is ready for action! They work in service to the Empire with their unique sand-colored armor, equipped with a blaster rifle for combat.

This articulated collectible figure has detailed armor pieces with careful weathering and distress to reflect the trials of combat, finished with the signature stripes and markings that denote their rank. A tailored fabric undersuit allows for posing, and fans will note that the lack of upper leg armor gives these shoretroopers more mobility in their varied tropical mission environments. 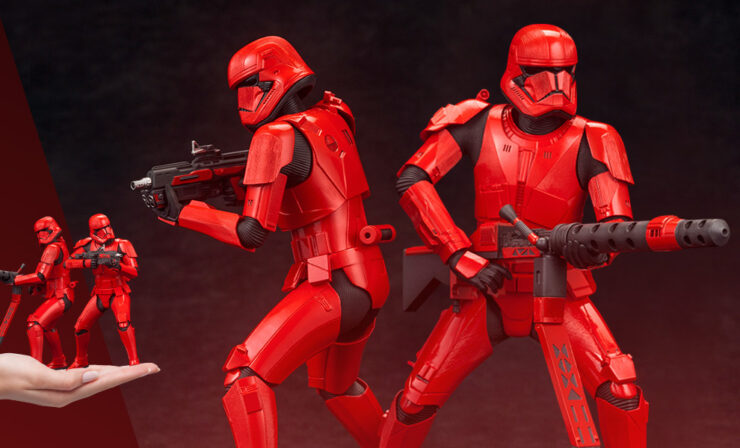 Always two, there are.

Every generation of Imperial armor is memorable, but the Sith Troopers™ might be the boldest of the bunch. Formed in the era of the New Republic, these crimson soldiers draw inspiration from the dark legacy of the Sith™ throughout the galaxy.

This two-pack of ARTFX Sith Trooper Statues from Kotobukiya includes a blaster rifle and a mega blaster for display. Every angle of each figure is expertly detailed with the unique and updated First Order armor design. The striking red and black coloration will stand out among any squadron of stormtroopers on your shelf. 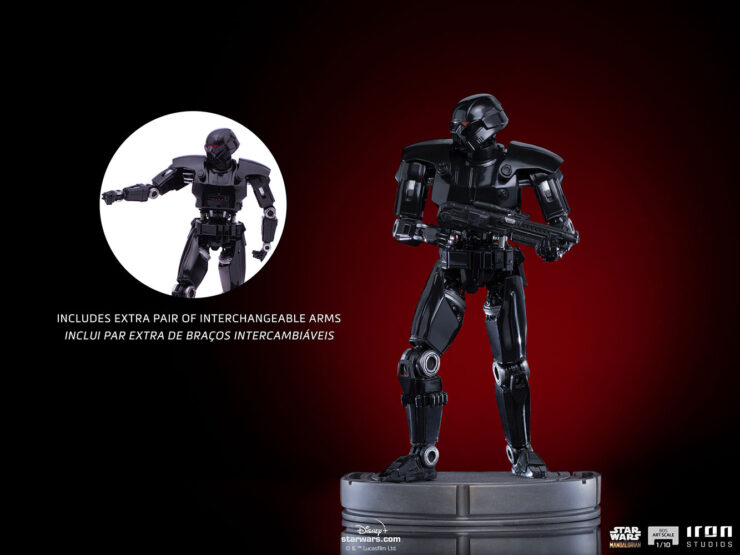 No room for human error.

The latest generation of Dark Troopers™ evolves the idea of a trooper in armor into a fully mechanical combat droid in the service of the remnants of the Empire. The result is a ruthless, relentless opponent to anyone who does not fall in line with Imperial orders.

The Iron Studios Dark Trooper 1:10 Scale Statue meticulously recreates the droid’s signature construction. Its arms and legs are accented with rounded silver joints that allow you to see through the mechanism, proving there is no human inside the armor. The Dark Trooper has sleek black armor and piercing red eyes, and includes swap-out arms for an added display option. Fans won’t want to miss adding this hand-painted, limited edition piece to their army.

On the Empire’s payroll.

Above all else, trooper helmets are the most iconic and distinguishing feature of any Imperial agent. It signifies status, assignment, and most importantly, looks extremely cool. The Death Trooper’s design especially ups the intimidation factor and maintains an air of mystery.

New Zealand Mint’s Death Trooper 1 oz. Silver Coin is a genuine precious metal recreation of the sleek black helmet, and it’s also technically legal tender! This stylish Star Wars coin features differing colors to evoke the shine and shape of the Death Trooper portrait, with a silver backside confirming the authenticity of the 999 Fine Silver coin. It comes in a collector’s box with a viewing window, and is limited to an edition of 10,000 throughout the galaxy. 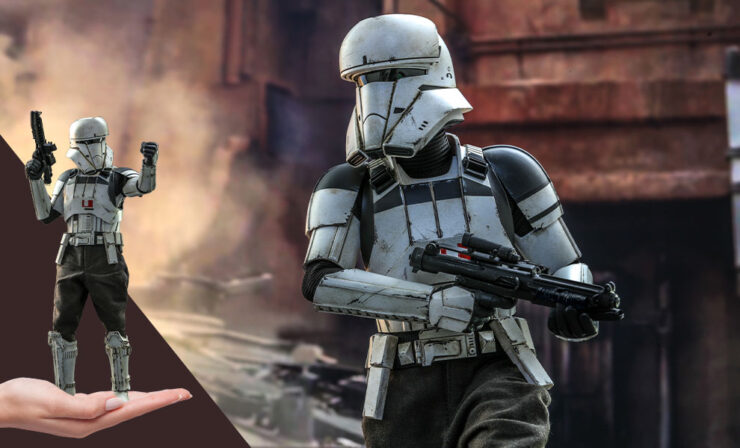 Every squadron needs a leader.

Not every trooper has what it takes to lead. While the position might come with upgraded accents on the armor, it also comes with a lot of responsibility. Each and every soldier under a squad commander’s lead is trusting them to carry out the mission safely.

The Assault Tank Commander was first introduced in Rogue One: A Star Wars Story as an enemy to the likes of Cassian Andor™, Jyn Erso™, and the early days of the Rebellion. These troopers direct their subordinates to pilot their vehicles into battle while updating them about changing combat conditions. The articulated Assault Tank Commander Sixth Scale Figure by Hot Toys includes a fabric undersuit, sculpted and weathered armor, the distinct helmet style, and a blaster rifle for dynamic battle poses. 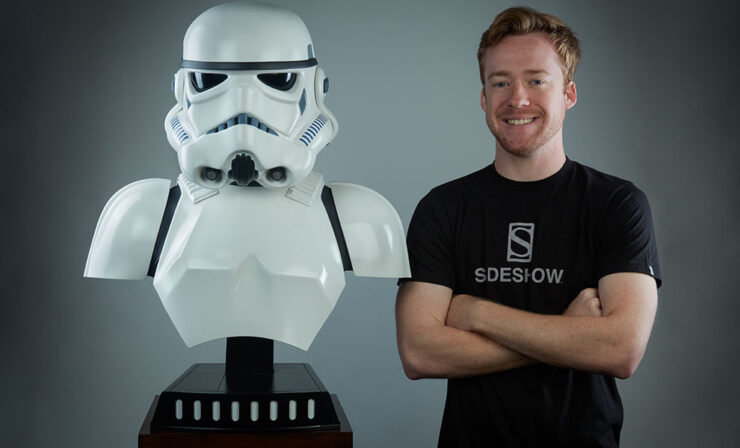 More bang for your bucket.

Scare the neighbors, put the kids in line, or just build your own personal army with this life-size Stormtrooper Bust by Sideshow! Before all the variations and evolutions of the armor, there was the classic white armor design, dedicated to the service of Darth Vader™. Sure, our heroes have outwitted stormtroopers before, but there’s always strength in numbers.

Measuring 27″ tall, this 1:1 scale Star Wars collectible makes an unforgettable addition to any fan’s life — with realistic details and a sleek display base, you’re sure not to miss this target wherever it is displayed! The Stormtrooper Life-Size Bust was created in partnership with Legacy Effects, ensuring high fidelity to the iconic design known throughout the galaxy.

Whether you’re a Star Wars helmet historian or need enemy soldiers for your heroes to stand up against, Sideshow.com has you covered! Shop these stormtrooper figures and more from our extensive collection of ready to ship collectibles. If that’s not enough, be sure to browse all Star Wars collectibles to make your home display strong with the Force.