The Court of the Dead is a rich dark fantasy and horror world. Full of mysteries, betrayal, and ambition, the story heightens the drama of its genre with the inclusion of two vital essences.

One is etherea, or energy harvested from mortal souls when they die. First, Shieve the Pathfinder predicts where large bounties of etherea will be found. Then, the Alltaker’s reapers collect etherea in order to fuel the eternal war between Heaven and Hell. This is a thankless task which binds the Underworld to servitude. Finally, scavengers such as Poxxil the Scourge pick scraps from battlefields, constantly thirsting for this pure source of power.

The second essence is dreadsgrip. Insidious and infectious, it is a driving force of conflict in the Underworld. Below, learn of its terrible influence among the Court of the Dead characters who desperately battle its spread — as well as those who succumb to its evil.

Dreadsgrip exists within every mourner, soulborn or spiritborn. Depicted with a malevolent, bloody violet hue, it is a corrupting force that taints mourner’s minds. Dreadsgrip infects them with thoughts of power, destruction, greed, or malice. Their desires are warped into their downfall. Sometimes their bodies even become twisted or maimed as physical manifestations of their destruction.

Put simply, the dreadsgrip can take an altruistic intention and spoil it, twist it, maim it, until it becomes the most selfish act. It speaks to every individual differently, preying on their ideals and morals. And all it takes is one push in the wrong direction for an honorable deed to become a horrible one. The villain of the Court of the Dead: Grave Tales comic anthology is dreadsgrip. Its rapid rise and devastation of the Underworld is what the heroes of the story are sent to stop. Specifically, Kier and Exraile must end the rampage of a dreadsgrip-touched mourner named Ghetis Avancor.

Ghetis emerges from a womb-like chrysalis having been influenced by dark thoughts. Driven mad, he leads a group of mourners intent on dismantling the members of Death’s Court. In warping those mourners’ intentions, Ghetis gives the dreadsgrip control over far too much of the Underworld for comfort. And the dreadsgrip still blazes through the realm, burrowing into even the most unbreakable of minds… 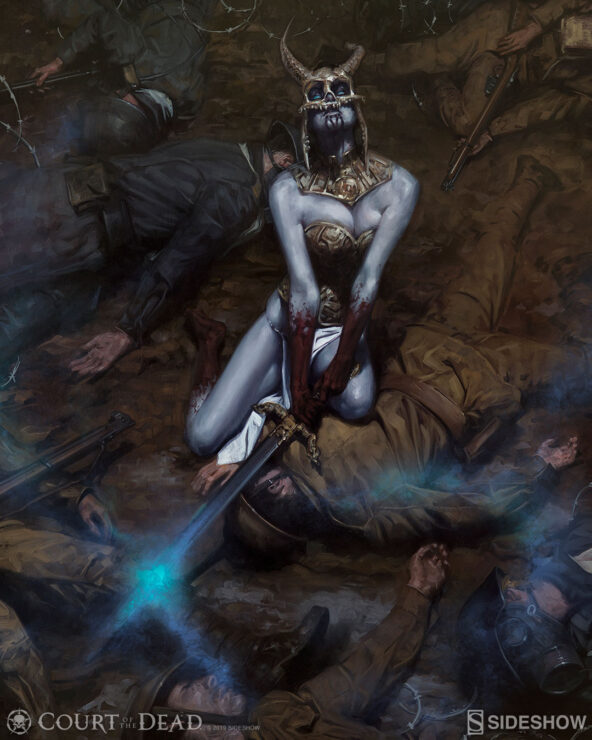 Kier is the Alltaker’s adopted daughter, his first sword, and the de facto leader of Spirit Faction. Cast out of Heaven for her imperfections, the passionate and purposeful valkyrie devotes her existence to the Alltaker’s cause as well as to her own vengeance against the twin sister that threw Kier from Heaven’s realm.

In Grave Tales, the dreadsgrip plays upon Kier’s insecurity. Because of her rage, Kier worries her inner self does not align well with the Spirit Faction. She fears she is inadequate in her mentor, Ellianastis’, all-seeing eyes. The dreadsgrip additionally berates Kier for the flaws that made her unworthy as an angel. However, Kier fights body and mind against this invasion into her heart and comes out seething — and swinging. 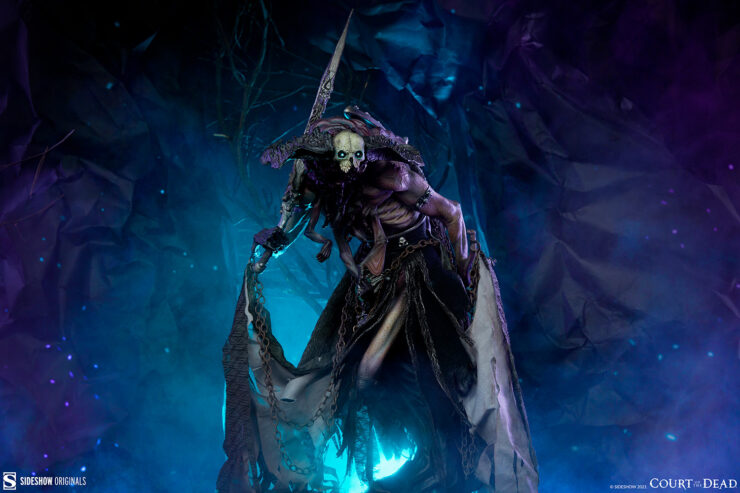 Oglavaeil was created by the Alltaker to uphold justice and maintain balance in the Court of the Dead. Serving as both guardian of the Underworld and as Court executioner has taken a physical and mental toll on Oglavaeil. More than many other mourners, he is aware of how close the perverting, destructive nature of the dreadsgrip is to ruining him. His pale skin has even taken on its ghastly purple shade. Thus Oglavaeil guards his heart fiercely.

To counter the dreadsgrip threat, Oglavaeil also answers the call to join the Dreadsbane Inquisition. This new Underworld knighthood is dedicated to fighting the rakers that have fallen to serve the dreadsgrip. With every enemy he overcomes, however, Oglavaeil must keep the urge to destroy in check, lest he allow it to consume him. 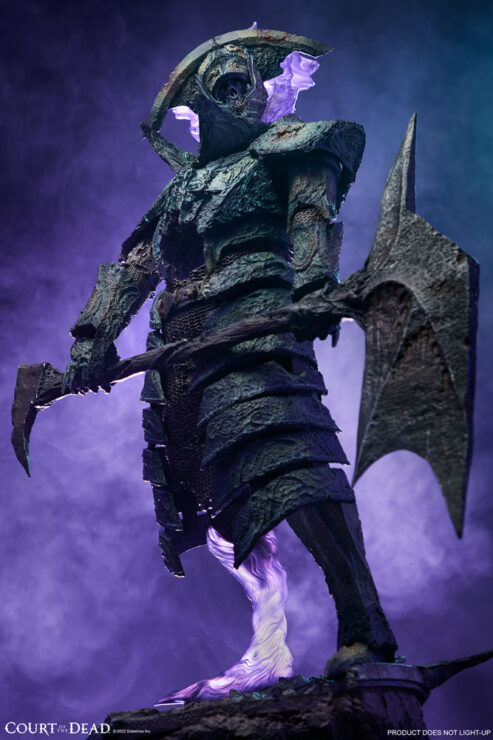 Mortis Knight Osseil was practical and precise. He treated his life as a mathematical equation, assessing and predicting, strategizing and solving. Everything had a right answer. Everything could be fixed with enough time and thinking. Thus, Osseil set out to save the entire Underworld by solving a single, impossible equation.

Overwhelmed by that impossibility, Osseil hears the dreadsgrip whisper to him. It offers a simple solution: sacrifice. In accepting its deceit, Osseil betrays the knighthood as well as his faction. He becomes the Oathbreaker Strÿfe, a fallen knight whose darker nature now urges him toward the desecration of the realm he once protected.

Which well-intentioned thoughts do you have that the dreadsgrip may seek to warp? Do you think you would become an enemy of the Alltaker? Let us know in the comments, and don’t forget to Let Your Geek Sideshow!

The Court of the Dead: Current Books and Graphic Novels