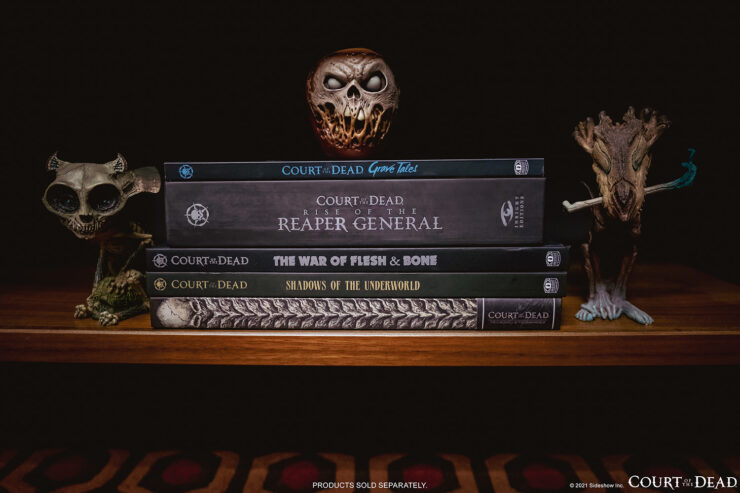 Below, get all the information about which books we offer. Plus, find details on who these books are about, and where the stories fit into the grand scheme of the Underworld.

Chronicle of the Underworld 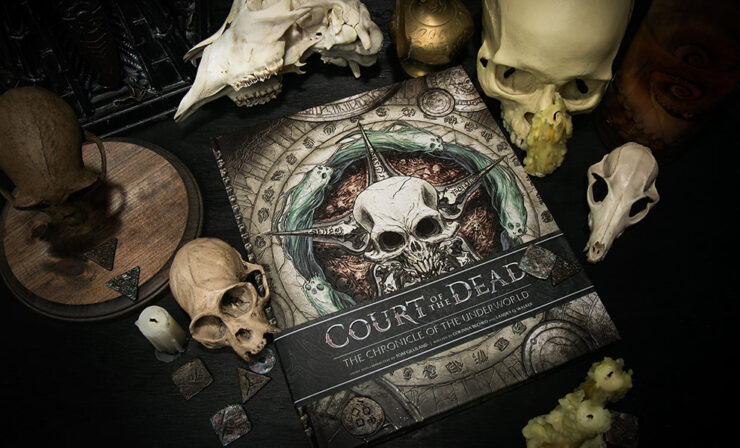 Whether you’re a long time fan looking for more resources or you’re just getting into the Court of the Dead, this is the book for you. The Chronicle of the Underworld is a guidebook for all mourners. In it, gorgeous illustrations show you maps, characters, history, and culture. You learn about the most important characters as well as the three factions: Spirit, Flesh, and Bone.

Your narrator Malavestros will also explain the inception of the Underworld, as well as how it ties in to the war between Heaven and Hell. But the Chronicle is far from a serious history lesson. Get ready for plenty of witty jests and jeers as you are welcomed into this brand new world. 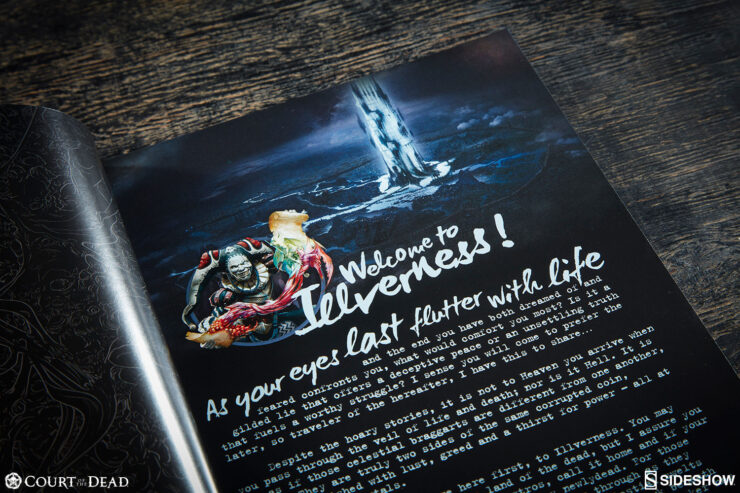 The Grave Tales anthology features nine comics that can be read either as standalone or as a continuous story. This visually stunning collection features origin stories as well as character-defining moments for some of the most important players in the Court of the Dead.

Learn how Gallevarbe became Death’s Siren. Feel Kier’s rage as she is deemed unworthy of grace. Watch Xiall purge herself of weakness, and listen as Malavestros tethers all these tales together. Additionally, get behind the scenes and “making of” content to satisfy the desire for even more fantasy artwork on your bookshelf.

Shadows of the Underworld 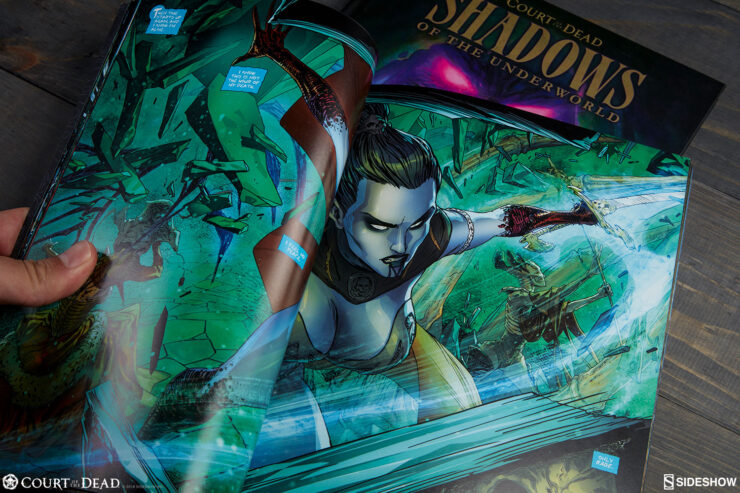 Shadows of the Underworld takes you on a journey through the twisted underbelly of the Land of the Dead, where the hunger for power stolen from mortal souls can create monsters to challenge even Death’s most stalwart warriors. Over one hundred pages of vibrant illustrations depict the looming threat of dreadsgrip as well as the courageous characters chosen to fight its insidious influence.

Rise of the Reaper General 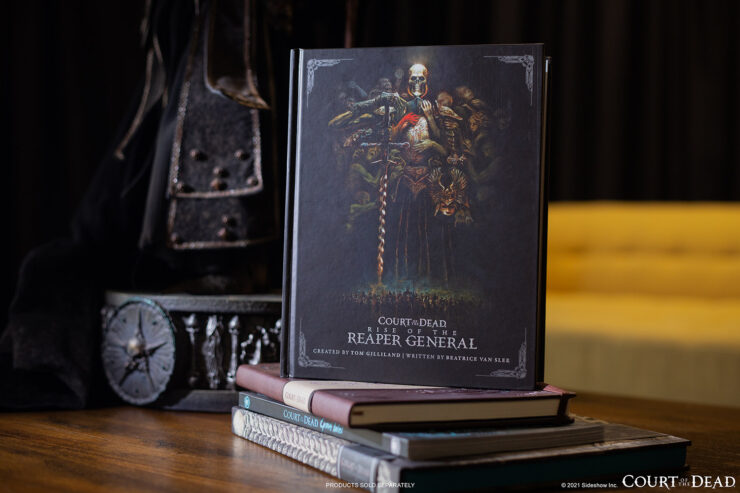 Immerse yourself in the depths of the Court of the Dead with over 400 pages of words and woe. In Rise of the Reaper General, you will accompany Mortis Knight Demithyle as he defends his realm from a terrifying threat: the bael reiver hordes. Alternately aided and thwarted by myriad otherworldly beings, Demithyle must navigate places of dark and eerie mysticism, of love and perilous wonder lain before him on his quest to reclaim his duty.

Illustrious ink drawings accompany each chapter to further flesh out this captivating piece of Demithyle’s life. It’s the perfect read for a gloomy day — you might want a flashlight once the sun sets, though. There’s no telling what horrors await you and the unsuspecting denizens of Illverness once night falls…

War of Flesh and Bone 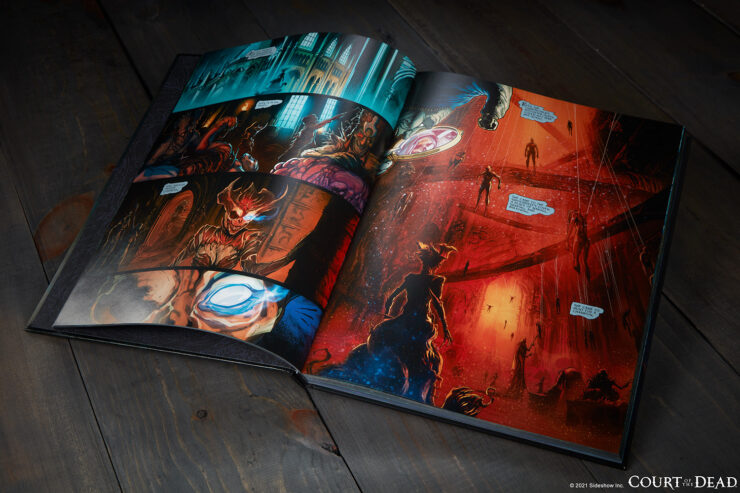 The most recent addition to the Court of the Dead visual universe, War of Flesh and Bone explores the personal and familial dynamics that can get in the way of the greater plan. The Flesh and Bone Faction leaders, Queen Gethsemoni and Xiall, are constantly at odds. Instead of using their strength against their common enemy, they wage battles between each other, using underlings as pawns in an impressive yet destructive bid for power.

Caught in this deadly game are the beings Odium and Mortighull. Witness Odium’s creation, Mortighull’s great discovery, and the inner workings — and inner turmoil — of the Court. With over one hundred full-color pages, this comic is not to be missed for those mourners seeking to discover the newest secrets about the Court of the Dead.

Have you read any of these Court of the Dead books? Which is your favorite? Let us know in the comments, and don’t forget to Let Your Geek Sideshow!

Court of the Dead: What's Dreadsgrip & Why is it Dangerous?