Holy entertainment, Batman! DC has a packed schedule of 2022 releases. There’s everything from animated series and live-action television to DC multiverse expanding movies to look forward to in the New Year.

But you don’t need the World’s Greatest Detective to find all the new releases. Below, we break down the air dates and the need-to-know info about all the 2022 DC projects. 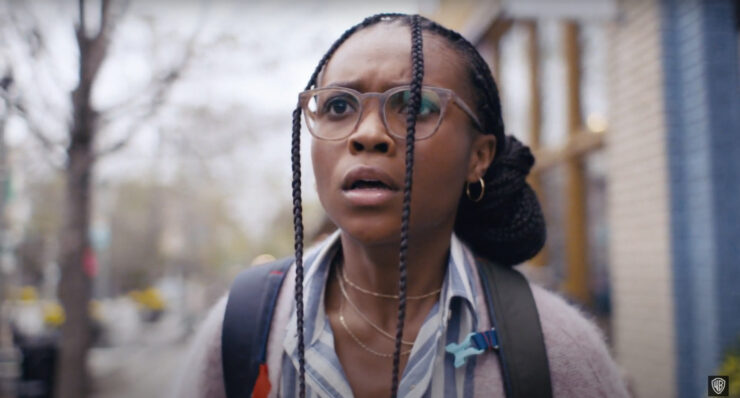 The first DC Comics TV project in 2022 is Naomi. Based on a comic book of the same name and spearheaded by executive producer Ava DuVernay, Naomi tells the story of Naomi McDuffie (Kaci Walfall), a super hero loving teen whose hometown is impacted by a supernatural disaster — and subsequently saved by Superman. This event rattles the citizens and awakens a new power, as well as new memories, inside Naomi. Catch the pilot episode on The CW in January. 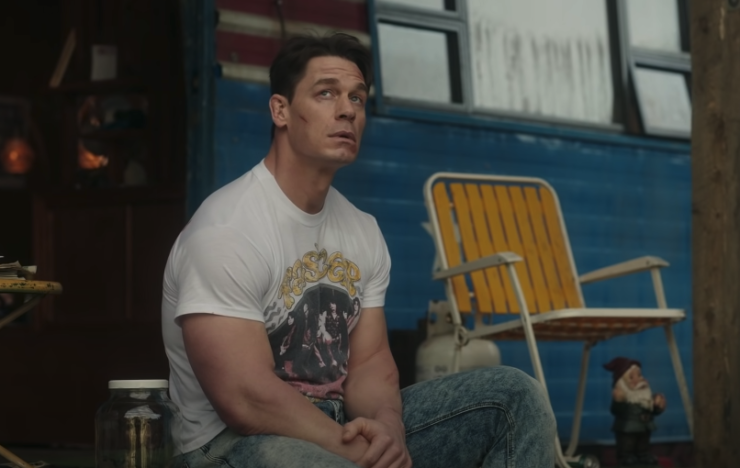 Peacemaker was first introduced in James Gunn’s action–comedy 2021 film The Suicide Squad. The series follows this morally questionable military man and a group of violent super-powered individuals that operate under the radar. Peacemaker stars John Cena as Peacemaker, Danielle Brooks as Adebayo, Freddie Stroma as Vigilante, Jennifer Holland as Harcourt, Steve Agee as Economos, Chukwudi Iwuji as Murn, and Robert Patrick as Auggie Smith. However, Eagley the bald eagle has stolen the HBO Max trailer spotlight and will likely be the fan favorite character on the show, too. 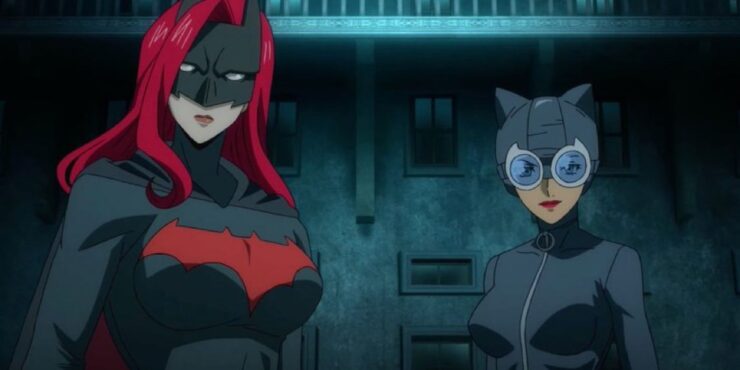 Catwoman: Hunted tells the tale of Selina Kyle’s (Elizabeth Gillies) latest heist. Putting her paws on a priceless jewel, however, draws the unwanted attention of Interpol, other Gotham City villains, and Batwoman (Stephanie Beatriz). This animated feature has a distinctive art style that sets it apart from other DC animated films, meaning it’s not to be missed. Catch Catwoman: Hunted on digital in February.

DC Comics fans are optimistic about this gritty, grounded, gruesome take on Batman’s (Robert Pattinson) early days in The Batman (directed by Matt Reeves). The latest DC Fandome event generated lots of attention and anticipation with a Batman trailer, which gave us even more glimpses into Gotham’s troubled billionaire orphan Bruce Wayne and his colorful city. Another trailer, titled “The Bat and The Cat,” has also been released.

Also appearing are Jeffrey Wright as Commissioner Gordon and Zoë Kravitz as Selina Kyle/Catwoman. Paul Dano chills as the mind-game-playing Batman villain The Riddler. Finally, an unrecognizable Colin Farrell as The Penguin rounds out the cast of characters that Batman must face in his perilous pursuit of justice. 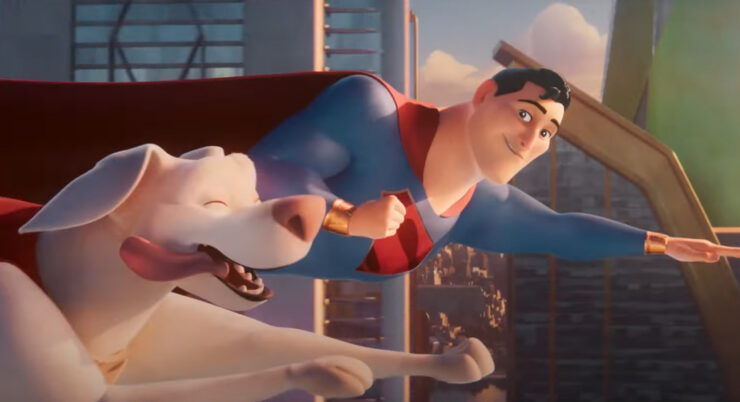 According to Warner Bros., “the DC Super Pets are ready to sit, stay, save the world”. The animated DC League of Super-Pets will be unleashed in theaters May 2022 with Dwayne Johnson starring as the voice of Krypto, Superman’s inseparable canine pal. Krypto, Ace the Bat Hound (Kevin Hart), and a shelter pack of extraordinary animals will rescue Clark and the other Justice League members when they are kidnapped. 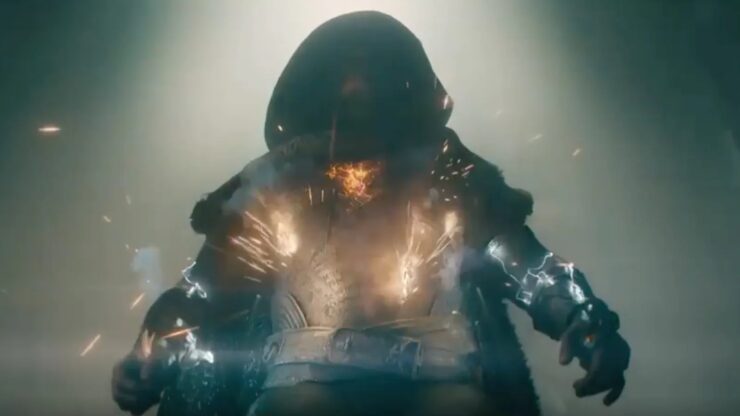 Black Adam’s plot is unknown, but the first trailer shows a group of explorers accidentally getting his attention — as well as the fate of a misguided soldier who think it’s a good idea to shoot a man who possesses the power of the gods. 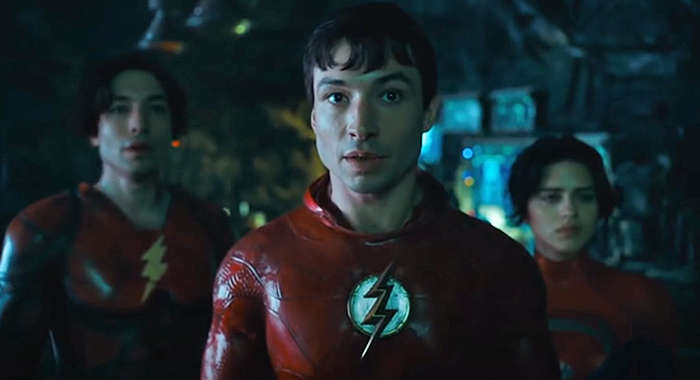 In the lead for the most shocking DC trailer to debut in 2021, The Flash (directed by Andy Muschietti) runs into theaters this fall. Starring Ezra Miller, it shows Barry Allen’s struggle between normal life and the path of a super hero, having already saving the entire world.

And hey, see another Flash and an unfamiliar Supergirl (Sasha Calle) at Barry’s side in the picture above? There’s also some multiverse shenanigans afoot because of The Flash’s decision to cause the Flashpoint, a timeline altering event that leaves his world out of order in the most fascinating way possible. Also joining the cast are Ben Affleck as Batman … and Michael Keaton as Batman. Whatever DC era you’re a fan of, this film’s got you covered.

Aquaman and the Lost Kingdom 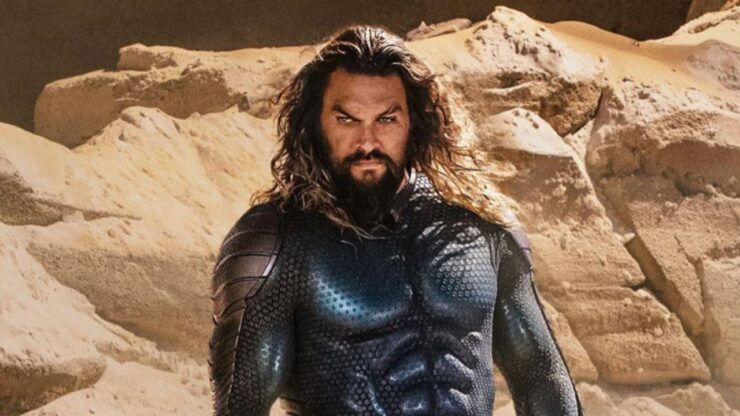 Jason Momoa made waves as the DCEU Aquaman, and now he’s back as Arthur Curry in Aquaman and The Lost Kingdom (directed by James Wan). No plot details are available at this time. Based on the cast members, though, it’s safe to assume a few things. Chiefly, Black Manta (Yahya Abdul Mateen II) is poised as the main villain. Arthur’s half-brother and deposed King of Atlantis, Orm Marius (Patrick Wilson) has been imprisoned but not forgotten.

Aquaman rules under the sea, but who wants to take that trident? And how dangerous are his fans — like obsessive marine biologist Dr. Stephen Shin (Randall Park) on land? Arthur will likely deal with threats from both halves of his heritage in DC’s Aquaman and The Lost Kingdom. 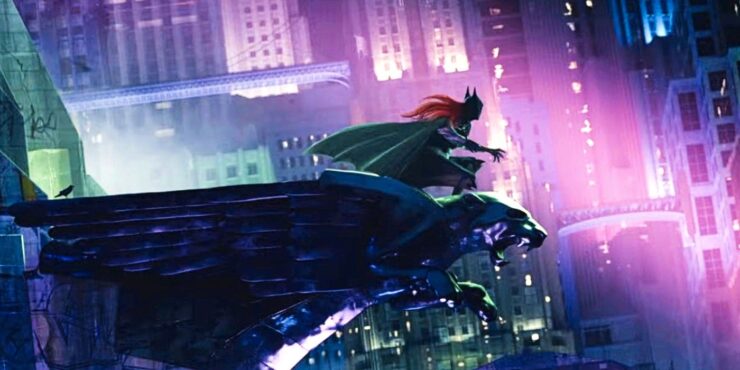 Batgirl (directed by Adil El Arbi and Bilall Fallah) stars Leslie Grace as Barbara Gordon, another of Gotham’s most famous caped crusaders. The only two confirmed cast members besides Grace herself are Brendan Fraser as Garfield Lynns AKA Firefly — a pyrotechnic supervillain — and J.K. Simmons as Commissioner Gordon — Barbara’s father and head of Gotham PD.

Besides the concept art shown above, we don’t know much about this film. We don’t know how Batgirl will be connected to the larger DCEU, or if other established Wayne family members like Robin or Nightwing will join Barbara. Hopefully more information, including a release date, is shared soon.

Harley Quinn is getting a little impatient, but as she points out in this cheeky teaser, “animation takes forever!” But don’t let that bring your hopes down. Harley (Haley Cuoco) and King Shark (Ron Funches) adamantly hype up Harley Quinn season 3, which is definitely happening in 2022.

The sizzle reel footage shows Harley and Poison Ivy (Lake Bell) starting their “Eat, Bang, Kill” tour as a happy couple. Other friends and foes abound in vibrant lineart. But don’t worthy, it’ll all be smooth as a Kite(man) in the new year.

Neil Gaiman fans have been dreaming about this day for a long time. The 11-episode Netflix series The Sandman tells the story of The Lord of Dreams’ (Tom Sturridge) capture and imprisonment … and that’s only the beginning. His family will also appear, the beings whom mortals call The Endless. Heroes will rise and fall while Death (Kirby Howell-Baptiste) claims souls and Dream battles demons — literally and figuratively.

The enormous and enormously talented Sandman ensemble includes David Thewlis as super-villain John Dee, Mason Alexander Park as Desire, Jenna Coleman as Johanna Constantine, Patton Oswalt as Matthew the Raven, Boyd Holbrook as The Corinthian, Gwendoline Christie as Lucifer Morningstar, and many more. We can expect a streaming date to be announced early or mid 2022.

Which upcoming DC project(s) are you most excited to see? Let us know in the comments, and don’t forget to Let Your Geek Sideshow!