The Batman, directed by Matt Reeves (Planet of the Apes), is a highly anticipated DC film release. With recent successes such as James Gunn’s The Suicide Squad and Zack Snyder’s Justice League, DC Comics fans are optimistic about this gritty, grounded, and gruesome take on Batman‘s early days.

Now in post-production and anticipated to release in 2022, The Batman stars Robert Pattinson (Tenet, The Lighthouse, Harry Potter) as Gotham City’s billionaire orphan Bruce Wayne and vigilante detective Batman. Also featured are Jeffrey Wright (Marvel‘s What If…?) as Commissioner Gordon and Zoë Kravitz (Mad Max: Fury Road, Spider-Man: Into The Spider-Verse) as Selina Kyle/Catwoman. Paul Dano (Prisoners, Okja) chills as the mind-game-playing Batman villain, The Riddler. Finally, an unrecognizable Colin Farrell (Fantastic Beasts and Where To Find Them) as The Penguin rounds out the cast of colorful characters who Batman must face in his perilous pursuit of justice.

The official synopsis of The Batman was released last year, along with a first look teaser. Now, during this weekend’s DC FanDome, fans got their first official look at the movie’s main trailer. Check out the new The Batman trailer right here, and then read on for a detailed breakdown of the Easter eggs and significant scenes hidden throughout.


Batman and The Riddler

Just like the first teaser, this new clip sets an unsettling scene by starting the viewer with the villain, not the hero. The main trailer for The Batman begins with GCPD swarming a diner during a nighttime rainstorm. A man who appears to be Edward Nashton — not yet using the “Nygma” alias — puts his hands up and comes quietly, but an ominous instrumental score and slow-crawl camera work reveals The Riddler’s infamous question mark symbol in Edward’s abandoned coffee cup.

“Something in the Way” by Nirvana plays as we cut to Commissioner Gordon lighting the Bat-Signal. We also get another closer look at Bruce’s all-black Batsuit and cowl. In a suspenseful voice over, Batman explains, “Fear is a tool. And when that light hits the sky … it’s not just a call. It’s a warning.”

Next we move to a subway car with familiar faces: the clownish, maybe even Joker-ish masked and made-up goons from the teaser trailer. Appearing to range from young teens to adult men, these supposed criminals stand in the station ready to fight their city’s Dark Knight. Batman, looking a little more unhinged than we’re used to seeing on screen, shows no mercy as he throws punches, knees, and kicks. When one antagonist fires a pistol point-blank at the suit, it bounces off with bright orange sparks, showing us that Batman’s suit is bulletproof. Batman then electrocutes the guy using his built-in wrist guard. So the Batsuit definitely has some high-tech, semi-lethal upgrades in this film.

We follow Batman to prison next, where he meets with someone we’re going to assume is The Riddler at this point — although his face is cleverly hidden or obscured throughout the clip. Safe on the other side of the glass, Riddler calmly taunts Batman about his actions. Batman, breathing heavily and thus already losing his cool from the get-go, punches the barrier and shouts at his enemy. This is clearly Batman at a breaking point.

“This is a powder keg,” Commissioner Jim Gordon says, “and Riddler’s the match.” Although it’s confirmed there will be at least three classic DC Comics villains in this movie, The Riddler and Batman’s cat-and-mouse game will take center stage as the main conflict.

This Bruce Wayne is pale, with long hair and an ill-fitting suit. Truly, Bruce Wayne is Batman’s alter ego, Batman’s mask. But what happens when Batman begins to blur the lines between his two personas, and eventually neglects his public face to further his crime-fighting agenda? It’s very likely we’ll see that internal conflict in The Batman. But for now we have to wonder what Bruce is doing in front of all these cameras at the courthouse. Is this about Joe Chill, the mugger who killed Martha and Thomas Wayne?

Whatever we initially suspect, we’re quick to change our minds when out steps the incredible Selina Kyle. She’s wearing knee-high, lace-up black heeled boots, classic Catwoman attire. And it is obvious Bruce is looking at her. Is this their first meeting? Or is there already some history?

Next we get a Selina scene, led by her insistence to Batman that she can take of herself. With her unmasked and Batman still hidden in his cowl, we’re shown that only one half of this famous comic-book couple is willing to reveal their identity so early in their relationship.

Catwoman’s montage goes through a few different looks and actions. Unmasked, she high-kicks a man’s face, then stands in an apartment with a shoulder-length wig. She snaps down a motorcycle helmet, and then we transition to a blank black screen before our next cast members are introduced.

Bruce Wayne’s trusted British butler and friend, Alfred Pennyworth, is played by Andy Serkis (The Lord of the Rings). In his usual role of caretaker and conscience, a scarred Alfred warns Bruce of the dangers of his double life.

Nearing the halfway point of the new The Batman trailer, we start to speed things up a little bit. The editors thrill us with small scenes that we have to puzzle-piece together ourselves — could we liken this to Riddler’s clues and trail of bloody breadcrumbs?

We get Bruce Wayne in dark sunglasses, hiding behind a newspaper as he spies on someone. Then there’s a disturbing white spray-paint and red picture message left for District Attorney Gil Colson and Mayor Don Mitchell. The other phrases read: NO MORE LIES, RENEWAL IS A LIE, SAVAGE, and THE SINS OF MY FATHER??, with a big question mark in the center of this circle. It’s probably Batman walking through this low-lit scene. Spooky, right?

In the Batcave, Bruce Wayne wears a hoodie and black makeup around his eyes. “I don’t care what happens to me,” he tells — presumably — Alfred. Next we watch a motorcyclist — maybe Selina, since she talks next — wind through a graveyard, followed by another bike. Then Selina and Batman share softer moments, interspersed by Batman brutally beating more thugs with a pipe and his own two fists. What’s this factory? And what’s that neon-red nightclub? We’ll find out in March!

One of the most epic scenes in the main trailer is Batman marching through machine gun fire. Pitch black, the hallway — in what looks like a mansion, could it be Wayne Manor? — is only illuminated by all those shots. Batman appears to be managing this situation just fine. 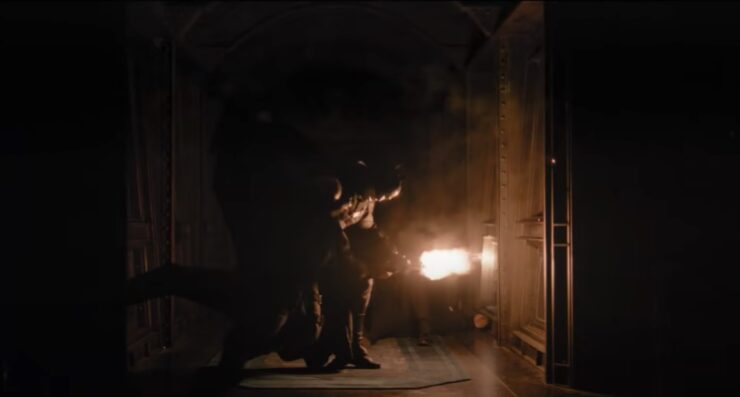 Also included in this montage is our first look at an early-days Batmobile, or a very cool, but not super durable looking, black sports car with a souped-up engine. Bruce is still learning how he wants to fight and what tools he has at his disposal; if it drives, then it’s at the very least good enough for his reckless behavior.

There’s also this awesome “Batman as a gargoyle” shot as the masked hero prepares to leap off a clock tower away from Gotham police. We can’t understand why he’s running just yet, but Batman’s methods don’t always align with the law, so it’s safe to assume he’s angered somebody with power, prestige, and strings to pull.

Similarly, the following shots are a police barricade and helicopter surrounding the Gotham City Court House, as well as a mud-covered Batman looking up to the sky. These may be purposefully spliced to inspire specific predictions, but the two do seem to go together, and it will be cool to see if they’re even part of the same act in the full The Batman film.

Some final images include: a Breaking News report of “Serial Killer Livestreams” with a masked Riddler, Batman punching more guys to Catwoman’s horror, Jim Gordon holding his gun, Bruce putting on a sweater with myriad scars, cuts, and bruises on his bare back, somebody (probably Bruce or Edward) trapped in a metal closet/cage…

A “See you in hell” note from The Riddler…

The Batman crying under his mask, reminiscent of Alexandre Cabanel’s The Fallen Angel painting…

The Batman getting launched from an explosion, alongside a spray-painted car that is likely a message from The Riddler…

A distressed Selina Kyle and equally upset Alfred, then Batman screaming as he engages in a car chase with…

Although we saw a few brief scenes with Oswald Cobblepot before this — most notably his “Take it easy, sweetheart” quip while fighting with Batman — the end of The Batman trailer gives us a real, rapid introduction.

Pursued by the Batmobile, the Penguin launches explosives and reacts with glee at the thought of “getting” the hero. But the Batmobile jumps through the fiery inferno and rear-ends Penguin’s vehicle. The car flips upside down, with Oswald intact yet terrified.

In by far the most awesome sequence in the main trailer, cinematically Batman becomes the villain as he slowly approaches this helpless character. It’s an incredibly significant tonal shift for Batman, and sets the aesthetic for the entire film right before the fade to our new vivid black and red logo.

It doesn’t take the World’s Greatest Detective to see that The Batman movie trailer is packed with incredible moments and tons of teases to keep fans on their toes. The film hits theaters on March 4, 2022.

What was your favorite part about the new The Batman trailer? Let us know in the comments, and don’t forget to Let Your Geek Sideshow!

Creature Feature: Why Are We Scared of Monsters and What Do They Represent?