Peacemaker blew up the silver screens in 2021 when he made his live-action debut in James Gunn’s The Suicide Squad. A foul-mouthed, morally reprehensible, and stunningly immature super hero, you just love to hate him. Honestly — he’s so bad, he’s good. And he’s so beloved by DC fans that he’s getting his own show.

Before you get cozy with HBO’s raunchy, rated R series, you should get to know Peacemaker a little better. Let’s break down this character’s comic history, appearances, and personality below. 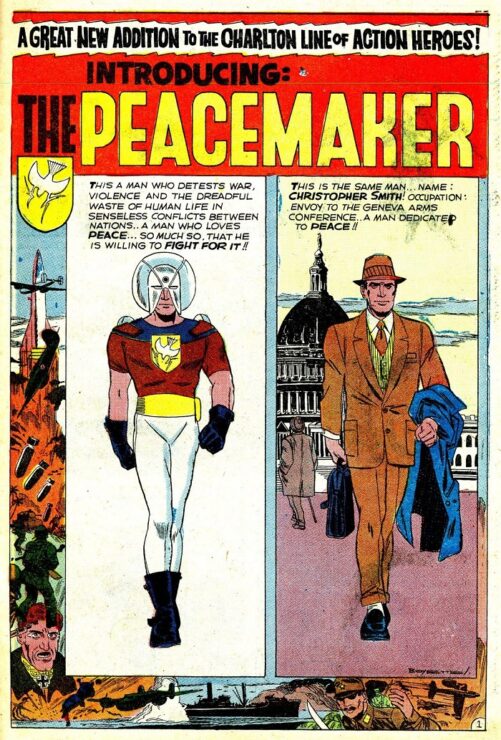 Christopher Smith first appeared in 1966. He was featured in the now-defunct Charlton Comics’ Fightin’ 5 #40. The character frequently attended the Geneva Arms Conference as a diplomat whose sole purpose was to discuss and encourage world peace. Yet this self-titled pacifist kept a massive armory in his chateau, the Peace Palace.

Smith’s initial reasons for stockpiling the weapons were unclear. He vowed never to use them … until he had a change of heart. When he was faced with threats that put his beliefs in question, he decided to physically fight for peace, though still without lethal force. Thus the violence-detesting, punch-throwing Peacemaker was born.

Peacemaker wore a red and white jumpsuit adorned with a white dove — an international symbol of peace. His silver helmet fired laser beams, and whenever they went off, he apologized or reminded spectators how much he hated violence. Still, he was convinced his diplomatic words were not enough to combat threats to world peace.

He appeared in two issues of Fightin’ 5, then received his own five issue solo run. Afterwards, he disappeared from Charlton Comics continuity. He didn’t return to panels or pages until DC Comics acquired the rights to his character. 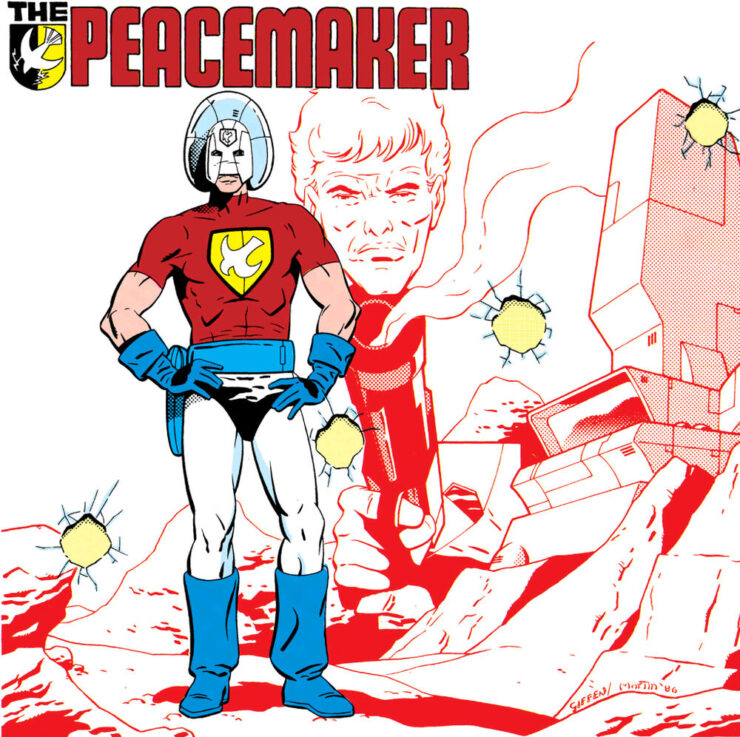 In Peacemaker’s DC Comics revival, he was similar to his Charlton counterpart. Christopher Smith was a pacifist and envoy so committed to his cause that he used force as the hero Peacemaker to achieve it. Utilizing a special collection of non-lethal weapons, he fought villains such as warlords and dictators.

The events of Crisis on Infinite Earths, however, merged the multiverse into one New Earth. Thus the Charlton Comics characters were fully integrated into DC. They also had to change to better fit into the existing canon. So the truly pacifist “Earth-Four” Peacemaker ceased to exist as the timeline replaced him with a younger, psychotic “New Earth” version. 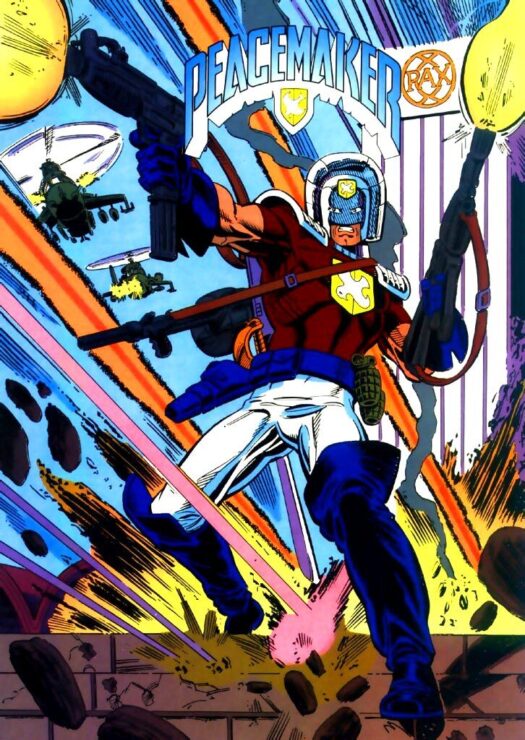 The reinvented Peacemaker was a reconciliation of Christopher Smith’s violent tendencies and peace-loving nature. Essentially, the two opposing motivations inside him made him insane. But there was a lot more to his new backstory than a simple internal struggle.

In Peacemaker’s new history, his father Wolfgang Schmidt was a Nazi death camp commandant. When Wolfgang’s war crimes were exposed, the man committed suicide in front of his 5-year-old son, Christopher. Christopher was clearly traumatized by the event. He and his mother Elizabeth Lewis relocated to America, where the child soon became aggressive, antisocial, and surprisingly academically proficient. Unfortunately, he also began seeing and hearing visions of his dead father in an SS uniform.

Wolfgang wanted Christopher to fulfill his legacy. Christopher did. When he was 18, he enlisted in the U.S. army. His first tour was in Vietnam, where, due to a military intelligence miscommunication and his father’s urging, Christopher massacred an entire village of innocent civilians. For this he was sentenced to 20 years to life in Leavenworth Federal Penitentiary.

Christopher’s mental illness could not be properly addressed in prison. Instead, he was continually called upon by the U.S. government to serve as an elite soldier in an anti-terrorism task force called Project: Peacemaker. His attention and excellent ability in this role — due in part to Wolfgang’s ghost’s praise and manipulation — earned him parole.

As a free man Christopher Smith took charge of his father’s business, changing the main production from weapons to household appliances. He became a millionaire who founded the Pax Institute, a charity organization dedicated to assisting war victims. But Christopher still fought as the masked super hero Peacemaker. His father’s spirit kept harassing him to become more and more extreme in Christopher’s quest to promote peace. 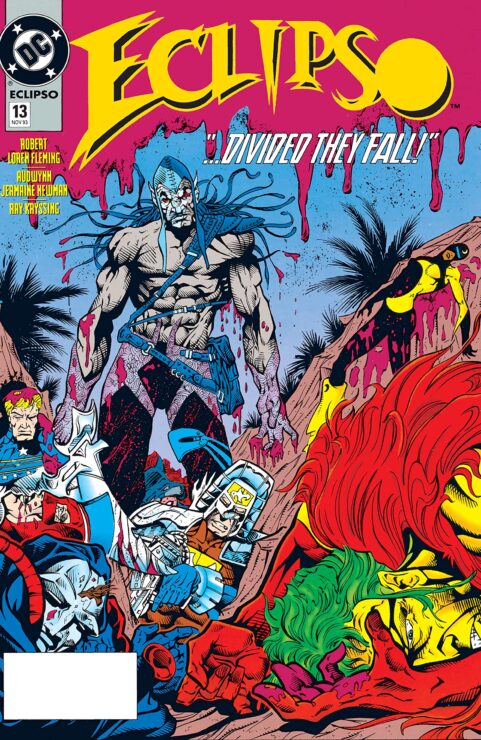 Christopher’s mental state deteriorated rapidly as he tried to live two lives. He suffered a head injury in battle that went mostly unaddressed and therefore pushed him over the edge to insanity. Although he attended mandatory therapy sessions, his psychological problems weren’t mitigated.

Peacemaker believed the souls of every person he ever killed lived inside his helmet. He also thought they could advise him during missions. It was obviously unsafe to allow him on the front lines, yet he worked for Task Force X’s branch agency Checkmate. Amanda Waller later recruited him for the Shadow Fighters.

The Shadow Fighters were sent to take down the villain Eclipso in Eclipso #13. However, the entire team was slaughtered in Parador. Christopher Smith’s spirit remained in Purgatory for some time before he was mysteriously revived. 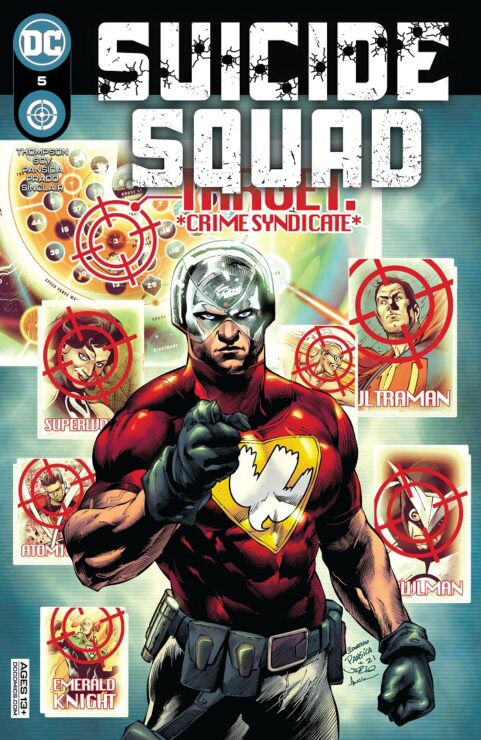 In Inferior Five, Peacemaker spent most of the story arguing with his helmet as he executed various enemies of Amanda Waller’s. He also fried the KGBeast’s face off with his helmet lasers, calling the gruesome act a “vision of peace.”

Current Suicide Squad issues have him protecting peace in his typical Peacemaker fashion. Along with the other members of Amanda Waller’s Task Force X, Christopher hunts down anyone threatening the American way — ready to kill every man, woman, and child in order to protect his unique brand of peace.

What piece of Peacemaker’s past is most interesting to you? Which parts of it do you think might make it into the HBO Max Peacemaker series? Let us know in the comments, and don’t forget to Let Your Geek Sideshow!