To celebrate Fandom Rewind, we’re also looking at fandom in retrospect. Specifically, we’re discussing the enduring messages of cult-classic ’80s fantasy films. Besides nostalgia, why do we love movies made decades ago? What’s so timeless about them that we adore them even in a modern context?

The fantasy genre appeals to audiences because fantasies often include both an epic story and a broader commentary on the real world. Fantasies are so popular because they allow us to look at our own lives, decisions, relationships, and futures through the lens of dragons and princesses and prophecies. With that in mind, let’s break down the best themes and takeaways from some fan-favorite films below. 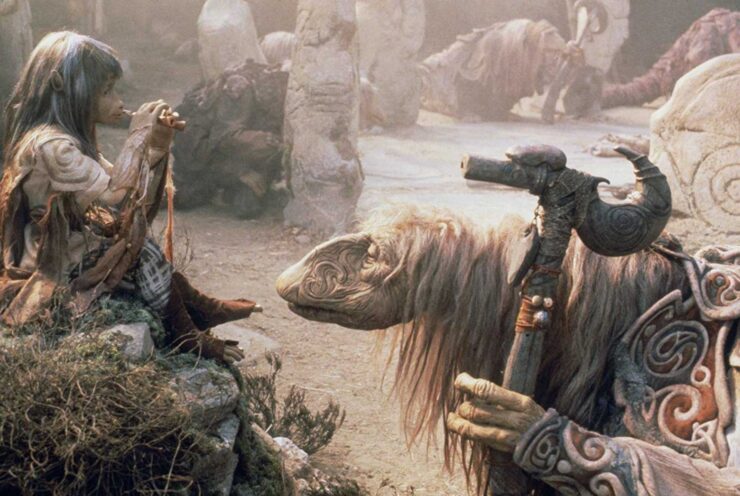 The Dark Crystal is a visually stunning dark fantasy. Directed by Jim Henson and Frank Oz, this film uses animatronics considered widely ahead of their time, from both their design and their scope—notably, some of the larger creatures necessitated four puppeteers to achieve full manipulation. This technical fact alone makes The Dark Crystal a memorable movie, but practical elements simply scratch the surface of what it has to offer.

The story follows one of the last living Gelflings, a young orphan named Jen, as he attempts to restore balance to his war-torn planet of Thra by healing the shattered Crystal of Truth. He is given this task by peaceful, sagacious creatures called Mystics or urRu. The broken gem is held by dark creatures called Skeksis, who are essentially the dictators of this ruined land.

This seems like a simple good vs evil plot, and for a while it is; Jen allies with another Gelfling called Kira and all of their antagonists are horrid, shadowy things that hide a thinly veiled commentary on the destruction of our environment. The Skeksis steal life essence from Gelflings as well as enslaved Podlings to remain young and in control, further commentary on the exploitation of the lower classes and less powerful races.

And yet at the end, the Mystics and Skeksis converge around the Crystal to merge into single beings: an angelic race called the urSkeks. The greatest lesson to take from this is that we all have light and dark within us, and we have to learn to balance our selfishness with our heroism, our darker impulses with our inner saviors. Only then can we achieve a united world and healed inner-self. 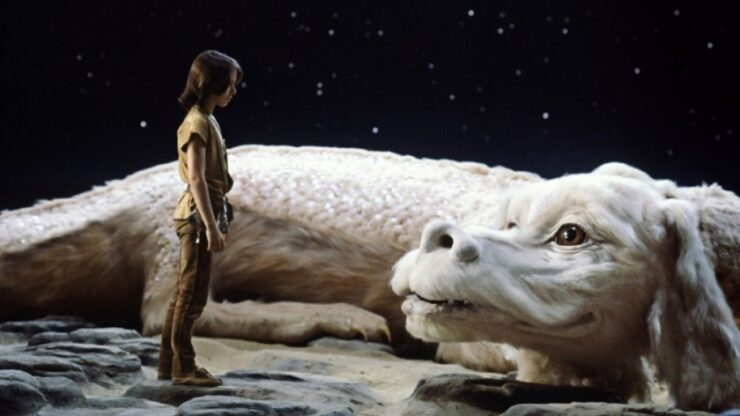 Adapted from the novel of the same name, The NeverEnding Story (directed by Wolfgang Peterson) begins in our world with Bastian Bux. This young book-lover escapes from his bullies through fictional worlds — one, however, pulls him in deeper than imaginable. Bastian discovers young warrior Atreyu’s quest to save The Childlike Empress as well as the world of Fantasia from a malevolent force simply known as “The Nothing.” While Bastian learns this, Atreyu is also learning that his so-called true self, a boy outside of the realm of Fantasia, is the key to saving his world.

The NeverEnding Story is a discussion of fate, free will, escapism, and grief. In a harrowing, memorable scene that traumatized generations of kids, Atreyu loses his trusty equine companion in the Swamps of Sadness yet he still has to journey onward; this parallels Bastian’s owns struggles with the loss of his mother. When Bastian is given The NeverEnding Story to read, Mr. Coriander the bookshop owner warns him it’s unsafe. Bastian chooses to immerse himself within it anyway, showing his potential to grow from a a child who runs away to someone capable of facing as well as defeating his fears.

“The Nothing” is absolutely a symbol of death and despair, both of which Bastian is haunted by. At the film’s denouement, Bastian fails to save Fantasia but is able to fix it with a single grain of sand, showing that we can heal even when all hope seems lost. Using his imagination — i.e. sense of self-worth, self-acceptance, and belief — Bastian revives all the good in Fantasia and finds power inside his own heart where we once only saw insecurity and sadness.

Of course, we need to understand that we can’t will all our issues to revert and pretend the bad never happened. While The NeverEnding Story shows this visually, Bastian did still have to endure extreme emotional growth, and we can view the ending more metaphorically to understand how he creates happiness for himself without truly just going back to the way things were before. 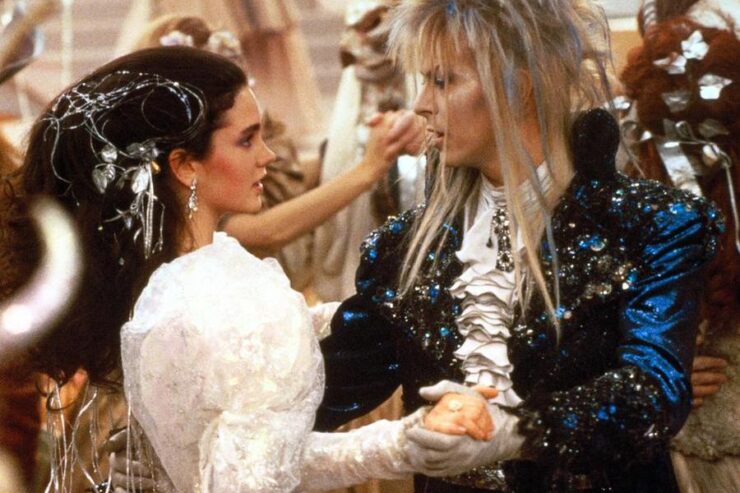 Labyrinth is a legendary musical fantasy from the minds of Jim Henson and George Lucas. Mixing puppets and live-action talent, this enchanting story boasts an unusual protagonist for an action-packed ’80s film: a 16-year old girl. Sarah Williams likes to live in her storybooks, and is bored of babysitting and being powerless in her life. Aggravated by her crying brother who’s taken her teddy bear hostage, Sarah wishes for the goblins to take the baby away — and on this dark and stormy night, they do.

Sarah’s reckless, immature wish to make all her grievances vanish has a major consequence that she must set right. She shows a lot of character immediately when Jareth the Goblin King asks to keep the baby forever in exchange for granting all of Sarah’s wishes; she refuses his advances outright and is immediately dropped into the labyrinth with the condition to solve it in 13 hours or lose her brother.

The trials in the labyrinth are directly symbolic of problems a a young girl would face in or out of a fantasy world. She falls down a basement full of hands that grope her and make her decide where she wants to go, but the decision is hardly hers when she’s just trying to flee their grip. Fiery male-presenting puppets dance and surround her, trying to claim various parts of her body as their own. Her supposedly trustworthy male friend gives her an enchanted peach that makes her fall asleep, and in her dream Jareth comes to her during a masquerade ball to seduce her. When he is rebuffed, Sarah is punished. Yet she perseveres with her wit, imagination, and the iconic quote: “You have no power over me.”

Throughout the film, Sarah struggles with her love for “childish” toys and fairytales. She somehow believes that her passions are incompatible with a responsible adulthood, hence why she resents her parents but loves her plushies and poems. By the end, she realizes she has grown immensely as she cares for her baby brother, but also tells her friends from the Labyrinth that she will still need them time and time again. This causes jubilant celebration as Sarah reconciles two parts of her life that weren’t all too separate to begin with — she just had to discover that on her own first. 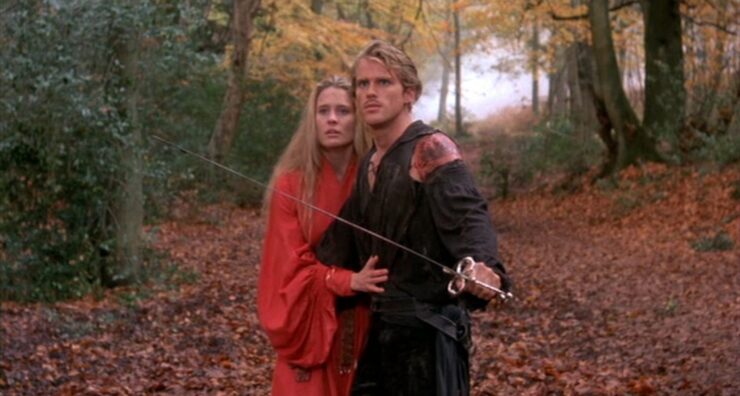 An action-adventure fantasy of epic proportions, The Princess Bride (directed by Rob Reiner) is widely considered one of those near-perfect movies. It’s got castles, sword fighting, witty one-liners, and sweeping romance. It’s also, like The NeverEnding Story, a story within a story; that is, there’s a framing story in the real world with a narrator and a book that tells the fantastical main story.

Our tale introduces Buttercup and her one true love Westley, who is rather prematurely murdered by the Dread Pirate Roberts. She mourns Westley and swears to never love again, yet is forced into an engagement with the villain of our story, Prince Humperdinck. He’s a vile, selfish man who loves his power over Buttercup more than he loves Buttercup herself. She is valued for her looks and little else despite her intelligence and practical experience from years of working and living on a farm. When she’s kidnapped to begin a civil war, she does not entrust Humperdinck to rescue her. Instead she tries to escape on her own, as she will do later when she’s taken hostage by a disguised Westley. Both these instances prove why she’s our heroine even if she does fail twice to get away.

But our main couple are not our only beloved characters! Along the journey we meet a whole motley crew of a giant, a Spaniard, an arrogant scholar, a six-fingered man, Miracle Max, an albino, a ginger, and an impressive clergyman. Each of these characters contributes so much humor and life to this film without overcrowding it. And they also show us just how full a world can be, how rich and sprawling and dangerous while still, at its core, the story simply boils down to love.

Love saves the day in The Princess Bride. Love lends a weakened Westley the strength necessary to defeat Humperdinck. Love leads to the unforgettable trailing line, “As you wish.” Love even unites the unlikely yet iconic team of Inigo, Fezzik, and Westley. Through love, Westley and Buttercup find their way back to each other each time it seems fate might separate them. Romance as the central theme of a romance might seem self-explanatory, but it’s as important a message as any other on this list. 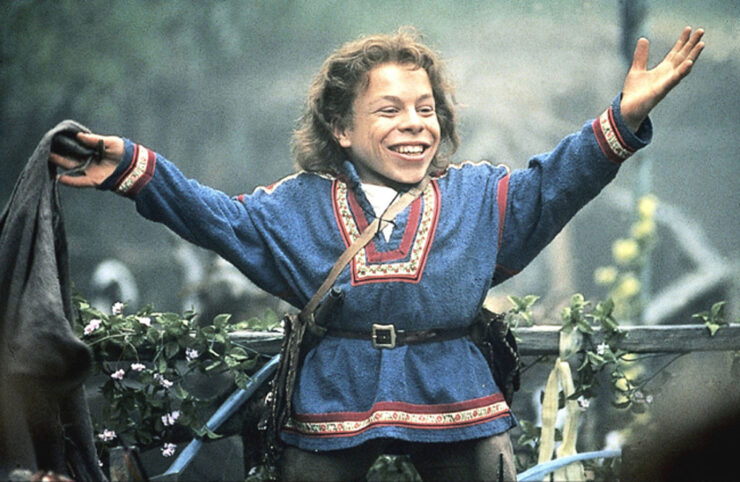 Willow (directed by Ron Howard) has all the classic fantasy tropes: oppressive class distinctions, tyrannical queens, fairies, magic, and more. This 126-minute film spans a massive landscape. We start with the disturbing roundup of babies as the evil Queen Bavmorda plans to execute the child prophesied to end her rule. The midwife, overlooked because of her status and appearance, is able to slip away and save this baby. Although she’s eventually caught, she manages to send the baby, Elora Danan, down the river to Willow Ufgood and his peaceful farm.

Willow is trying to become a great sorcerer, and he reluctantly agrees to bring Elora back to her people when the High Aldwin, a powerful magic user, charges him with the quest. Despite his misgivings and fear, as the film progresses Willow takes on more responsibility. He finds his courage. He devotes himself to a cause that will better the entire world, and it’s out of the goodness of his heart rather than selfishness. Willow’s companion, Madmartigan, also undergoes a journey of selflessness, albeit a lot slower than Willow’s self-realization.

The film actually packs quite a bit of character development into its runtime, with Princess Sorsha betraying the evil queen, the enchantress Fin Raziel coming to terms with her years spent as a prisoner, and even the Brownies being a little bit more responsible for their stolen ward by the end. Willow shows us how multifaceted people are, and how many will take the high road if given the option to excel beyond their circumstances.

Willow is also notable for its portrayal of the Nelwyn society, or a race of little people, and its choice of protagonist. The Nelwyns are not caricatures; some are heroes and some are cowards, some are warriors and some are stay-at-home mothers. Willow Ufgood, our main character, is played by an incredibly atypical leading man. So while the messages of hope within Willow are outstanding, the way the film asks us to alter our own biases and proceed without prejudice from outside the movie is just as important a theme to take away.

What’s your favorite ’80s fantasy film? Let us know in the comments, and don’t forget to Let Your Geek Sideshow! 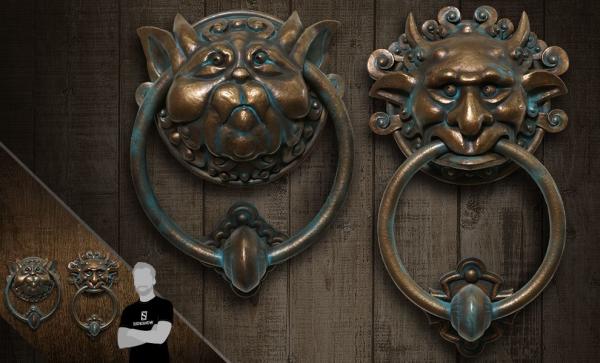 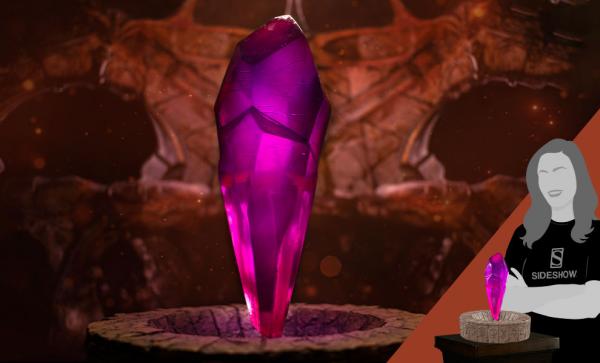 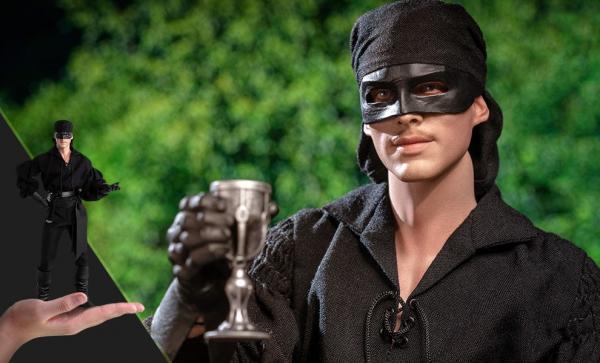 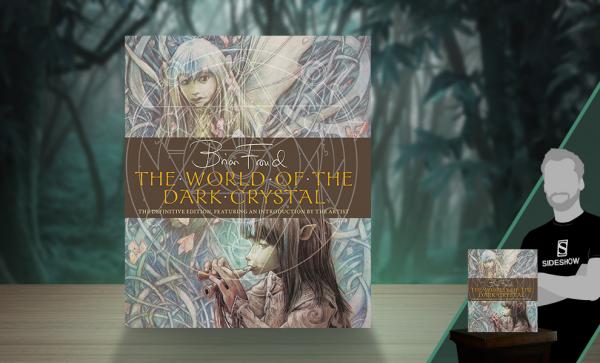 The World of the Dark Crystal
Book