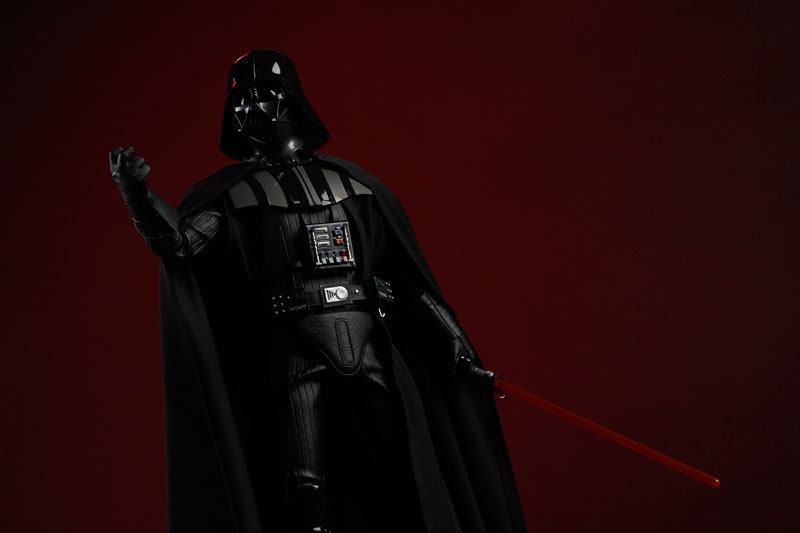 They say the clothes make the man and Sith Lords are no exception to this rule.

Exceeding Imperial expectations, the Sideshow team has seen to it that nothing has been left to chance and every detail is in order. However, in terms of deserved credit, I’m the cape that holds it all together. 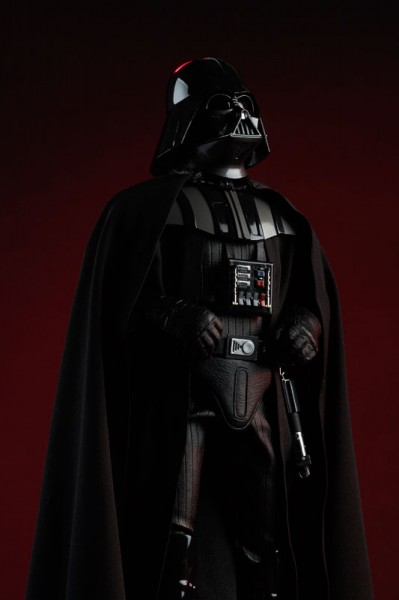 The magnitude of this feat can’t possibly be overstated, as long before you feel the cold Force-grip of death around your neck, you’ll be rendered breathless by my menacing and flowing majesty.

Yeah, being the cape on the most feared uniform in the galaxy is a thankless job at times and I end up playing second fiddle to the man under the helmet, but it’s a hell of a ride.

Darth Vader does indeed score some face time in Sideshow’s rendition via a switch out Anakin portrait showcasing all of his battle-ravaged allure. It offers a different view for me when I swish past his shoulders. I mean sometimes even capes need variety.

Then I am subjected to the endless arguments from both switch-out portrait accessories about which one is the ‘bigger deal.’ I told them they’re both about the same size so they are even, but apparently they have zero humor.

The gleaming helmet believes he instills fear and awe since he is the public face of evil and points out that the face portrait is only allowed out during meditative moments. Yet the portrait of Anakin does make a valid point that he is the actual face and also contains the detailed breathing apparatus that keeps the show running. 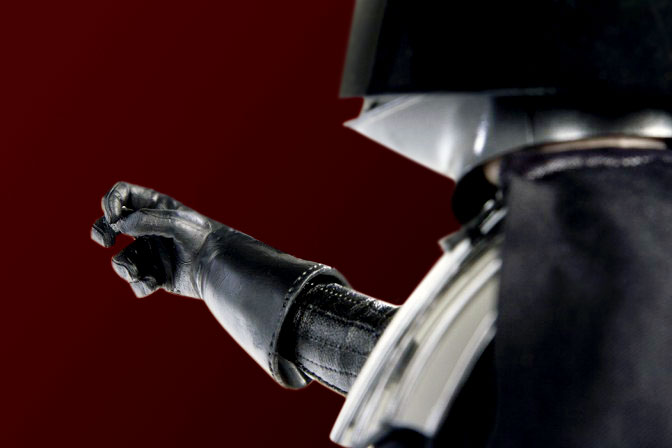 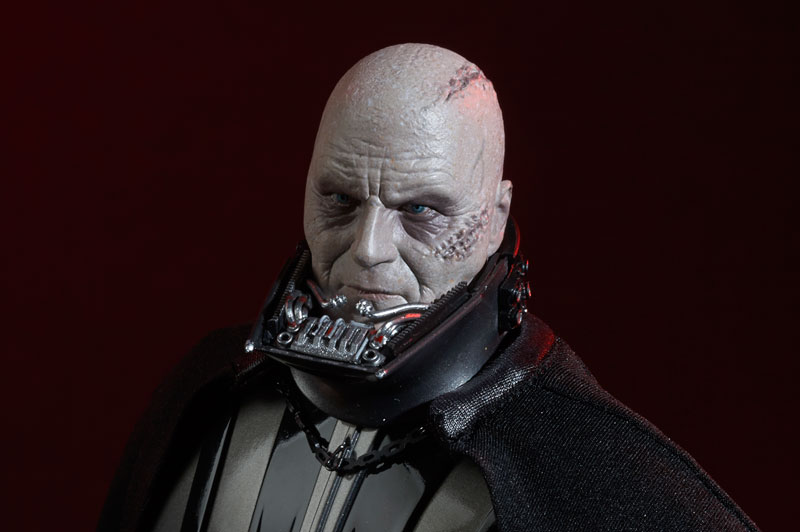 Draping the shoulders of such a powerful figure can be a daunting and often lonely task. Which is why I lay my troubles on the ears of my best pal, the chest plate control panel. The guy lights up the room, literally, thanks to a cell battery. He has more bewitching little blinkers than a Bespin airshaft and he still manages to remain modest.

However, just below the chest plate there’s a battalion of light up buttons sprinkled across intricately designed belt boxes that look amazing but I couldn’t tell you their jobs if census came knocking. Those guys are all show, clinging to the belt for survival, but they have the nerve to taunt the chest plate that they are brighter. That and they get to hear all the stories that the lightsaber has to tell when the hilt returns back to the belt, “This one time when I was lit…wooooooom, voooooom.” 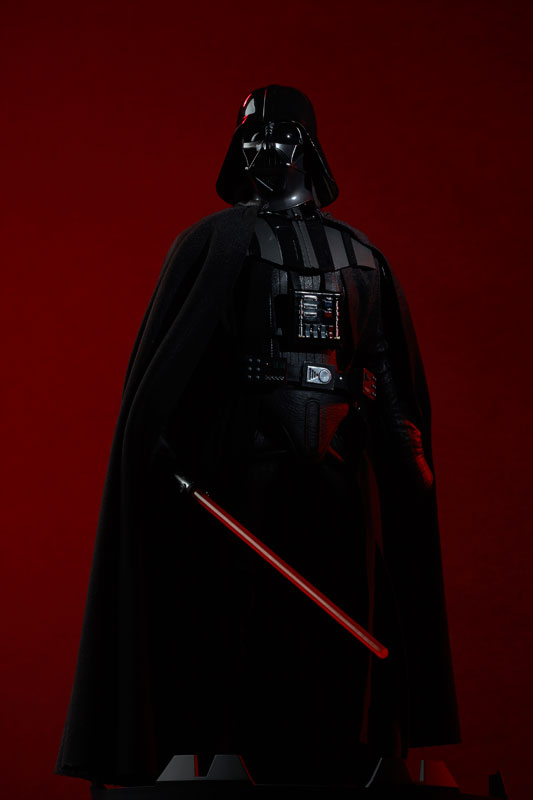 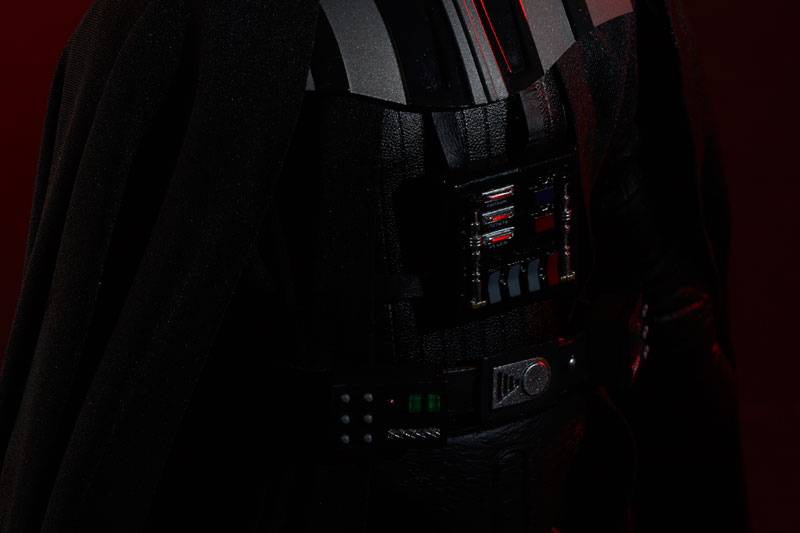 Start at my glowing, Imperial-themed base stand and guide your eyes all the way up past my fearsome fabric to the perfectly sculpted helmet and realize you’re only still alive because as impossible as it seems, I’m just a 13.75” tall replica.

Even though the rest of the figure comes with multiple gloved hands, a fabric suit, light-up features, portrait options, and two bases, once you see me sweep across your shelves rendering rebel scum paralyzed with horror you will know the true power of the cape on the Sideshow Collectibles Darth Vader Deluxe Sixth Scale Figure!

Guest review written by Phil Gibson. @MyCultCanvas
Raised by wolves in the Canadian wilderness, Phil Gibson didn’t pursue a career in the arts until he had exhausted his run in the world of cage fighting.  He is a child of the 80’s, raised under the tutelage of Spielberg, Lucas and He-Man.  He lives in North Carolina where he is an illustrator, photographer and author, working on finishing his first book.

Email us your original review of a Sideshow Collectibles figure or statue and you could be featured as a guest reviewer on our blog!