The History of Wonder Woman and Her Rival Ares 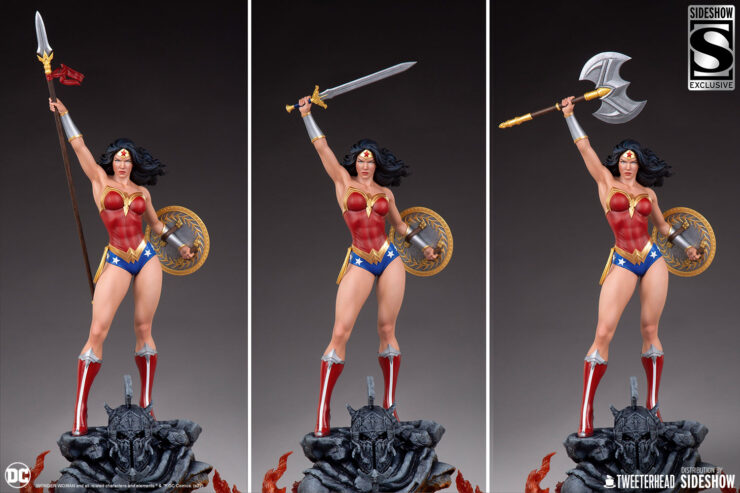 The Wonder Woman Maquette by Tweeterhead, available in both sixth scale and quarter scale versions.

Wonder Woman stands for peace and prosperity. This Amazon warrior will fight for justice from her homeland of Themyscira to the planets beyond our own. She is a symbol of harmony and of hope. After all, she was fashioned by the gods so her powers could help stop evil from spreading.

Conversely, Ares is the embodiment of destruction. Wonder Woman’s nemesis and the Greek god of war, Ares possesses infinite desire for death and domination. He promotes conflict. And Wonder Woman must stop Ares, or the entire world would suffer the consequences.

Thus this hero and villain have clashed numerous times across history. Below, read all about their relationship as enemies. Get a breakdown of their greatest battles, and discover how they’ve both changed over the course of DC Comics’ publications. 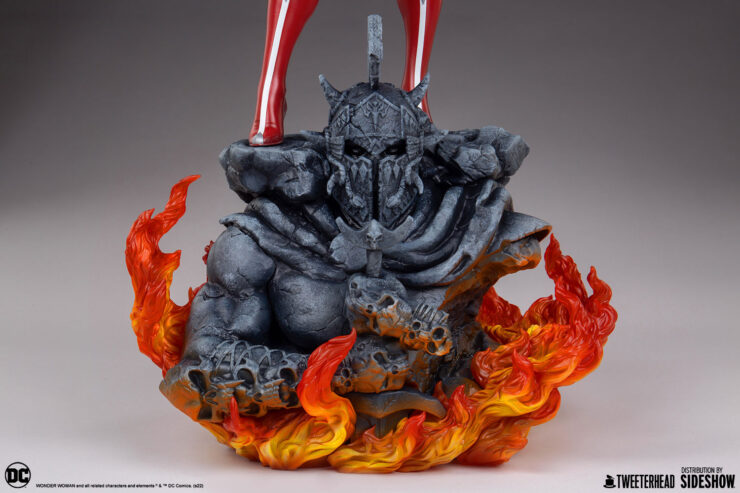 The base of Tweeterhead’s Wonder Woman Maquette is a flaming monument to her greatest foe, Ares.

Ares — also known as Mars — brings strife to the world of men. He is worshipped by weak and corrupt men. In them Ares encourages tension and terror, sowing discord to encourage wrongdoing. He inspires men to give into evil. They slaughter each other, treat women as property, and destroy their own land during conquests. But wherever this wrongdoing exists, the opposite side of the coin must exist, as well.

Thus, a new race of warriors was needed in order to oppose Ares and the unjust ways of men. Originally, Aphrodite the goddess of love was credited with the creation of Amazons. Other stories say Athena and a recent DC Black Label book, Wonder Woman Historia: The Amazons #1, says five goddesses convened in rebellion to create the Amazons. These Amazons are stronger than Ares’ men. Their leader, Hippolyta, is granted a golden girdle that makes her invincible. Sound familiar? Her daughter Diana will eventually be granted this girdle alongside many other powerful artifacts that make her the super hero Wonder Woman. 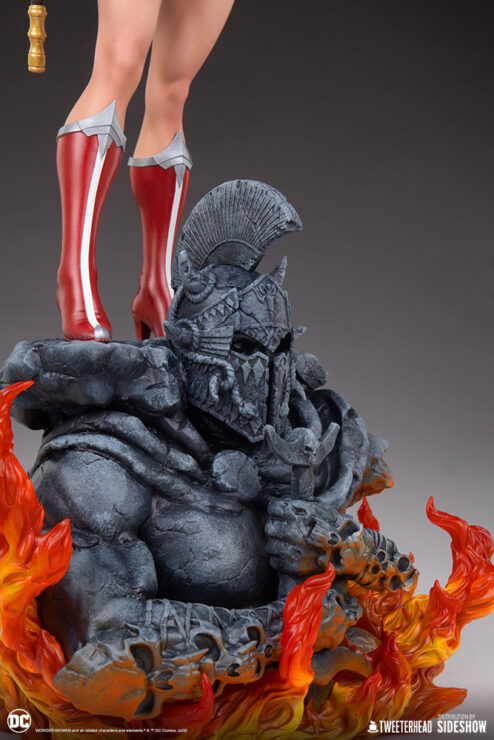 Captured in exquisitely dilapidated detail, the base of Tweeterhead’s Wonder Woman Maquette ties the hero to the immortal god of war.

During WWII, Ares intends to defeat the Allies. Favoring dictatorship, he uses his legions of enslaved warriors as well as his astral projection ability to side with the Axis Powers. However, he is repeatedly thwarted by the Amazonian champion Wonder Woman. Because Ares is interfering with the mortal world, Wonder Woman has been sent to balance the scales. Where he promotes war, she champions peace.

Wonder Woman rescues Steve Trevor from Ares’ clutches. Though she is briefly captured by the god of war, she does manage to escape. Then, Wonder Woman destroys Ares’ palace. Although he survives, this defeat leaves him far weaker than before. He must recover before he is ready to face her again. 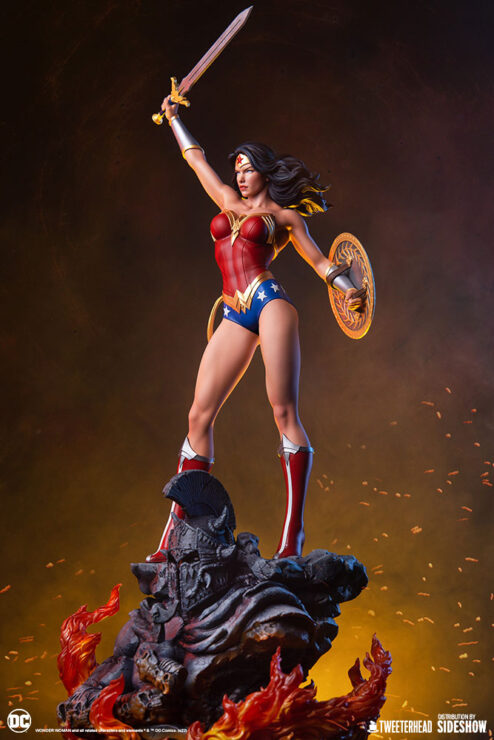 Tweeterhead’s Wonder Woman Maquette features Diana’s shield, the aegis, as well as her Bracelets of Submission, an interchangeable sword and spear pair, and of course her Lasso of Truth.

Both Wonder Woman and Ares are immortal. These characters’ very moral alignments and personalities are also as opposing as they can get. Thus they are each entangled in the next decades’ worth of wars, conflicts, and crises. Ares can truly be called Wonder Woman’s greatest foe.

Eventually Wonder Woman abandons her powers to live amongst humans. Taking advantage of her temporary absence, Ares battles the Amazons. He hopes to gain domination over all dimensions through his victory. Additionally, Ares has always coveted control of Paradise Island — Themyscira, the Amazons’ homeland. Wonder Woman’s perceived “weakness” therefore inspires him to bid once again for that authority. 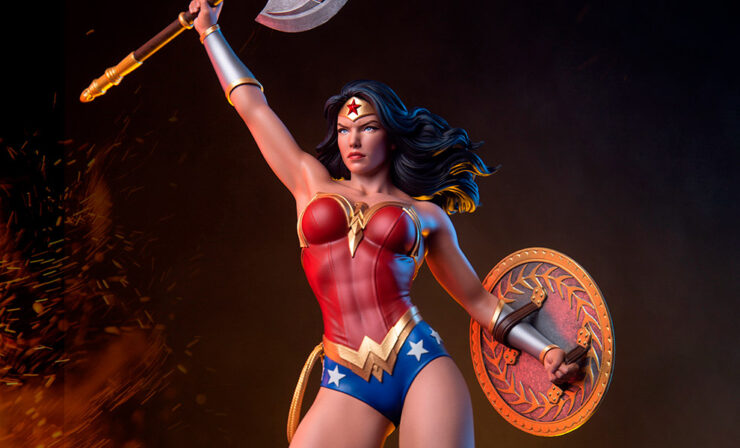 In Crisis on Infinite Earths, every parallel universe is attacked and subsequently dismantled by the Anti-Monitor. Wonder Woman as well as DC Comics’ other heroes unite across every dimension to battle this destructive force. Obviously, Ares unites with the Anti-Monitor as well as other antagonists like Hades. These three benefit from mass slaughter, of course.

Ares and Hades capture the gods of Olympus. These darker, dastardly gods seek to rule the heavens in their place. Wonder Woman clearly can’t allow this. She sends Steve Trevor to free the gods. Similarly, Hades’ wife Kore appeals to her husband with a message of love — a plea which Aphrodite would heartily approve. 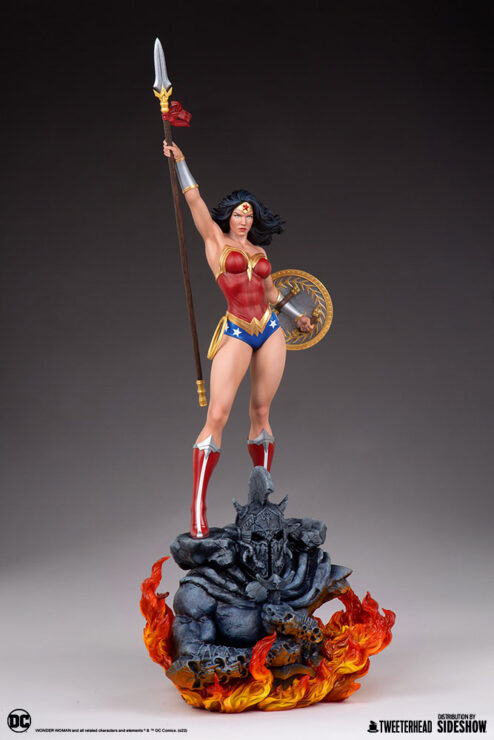 Wonder Woman does not kill Ares after their Crisis confrontation. Instead she leaves him in isolation. A far more fitting punishment, it shows Ares that love always wins. He has to watch in utter frustration and defeat as the multiverse converges and rebuilds itself. Although hundreds of heroes died, hope prevailed.

Unfortunately, Ares is simply too dangerous to be kept alive. After he once again attacks Themyscira, Diana realizes he is too great a manipulator. She decides to remove this threat from Earth. Resolute, she uses a battle axe to split Ares’ helmet — and head — in two. 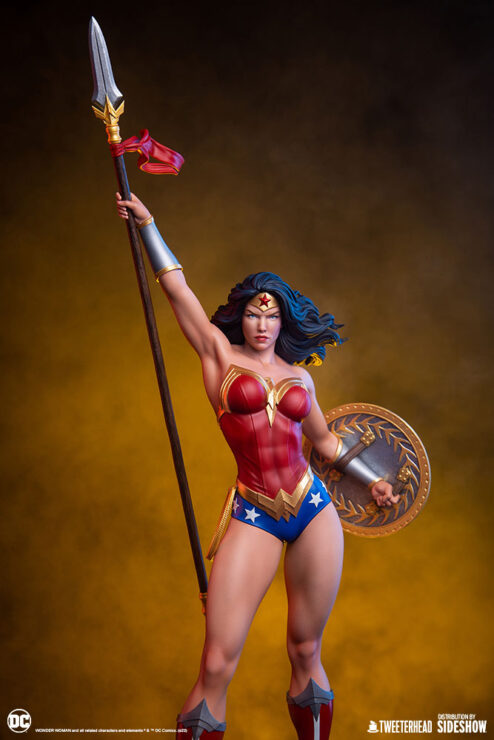 With her spear in hand, the Tweeterhead Wonder Woman Maquette stands at 37″ tall (quarter scale) or 27″ tall (sixth scale).

Love can never leave. Likewise, war will always exist. Thus even after death, Ares manipulates the mortal realm from the realm of the dead. And his story does not end there. In subsequent reboots of the DC Universe such as New 52 and Rebirth, Ares’ story changes. He has been depicted as everything from an ally and mentor to Wonder Woman to another enemy.

Ares and Wonder Woman’s storylines are forever intertwined because they are war and peace. They are creation and destruction. Existing as each other’s foils, they are destined to do this dance forever.

In the eternal struggle between love and war, you can bring a beacon of Themysciran hope to your collection with Tweeterhead’s Wonder Woman Maquette, available in both sixth scale and quarter scale. Posing atop a flaming shrine to Ares, the exclusive edition also features an interchangeable axe for Diana to wield against her greatest enemy.

What do you think is the most interesting part of Wonder Woman and Ares’ history in DC Comics? Let us know in the comments, and don’t forget to Let Your Geek Sideshow! 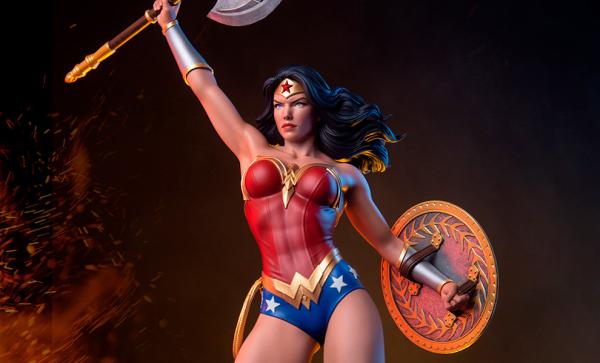 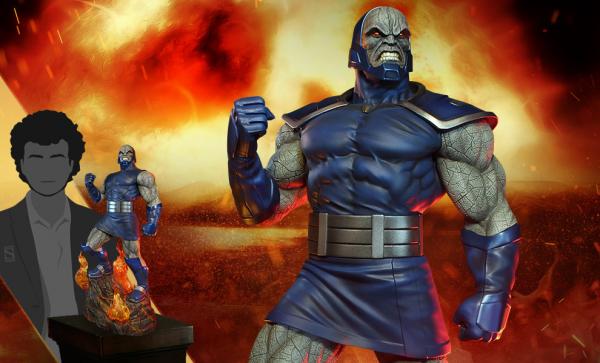 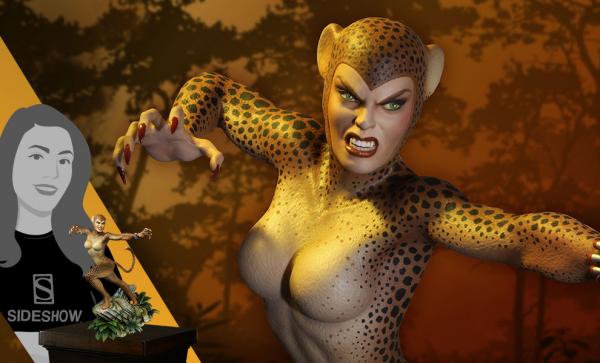