Every year we reach for our tried-and-true Halloween favorites — maybe a “slashic” like Halloween or Friday the 13th, or perhaps some gruesome comedy from Beetlejuice or Evil Dead. Many years there are even reimaginings or reboots, such as Scream (2022) and season 2 of the Chucky series. But sometimes, we horror fans want a deeper cut.

If that’s the case for you, consider some of the more off-the-beaten-path horror genres. Throughout the decades, the following four genres have been quietly (and not so quietly) terrorizing viewers. They exist in the dark corners of streaming services and are tucked away on closet shelves, but each is deserving of a second look. So you better watch your back. They’re coming to get you.

The ability to move in disorienting droves, relentlessly attacking. Talons that rip out your internal organs. Sharp beaks to peck out your eyes. No, we’re not talking about some sort of otherwordly creature. We’re talking about birds. Avian horror is an oft-overlooked genre that has created two classic films with equally devastating effects: The Birds and The Crow.

Sure, this genre of horror could technically include scary dinosaurs (birds are dinosaurs, we didn’t make the science rules). Our analysis, however, will focus on the flying figures of fright that have plagued our screens since 1963, with Alfred Hitchcock’s The Birds. While some might recall Snow White and her sweet enchantment of birds to sing with her, Tippi Hedren faces an entirely different type of bird. From sparrows to seagulls and even lovebirds, the avian antagonists of this film are nearly impossible to escape. Their motives are even more elusive, making them a vile corruption of nature. They drown out the sun as they take to the skies and their song strikes fear in everyone’s heart. Take cover!

Modern Horror Is For the Birds

Three decades later, The Crow would again remind audiences that it might be cute to feed the birds at the park, but these sky-bound predators are not what they seem. For Eric Draven, a crow grants him the chance for vengeance. He is brought back from the dead and guided by the crow in punishing those who murdered his fiancée. The Crow is a cult classic and in this movie, the titular raven-feathered being is an ally, a force of nature that allows Eric the closure he needs.

Likewise, birds are an important tool for Sandra Bullock’s character in the 2018 film Bird Box. Without revealing too much, birds are essential in surviving entities whose very sight causes humans to immediately lose their minds. On the other hand, birds have also inspired some truly absurd horror titles such as ThanksKilling and Poultrygeist: Night of the Chicken Dead. Also, an honorable mention goes to Schitt’s Creek for Moira Rose’s critically acclaimed cinematic comeback, The Crows Have Eyes III: The Crowening. 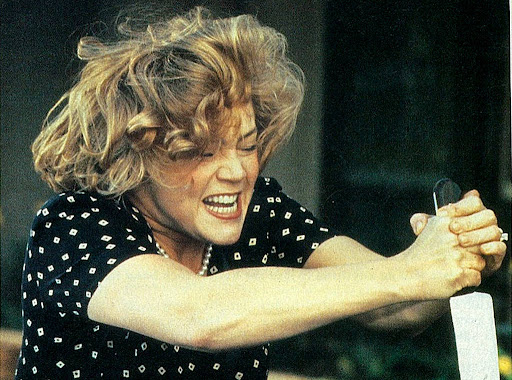 Speaking of absurdism, that brings us to camp horror. No, that’s not a place by the lake where some dude’s mom might murder you. Camp is an adjective that’s hard to completely describe. Essentially, it’s a style that uses ironic exaggeration and over-the-top visuals. It’s ridiculous and kitschy, sometimes careening into cringe territory. Think Rocky Horror Picture Show. The intriguing part is that camp isn’t always intentional and often camp is intertwined with queer culture and themes.

Joan Crawford is an example of Old Hollywood Camp, especially in her films Strait-Jacket and Whatever Happened to Baby Jane? Both of these films are classics because they portray absolutely unhinged women that are at once comedic and terrifying. There’s something very satisfying about seeing characters give in to their madness and that’s what camp allows us to do. An axe murderer in high heels and an aging starlet who terrorizes her sister? Doesn’t get campier than that.

If you’re worried that campy horror might not have enough gore, never fear: Freddy Krueger’s second film appearance is hailed as definite gay camp in Nightmare on Elm Street 2: Freddy’s Revenge. More recently, Jennifer’s Body is a Satanic exploration of teenage hormones at their worst. Each of these films will have you laughing out loud at the delirious dialogue while also squirming at the reckless spill of blood and guts.

Camp has also taken a stab at the twisted horrors of suburbia. For fans of midcentury macabre, look to The Stepford Wives. Actually, a double feature of the original 1975 film and the 2004 remake would be an interesting study about the social prisons we all fall victim to, whether we know it or not. Slasher comedies like Parents and John Waters’ Serial Mom also show how society’s strict expectations to be perfect and wholesome can lead to some decidedly unwholesome behavior, from vulgar prank calls to murder by way of leg of lamb. Lastly, there’s Jawbreaker, the quintessential ’90s camp horror film with bright colors, evil teen drama, and killer candy.

Maybe you’d like a nice trip to the sea, away from all that nefarious nonsense. Not only are the waters themselves unsafe, due to monstrous killers like Jaws, but the cute little towns next to the ocean usually have their own sinister motives lurking under the surface. The pleasant crashing of waves is the perfect cover for the screams of a murder.

Nautical horror is especially notable for its appealing aesthetic. The quaint backdrop of a seaside town and the muted colors of cool gray and warm blue will relax you into a false sense of security until that first hatchet comes wailing down.

Back in 1961, nautical horror got off to a soft start with Night Tide, a cautionary tale of the alluring beauties of the ocean set against the seedy backdrop of the Santa Monica Pier in Los Angeles. But the tides of terror really roll in with Messiah of Evil in 1976. This zombie flick feels like the atmospheric Italian horror that the 1970s are famous for, but its slow pace and stilted storytelling only add to the mounting sense of madness. After this one, you’ll never stroll down the aisle of a grocery store the same.

In the early 1980s, two nautical horror staples are The Fog and Dead & Buried. From John Carpenter (yes, you know the one), The Fog boasts an incredible cast, including Adrienne Barbeau, Jamie Lee Curtis, and Janet Leigh. Plus, the titular weather is surprisingly suspenseful. Likewise, Dead & Buried benefits from a false sense of coastal charm because there is plenty of gruesome gore and well-crafted jump scares to satisfy every horror fan. See if you can spot Robert Englund among the crazed townsfolk. 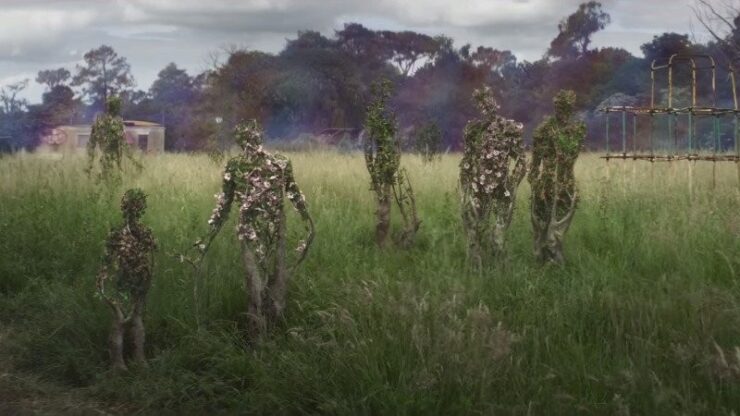 Ah, the great outdoors, where you’re always encouraged to stop and smell the roses — unless of course they’re carnivorous and/or emitting hallucinogenic spores. Botanical horror is among the most subtle genres of horror. Plants are capable of taking center stage or slowly growing on you in the background. Lots of plant horror also feels very gothic at its core, especially since the genre has its roots in literature such as “Rappaccini’s Daughter” and “The Flowering of the Strange Orchid.”

Back in the era of black and white film, unassuming alien plants are the culprits of Invasion of the Body Snatchers. The plant aspect of this movie is a blink-and-you-might-miss-it moment. The 1978 remake does a more thorough job of featuring the parasitic plants and that final scene will stay with you for days.

However, floral fear takes a new form in a sassy potted plant who demands more than water and sunlight in The Little Shop of Horrors. In addition, gruesome garden products are the main antagonists in Attack of the Killer Tomatoes, a 1978 spoof of B movies. So far, plants have gone from sinister seedlings to flesh-eating flora, but the next steps in botanical horror are even more grotesque.

Eventually, plants and humans would merge into the horrific horticultural hybrid known as Swamp Thing, who made his DC Comics debut in 1971 before jumping to the big screen in Wes Craven’s 1982 film. Teetering the line between defender of greenery and defender of people, Alec Holland has become an enduring fixture in many spooky storylines, with the antihero even getting a short-lived but enjoyable TV series from DC Universe. However, hybrids are not the final resting place for herbaceous horror.

As seen in video games with bio-organic mutagens (Resident Evil) and infectious fungus (The Last of Us), the world of murderous plants grows beyond leaves and petals. In the modern age of botanical horror, plants fight back with devastating force that is hard to see and harder yet to understand. Films like Annihilation, Little Joe, and In the Earth explore how plants communicate with each other as well as have the unique ability to creep into our psyches. Any horror that’s based in nature is tapping into the human fear of losing control. Nature will always remain a force outside of our jurisdiction. And whether it’s through hallucinogenic spores or tellurian miasma, plants are more powerful than we give them credit for.

The next time you’re craving some horrific thrills, choose carefully. The well-known blockbusters will always be there waiting for you, but hidden in the shadows are some truly demented selections. After all, what’s the worst that could happen? With any luck, you’ll walk away with a freshly awakened new fear.

Is there an obscure horror genre that you love to loathe? Share your thoughts with other fans at side.show/geekgroup, and don’t forget to Let Your Geek Sideshow!

Heartthrobs of Horror Who Get Your Blood Pumping