While the series’ end is considered contemptible by many, I can’t help but pine for a return to the Seven Kingdoms. Unfortunately, there’s no clear indicator as to when A Song of Ice and Fire author George R.R. Martin will complete the sixth installment in the book series, which is titled The Winds of Winter. However, in a few weeks House of the Dragon will premiere, a Game of Thrones prequel series about House Targaryen and the Dance of the Dragons.

In the meantime, I thought it might be fun to rank the nine great houses in Game of Thrones, because there’s nothing I love more than putting my opinions about stuff on the internet. Peruse at your peril. 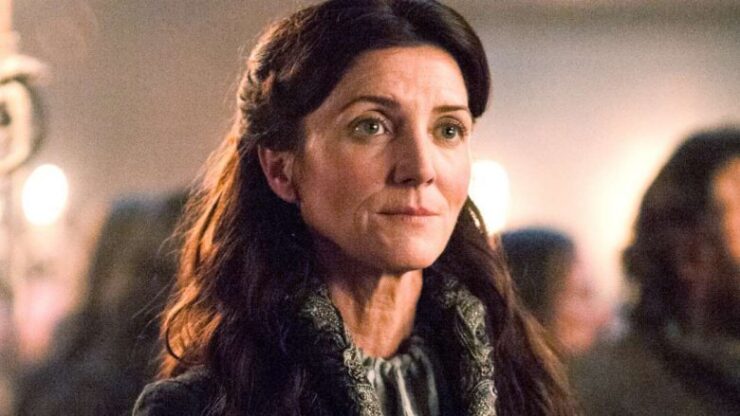 The Tully seat Riverrun is nestled within the Riverlands, which is quite a precarious position. It’s a sitting duck for encroaching enemies. Riverrun isn’t very fortified nor is there much by way of natural properties protecting it.

House Tully might be the ruling house in the Riverlands, but they’re not nearly as wealthy as other major houses in Game of Thrones. However, they have a modest income at their disposal and can forge alliances with more powerful houses in Westeros.

Now, Catelyn’s sister Lysa Tully married into House Arryn, which is how we were introduced to them in Game of Thrones.

House Arryn resides in the Eyrie nestled within the Vale. The Eyrie, in my humble opinion, is the most fortified out of all the major house seats in Westeros. It’s erected on top of an immensely steep mountain range. People have perished attempting to climb to the Eyrie.

Of course, with House Arryn being so protected, they seldom participate in the affairs of Westeros except to arrange marriages with suitable counterparts. House Arryn is wealthier than House Tully and, in spite of its isolated location, manages to keep its household well fed and nicely dressed. 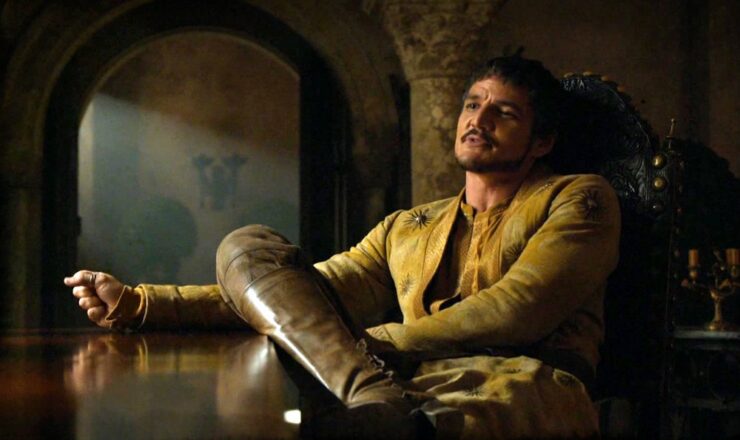 Pictured: Pedro Pascal as Oberyn Martell in Game of Thrones

House Martell is situated within Dorne. Dorne is still part of Westeros, despite it being the southernmost kingdom in the realm. Dorne could easily fit in with Essos.

Anyway, House Martell, much like House Tully, possesses some of the strongest fighters in Westeros — Oberyn Martell, for starters. However, most of House Martell was utterly decimated in Game of Thrones. Essentially, we saw House Martell meet its end. Well, Arianne Martell is still alive and kicking, but she doesn’t exist in the TV series.

In addition, House Martell lives in desolate, desert-like terrain. Most Westerosi houses wouldn’t fare well duking it out against House Martell in Dorne. Vice versa, House Martell would find it difficult to gain the upper hand while adapting to Westeros’ more rocky and unpredictable landscape.

We were introduced to House Baratheon when it was the ruling house of the Seven Kingdoms. Robert Baratheon claimed the Iron Throne for himself after dethroning “Mad King” Aerys II Targaryen.

Of course, it’s quite obvious that Robert was a formidable warrior in his youth. His older brother, Stannis, was immensely clever and pragmatic when it came to the art of battle. Then there’s Robert’s younger brother Renly. Renly had charm and wit coming out of his ears.

House Baratheon used to be part of House Targaryen before they eventually broke off and claimed the Stormlands as their kingdom. They’ve got plenty of coin in their purse and significant connections to the other major players in Game of Thrones.

Unfortunately, House Baratheon was mostly destroyed in the show, save for Robert’s bastard son Gendry, who revitalized the house seat Storm’s End and breathed new life into its name.

Now, House Tyrell is, without a doubt, one of the richest houses in Westeros. Think of them as the billionaire 1%, buying their way out of scandal after scandal. Purchasing alliances and forging marriages left and right.

House Tyrell’s seat, Highgarden, resides in the Reach. They’re noted as Wardens of the South. Highgarden is the most opulent and lavishly decadent house seat in the Seven Kingdoms. Money talks.

In addition, House Tyrell has beautiful people aplenty, charisma, and silver-tongued nobles. Loras Tyrell is one of their more notable fighters. They may not have the strongest army, per se, but they do have a powerful ally in House Lannister, who supplies able-bodied warriors and makes them damn near unstoppable. 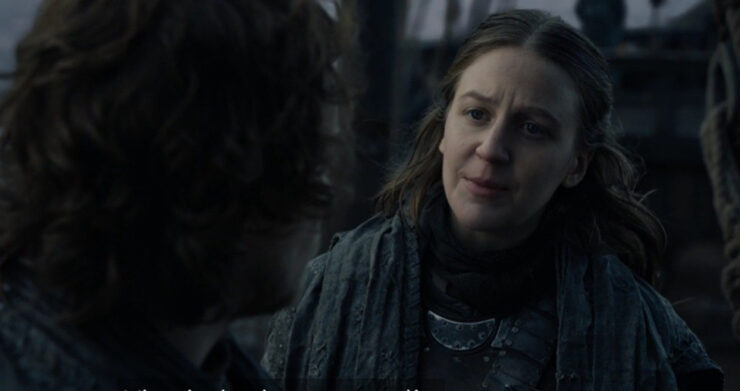 Pictured: Gemma Whelan as Yara Greyjoy in Game of Thrones

“We do not sow.” “What is dead may never die.” How badass are those house mantras? Pretty badass, if you ask me. House Greyjoy is one of my favorite houses in Game of Thrones.

They’re not preoccupied or distracted by the malarkey taking place in the other six kingdoms. They’re not obsessed with laying claim to the Iron Throne. Instead, we see a considerably smaller but still significant battle for the Sea Stone chair in House Greyjoy’s seat Pyke. All of this takes place in the Iron Islands, wherein the Ironborn thrive on the seas of their Drowned God.

That’s what makes them stand out from other houses in Westeros — they fare better sailing the ocean. Of course, they’re still just as formidable and downright terrifying on land. The Ironborn are considered to be barbaric and relentless. Cunning. Brash. Essentially, you wouldn’t want to encounter an Ironborn in a dark alley.

House Greyjoy has managed to foster their own kingdom almost separate from Westeros. In the series finale, they extricated themselves entirely.

House Lannister’s seat is in Casterly Rock, situated in the Westerlands. They’re actually considered the wealthiest house in Westeros with House Tyrell not far behind them. Why? The Westerlands are chock full of gold mines.

In addition, House Lannister boasts some of the strongest fighters in the Seven Kingdoms. Jaime Lannister, anyone? Even when he lost his sword hand, Jaime still proved to be just as menacing as ever, albeit a mite slower in retaliation. Cersei Lannister is, undoubtedly, one of the most cunning minds in Game of Thrones.

House Lannister is not short on intellect nor are they bereft of unmitigated loyalty. They know how to play the game of thrones and they’re not afraid to get their hands dirty in the process. This house will do whatever it takes to gain total supremacy over Westeros. Tywin Lannister is proof positive that House Lannister is not to be trifled with.

Dragons, folks. Really, that’s all you need to know about House Targaryen. They have the ability to control dragons at will, riding them into battle as they scorch small villages and kingdoms alike. Not to mention, most House Targaryen kin can survive walking through fire. They’ll emerge from the flames unscathed. (I wish I was flame retardant!)

Anyway, House Targaryen is probably the most ancient house of Westeros. They’re comprised of the “blood of old Valyria.” After Robert’s Rebellion, it was thought House Targaryen was wiped clean from the map. That is, until years later when Daenerys Targaryen rose from obscurity in Essos and embarked on a sojourn to reclaim the Iron Throne in Westeros.

Three dragons joined her — in fact, they were the only dragons to rise from the ashes after centuries of dormancy. Daenerys’ older brother Rhaegar was considered to be one of the most skilled fighters in Westeros. It’s pretty hard to beat your foe in battle when they’re armed to the literal teeth with dragons that can spew fire.

“Winter is coming” may be a tagline for Game of Thrones, but it’s also the mantra for House Stark. House Stark takes the crown and Iron Throne as the best of the best that Westeros has to offer. House Stark’s noble seat is Winterfell in the North. They’re an honorable, just, and overall benevolent house. They believe justice must be as swift as the blade of a sword.

Jon Snow, the bastard son of Lyanna Stark and Rhaegar Targaryen, was once King of the North. House Stark and House Targaryen share a bloodline through him. Arya Stark could change her face at will. Her sister Sansa proved to be calculating, capable, and masterful at the game of thrones. Bran Stark eventually sat on the Iron Throne as the Three Eyed-Raven, possessing all the wisdom and visions of the past and future. In addition, Bran had the ability to warg, meaning he could gain control over an animal’s consciousness.

House Stark’s snowy terrain is also quite intolerable for multiple southern houses in Westeros. However, this house can weather any storm and survive the coldest of winters. They epitomize survival.

Well, that’s all I wrote! How would you rank the great houses in Game of Thrones? Keep the conversation going over at side.show/geekgroup, and don’t forget to Let Your Geek Sideshow!