Wakanda Forever! T’Challa, the Black Panther and King of Wakanda, is a character loved by both MCU audiences and readers of Marvel comics. His on-screen presence, portrayed by the late Chadwick Boseman, represents many things for many different fans.

But when it comes down to it, T’Challa is unlike any other super hero. He doesn’t struggle with his identity — instead, he is proud to represent his nation of Wakanda. He isn’t hotheaded and doesn’t have a temper — instead, he is wise yet firm. When T’Challa speaks, everyone listens. That’s the power of his words, and a power he wields in and out of his Vibranium suit.

Earlier this week, Marvel debuted a new podcast documentary about T’Challa’s origins, a six-episode series hosted by New York Times best-selling author Nic Stone, that will bring together celebrated writers, artists, and historians to discuss the iconic hero. Now, let’s take a look at some of T’Challa’s most powerful quotes in the MCU.

“You want to see us become just like the people you hate so much! Divide and conquer, just as they did!”

T’Challa says this to Erik Killmonger, his estranged cousin and the foil to his own strict moral compass. With Erik, however, this is a conversation much deeper than just one quote but T’Challa still manages to summarize the issue: Is it better to beat someone at their own game, as Erik wishes to do, or try to change the game itself?

In battle, T’Challa is swift and agile, striking like lightning in the middle of the night, but he also holds steadfast to his values. Though he and Erik ultimately have the same goal, liberty and dignity for their people, T’Challa is unwilling to use the same tactics as the oppressor.

“Every breath you take is mercy from me.”

Sure, T’Challa is known for his levelheaded demeanor. In the face of seemingly impossible odds, he keeps his cool. But even the Black Panther isn’t above reminding an enemy just where they stand.

After the citywide chase in Busan with Ulysses Klaue, T’Challa apprehends the smuggler. Klaue taunts T’Challa and asks for mercy, which is when the hero says the line above. Nakia and Okoye arrive on the scene and remind T’Challa that the confrontation is being filmed by onlookers, so he reconsiders his actions. Aside from being an excellent example of Black Panther’s fearsome battle persona, this dialogue actually originated in Jonathan Hickman’s Secret Wars, during a confrontation between T’Challa and Namor.

“Sometimes the best weapon in your arsenal is just a good argument.” 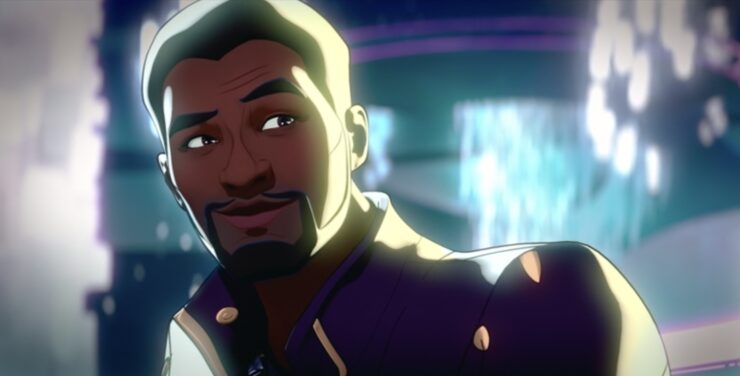 True power is not unlimited strength or energy blasts. It’s actually restraint. No one knows this better than T’Challa, especially the alternate universe T’Challa we’re shown in Marvel’s What If…? episode 2, “What If … T’Challa Became a Star-Lord?” Through the effect of his diplomacy alone, this alternate timeline T’Challa literally saves his entire universe from Thanos’ genocide. Just his presence inspires awe in his adversaries and can switch them from opponent to ally.

The unique draw of Marvel’s What If…? was seeing how characters changed or remained the same across different timelines. And this appearance of T’Challa proves that no matter who or where he is, he will always uplift and inspire, bringing out the best in those around him.

“I will not abandon someone to die when I have the means to save his life.”

Despite General Okoye’s objections, T’Challa chooses to try to save Agent Ross’ life, even at the risk of exposing Wakanda. While T’Challa is forever loyal to his nation, he also cannot stand by if he knows there’s something he can do. T’Challa’s compassion is a strength greater than any Wakandan technology (which is saying a lot).

“Today we don’t fight for one life, we fight for all of them.”

Selflessness is basically Super Hero 101. And if that were an actual course, T’Challa would be teaching it. Whether he is sparing a fallen enemy or inspiring his army before battle, T’Challa never loses sight of his mission: to protect the people. Like a true leader, T’Challa fights for those in need, whether they are Wakandans, allies, or innocent citizens of the planet — especially against an enemy like Thanos.

“But in times of crisis, the wise build bridges while the foolish build barriers.”

In the first post-credits scene of Black Panther, King T’Challa is seen addressing the United Nations. After the events of the film, the king decides to reveal Wakanda’s true power to the rest of the world. In his speech, he urges people to function as one tribe rather than separate entities. His message of unity is one that deeply resonates on screen and off.

“We let the fear of our discovery stop us from what doing what is right. No more.”

Even for Erik, who killed him and usurped the Wakandan throne, T’Challa still displays endless compassion for his people. He is rightfully angry at the ancestors for leading Wakanda into a state of secrecy and hiding, rather than asserting their power and using it for good in the world. T’Challa refuses to continue living behind a smokescreen.

“Vengeance has consumed you. It’s consuming them. I am done letting it consume me.”

Make no mistake, this scene is not mercy from T’Challa for Helmut Zemo. When Zemo attempts to end his life, T’Challa intervenes not to save him, but to make him face the consequences of his destructive actions.

However, from Zemo, T’Challa does have an important realization: It would have been easy to give in to vengeance and kill Zemo right then. But vengeance is a poison that spreads from within to corrupt a person. Though he has no desire to save Zemo, T’Challa also sees that no good comes from seeking the destruction of others.

“Where I come from, history has never looked kindly on those who lock people in cages.”

T’Challa is not one to mince words. When he sees wrongdoing, he does not hesitate to call it out. In this instance, T’Challa, as Star-Lord, confronts the Collector. He has been placed in a cage within the Collector’s endless menagerie and he alludes to the vile nature of attempting to own another person.

Though these words are simple in their meaning, they still carry a message that applies to today, whether those cages are literal or figurative. T’Challa’s statement against the Collector even inspires Carina, the crime lord’s slave, to defy her master and take him down.

One of the most straightforward of T’Challa’s quotes is also among his most meaningful words. He says these words as part of his introduction of Wakanda to the rest of the world. A delegate asks the king what his nation of farmers can offer the rest of the world. In their ambiguity, these five words can mean so much.

T’Challa could be referring to his pride as a Wakandan, a nation whose technology has enabled a beautiful society to thrive. Or, he could be referring to the power in his identity as a Black super hero fighting for those that look like him and face the challenges that he does. Lastly, he could mean all of these things wrapped up into one, which is fitting when T’Challa’s eloquence and wisdom are taken into account.

There are few other heroes in the MCU whose presence is at once commanding and reassuring. As royalty, T’Challa is confident and progressive. As Black Panther (or Star-Lord), he is a hero who others should look to as inspiration.

Yibambe! Tell us your favorite T’Challa quotes in the comments and don’t forget to Let Your Geek Sideshow!