Season 7 of Star Wars: The Clone Wars just keeps getting better. We previously recapped the start of the season with Episodes 1-3, and the epic return was just getting started. In Episodes 4 through 6, the fanbase was offered some nice throwbacks and intense action sequences.

Let’s recap on all the latest Clone Wars coolness. 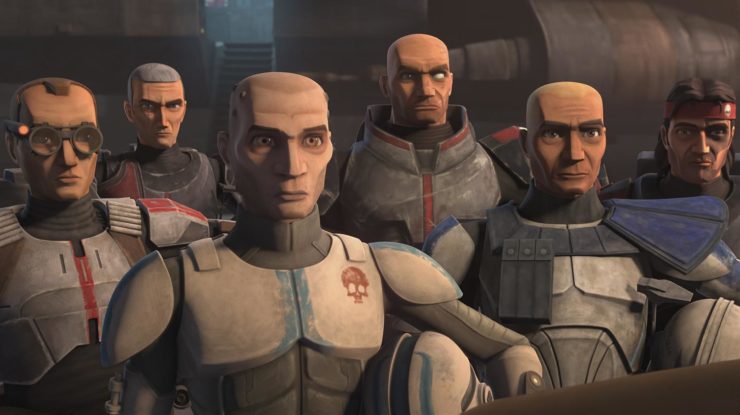 The awesome Bad Batch story is coming to a close, at least for now. And the final episode of the first arc is deep, funny and thought provoking.

The Jedi are losing too many people on Anaxes. In spite of his mutilated body, Echo wants to join them in the fight. His plan is for a team to sneak onto Admiral Trench’s dreadnought ship in orbit. From there, Echo will connect to the system as he did when held captive, but this time willingly. He will then use algorithms to give the Separatist armies misleading orders. The Separatists don’t even know that he has been freed (the Techno Union is too ashamed to admit it to their allies) so they’ll assume the algorithms are from his unconscious mind.

As they go through this plan, Mace Windu has a cool moment down on the planet. He corners a group of droids and gives them a chance to surrender. Of course, battle droids are notoriously stupid, so they ignore his advice and start shooting. Needless to say, the droids quickly become a scrap heap. This scene sets up an interesting concept about Separatist droids – since Windu gave them a choice, is this evidence they have free will beyond their programming?

As we ponder this question, the action is heating up inside the dreadnought. Despite a few pitfalls, the plan succeeds. But Admiral Trench now knows about the saboteurs, so Anakin makes his way to the bridge for a fight. We get an awesome scene where Skywalker demonstrates his gradual descent into the Dark Side. To get information for Windu to disarm a bomb, he slices off a couple of Trench’s arms. After cooperating, Trench lunges for the Jedi, but Anakin finally kills him. This death was necessary, but the way Anakin went about it showed the fury of the Dark Side.

In the end, the heroes are victorious, and the dreadnought has been destroyed. In an emotional moment, Echo decides to part ways with his squadron and join the Bad Batch.

Episode 5: Gone With a Trace 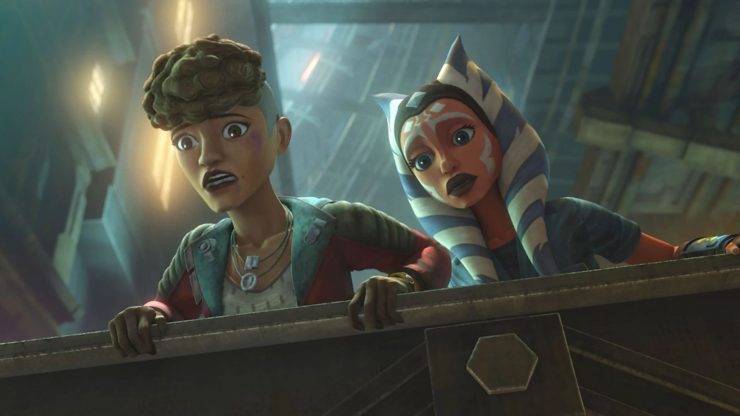 The next episode gives us something we all desperately needed – more Ahsoka Tano! Plus, it’s got a pretty clever title.

Arguably the best character in the whole series, Tano is seen leaving the world of the Jedi behind after she was falsely accused of murder. She loses control of her speeder bike and ends up in the underbelly of Coruscant, a place full of crime, greed, and poverty.

There, she meets a woman named Trace Martez. She’s a spunky character with lots of drive and mechanical skills. She and Ahsoka have a chemistry right away, and they’re obviously going to become great friends.

Ahsoka stays with Trace at her repair shop for a while, working to fix her damaged speeder bike. We learn that Trace is worried about something and desperately wants to leave Coruscant. Ahsoka soon finds out why – there are villains constantly going after Trace and her sister, Rafa. When a few of them confront Trace, Ahsoka shows off her fighting skills and kicks their butts.

Trace is very impressed – it will be interesting when she finds out Ahsoka was once training to become a Jedi. Then comes the most touching moment in the season so far – Ahsoka tells Trace that she learned to fight from her older brother. She obviously misses Anakin.

They then meet with Trace’s aforementioned sister, Rafa. A Twi’lek asks the sisters to build some droids, and Ahsoka assists them. These droids go haywire, and the builders are forced to chase one when it causes mayhem in the city.

Despite Ahsoka’s protests, the dangerous droids are sent to the Twi’lek anyway. The sisters have used the money to settle one of their debts. 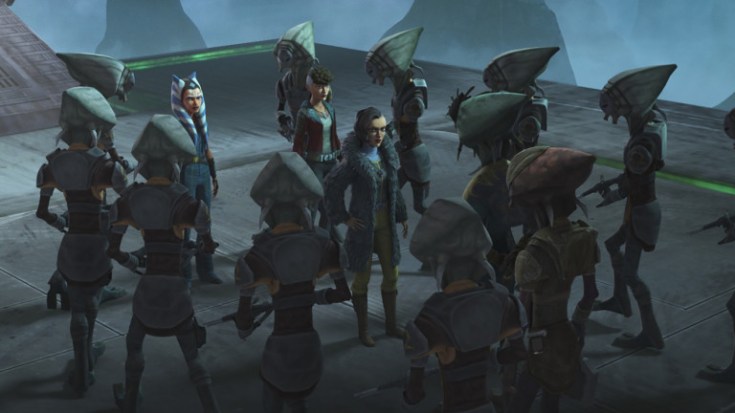 “Deal No Deal” is classic Clone Wars. We get it all – shady deals, imaginative plots, and heroes tricking villains.

Rafa feels responsible for Trace, but she always ends up doing crazy schemes to make money. One of these schemes is about to get them into serious trouble.

The three of them take Trace’s ship, the Silver Angel, off the planet to start the job. Before they leave, Trace flies into a restricted military lane. The Republic military threatened to arrest them, but Anakin is on the orbiting Star Destroyer. It’s implied that he senses Ahsoka’s location on the Silver Angel, and he allows them to fly away.

They arrive on Kessel. Their job is to transport Spice, a raw material with multiple purposes – including as drugs and weapons. Ahsoka is against the idea from the start, but their employer tells them the spice will be used as medicine. Against Ahsoka’s judgment, they go through with the plan anyway.

As they fly to retrieve the spice from another part of the planet, they see thousands of slaves working in the mines. When Rafa says that the Republic would shut down the operation if they knew about it, Ahsoka says “You’d think they would.” Her character is evolving, moving further and further away from her belief in the Republic’s purity.

The Silver Angel picks up the spice. Trace and Ahsoka learn that Rafa has agreed to transport it to the Pyke Syndicate. Ahsoka is emphatic about the dangers of associating with known criminals, but Rafa wants to complete the job to pay off the rest of her debts.

During the argument, Trace dumps the spice, fearing that the Pykes will steal her ship if they go through with the deal. But obviously, this was a bad decision – the Pykes will be royally pissed.

Now owing the Pykes, the sisters follow Ahsoka’s new plan. The former Jedi decides they should deliver the empty canisters to the Syndicate. Ahsoka uses her Jedi Mind Trick to convince the Pykes to let them go before opening the cargo.

The plan almost succeeds. They get back on the Silver Angel just as the Pykes open the crates. The ship flies away, but is then trapped by the Syndicate’s tractor beams.

Clearly, Ahsoka and her new friends are up a creek without a paddle. We’ll see what happens next when Episode 7 airs on April 3rd.

What do you think of the new Clone Wars season on Disney+? Let us know in the comments, and Let Your Geek Sideshow.