Final Fantasy VII. Just saying the title of the game evokes nostalgic imagery in the mind of anyone who has played it. Cloud looking up at the towering Shinra building from the grimy Midgar city streets. Tifa sitting on a water tower, staring up at the starry sky and wondering just where her life will take her. Aerith kneeling in the temple of the Forgotten City, praying for a way to save the planet from destruction. Sephiroth, bathed in the fire of a burning village, staring directly at the player through the fourth wall.

It was a game that touched the hearts and minds of millions of gamers, changing their very perception of what a video game could be. And with good reason — Final Fantasy VII came out at a pivotal moment in video game history. Nintendo and Sega’s longtime rivalry for game console dominance had a new challenger with Sony releasing its epic first system, the Playstation, globally in 1995. To up the ante, two years after the console launch, publisher Square (known now as Square Enix) released Final Fantasy VII as the Playstation’s newest “killer app.”

But this was Final Fantasy VII, right? There were six very successful games in the series before this one. Surely, it couldn’t have been that drastic a change from the previous titles. Little did everyone know that it would be a literal game-changer, and one that would affect all future Final Fantasy titles (and some would say all video games) going forward. The previous six Final Fantasy games had all been exclusive for the original Nintendo Entertainment System (NES) and the Super Nintendo. And while those games are all fantastic in their own right (Final Fantasy VI, in particular, is a masterpiece), they were limited to the graphical capabilities of the 8-bit and 16-bit eras.

Moving the series to Sony’s Playstation, the power of the system greatly expanded what Square could do with Final Fantasy VII. Gone were the restrictions of 2D pixels; they were replaced by full 3D polygons for the entire cast of heroes, monsters, and villains. These 3D characters moved around on gorgeously drawn pre-rendered backgrounds. These highly detailed landscapes gave the whole world of the game a sense of depth that just was not possible before. 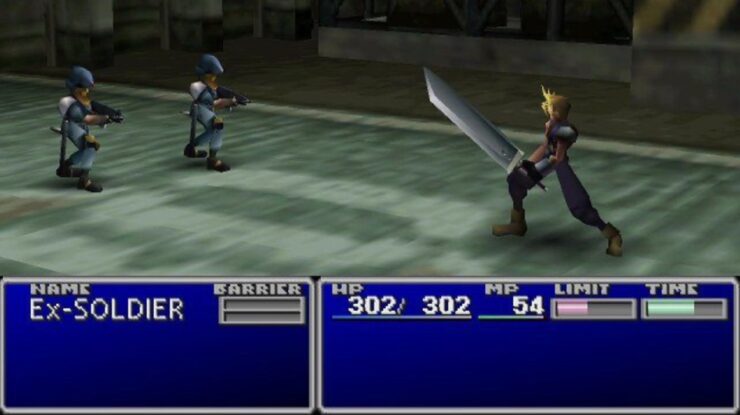 And then there are the battles. No longer limited to the static 2D images, flashing lights, and limited animations of the previous titles, the battles in Final Fantasy VII have a cinematic flair to them. The new 3D battles contained a moving camera, swooping around fully animated characters with a variety of angles for a more dynamic and exciting feel.

If you ask someone who played the game when it was first released about the main appeal of Final Fantasy VII, some would say it was the expansive overall story themes or how the characters were so relatable.

Over the years, Square has taken a lot of pride in just how deep the story and lore is for each Final Fantasy title. This was turned up to eleven with Final Fantasy VII. What starts as a fundamental story of environmentalism versus the greed of man eventually expands to encompass the dramatic themes of life, death, sacrifice, grief, and personal healing. The story illustrates how one man can mentally break with the revelation of a lifelong lie, and how others will always rise up to protect everything they hold dear in the face of armageddon.

In addition to the storyline, you have the main cast. The previous game, Final Fantasy VI, boasted a whopping 14 playable characters, but only about half of them had rich backstories the player could explore. While Final Fantasy VII cut back the roster to nine playable characters, they took the time to fully explore each and every one of them. If players take the time to dig deep enough, even optional characters like Yuffie and Vincent have just as much care put into the nuances of their history as story requisite characters like Barret, Tifa, and Cid.

If the aforementioned story and characters hooked new players, reeling them into loving a JRPG for the very first time, the bait was the overall aesthetic of the game. While the visuals may look a bit dated by today’s standards (over 20 years later), in 1997 this was the near peak of graphic capabilities.

Square went all out with full CGI cut scenes for certain points of the game that were expertly directed to excite the player and make them feel like they were part of a bigger experience. These short films could elicit feelings of joy, shock, or even rain down tears of grief. And this wasn’t limited to just the CGI cut scenes. The entire game takes its time developing the world you are immersed in, to the point where a bit of random dialogue in a battle can change how one feels about a character or situation. The entire game is filled with these little hidden treasures that for many people made Final Fantasy VII just as fun to watch as it was to play.

Final Fantasy VII left such a lasting impression that it became its own franchise outside of the Final Fantasy series as a whole. The original game was followed by a long series of prequel and sequel games, as well as its own cinematic film, Advent Children. But this was not enough to satiate fans, and for years, millions of people begged the developer to remake the game. In 2020 those wishes were finally answered with Final Fantasy VII Remake: Part 1, and many more titles have been hinted at for the future. What is your favorite moment from Final Fantasy VII? Which character do you relate to the most? Let us know in the comments and don’t forget to Let Your Geek Sideshow!