A story is only as powerful as its ability to connect with an audience. We love to feel like we’re the heroes and see pieces of ourselves in the extraordinary characters on screens and in books. That’s why representation is such a vital tool for audiences to connect with these stories. A wider variety of identities and experiences means a greater chance for connection.

DC Comics has developed a roster of Native and Indigenous heroes from numerous nations. Some inhabit Prime Earth while others are from alternate realities, like the Native Green Arrow of Earth-D or the Navajo Raven of Earth-1. A few, like the Pre-Apache Manitou Dawn and Manitou Raven, have also fought alongside (and against) the Justice League.

We’ve even started seeing prominent on-screen representation with Tye Longshadow in Young Justice. In honor of these heroes, here are some Native and Indigenous DC characters whose stories are striking and powerful. 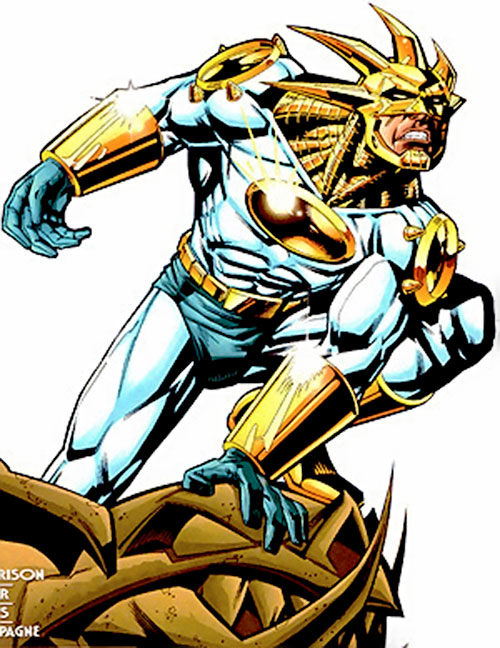 Long before any modern super heroes appeared, the Aztec gods Quetzalcoatl and Tezcatlipoca engaged in a bitter feud of light and shadow. Based on figures from the Aztec pantheon, Quetzalcoatl, with his solar powers and control of the wind, kept the shadows of Tezcatlipoca at bay. Now, his legacy continues with those who wear the feathered serpent god’s battle helmet.

Over the years, various people have been chosen to wear the helmet. First, a man named Uno (alias Curt Falconer) was chosen by the Q Society, who safeguard the helmet. Most recently, Nayeli Constant holds the title of Aztek. With the helmet, Aztek can fly, manipulate energy, turn invisible, and call upon the shared memories of all Quetzalcoatl’s chosen heroes. 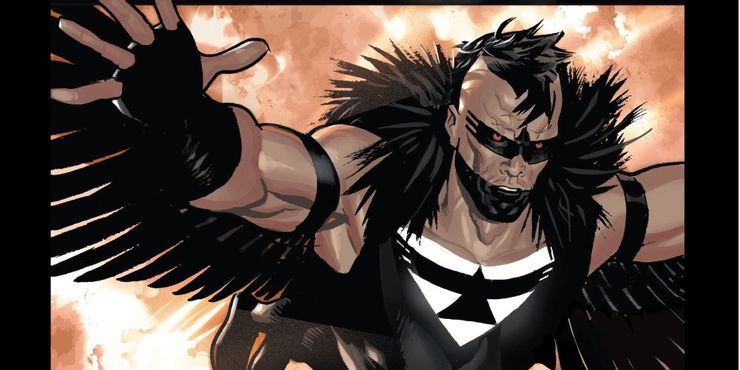 Though there have been other Black Condors who are part of the Freedom Fighters, the current Black Condor is a Navajo man named John Trujillo. John was granted his powers by Tocotl, a Mayan spider goddess, and as the Black Condor he is a champion of the earth and sky.

Impressive feathered wings sprout from his shoulders to give him flight. He draws upon his connection to the earth for super strength and he also possesses aerokinesis which he uses to control the winds. John is a solemn hero but fights valiantly to protect those in need. 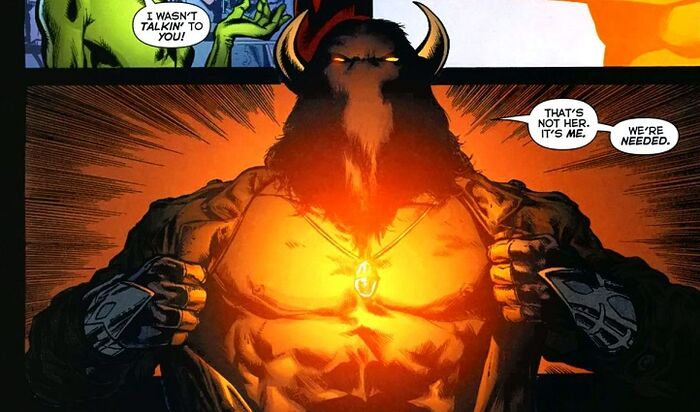 Over seven hundred years ago, a member of the Haudenosaunee Confederacy named Flying Stag discovered a meteorite amulet that allowed him to access the powers of Manitou. (It’s important to note that “Manitou” is a word from the Algonqiuan language, not the Iroquois spoken by Flying Stag.) Flying Stag then created the identity of Saganowahna, or Super-Chief, a buffalo-masked hero whose powers granted him “the strength of a thousand bears, speed that surpasses the fastest of the deer, and jumping prowess that surpasses those of the wolf.”

He is recognized as America’s first super hero. Over time, Flying Stag would be succeeded by a villainous Saganowahna as well as his direct descendant, Jon Standing Bear. 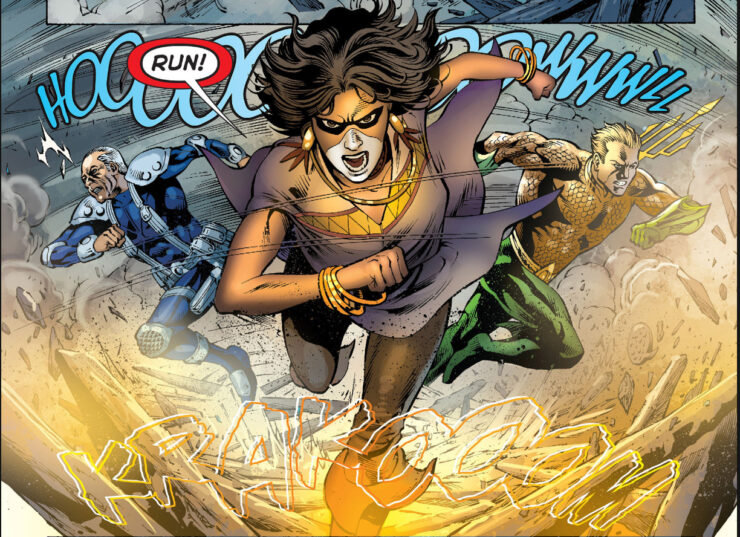 Sky Alchesay is an Apache woman who can communicate with the dead — especially her mother, who was murdered by Sky’s villainous uncle, Skinwalker. Using her ability to communicate with those who have passed on, Sky has access to a wealth of rare knowledge.

This ends up making her a valuable member of Aquaman’s outcast team known as the Others as they search for ancient hidden relics. Sky also has the ability to transport herself and others using portals through her connection to the Ghost Lands. 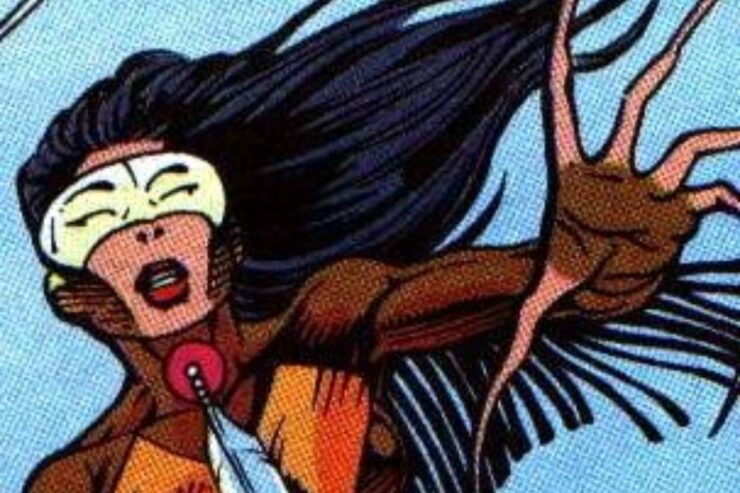 Wenonah Littlebird is a Cherokee woman who defended her community and gained recognition as a powerful force of good, which led to her recruitment to the Global Guardians. This team was charged with defending the planet against major threats, using representatives from many sections of the globe. As Owlwoman, Wenonah was the only American representative on the team.

Later, she and Jack O’Lantern (with whom she also became romantically involved) were brainwashed by Queen Bee to dismantle the Global Guardians. Since then, she has been busy rebuilding the team. Her powers include gliding along the wind currents, the enhanced nocturnal senses of the owl, and steel-sharp claws given to her by Queen Bee. 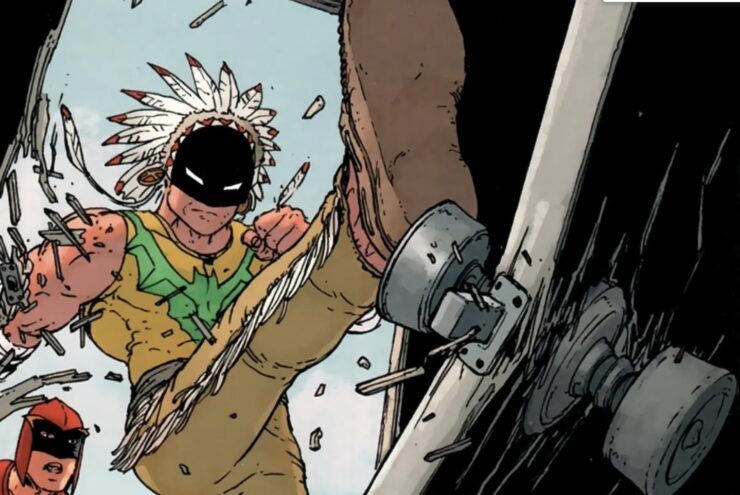 William Great Eagle of the South Dakota Sioux was inspired by Batman to fight crime in his community, and thus he began his career as Man-of-Bats, a compassionate leader dedicated to helping his people. Alongside his son, first known as Little Raven then later as Raven Red, Man-of-Bats has aided Batman in many adventures.

He is a skilled fighter and equestrian but he also has great talent with medicine, and his work as a physician has proved invaluable among his allies and community. Man-of-Bats has now returned as part of Batman Incorporated, led by Ghost-Maker. 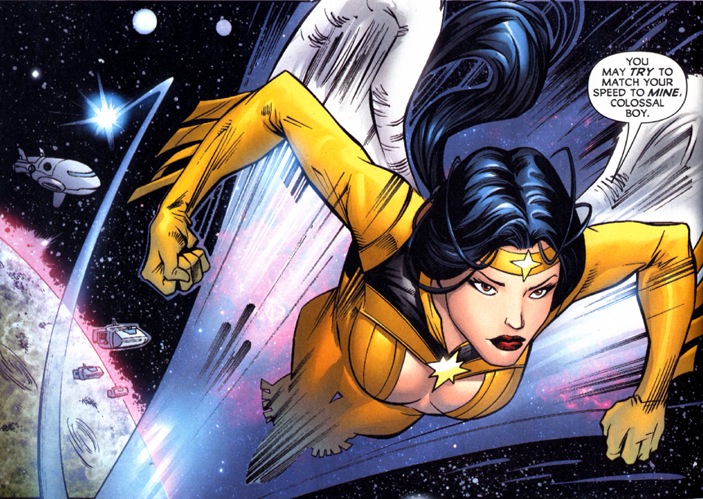 Dawnstar’s story is unique among her Native contemporaries — she is descended from Ancestral Puebloans but her homeworld is a planet called Starhaven. In the 13th century, Puebloan people were abducted by aliens and brought to a planet in the center of the Milky Way, which they would come to call Starhaven.

Here, their captors performed genetic experimentation (it would seem colonizer cruelty is a galactic commonality) and the inhabitants of Starhaven came to possess large feathered wings. The people of Starhaven developed the ability to fly through space on their wings but Dawnstar also possessed a mutation that gave her interstellar tracking abilities. With all of these powers and her heroic nature, she became a member of the Legion of Super-Heroes. 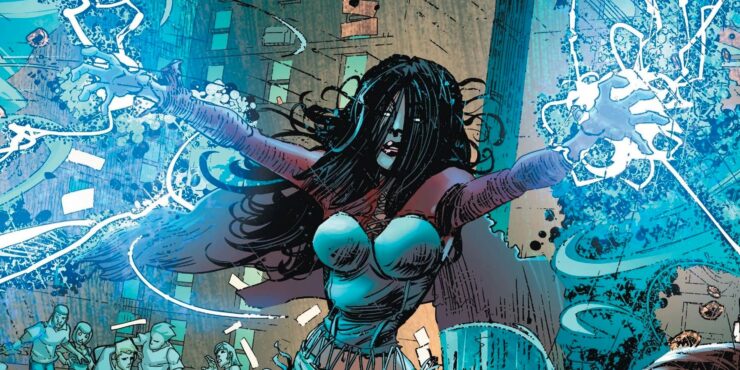 Hailing from the Wildstorm Universe, where metahumans do not have to hide, Sarah Rainmaker is a member of Gen-13. This team consists of super human teenagers who fight against unjust authorities. She is based in Coral City and has also helped assist The Movement.

Rainmaker was raised by her mother on the San Carlos Apache Reservation and her powers enable her to manipulate the weather in vastly impressive ways. She and her team have grown incredibly close, especially after she came out as bisexual. 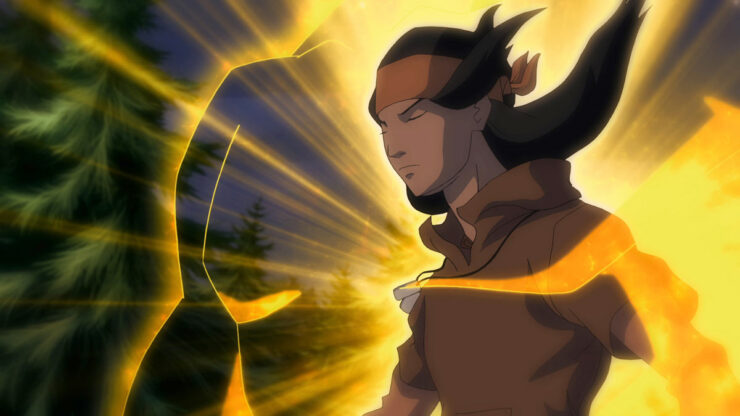 The title of Apache Chief has belonged to multiple heroes, with his first appearance in a 1977 episode of Super Friends. This debut, while well-intentioned, only introduced a flat character, with little development as a person outside of his powers. For genuine representation, DC eventually did better as this character has been further developed on television. Long Shadow is an ally of the Justice League and Tye Longshadow (who would appear to be a younger version) joins the Young Justice team.

Both of these versions show him to be extremely loyal to those who earn his trust. His power allows him to amplify his size so that he towers above buildings and to project an astral form with super strength and durability. Tye is also best friends with Jaime Reyes, AKA Blue Beetle. 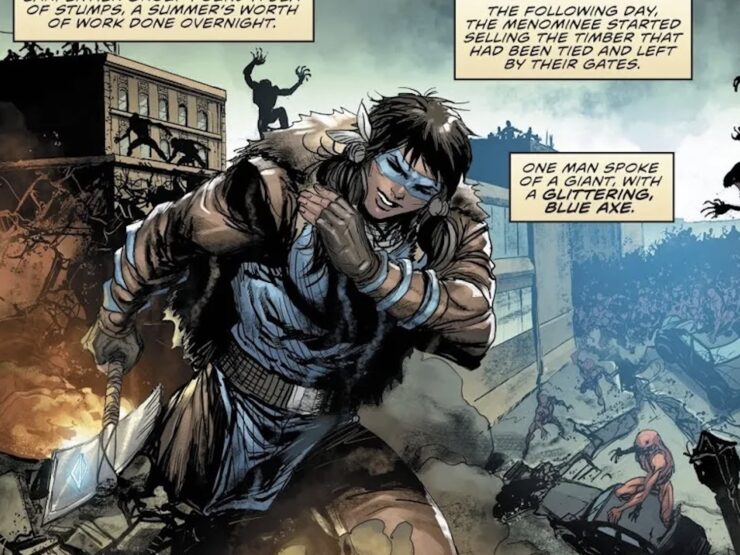 Similar to Tye Longshadow, the hero known as Timber uses size manipulation to grow to titanic proportions. However, Timber’s origin story also confronts the discrimination that the Native community has always faced since settlers invaded their lands. Keshena Carpentier is born to a Native father and a white mother. Her maternal grandfather, angry at this union, punishes Keshena’s Menominee tribe by destroying their timber.

To save her community’s primary source of income, Timber cuts down a whole forest, initiating her ongoing battle against oppression and those who would marginalize others. With her tall stature and mighty blue axe, her heroics are the stuff of legendary tales.

In a world where systems are slow to change, the victory of representation can feel like a hard-won battle. When our identities and experiences are reflected on the big screens or across the inked panels, our stories grow stronger and so do we. Here’s to more representation.

Which Native or Indigenous DC hero stands out to you? Who did we miss? Connect with other DC fans in our Local Comics Society Facebook Group, and don’t forget to Let Your Geek Sideshow!