Marvel’s Eternals (2021) introduced a whole host of new characters to the MCU, including the group of immortal beings for which the film is named. But one special newcomer was not a passenger on their ship, the Domo, and that’s Dane Whitman, the Black Knight.

A skilled swordsman with a complicated history in Marvel comics, Dane Whitman (played by Kit Harington from Game of Thrones and How To Train Your Dragon) made his onscreen debut as the charming love interest of Sersi (played by Gemma Chan, from Captain Marvel and Raya and the Last Dragon). But there’s a lot more to this man than dashing looks and poetry. Below, let’s dive in to the history of the Black Knight and his cursed blade.

Dane Whitman in the MCU

Dane Whitman and Sersi in Eternals

In Eternals, Dane Whitman is Sersi’s English boyfriend. A mere human, he’s astounded by Sersi’s revelation that she is an Eternal, and does not tag along for the fight to save humanity from the Celestial Emergence. Although he helps get civilians out of harm’s way during the first Deviant attack in London, Dane is clearly not fit for action — as show by a comical moment when he chooses to take the stairs instead of parkouring up the side of a building with Sprite.

Sersi leaves Dane behind in her fight to save the world from the Eternals. But he is not absent from the film. At Druig’s commune, Sersi videochats Dane and tells him to reconcile with his estranged uncle. Indeed, most of Dane’s scenes involve some sort of reference toward his extended family, from Sersi gifting him a ring bearing his family crest to this sly mention of Nathan Garrett, an infamous Marvel villain.

Dane Whitman’s shining moments come in the final act as well as the post-credits scene. In the film’s finale, Dane and Sersi walk in a park and Dane asks, “You know how we said no more secrets?” Sersi assures him she has none left, but Dane goes on to explain he has a complicated family history. Before he can divulge more of these tantalizing details, Sersi is whisked away by Arishem for judgement.

Finally, the post-credits scene, the moment to make audiences gasp and cheer. Dane Whitman anxiously approaches a chest containing an ancient sword. We’re probably meant to assume Dane reached out to his uncle, and like in the comics, Nathan bequeathed the blade unto his nephew as a bid for redemption. On the box’s inside lid is a Latin phrase which Dane translates to Death is my reward. When he puts his hand near the sword, the silver slivers that aren’t wrapped ripple like water and unintelligible whispers crescendo. “I’m sorry,” Dane murmurs, “but I have to try.” Nervously, he brings his fingers closer to the sword.

But a single offscreen voice stops him — Blade (played by Mahershala Ali of Moonlight and Spider-Man: Into the Spider-Verse), the vampire-hunting dhampir, asks if Dane is ready. You might be wondering, ready for what? Well, let’s speculate the rest of Dane Whitman’s MCU involvement based on his history in the comics and his complicated family. 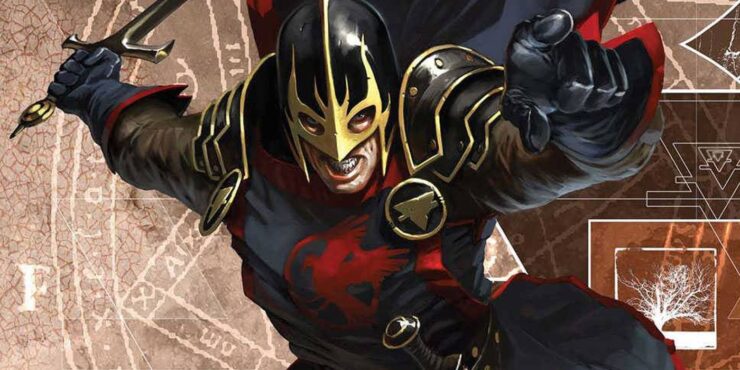 The original Black Knight was Sir Percy of Scandia. A character from Arthurian legend, he was a hero and has since appeared as a spirit to choose his worthy successors. He rejects his descendent, Nathan Garret, although the man still wields the sword and fights against Marvel heroes. Then, in the comics, Dane Whitman inherits the mantle from his uncle after Nathan is mortally wounded during a battle with Iron Man.

The Avengers don’t trust Dane at first. Despite successful and heroic deeds done in the name of them, the Defenders, and Luke Cage’s Heroes for Hire, Dane is still looked upon with some suspicion because of his uncle. It is not until he helps Earth’s Mightiest Heroes defeat Kang the Conquerer that they finally accept Dane. With the introduction of Kang as the next Big Bad of the MCU, could this be Dane’s connection to the wider universe? Or will his first task be more closely connected to the Eternals and Blade?

All of the character’s complex comic storylines converge into one idea: This could be a fake Ebony Blade that we’re first seeing. In the comics, Dane’s been given a stone heart by Sersi — not too far out of the realm of possibility with her newfound ability to manipulate inanimate and animate matter — and is also wielding a fake blade created by Dracula. And since Blade was first introduced in Dracula comics, there’s further hinting that Dane might need to search for the real Ebony Blade. So… it’s a flimsy theory, but a a theory nonetheless. At least we’re seeing some connective tissue as we move further into Phase Four.

The Ebony Blade was forged by Sir Percy and the famed wizard Merlin. They made it out of a Starstone meteorite, a metal so strong that it can withstand Wolverine’s Adamantium claws. The magical sword is black as night, cooled by sacred blood, and the most formidable weapon of its time. The Ebony Blade is also enchanted to slice through any object, to prevent the death of its wielder (always a man from Sir Percy’s bloodline), and to repel magic — but it also carries a curse that corrupts its user, causing bloodlust and eventual death. It is rumored that only the impure of heart may wield it, as its power is driven by negative emotions.

Because of the blade’s curse, Dane struggles with his morality quite often in the comics. He wants to do good, but the Ebony Blade leads even the most well intentioned users astray. When the sword claims a life, it begins to physically bond with a user, making the two extensions of each other. Once this happens, insanity and an insatiable thirst for violence are inseparable from the user’s mind, especially if they continue to fight with the Ebony Blade in hand.

In the most recent Marvel Comics run, Dane Whitman is decapitated yet in the same issue resurrected by the Ebony Blade. Their connection is that strong — and also that dangerous.

Are you looking forward to more of the Black Knight in the Marvel Cinematic Universe? Let us know in the comments, and don’t forget to Let Your Geek Sideshow!